I liked the image of a pipeline carrying cold beer from the Miller Valley to the Summerfest grounds, but it turns out Miller's tank beer - available in the new Miller Brew House - doesn't exactly work like that.

Personally, I kind of liked the image of a pipeline carrying cold beer from the Miller Valley to the Summerfest grounds, where the simple twist of a valve wheel could tap Miller Lite fresh from the brewery tanks.

But it turns out Miller’s tank beer – available in the new Miller Brew House, which was constructed as part of the revamping of the Miller Lite Oasis area on the grounds this year – doesn’t exactly work like that.

Tanks are filled at the brewery and trucked over to the festival. Despite the lack of pipeline and faucet, this is surely still the freshest beer on the grounds. When Summerfest opened at noon on Wednesday, June 28, the beer had arrived from State Street – 5.5 miles away – that very morning. 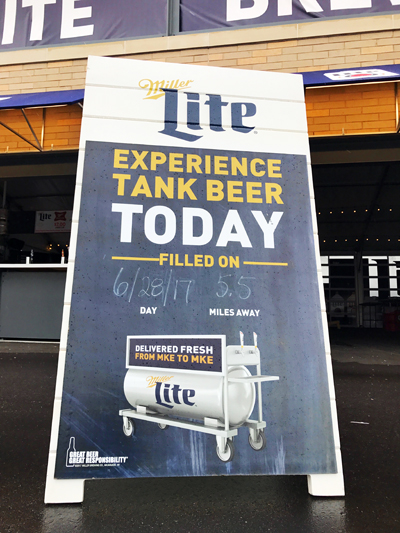 A sign out front is updated to show when the beer currently on tap arrived from the brewery. The photo at the right was taken moments before Summerfest opened on Day 1 last Wednesday.

According to Matt Schmidt, Miller Brewing’s senior marketing manager, there are two tanks – a 66-gallon (528 pints) one and 132-gallon (1,056 pints) one – and each will have been filled and delivered to the grounds at least twice during the Big Gig.

The self-contained tanks each have their own chiller and air compressor.

"The response has been really positive," Schmidt says. "Most people have had fun with it. Customers are seeking it out on the grounds. (Thursday) we had the 66-gallon tank there at noon and it was empty by early evening."

The cost of this Miller Lite is $7 a cup. The beer is available only in the Brew House, which is that brick building with the tented roof on the north side of the Miller Lite Oasis.

"People are saying they can taste the difference," says Schmidt. "It tastes crisper; it feels crisper."

Tank beer is a popular phenomenon in brewing these days and it’s not a new concept for Miller, which has offered it in the past – for example, in the U.K. when its Czech Pilsner Urquell brand got a 17 percent boost in sales during 2013 thanks to what The Independent called, "a record July and huge enthusiasm for its unpasteurised tank beer following a trial over the summer."

The paper quoted an SAB spokesman as saying "The early success of unpasteurised Pilsner Urquell in the U.K. underpins our belief that consumers are looking for authenticity and differentiation in the beers they drink." 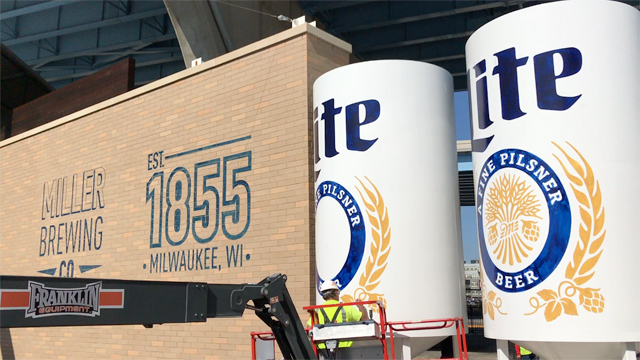 A painter puts the finishing touches on the Miller Lite Oasis beer tanks (for display only, they hold no beer)
before the opening of Summerfest 50.

The Miller Lite tank beer at Summerfest is exactly the same product as what is put into cans and bottles and barrels at the brewery, except, says Miller Trade Brewer Megan Mares, "The beer that is in the tank is not pasteurized, typically bottles and cans are pasteurized but kegs are not."

"Some people have said it tastes different," says Schmidt, and the difference surely comes from how quickly after brewing the beer is being tasted, adds Mares.

"I think that the speed that the beer arrives to the Summerfest grounds absolutely makes a difference," Mares says. "There are higher fruit esters as well as slightly elevated hop notes, overall the beer is brighter and more vibrant."

According to Schmidt, the tank beer was road tested before Summerfest at two Milwaukee-area sites, and it’s an idea that has not gone flat.

"We tested it at a couple places – South Shore Beer Garden and then Hart Park. We plan to look at additional events and bar locations that fit the profile of what we’re trying to do with this. It doesn’t live and die with Summerfest."

Mares is excited about the tank beer idea, in part because it reinforces the relationship between the brewer and its birthplace.

"This is such a cool concept to have beer right from the tanks to the grounds in less than a day," she says. "I think it drives home the fact that we have one of the best American light lagers brewed right down the street from us."

8 Summerfest acts that you didn't know that you know

Catching up with Midge Ure, who plays Summerfest on Friday