The energy, the buzz, the excitement, the music! Here are OnMilwaukee co-founder and president Jeff Sherman's daily picks for Summerfest 50.

Summerfest. There's nothing like it. It's ours, it's Milwaukee's and, while it's all about the music, it's also so much more. But you're going to Henry Maier Festival Park to sing, dance and rock out; so if you want to do those things with me, here's where I'll be.

Our tastes may not be the same, but that's OK. It's Summerfest, baby, and we're all in this together. See you there.

For me, the fest opens with "Sunshine and Whiskey" from Frankie Ballard. He headlines the U.S. Cellular Connections Stage at 10 p.m. Before that, I’ll have the pleasure of attending the opening ceremony with my lovely wife and many from the OnMilwaukee team. Summerfest is the best time of the year, and it’s a true honor for us to be passionate partners of this great event. By the way, download our new Summerfest stickers here.

I have never seen Luke Bryan and love opener Brothers Osborne. So I’ll be at the Amp tonight. Can’t wait to sing along (and shed a tear) to Bryan’s "Drink a Beer" and truly can’t wait to see how Brothers Osbourne handle the opening set. "Let’s Go There," "Rum" and "Stay a Little Longer" are all great tunes. Otherwise, 5 Card Studs and Toto at the BMO Harris Pavilion are great back-to-back acts, too. They play at 8 and 9:45 p.m., respectively. This is a solid day, so there's more on my plate. Willy Porter’s on at 6:30 p.m. at Uline; and Guster, a Summerfest mainstay, takes the 10 p.m. slot at that stage, after Allen Stone. Oh, and Hanson’s at 10 p.m. too at U.S. Cellular.

Good night at the new Miller Lite Oasis. Barns Courtney at 8 p.m. and Jon Bellion at 10:15 p.m. But the country boy in me will be at Jerrod Niemann’s 10 p.m. gig at the U.S. Cellular Stage. "Lover, Lover" is a perfect Summerfest sing-a-long song! I love the Paul Simon booking, but I’ve seen him and want to keep that memory intact. Finally, I’ll be certain to check out Walker Hayes at 6 p.m. at the U.S. Cellular Stage. You should, too.

I’ve seen Zac Brown many times, so I’m skipping this year. I’ll head to the Oasis for the indie sounds of Flint Eastwood (7 p.m.) and then, just because it’s always way better than you remember, I'm going to hit the Gruber Law Sports Zone for the evening show from the Division BMX Stunt Team. These riders always bring their "A" game to Summerfest. Under the lights, it’s super cool. 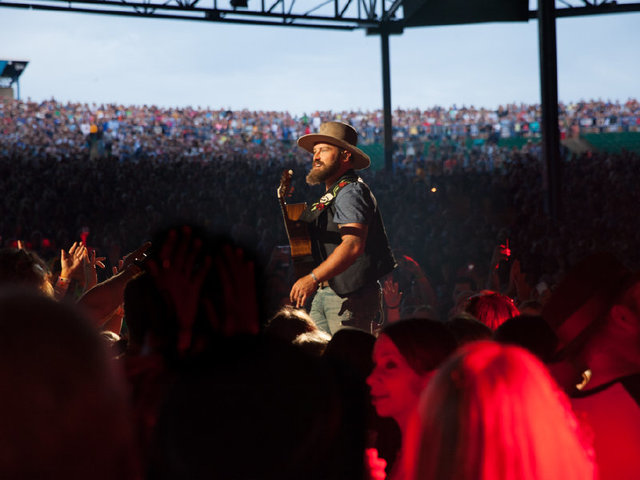 P!nk brings her first North American concert in three years to the Amp tonight. Saw her several years ago on a side stage; she’s awesome. Other highlights? Andy Grammer should be great at the Big Backyard (10 p.m.), while Car Seat Headrest headlines the World Sound Stage at the same time. Very interested to hear them live. And, if you’re here during the day, Marquette basketball does two "shows" at noon and 1:30 p.m. Get primed for the season!

Jamila Woods does a 5 p.m. show at the Roadhouse. Chicago soul and Chance the Rapper collaborator, she's a must-see. High Valley headlines the U.S. Cellular Connection Stage at 10 p.m. The Canadian country duo (they’re brothers) scored big with their hit "Make You Mine," and more recently moved up the country charts with "She’s with Me." Keep it local, too, and don't miss IshDARR at 10 p.m. at the Big Backyard.

For the 5th, get your Bucks and Admirals fix on from noon to 6 p.m. at the Sports Zone. Hit Eric Lindell at the BMO at 8 p.m. and finish with PnB Rock at 8:30 at the Oasis.

Milwaukee’s own The Booze Brothers bring afternoon dancing to the BMO at 2:30 p.m. Then, it’s country for the rest of the day at U.S. Cellular. Tucker Beathard, at 8 p.m., has made a name for himself, but his dad – Casey Beathard – wrote Kenny Chesney's "Don't Blink" and Eric Church's "Homeboy." William Michael Morgan follows and headlines.  Finally, don't miss Lex Allen at the World Stage.  Lex is doing big things in town, musically and on the civic front.

For me, Aubrie Sellers (8 p.m. at Briggs), Phil Vasser (10 p.m. at Briggs) and for sure the Amp show that features Dierks Bentley, Cole Swindell and Jon Pardi.

Summerfest 50 wraps up today. See Harvey Scales at 8 p.m. at Uline and then hit Lee Brice at the Miller Lite Oasis at 10 p.m. Nora Collins – who last year I said deserved a better stage and slot – gets it, as she opens for Brice at 8 p.m. She is great.

Until next year, cheers Milwaukee and THANK YOU, Summerfest.