The Church perseveres despite sound issues

Australian rock band The Church booked a show at Summerfest and later added seven more shows to make the jaunt over the pond worth the trip. The tour kicked off last night in Ann Arbor and they played the Uline Stage today at 5 p.m.

In the ‘90s I wore out my cassette tape of "Starfish" by The Church and wondered if – almost 30 years later – the band would be worn out, too. Nope.

The Australian rock band booked a show at Summerfest and later added seven more gigs to make the jaunt over the pond worth the trip. The tour kicked off last night in Ann Arbor and they played the Uline Stage today at 5 p.m.

Kilbey looked and sounded great. After a decade of heroin addiction, Kilbey – who is the father of five daughters – rarely drinks, swims daily and has a vegetarian diet. And it shows. He's vibrant, graceful and stylish. Today he wore a colorful dress shirt with black pants, vest and shades. 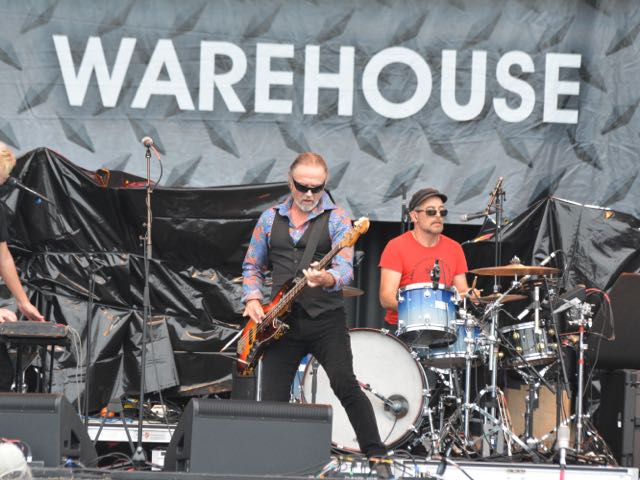 His approach to music reflects his life changes and comes across as less trippy, dreamy pop, and more driving and rock oriented. In 2014, he wrote a memoir called "Something Quite Peculiar," and he described himself as "a sadder yet wiser person."

His heavy Australian drawl (which, interestingly, was much more prevalent live than on the studio albums), dramatic bows after songs and ongoing gratitude toward the crowd made him even more of an attractive showman.

"You have many entertainment choices here," he says. "Thank you for choosing us."

His cynicism also came out at times. When he saw banners behind planes for RumChata and Trojans he said, "I can’t wait to drink rum and wear condoms" which he said before playing "Under the Milky Way," adding, "This song is a car advertisement." (Sia covered the song for a Lincoln commercial.)

Although the band released a new single, "Another Century," and is working on new material, it was a nostalgic performance comprised of 14 songs, many of which were off "Starfish."

The nostalgia element is also why fans – mostly white, "'80s alternative" and middle aged (so many pairs of Converse!) – were extremely supportive and clearly having a good time even though sound and monitor issues came in and out during the entire hour. (It was rumored that the band opted to use their own sound people instead of Summerfest’s sound staff.)

And yet, The Church was tight and really showed off their musical chops with extended versions of "You Took" and the final number, "Miami." Their setlist was also very different from the show they played in Ann Arbor last night, which further expressed they were in it for more than a paycheck.

The final minutes of the concert were a bit perplexing. Kilbey abruptly walked off the stage, and the stage workers started to dismantle the drum kit before the final song was over. But as a fan said to me on the way out, "None of that mattered. It was a great show. The band’s still got it.’"

Salford Lads Club, a Smiths tribute band, opened the show. Lead singer Marc Solheim – who takes on the role of lead singer Morrissey – was more comfortable and believable than ever as the magical, miserable Moz.

"Under the Milky Way" by The Church:

The Church "Under the Milky Way."