With an ever-present grin and superstar-showman stage moves, Luke Bryan pounded through his 90-minute set at the Amp like he pounds cases of beer during a highly charged, power-packed, fun-filled and playfully exuberant performance Thursday night.

That was the review of Luke Bryan’s Summerfest show offered by 22-year-old Amanda, the girl standing, singing and shaking it ("Country Girl"-style) next to me at the Marcus Amphitheater, when I asked afterward what she thought of the concert.

And it’s as accurate and eloquent a critical assessment as is needed to describe Bryan’s act on Thursday night. But, for the sake of journalistic diligence, I’ll try and elaborate.

Wearing skintight jeans, a white t-shirt and a black baseball cap he continually switched from forward to backward to slick back his hair, with an ever-present grin and the superstar-showman stage moves that have made him a two-time Country Music Association Entertainer of the Year, Bryan pounded through his 90-minute set like he pounds cases of beer, giving a highly charged, power-packed, fun-filled and playfully exuberant performance.

Irresistibly charismatic and endearingly fratty, Bryan gave the capacity crowd everything it wanted Thursday night. He played his hits (opening with "Rain Is a Good Thing") and wiggled his hips (eliciting ecstatic screams from his cowboy boot-wearing admirers). He strutted and spun, flipped his mic behind his back and flirted with the audience ("You’re coming on the road with me, Milwaukee"). He high-fived front-row fans, signed autographs mid-song, pointed and fist-pumped and ended songs by miming a baseball swing. He caught and chugged Miller Lites from a cooler on the catwalk and tossed cans into the swaying, surging mob, with its hands – and cell phones – held adoringly in the air. And all the while flashing megawatt smiles, as the bass bumped and laser lights bounded around the Marcus. 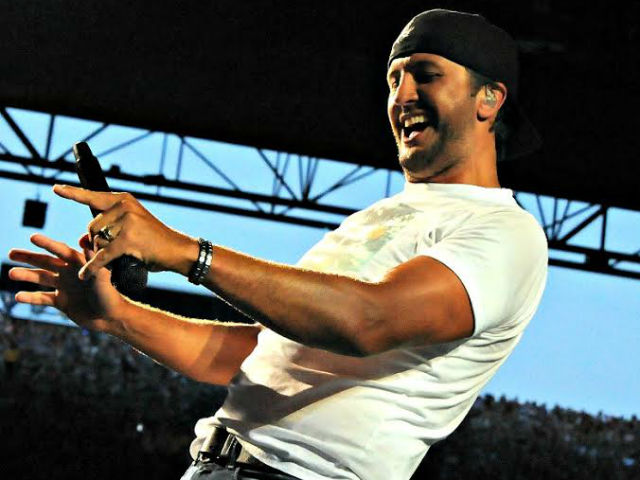 "I love this guy; he always puts on a great show," said Todd Wilkins, a regional sales director for a digital marketing company who lives in Lake Geneva. Wilkins, whose Cubs hat likewise turned from forwards to backwards once the show started, said beforehand he’d seen Bryan numerous times.

"So far, so good. So good! There’s your article," said Tammy, who said she saw fellow country stars Blake Shelton and Tim McGraw last week. "This is by far the best."

Before Summerfest began, I urged Milwaukeeans to #FestHarder, which was a dumb and nebulous call to action. But despite the meaninglessness of that hashtag, Bryan and his bouncing bro party pretty much exemplified whatever it is. The man who’s placed 15 singles at No. 1 and sold nearly eight million albums barely took a breath during his 19-song set – except to drink beers and thank the crowd "from the bottom of my heart for selling this place out on a Thursday night."

Bryan didn’t waste much more time on audience banter, except to tell one twang-fried tale about how he spent the recent Fourth of July break during his "Kill the Lights" tour, and which partly explained why he was so lively and rambunctious. 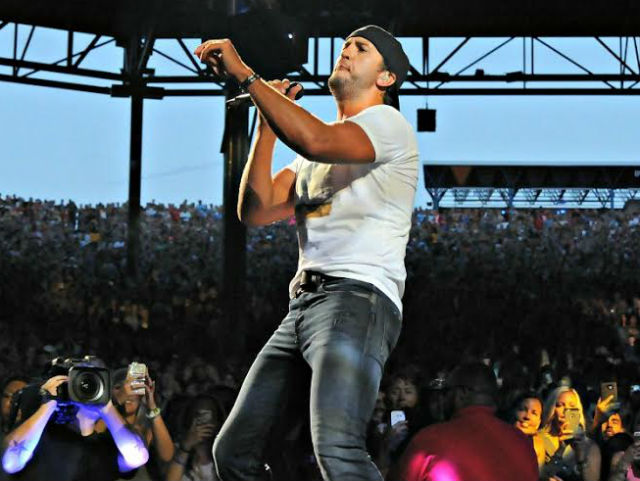 "I had eight days off," he said after finishing 2015’s "Move" with some enthusiastic butt shakes, "and I drank a case of beer every damn day. And I caught two cases of fish every day. So I’d drink a beer and catch two fish – you know how it goes."

Bryan then did two popular crowd-pleasers, "Crash My Party" and "Play It Again," from his commercially successful 2013 album of the former’s name. And when he launched into the storytelling ballad "Roller Coaster," about a man and a woman who meet on vacation, while the video played on the big screen, this (usually sports) reporter abandoned all pretense of objectivity – in most team press boxes, cheering is forbidden – and started dancing and singing and then soon cheering.

A couple songs later, during "Play Something Country," talented opener Frankie Ballard joined Bryan and his six-man band onstage. The two sang together, swapped hats, hugged and then the headliner threw Ballard’s bowler back to him, landing it perfectly on the up-and-comer’s head.

There was another funny moment when Bryan was performing "All My Friends Say." Someone in the pit lobbed him one of those stupid, beige, adjustable Brewers caps the team gives away for free, and Bryan wore it facing forward on top of his backwards black hat, drawing a huge cheer from the no-doubt rebuild-loving Milwaukee baseball fans in attendance. Anyways, it was cool.

After asking the crowd to hold their phones up – with the Amphitheater lights turned off – and sing along to "Drink a Beer," Bryan did a duet with the audience in "Home Alone Tonight," a post-breakup drunk hookup track he recorded with Karen Fairchild and needed some help on for her part. Bryan's vocals aren't the best in the business, but his voice has an enjoyable gravyness to it that makes the music accessible – country enough, to be sure, but without too much of the honk or the tonk.

Fittingly, Bryan finished his regular set with "I Don’t Want This Night To End," telling the assembled, "I don’t want this Summerfest to end." And, after briefly departing stage, Bryan returned for an encore with "Country Girl (Shake It For Me)."

Ever the showman, he concluded the night his way: by throwing his mic to a stagehand, catching a tossed beer with one hand, taking a swig, spraying his fans and chucking it into the crowd, taking someone’s phone and snapping a selfie, catching another beer, drinking, spraying, chucking and then walking triumphantly off stage. 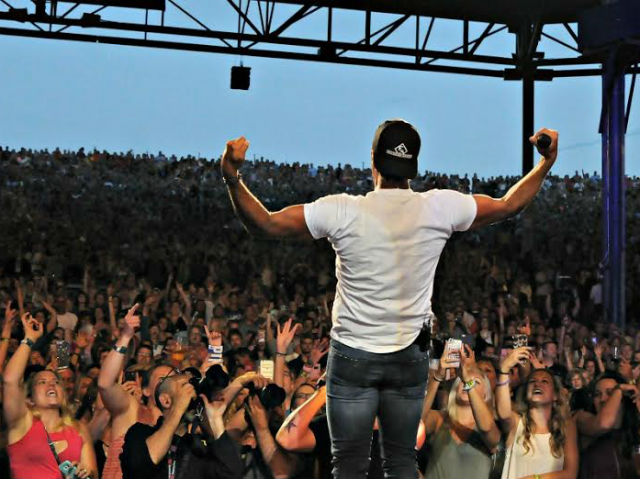 "Rain Is a Good Thing"
"Kick the Dust Up"
"I See You"
"This Is How We Roll"
"Drunk On You"
"Kiss Tomorrow Goodbye"
"Move"
"Crash My Party"
"Play It Again"
"Roller Coaster"
"Strip It Down"
"Play Something Country"
"All My Friends Say"
"Huntin', Fishin' and Lovin' Every Day"
"Drink a Beer"
"Home Alone Tonight"
"That's My Kind of Night"
"I Don't Want This Night to End"

"Country Girl (Shake It For Me)"