One of the newest breweries in Milwaukee is Bay Viewï¿½TMs Supermoon Beer Company, headquartered in a 1902 grocery store building at 3145 S. Howell Ave. in Bay View.

One of the newest breweries in Milwaukee is Bay View’s Supermoon Beer Company, headquartered in a 1902 grocery store building at 3145 S. Howell Ave. in Bay View.

Founded by Rob Brennan, Supermoon plans to focus on two ends of the brewing spectrum. On one hand, he says he wants to make traditional beers that "taste like beer" and on the other hand he’s working on mixed fermentation brews.

Brennan, 35, fell in love with brewing while a student at Marquette, where he met his wife Maria Keegan, who is from Appleton. Later, they moved to Chicago and Brennan worked at Penrose Brewing in Geneva.

Falling in love with Bay View after visiting his in-laws, who live there, Brennan and Keegan moved back to Milwaukee in 2018.

Now, Brennan is brewing beer and putting it in barrels and plans to release his first bottles in November. Ultimately, once the pandemic has passed, he will also open a small taproom at Supermoon.

In the meantime, we caught up with him to ask about his background, Supermoon and its beers, the building he occupies and more. 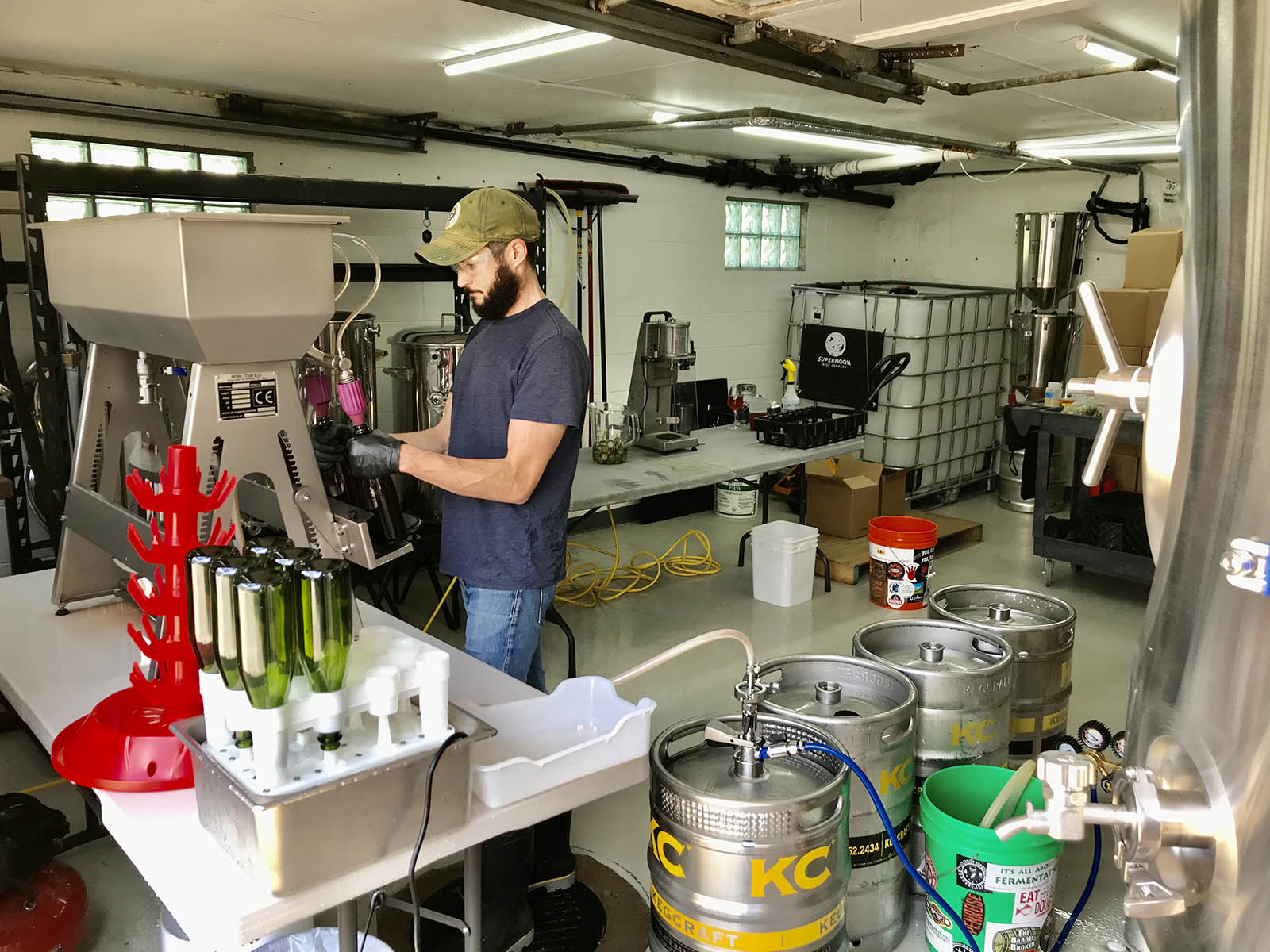 OnMilwaukee: Give us the history of the brewery, if you will.

Rob Brennan: I brewed my first beer in 2008 after essentially living at Lakefront and repeatedly taking their $5 tours as a student at Marquette. My wife and I met while students there and both moved to Chicago where we lived for 10 years. During that time, was part of an initial team that launched Penrose Brewing Company in Geneva, Illinois.

"I spent four years at the brewery, most recently as sales manager. I had been seriously brewing beer at home long before I ever sold a drop of it, but I joined Penrose during the buildout phase and they had a far greater need to get their taproom running and build a sales program than add more staff the production side, so I lived on the sales and distribution side of the business while also gaining up-close experience at nearly every level of brewery operations along the way.

And how did you end up in back in Milwaukee?

We fell in love with Bay View after visiting my in-laws who had planted their roots in the neighborhood, and we knew we wanted to replant ours there, too. While searching for a home, we found this 1902 general store-style building near Humboldt Park and decided to take on the major "fixer upper" opportunity and pursue starting our own small brewery. We’ve spent the last two years simultaneously rehabbing the building while building out the production space.

After receiving our federal and state brewing permits, began building out our mixed fermentation barrel cellar to get a start on long lead blending inventory as we continued working on the building around it. Many of those blending components are starting to become ready.

Tell us a bit about the production process.

I’m taking a hybrid approach to production. I am producing my own wort onsite, turning small two-barrel batches at a time on our three-vessel direct fire system. It’s great for clean beer and recipe testing, but for our mixed fermentation beers, it’s a lot of work to fill one wine barrel at a time, so I’m pursuing contract partnerships to help volume along the way. I basically write a recipe for another brewer – recently at Enlightened – to execute, wort production to knockout, and I take the rest of the process from there.

What kind of beer can we expect from Supermoon?

"Supermoon" is a metaphor for the philosophy behind our priority focus which is mixed fermentation, farmhouse-style beer. While there are upwards of 1213 full moons per year, only a handful are classified as Supermoons. They don’t occur often, but when they do, they’re brighter, more vibrant and more complex than a standard full moon. Similarly, our mixed fermentation beers are fermented almost entirely in French oak wine barrels and can require exponentially long timelines, with fermentation taking all sorts of phased twists and turns, sometimes over months or years, depending what we’re aiming for.

I think it’s important that our beers not only have a point of view, but a sense of place, so we’ll be sourcing fruit almost exclusively from local Wisconsin farms to make our fruited beers.

A fun detail is that our logo is based on a "pellicle" which is a type of biofilm that occurs when fermenting with wild or lactic acid producing organisms. Every one is unique and many remarkably resemble lunar surfaces.

Whereas hops or big barrel character define some other styles, ours will be driven by most heavily by flavors and aromas produced by yeast and fermentation. The majority will undergo a final, intentional and calculated fermentation in the bottle to naturally carbonate and condition them before release.

Where will the beer be available?

For now, our beers are only available in bottles, which will be sold through our storefront on release days in the form of contactless online ordering and curbside/walkup pickup. Before COVID, our intention was to build out our storefront as a small 18-seat tasting room with draft and outdoor cafe-style seats for 10 to be open on the weekends.

The charm of our small space is also its Achilles heel during a global pandemic. But the microorganisms fermenting in our barrels don’t care that there’s a pandemic, so as they become ready, we’ll stick to the bottle release model until we can safely house folks on site for draft and patio service.

With a few releases planned into the spring, we’ll reassess our tasting room plans, and are exploring working with the City to pursue a parklet to expand our current outdoor footprint.

As far as beer in market, I’ve been fortunate to meet some wonderful folks from on- and off-premise accounts I would be honored to see our beer sold in, but again, probably more a focus when we move toward draft when the world – hopefully – normalizes.

What’s the story on the first beer to be released?

Nothing’s been released just yet. Our soft launch, or first day of bottle pickups is tentatively planned for Nov. 21, with folks being able to order and purchase ahead of time through our website. We’re launching with three beers that represent a really nice range of our focus and philosophy. The first three are:

Deus Ex Forager: Mixed Fermentation Cherry Beer. This is a blend of nine- and 11-month mixed fermentation farmhouse beers fermented and aged in French Oak barrels. Whole Door County Tart Montmorency cherries were added directly to the barrels one day after being harvested to referment the beer for six weeks.

Many Phases: Blended Farmhouse Beer. (Blend 001). Many Phases is a planned exploration of blended barrel fermented beers that will have a common thread but vary slightly blend-to-blend, highlighting interesting variations of rustic malt and wort structures, acid profile, barrel character, body and potentially dryhop finishing. This release is a blend of 12- and 14-month mixed fermentation farmhouse beers fermented in French oak barrels.

Oaxen: a Wild Pale Lager brewed with spelt and aged hops. Refermented with B. Bruxellensis. This is a sort of love letter to my favorite beer, Orval.

What's on the horizon after that?

For now, it’s looking like we’ll pace to have a quarterly bottle release, ideally with two-four beers available at each release. Following the Nov. 21 release, we’re looking at our second one in March 2021. Behind the scenes, we’ll be working on clean beer recipe testing and continuing to expand our barrel cellar and blending inventory.

I’d be remiss if I didn’t ask you about the building, which I know you’re excited about.

Our building was built in 1902. It started as a general store, and has since been all sorts of things from a cobbler, to a candy shop, to a law firm and recently a seamstress. But honestly, the most interesting stuff in the building is it’s bones.

During the demo phase I was able to see the results of some pretty impressive manual labor and building materials. All of the beams, posts and studs are old growth lumber. The wood that builders used at this point in time was milled from trees in untouched, non-commercialized forests that had much longer, slower growth than today’s which results in much tighter rings and thus strength.

The front of our building is literally supported by two old growth tree trunks. Compared to today’s stud lumber, its basically an entirely different building material and it appears to have all been tacked by hand with the largest nails I’ve ever seen. I saved a bunch of the framing timber to use as the foundation and support for our barrel stacks.

There were two non-chimneys constructed with cream city brick, so we dismantled one and will be repurposing the brick, and I removed several layers of horsehair plaster to expose a gorgeous cream city brick chimney in what will be the tasting room.

Recently, someone reached out to me via Instagram explaining his family owned the original store in the early 1900s, so I’m hoping to learn a bit more about its origins once we’re able to meet in person. I'm sure there’s way more I don't know about the buildings history, but cannot wait to find out.

Something worth noting is that our building is undergoing an entire exterior facelift this fall. It’s a major capstone after doing all the behind the scenes work to the inside of the building over the last two years. Just in time for our first release.