Diner Survey Results: Your feedback for restaurants as they reopen

Last week, we surveyed our OnMilwaukee readers, looking for their feedback about restaurants reopening. Today, weï¿½TMre releasing the results of the survey, which garnered responses from 3,347 readers and was distributed widely to restaurants across the city this week.

Today, Mayor Barrett announced that restaurants and bars across the City of Milwaukee will be allowed to open their doors to the public beginning Friday, June 5 at 2 p.m.

The news comes as a relief to some, who've been eager to reopen after experiencing three months of lost revenue. For a good percentage, the news changes virtually nothing; opening at 25% of capacity is no more attractive than remaining closed and continuing to offer carry-out. And for yet others, the notion of reopening is attractive, but presents a series of new challenges. Among them is an entirely new set of responsibilities: namely, keeping customers safe.

With your help, we generated important data

For weeks, both bars and restaurants have grappled with many tough questions regarding reopening. There’s a great deal at stake, from the financial feasibility of reopening at a reduced capacity to their ability to both pay their staff and offer guests an experience that’s both worthwhile and safe. And for many, there simply wasn't enough data to make the decisions necessary to reopen smartly.

In an effort to help, I gathered numerous chefs and restaurant owners together for a virtual brainstorming session. They shared a variety of questions they'd love to ask the dining public. And last week, OnMilwaukee released those questions in survey form to our readers.

Today, we’re releasing the results of the survey, which garnered responses from 3,347 readers and was distributed widely to restaurants across the city this week. For those who are interested in the raw data, it can be accessed here.  A general summary of the data is also available for download. 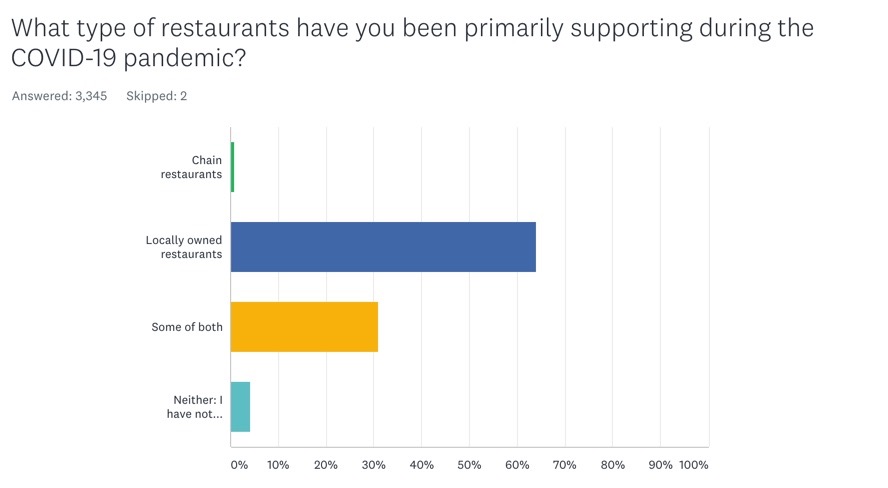 Do people feel safe about dining out right now?

A very big question in the survey was: would diners feel comfortable going out for lunch or dinner if restaurants reopened? The resounding answer was "no." Nearly 74% of survey respondents indicated that they would not feel safe dining in a restaurant, even if/when the City allows them to reopen.

Almost half of these respondents noted that they are not sure when they will feel safe dining out again. Among those who decided to take a stab at anticipating when they might feel safe, answers were divided relatively equally between the options (one month, two months, three months or six months from now), with slightly larger numbers indicating comfort at one or two months from now. 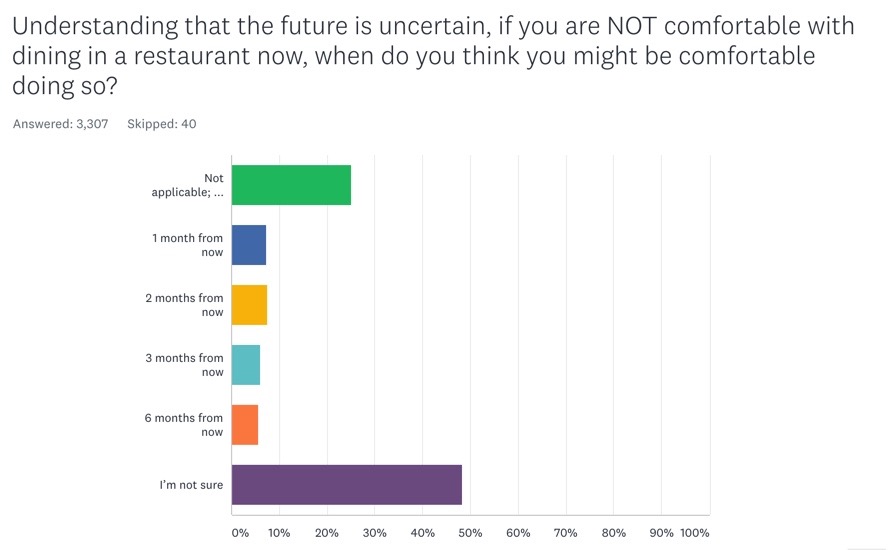 Over 94% of respondents also indicated that they would be willing to continue to support restaurants offering carry-out if those restaurants did not choose to reopen their dining rooms.

What would make you feel more safe?

Diners expressed divided feelings about the sort of menus they’d like to see when restaurants reopen. Online menus were the most popular choice at nearly 35%. About 21% said they’d prefer disposable paper menus. And 17% said they would prefer menus that could be sanitized after use. Nearly 28% reported that they had no opinion on the matter. 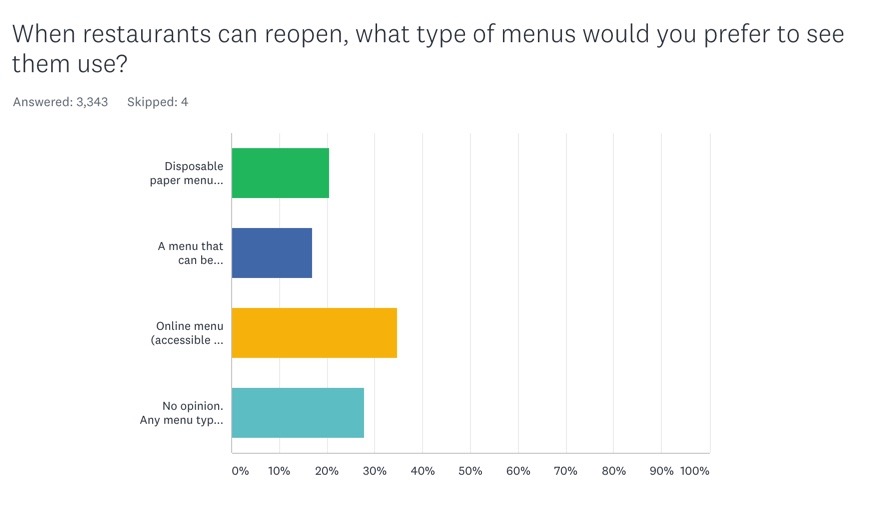 However, feelings were far stronger when it came to other safety measures. While 4% of respondents said they wouldn’t like to see any safety measures put into place, the majority weighed in with clear preferences.

At the top of diners’ lists were: hand sanitizer available to guests (86%); all staff are required to wear masks (74%); temperature and health checks for employees (69%). 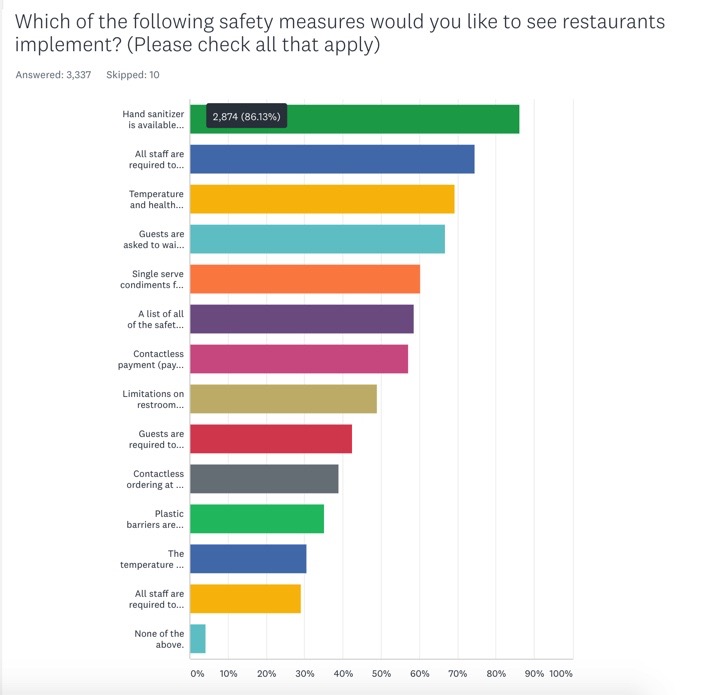 Respondents also prioritized social distancing with 67% saying they would like to see guests asked to wait for their tables outside the restaurant or in their cars. And they spoke out for single serve condiments for guests’ use (60%)

Contactless payment scored quite high at just over 57%; but contactless ordering only garnered support from 39%.

At the bottom of respondents priority list for safety: plastic barriers between tables (35%) and staff required to wear gloves (29%).

While diners didn’t put guest mask-wearing at the top of their safety measures list, 76% said that they would be comfortable if a restaurant required them to wear one.

Meanwhile 52% indicated that if they walked into a restaurant where other guests were not wearing masks, they would not feel comfortable eating there.

Patios seem to feel like a safe choice for many, with 83% of respondents indicating that they would be more comfortable dining on an outdoor patio which has been arranged to accommodate social distancing.

Now, patio dining is a great idea (at least for the next few months). But what if the weather turns sour?

The majority of guests (70%) would also be willing to show their support for a restaurant by ordering carry-out if a restaurant had to cancel their reservation due to inclement weather. Meanwhile, 23% would expect to be reseated inside. Only 7% would choose to forego their dining experience altogether. 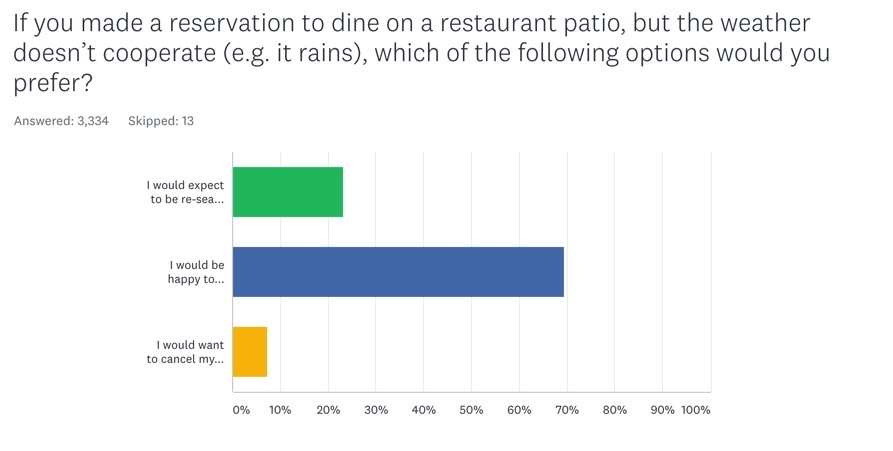 Are guests open to dining rules?

For the most part. Over 71% of survey respondents said they would be willing to support a time limit imposed on their outdoor dining experience. Nearly 58% said they would support the need to pre-order and pre-pay for the food they would eat.
Less popular, but still supported were a temporary "no children" policy (48% said this would be acceptable) and a deposit to hold a reservation (41%). 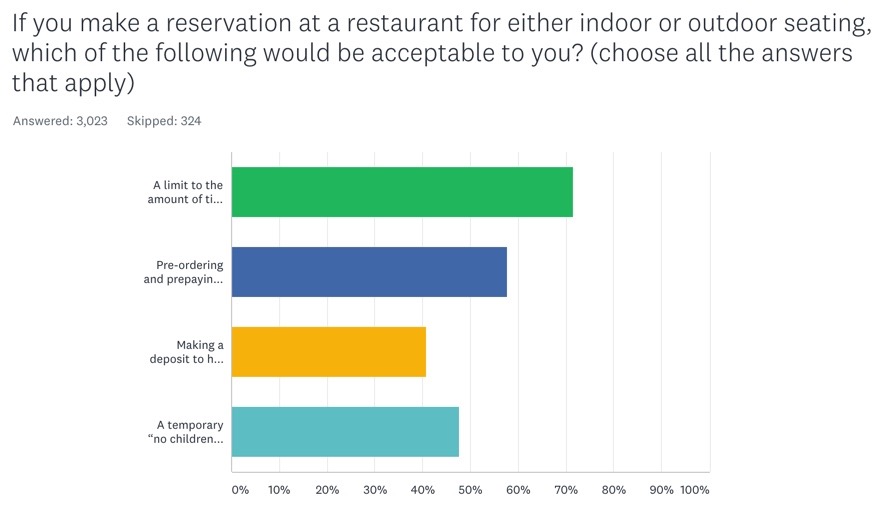 When we created the survey, restaurants were interested in finding out how much people typically spend when dining out (in part, this helps them to drill down more closely to their own individual customer bases). 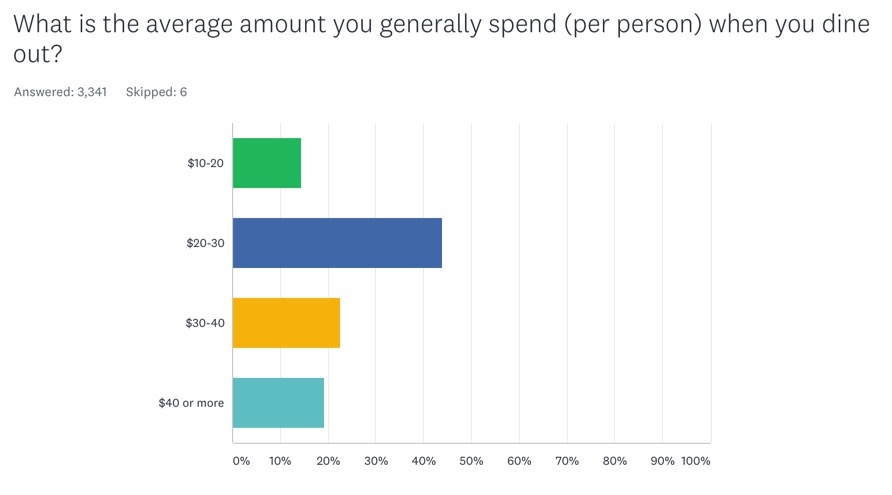 But do diners expect those amounts to stay the same? Most do.

Nearly 62% expect their restaurant spending to remain the same. Around 26% expect to spend more and just over 12% say they are likely to spend less than they did before.

What about service charges to ensure fair wages?

By and large, survey respondents were supportive of the idea of paying a bit more to ensure that restaurant staff could be paid a fair wage if restaurants need to open their dining rooms at a limited capacity. Nearly 72% said they would support such a charge.

But how much are folks willing to pay? Just over 40% of respondents said that a 10% was acceptable and 23% reported that they would be willing to pay 20%. 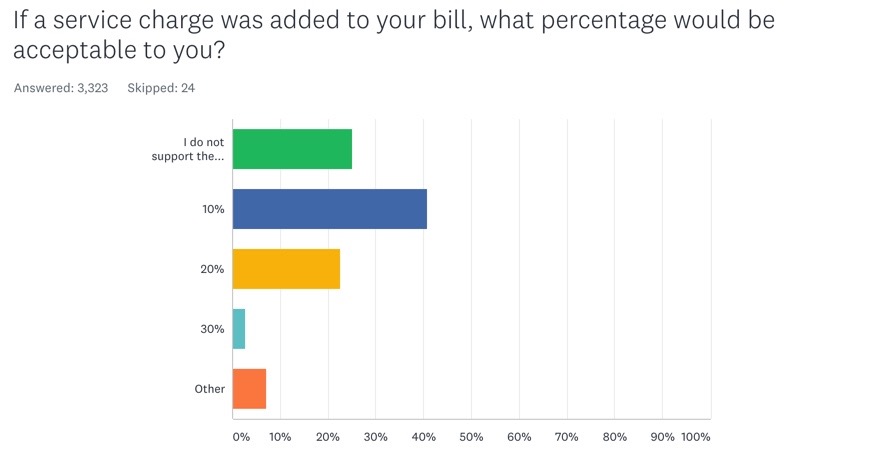 We also included an "other" category to capture opinions from those who would support a charge in some other form. Among the 7% who made alternative suggestions, the following suggestions showed up multiple times in their answers