The Dandy Warhols know you're bored right now. They are, too, having been forced to cancel a tour and self-quarantine like the rest of us. But in their stash of unreleased material, the band found a four-hour treasure trove of instrumental jams, and put it out online.

The Portland-based Dandy Warhols know you’re bored right now. They are, too, having been forced to cancel a tour and self-quarantine like the rest of us. But in their stash of unreleased material, the band found a four-hour treasure trove of instrumental jams – though keyboard and bass player Zia McCabe says calling "Tafelmuzik Means More When You’re Alone" a jam album isn’t quite accurate. This is not four musicians soloing endlessly for 214 minutes.

That’s right. This new album, available for $11.11 only online, is more than three and a half hours long. It’s the perfect background music for this unusual time, and the band is donating a portion of proceeds to Sweet Relief, a charity that helps musicians in their time of need.

We caught up with McCabe to get some insight on how and why the Dandys released this most unusual project – and to check in with her on how she’s holding up while holed up at home.

OnMilwaukee: I looked up what "tafelmusik" means, and I see it’s "table music," but I can't say I totally understand what that means.

Zia McCabe: It's a German term, and it's a style of music that (lead singer) Courtney Taylor-Taylor has been fascinated by for years. I think in the 1600s was when it was most popular. They didn't have DJs. They didn't have playlists. This is the music that was played live, kind of discretely in the corner, as the background music for banquets and gatherings, usually of a lighthearted nature. For us, the concept originally was quite loose. It was, "Let's all play instruments we don't normally play."

These are very unedited live jams, where (guitarist) Pete Holström would get a drum machine sound going and we would play over it in this very sensitive and not overplaying way. I don't think this band has ever been accused of over overplaying.

But you had some structure to the songs, right?

No. He would get a drumbeat going, and we would agree on a key, and we would go. That's why some of the songs are 25 minutes and some are seven minutes. Very little editing happened. I don't remember how much overdubbing even happened.

You recorded this quite awhile ago, right?

Yeah. It was 10 years ago. Courtney realized this is an electronic version of tafelmusik. It's lighthearted, upbeat, background sounds that go really well for socializing at a dinner party.

And so originally that was the intention. We were going to release it as tafelmusik, and we just never did. We only used it for the background of our fancy dinners. Courtney would do the wine pairing and kind of chat about which wine he chose before each course. And then at the end we would do a live improv score to some avant garde films. But throughout the dinner portion of the event would be this tafelmusik on repeat in the background, and that's the only time it's ever been used until the pandemic hit.

We've got an album we're working on, but obviously that's not going to be out for a year or two. I was like, what do we have that we could put out now? I realized, hey, this is the time. It is something I listen to on occasion. I actually really love its meditative quality. And so I was like, you guys, this is it. This is four hours of music that's done. It just needed mastering.

So I figured out some cover art and renamed the songs to kind of still be timeless, but reflect the now of it all. "It's the end of the world as we know it and I feel bored," I think is very telling for what's a surprising feeling for a lot of people. It’s a pandemic, and sure, there were toilet paper fights and some chaos, but mostly what you hear people talking about is they're bored.

Are you feeling bored right now?

I mean, I have a different attitude toward it because I'm a chronic over-booker and so I'm still probably busy by most people's standards. I’m not bored. I’m definitely appreciating that I have time for sewing masks. Boredom to me is a rare treat.

There was this moment where I deleted about two months of activities and yes, a lot of the things I deleted were ultimately income-producing that are not now. People handle their anxiety in different ways.

And I'm realizing the way that I handle mine is structure, planning, lists and having my house in order. And when I say that, do not picture a perfectionist with a perfectly clean house. But everything is in its place. I know where everything is. That drawers aren't a mess. 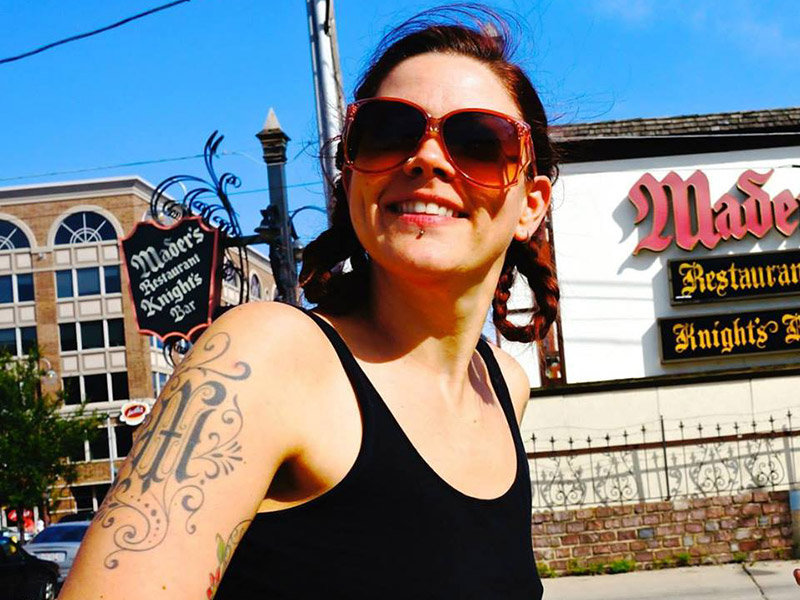 So that's something that I've have sacrificed over the years in order to accommodate all of my interests, including activism and volunteerism. And I think that one of the things I'm going to have to do to maintain a healthy balance is do a volunteering cleanse, which seems weird. Everybody should be doing more to help and more to volunteer in this world. But I think probably the healthiest thing for me would just be to take a year off.

How did you decide to donate a portion of proceeds of the album to Sweet Relief?

I went on my Facebook, and a good percentage of the people in my community are musicians and artists and activists. That's really where my life intersects into the rest of the world. Sweet Release came up multiple times.

This record is 214 minutes long. I've tried to listen to the whole thing, but I haven't made it all the way through yet. Any favorite tracks out of this that you would recommend people listen to first?

Well, what we're calling the single, and it's definitely my favorite track, is called "Zia Rolls Another." It's the only one with vocals. The New York Dolls were in town hanging out at our studio, having a fun dinner. We're showing them the tafelmusik, and that's as much as my memory goes as far as how we got it going. But Sylvain Sylvain speaks French.

I definitely heard some French in there.

I wrote out the story of waiting for a taxi, and I ask him, "Do you have any tobacco? I would like to roll a cigarette." Sylvain Sylvain was teaching me how to say the lines, and I was doing a terrible job. I'm sure any native French speaker who hears this is going to go, "Well, she does not speak French."

What are some of the other ramifications of the pandemic? You guys had to change your tour schedule, right?

Well, yes, there isn't one. We did reschedule the April East Coast gigs for November, which is likely going to be a safe time to be out and doing shows again, depending on how well everyone cooperates. The Dandy Warhols were getting ready to play with the Oregon Symphony. It's something we've been really looking forward to as this completely new way to share our music, and to experience as musicians. I just felt like this wonderful place to have arrived after 25 years of work was to get to this symphony show. The intention was that it would lead to more symphony shows at some point. We very much wanted to kick that off in Oregon, and that's not going to happen.

Are you guys doing any virtual shows?

We've got the perfect place for it with the Odditorium. We could very easily stay socially distanced. And I mean, we're all about six feet apart on stage already. You can zoom with a camera so you don't have to be right up in anyone's face. But our drummer lives in Australia.

Brent (DeBoer) has a family with two kids, and he lives in Melbourne. And so the only way we would do it, which isn't out of the question, is with our original drummer who lives in Portland. We have done shows with him, if something comes up locally that just isn't worth flying Brent out.

I think it would be great if you the band is up for it.

I think it would be great, too. I think right now we're focused on getting these releases out, and we're kicking the idea around. I certainly don't want to over promise, but I wouldn't say it's out of the question.

What's all this doing to your real estate career? Are you hanging in there?

At first it was crazy. I think everybody kind of felt the garage door going down and we all had to roll in underneath before it shut. But I have had some transactions die. People got laid off, and you don't qualify for financing of a home when you're unemployed.

And so as much as I want to make that a sad story about me, I can't help but feel more for the people who had life goals in mind. There are people who had their houses on the market, so they're having to rent while they figure out.

Real estate is like everything: It’s ground to a halt. It's not non-existent the way that my DJing is. That's just zero. I guess I could go online and DJ like some of the DJs are, but I’m just the song selector. I'm a song curator rather than like a mix master.

Where are you in the process of recording a new studio album?

What will the music industry look like after this is all over?

I think that the rebooking is going to be a fiasco because you can't fit four months worth of gigs into one month. So even just rescheduling the shows that were canceled, some people will just have just skip to the next year. That’s going to be hard.

But I don't know, maybe the streaming shows are going to become a platform that people are more familiar with and before maybe got less attention, because why would you watch the streaming when you could go live? And now you realize streaming shows from far away is actually really fun because there's bands that don't come to your town.

Yeah, just like everything that's happening digitally, like going to see the doctor or your vet or your therapist or your music lessons. Personally, I’m still very resistant. My vocal teacher wanted to do lessons over Zoom and I was like, I couldn't get my head around it. I need to be in the room where the sounds resonate.

But everybody is just taking this learning curve that was on a long slow path for everyone to integrate, and is now being forcefully integrated. So everyone's just going to be proficient at the Zoom meetings and not feel so disconnected.