There are fresh new Levantine flavors to enjoy on Milwaukee’s South Side thanks to Taqwa’s Bakery & Restaurant, which opened just about a month ago at 4651 S. 27th St.

Maybe more importantly, you’ll find a business centered on passion, community and the preservation of culture. 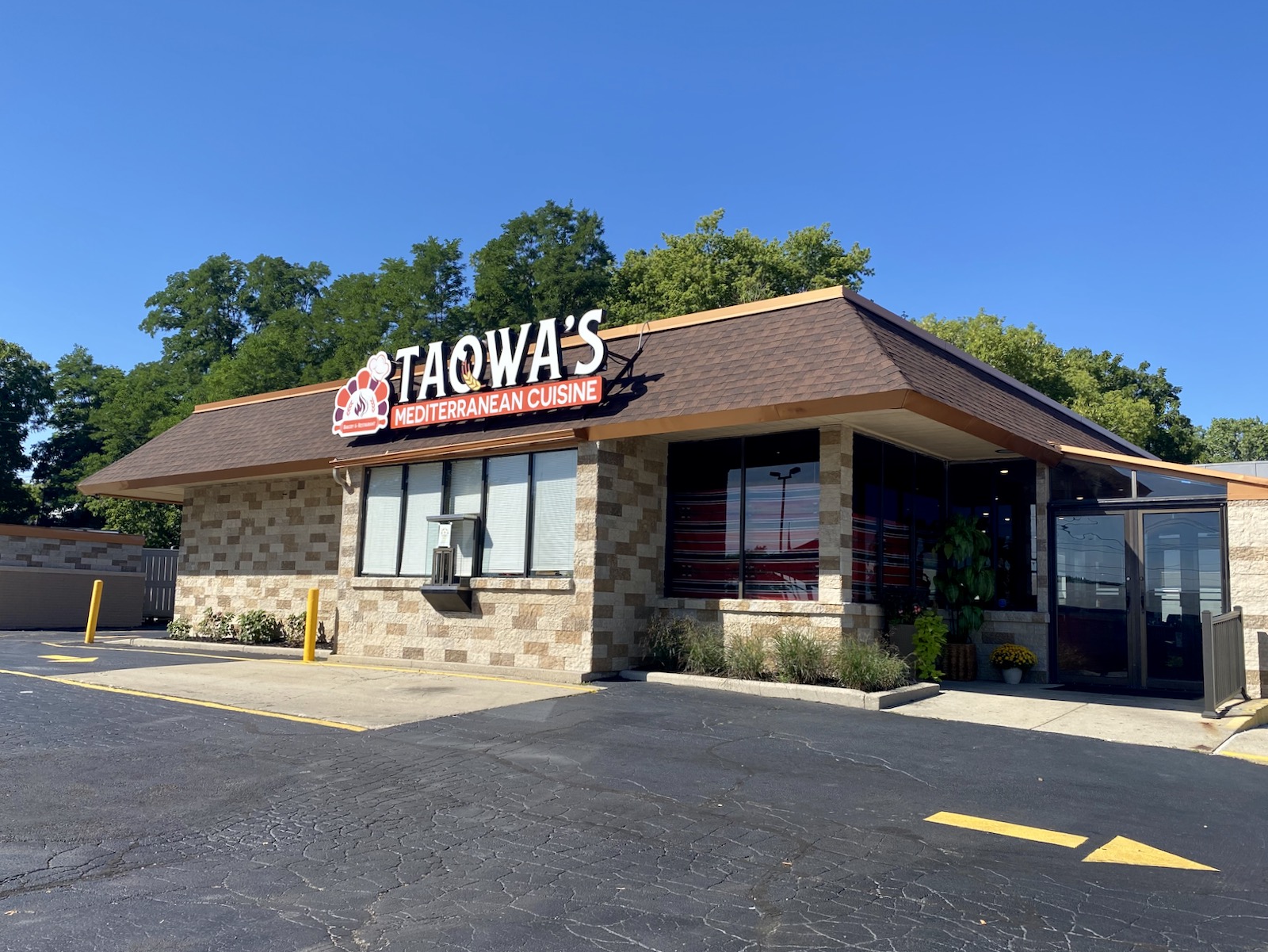 It all started with bread

When Taqwa Obaid began making taboun three years ago, she says she did it to fill a need in the Milwaukee market.

"When my husband [Abdullah Habahbeh] and I moved here five years ago, I noticed that there was no taboun bread here," she says. "Everyone had to drive to Chicago to get it."

The soft, traditional flatbread, named for the clay ovens in which it was baked, is delicious. But it’s also best when eaten freshly baked. And for that reason, Obaid says she called her mother and asked if she would teach her to make it.

"My mother was a wonderful cook," she says, "And she traveled here from Virginia to teach me and my husband how to make it."

When she and Habahbeh mastered the recipe and technique, Obaid says she began sharing the bread with the community; eventually selling it through a local Middle Eastern grocer.

Pictured below: manakish: taboun bread topped with cheese and za'atar. 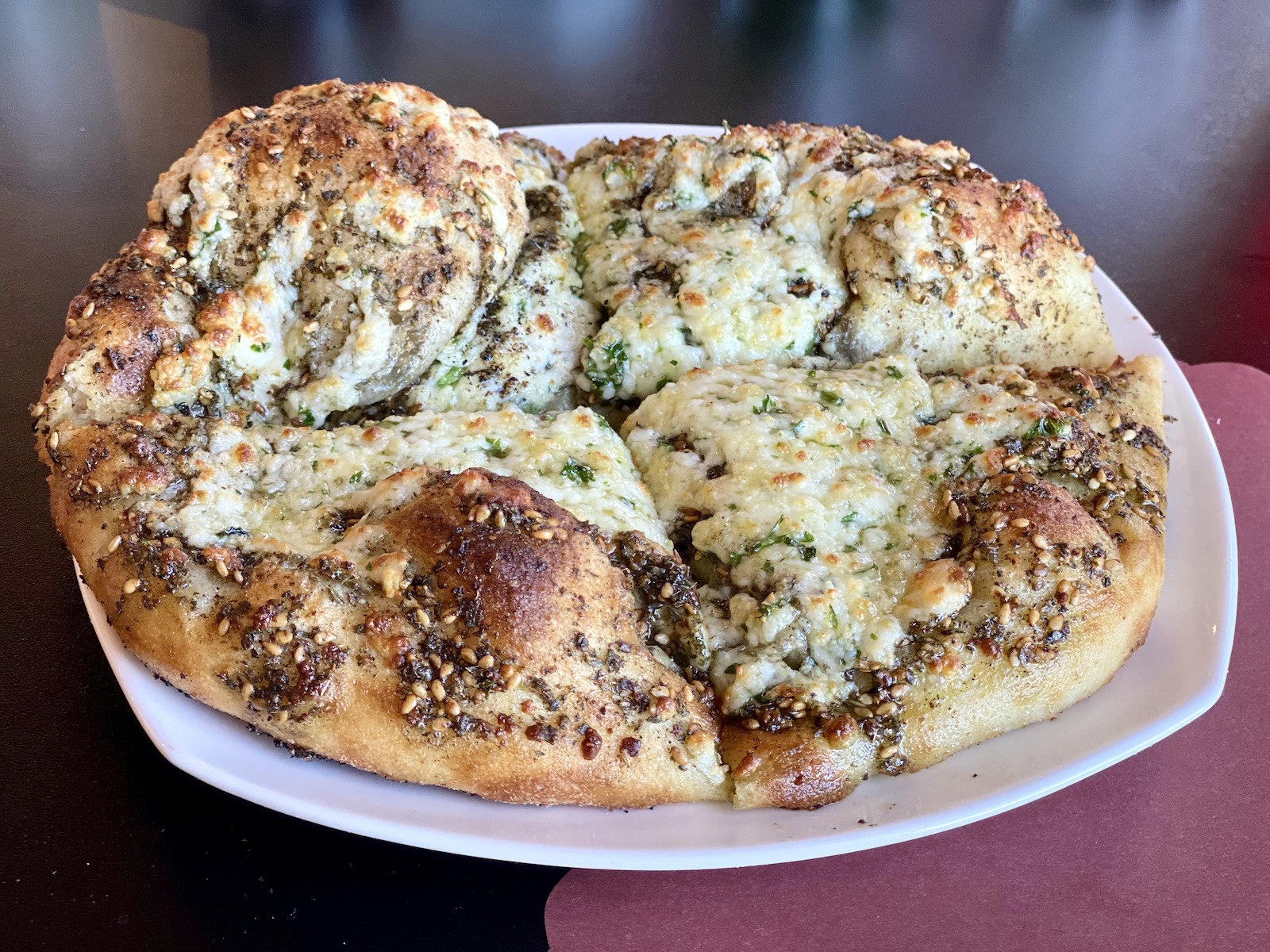 Just a month after she started her business, she says, her mother passed away. "I needed to keep busy," she says, "To keep my mind off of things… so I started cooking more."

Among the dishes she made were Palestinian grape leaves stuffed with seasoned beef and rice and liberally flavored with lemon. 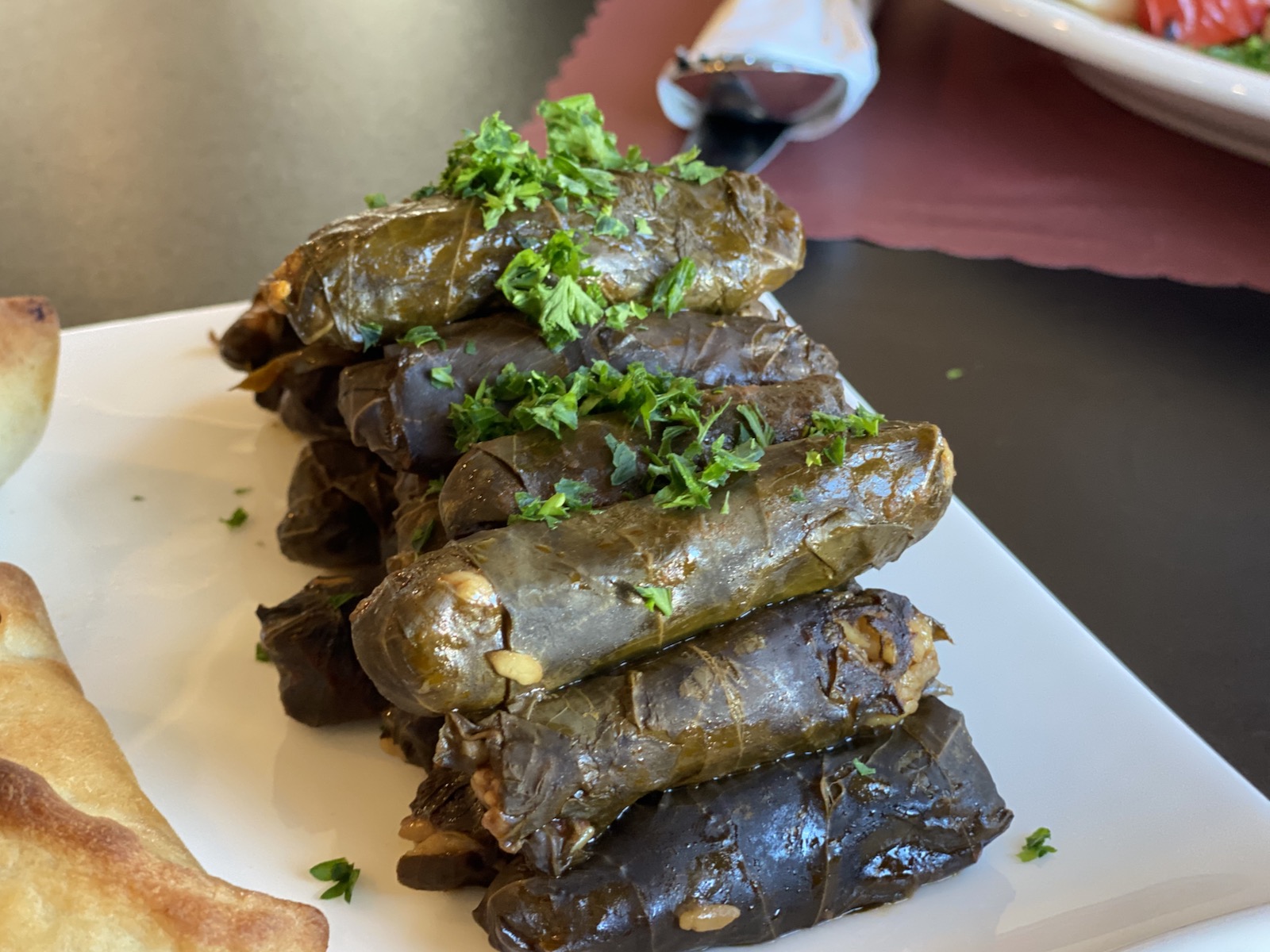 "They take hours to prepare," she says, noting that they are no longer everyday fare for families, who are too busy to take the time to make them themselves.

Friends and neighbors in the community took note of her passion, attention to detail and the quality of her food. And, as word of her delicious cooking spread, Obaid found herself catering birthday parties, engagement parties and weddings. Eventually, she says, she needed a larger kitchen to accommodate her work.

She was fortunate, she says. Her brother-in-law owned a former Burger King in which he planned to open another fast food restaurant. The location was appealing, as it was close to the highway, allowing customers from all over the city easy access.

"The area has so many fast food restaurants," she told him. "But we will do something different."

He agreed. And Taqwa’s Bakery and Restaurant was born. 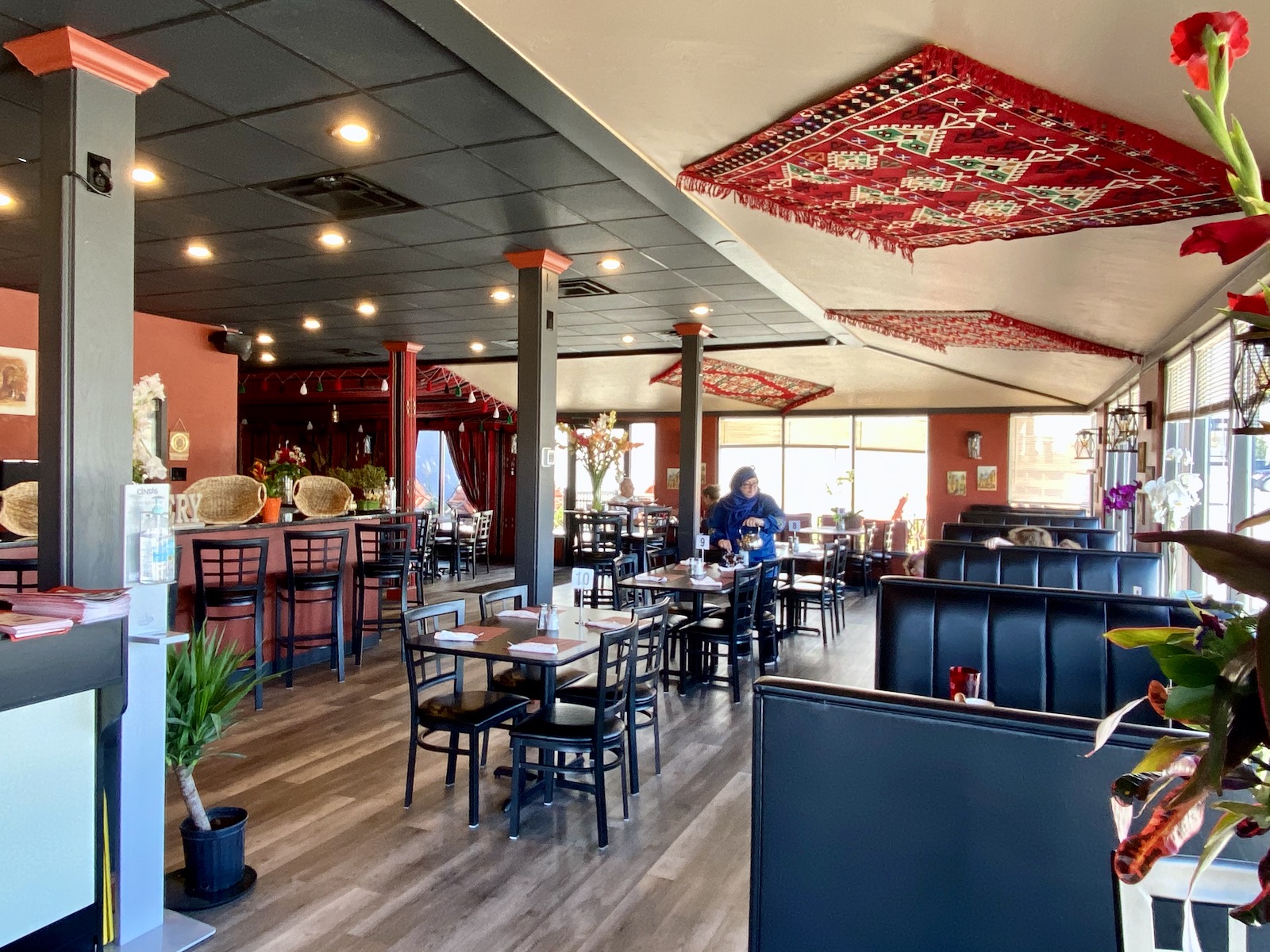 Escape to the Levant

Obaid says she didn’t have the funds to open the business by herself, so she partnered with her friend Luran Allabadi. With the help of a contractor, they remodeled the ailing building, which they decorated with artwork and textiles they brought back from travels to Jordan. 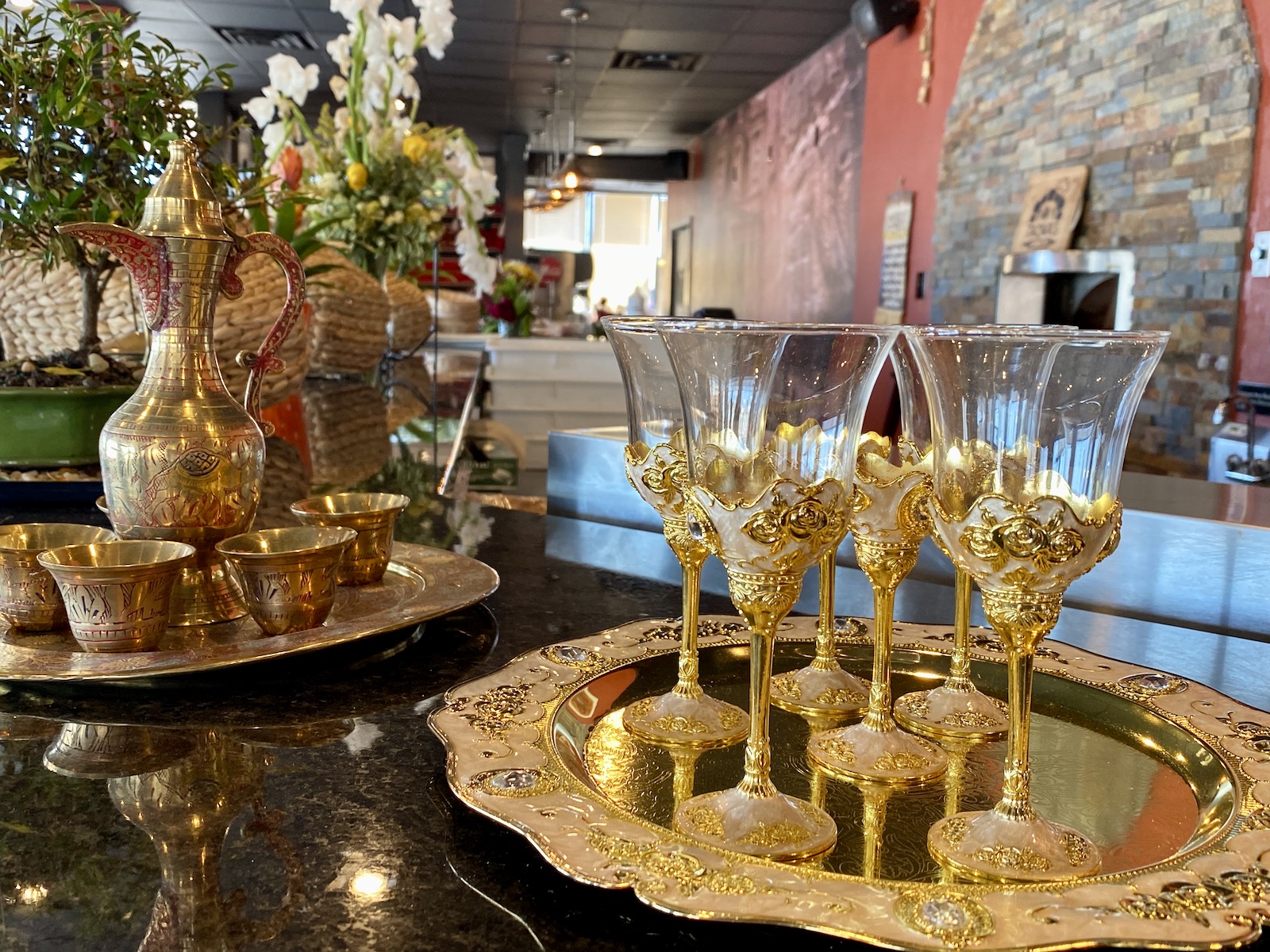 A Woodstone oven, which Abdullah Habahbeh uses to bake bread and fatayer (filled pies) for the restaurant, flanks one wall. 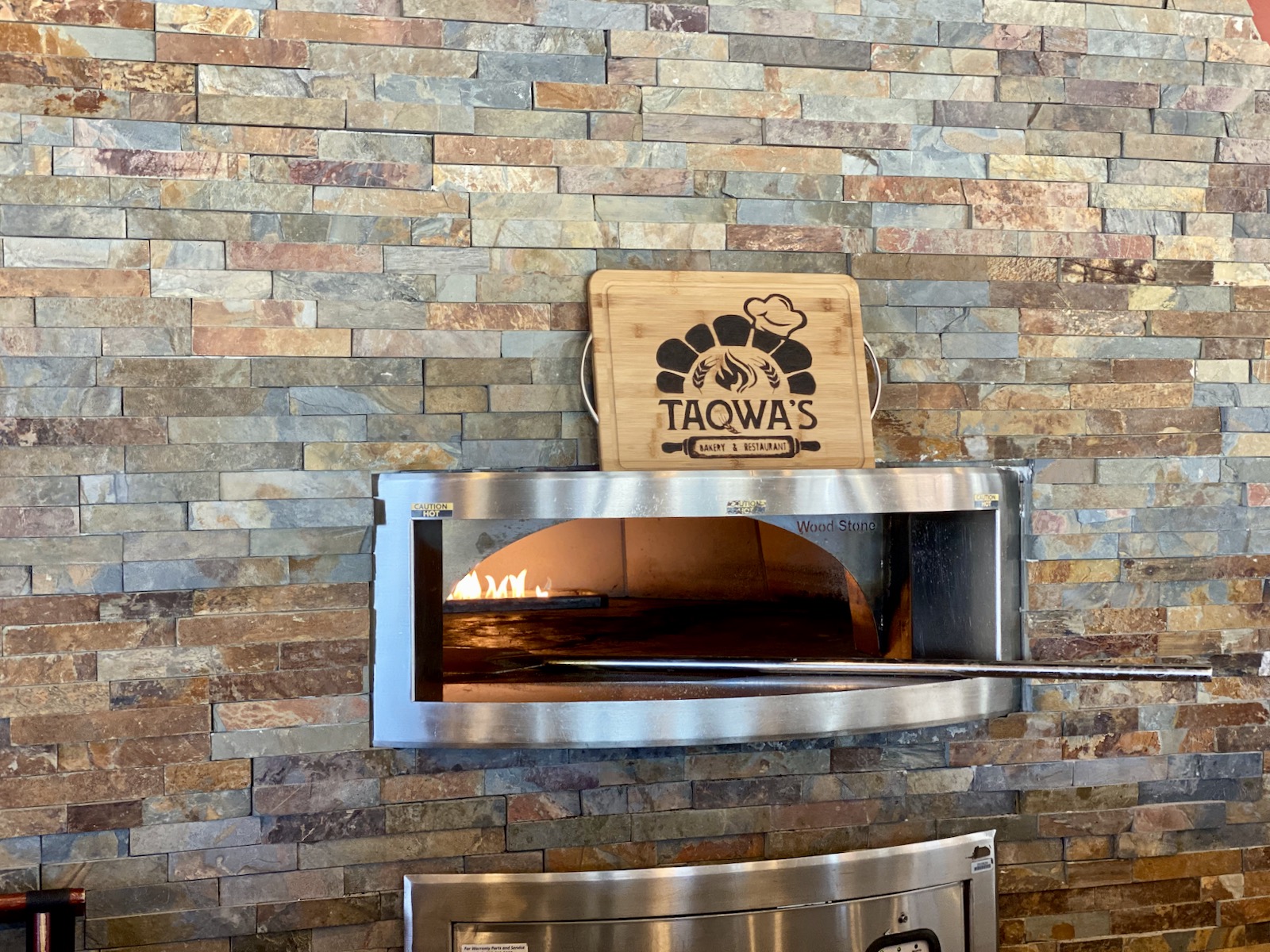 Guests will also find photography depicting the rosy sandstone walls of the ancient city of Petra in Jordan as well as a beautiful cityscape of Jerusalem. The images reflect both her husband’s Jordanian heritage and that of her Palestinian family, who also made Jordan their home. 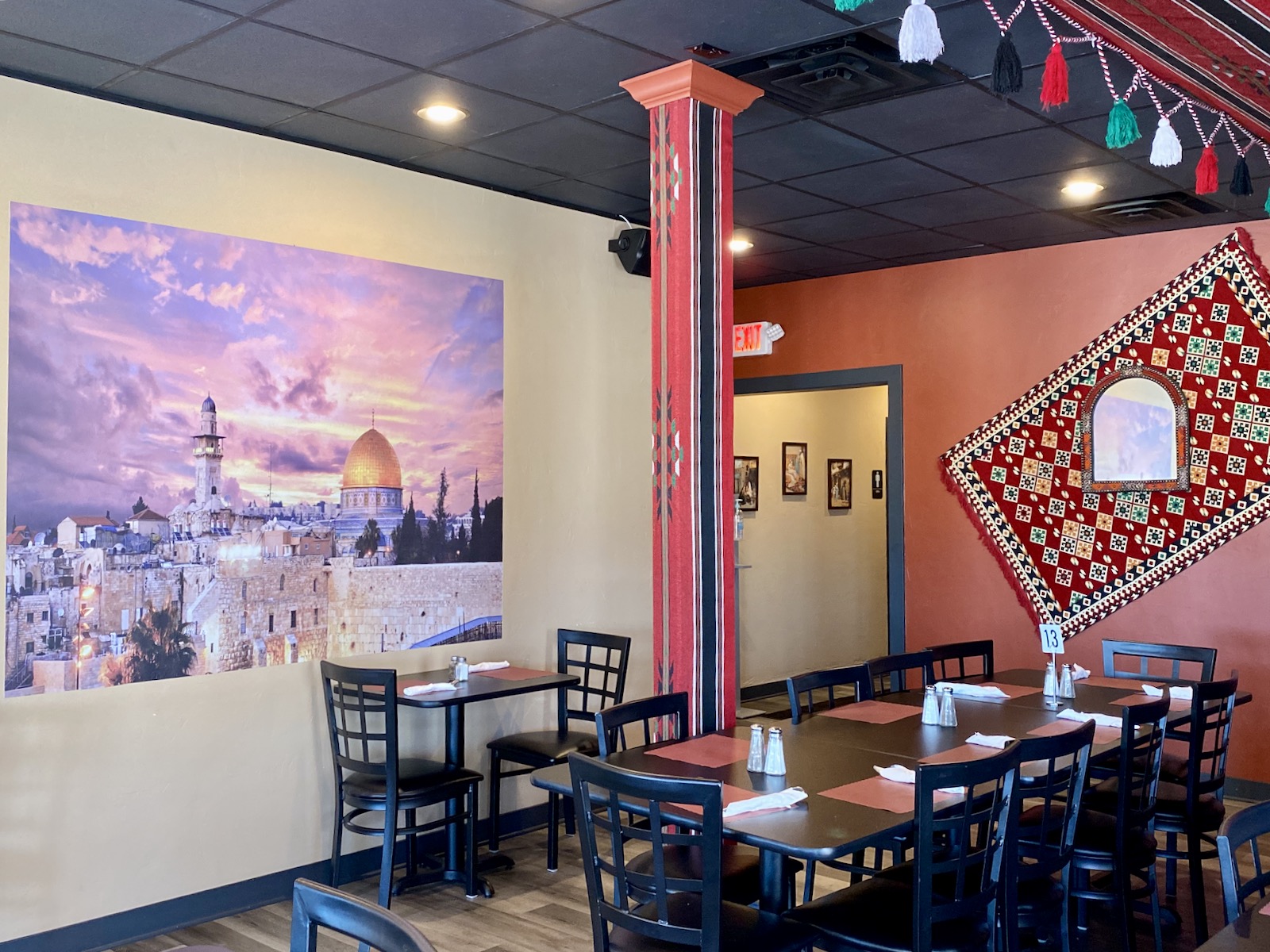 "I wanted to bring our culture to the area," Obaid says. "And I wanted to create a space where people feel as if they are really in the Middle East. I want people who are from there to feel at home, and I want guests to experience the culture as well as the food." 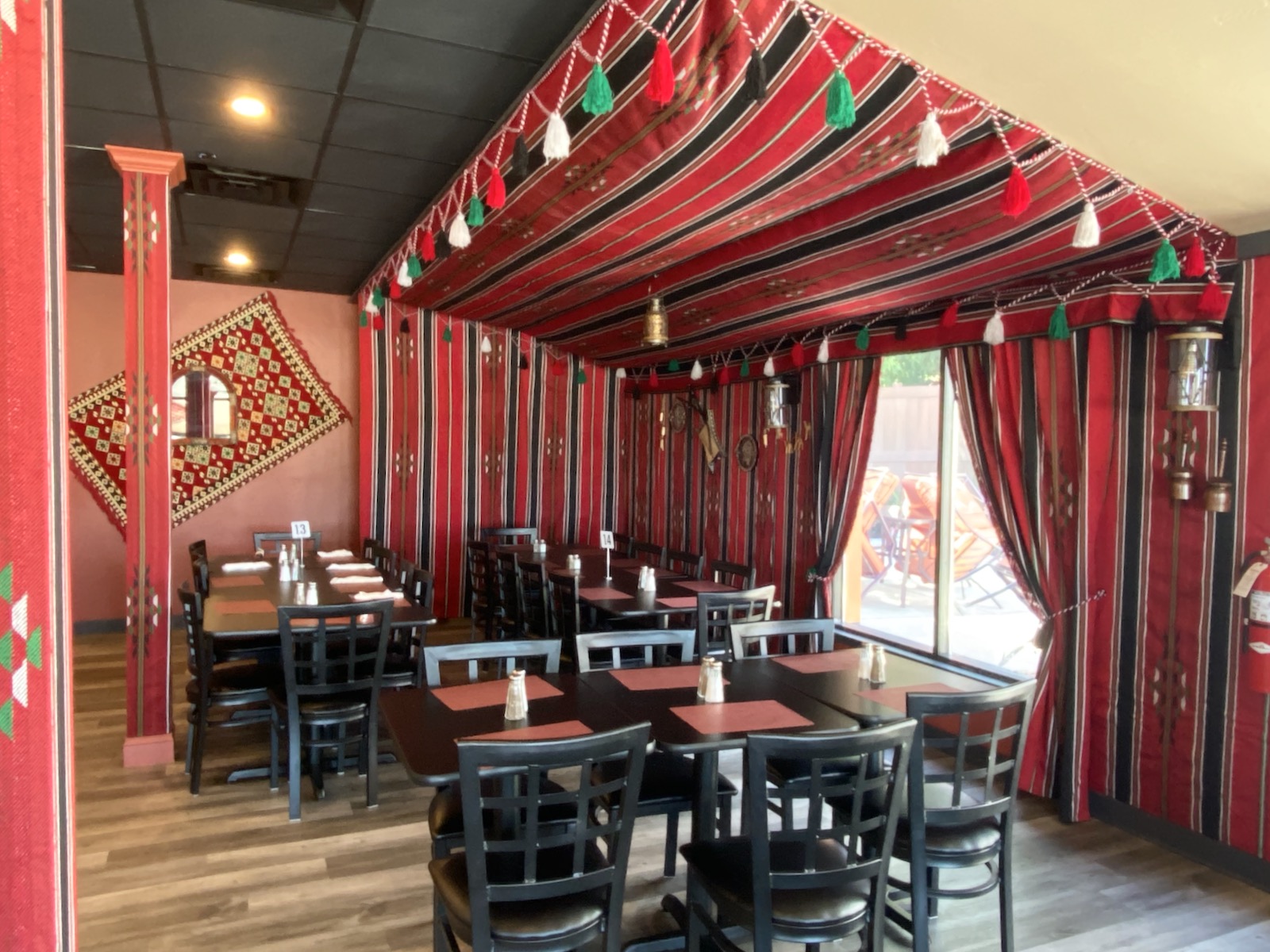 They decorated one area in the restaurant to recreate the look and feel of a Jordanian tent, Obaid says, with the idea that it would be a beautiful place for guests to hold parties or gatherings.

Before or after dining, guests can also pay a visit to an opulently decorated seating area near the door. It’s donned with colorful tapestries and equipped with a collection of traditional headwear, robes, lamps and musical instruments which guests can use to pose for photographs to share on social media. 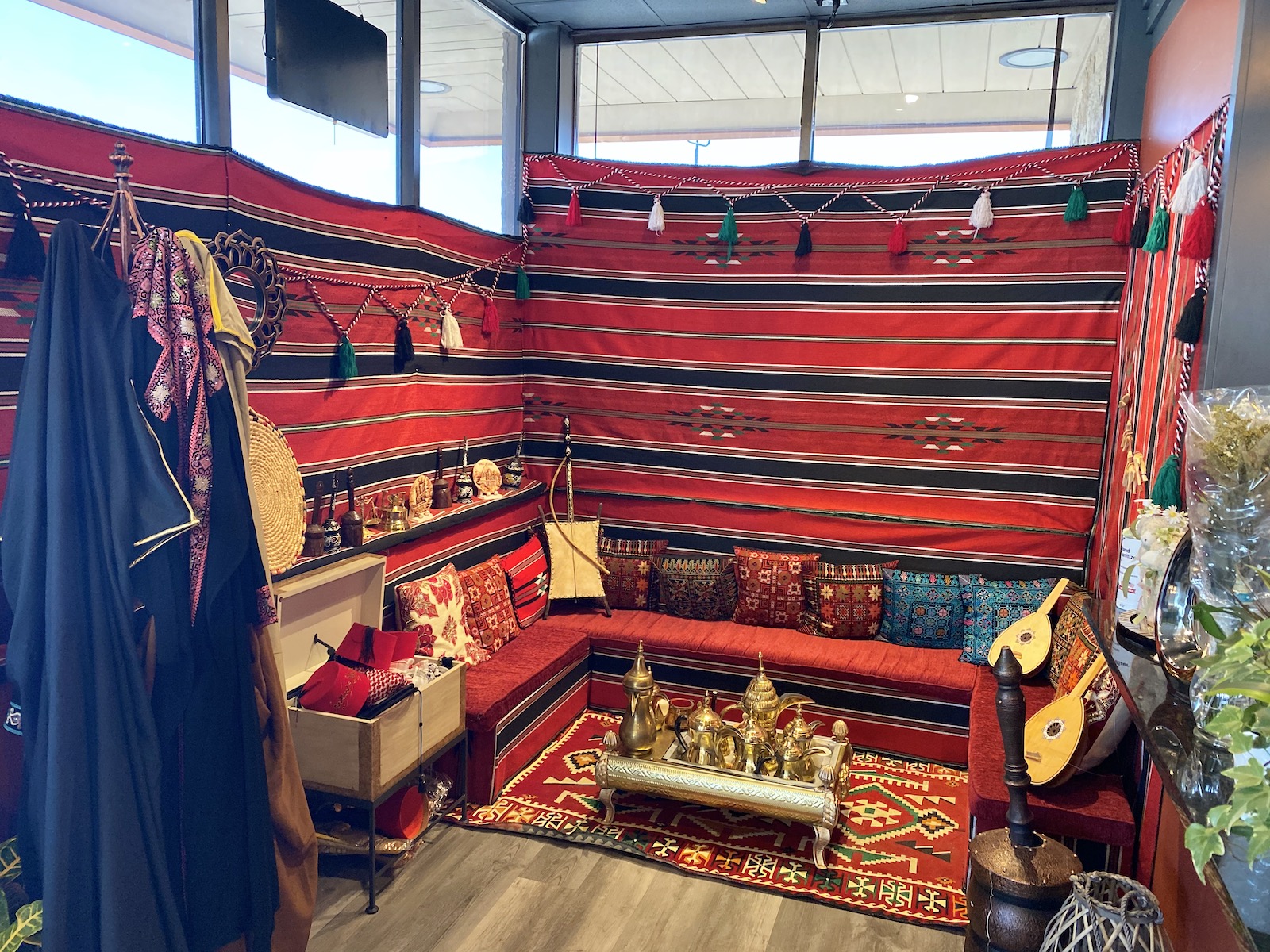 "It’s something I saw in Jordan," she says. "But i’ve never seen it here… and it makes me so happy to see families taking pictures together and having fun with one another."

It was a difficult task, she says, but they completed the restaurant in time to open on July 31 and celebrate Eid al-Adha, the second of two globally celebrated Muslim holidays.

Obaid says the menu is based on her mother’s recipes, which she says she is so grateful to have learned, and which she hopes she can pass down to her daughter.

"My mother was an amazing cook," she says with a smile. "And she sat with me for so many hours, teaching me how to make things… and talking and laughing."

Appetizers include selections like falafel (six for $2.99) and kibbeh (five pieces for $8.99) along with hummus and baba ghannouj ($4.99). There is also lentil soup and traditional salads (fattoush, tabbouleh, Mediterraneann, tahini and tzatziki) for $4.99. 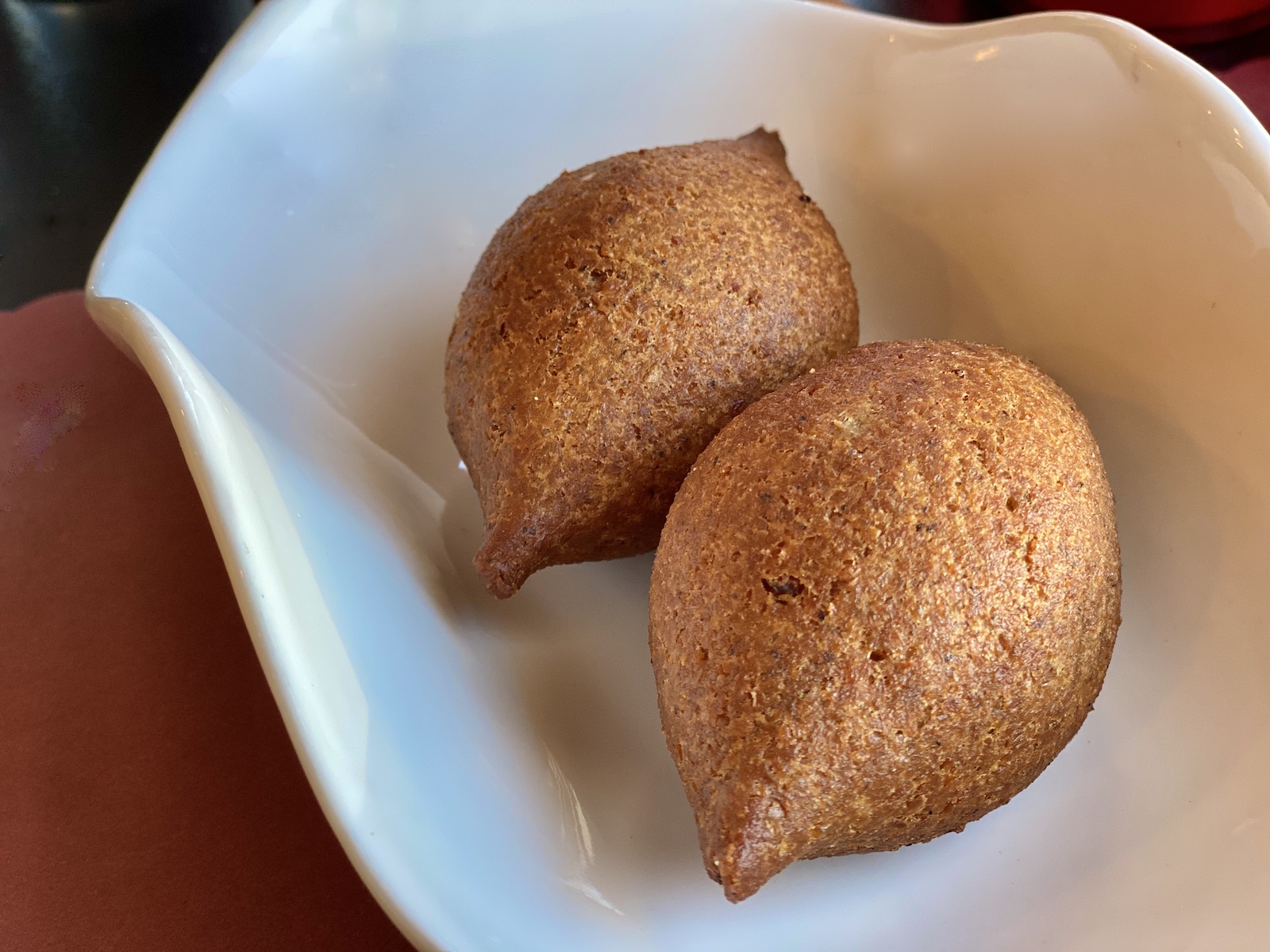 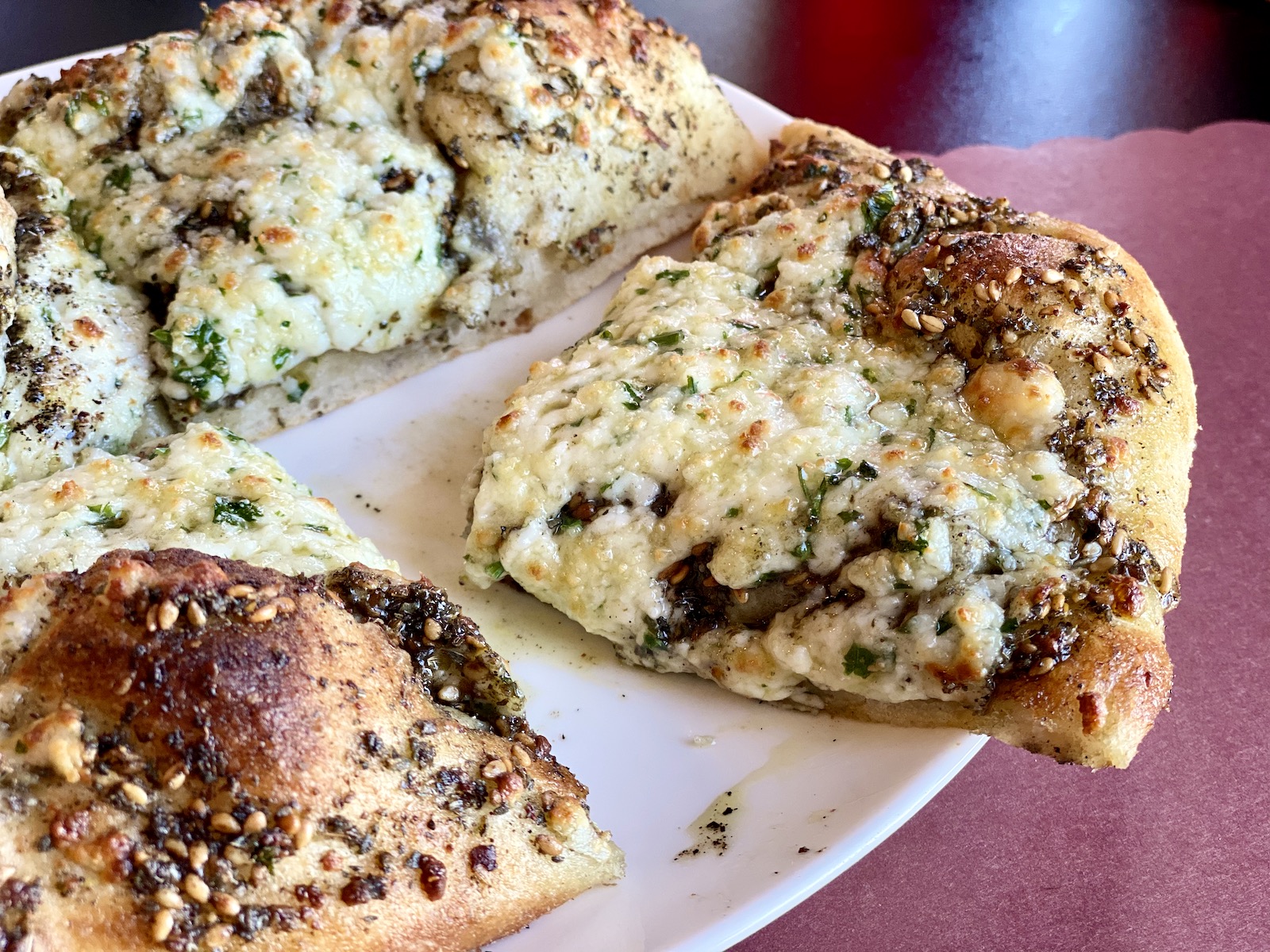 Tender fatayer (pies) are also cooked in the Wood Stone oven and feature soft, supple dough with fillings like spiced beef, tomatoes and onions; cheese and sesame seeds; spinach, onions and sumac, seasoned mashed potatoes; and beef hot dogs (a special treat, Obaid says, for the children). The pies are substantial and just $0.99 each. 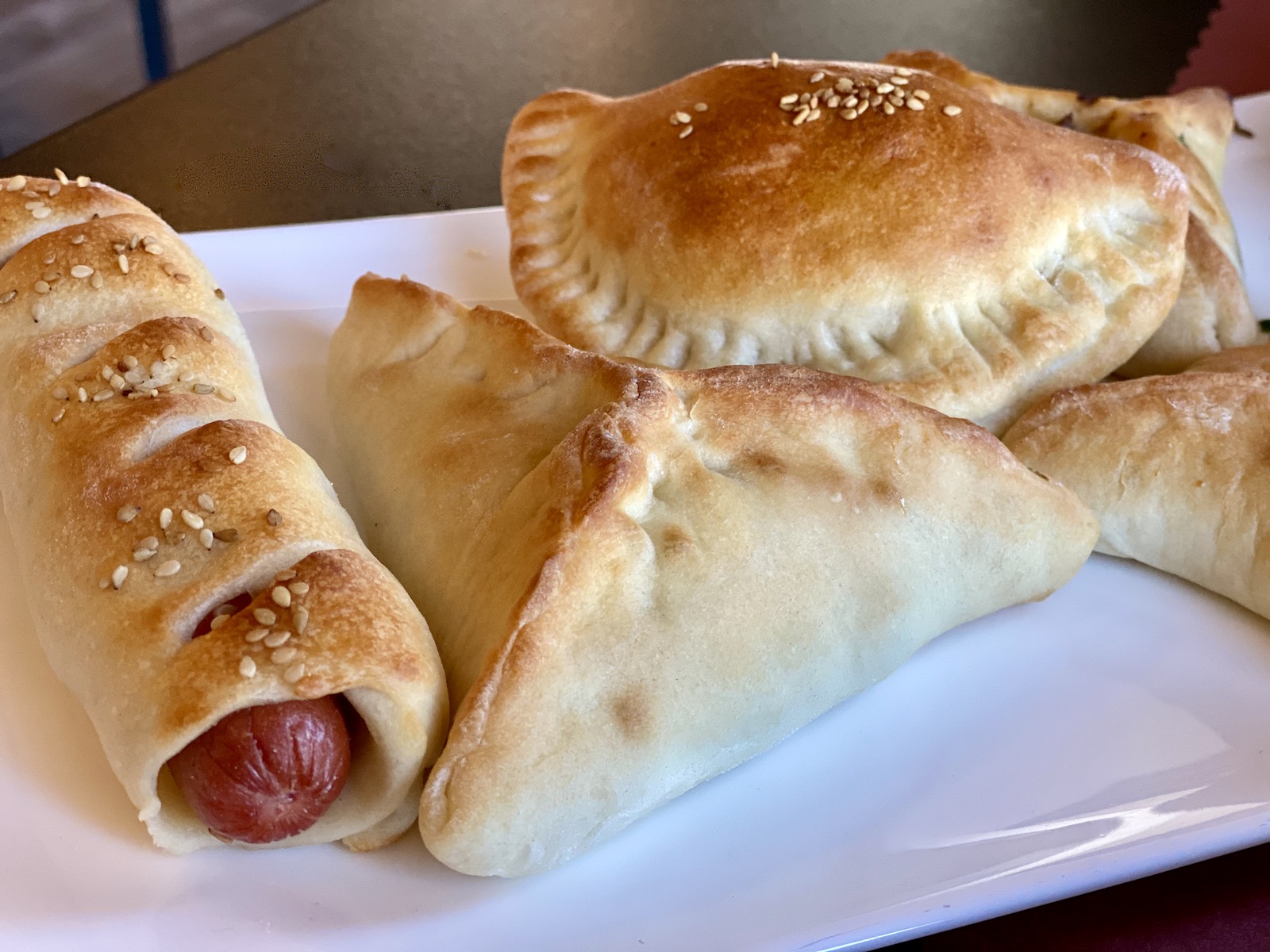 Signature entrees include Taqwa’s famous mosakhan featuring taboun with caramelized onions, lemon, olive oil and sumac topped with a grilled half-chicken and served with tzatziki ($9.99); and dawalee, a dish which combines her signature stuffed grape leaves with a quarter chicken and tzatziki ($9.99).

There are also beef, chicken and kufta kebabs ($14.99 with rice or fries and salad), vegetable kebabs ($9.99), marinated lamb chops ($15.99) and sawani kufta, a unique presentation of charbroiled seasoned ground beef topped with tomatoes of tahini sauce ($9.99). 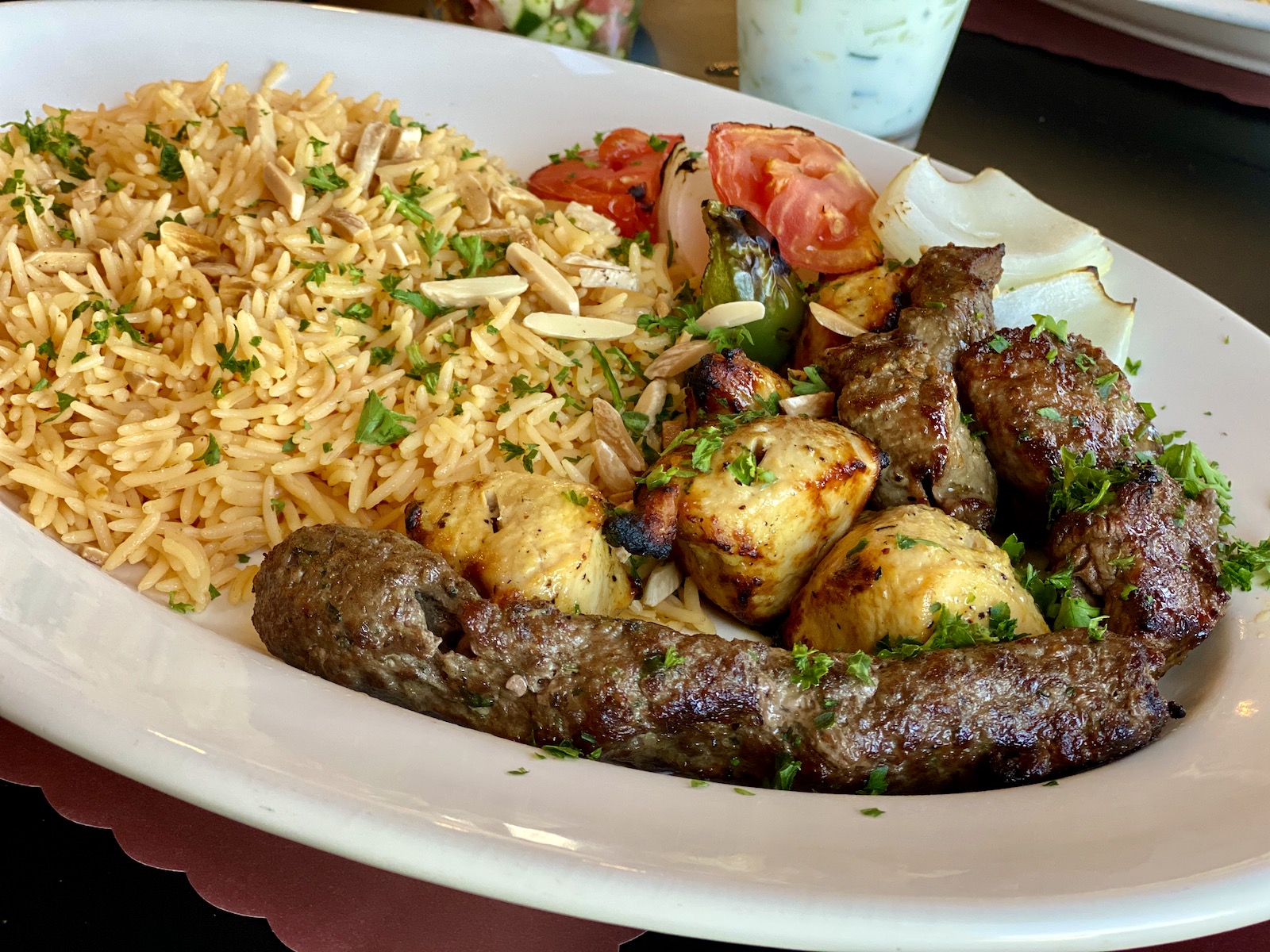 For those looking to feed a crowd, mixed grill platters which feed up to 10 are available for $49.99-$99.99. They include beef, chicken and kufta kabobs, rice, taboun, salad, hummus, baba ghannouj and pickles.

Desserts are also made in house and include selections like baklava, warbat (phyllo filled wiith custard); and maamoul (cookies stuffed with date filling, three to an order) are also available for purchase at $2.49 each. 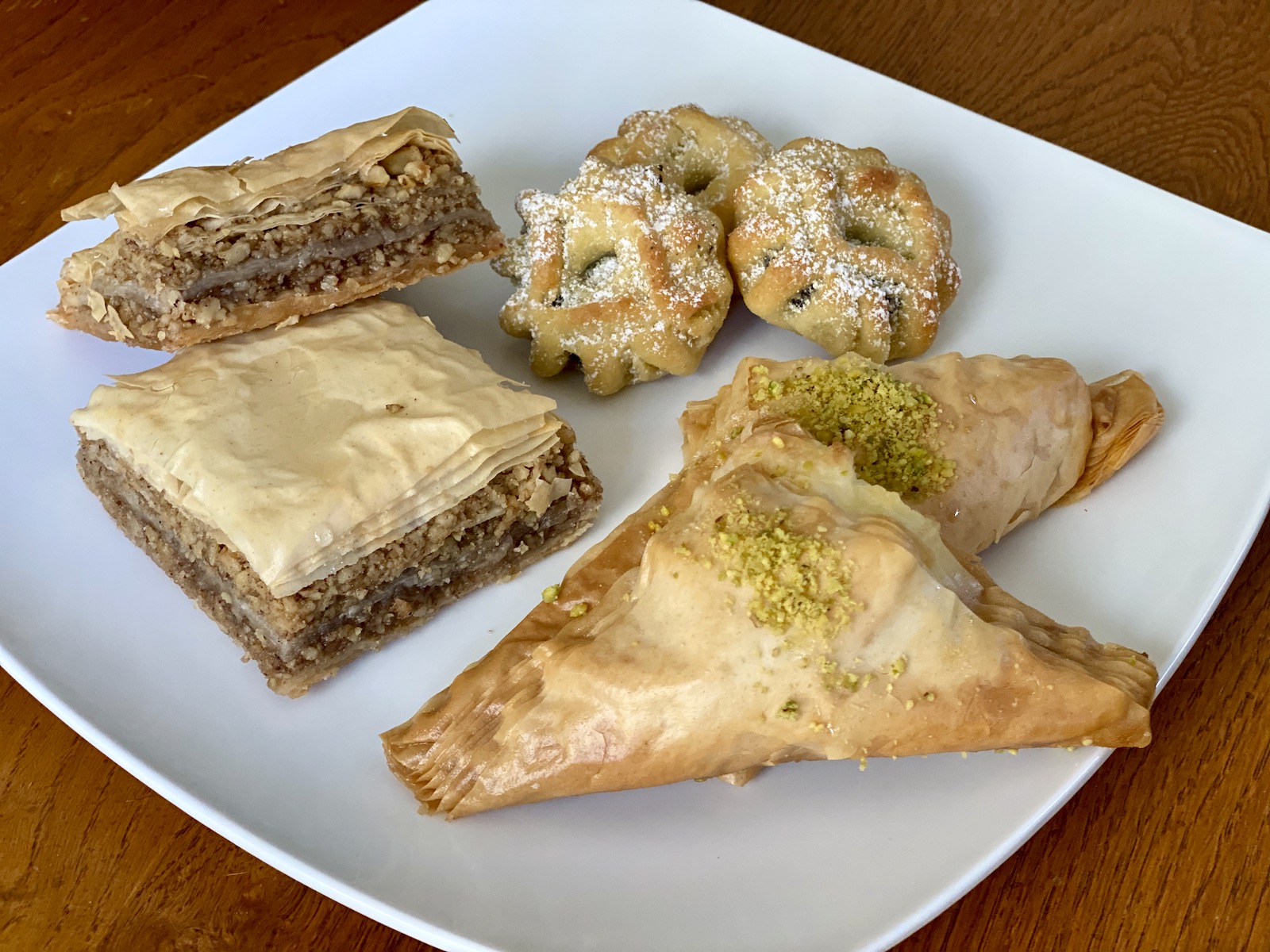 A kids menu features options like chicken tenders, Wood Stone pizza and hotdog fatayer for $5.99 each (comes with French fries and a soft drink or milk). View  the full menu on Facebook.

Taqwa’s is open daily from 7 a.m. to 9 p.m. Carry-out is also available; for now, guests can place their orders by phone at (414) 539-6878 In the weeks ahead, Taqwa’s will also offer drive-thru pick-up. Event catering is also available.

It's time for a glass (or two): 2A Wine Merchants opens today in the Third Ward

A peek at Vendetta (Italian) Coffee Bar, which opens next week in Wauwatosa