Do this: Get a taste of Mimma's Cafe at upcoming dinner and classes

For nearly 30 years, dishes from Mimma's Cafe on Brady Street were a staple for Milwaukeeans looking for classic Italian dishes. If you miss those flavors, you'll be delighted by these upcoming opportunities to taste Mimma's classic dishes once again.

It was 1989 when Girolama "Mimma" Megna opened Mimma’s Cafe on Brady Street. And for nearly 30 years, her dishes were a staple among those looking for Italian fine dining in Milwaukee.

The restaurant was also a game changer for Brady Street. Mimma’s became the place to be for romantic dinners, business meetings and special occasions. Megna’s homestyle cooking attracted the attention of celebrities like Ernest Borgnine and former New York City Mayor Rudy Giuliani. And the restaurant’s rapid growth attracted much needed attention to the East Side strip, resulting in interest that sparked both investment and increased business in the area.

Needless to say, when news broke that Mimma’s would serve its final meal on Dec. 31, 2016, there was a cry of mourning from diners who had grown to love Megna’s homestyle dishes.

Fortunately, Megna has not yet hung up her apron. And diners who’ve missed her cooking will have numerous opportunities over the next few months to experience her talents and learn a thing or two from the woman who gained a reputation as the "Mother of Brady Street." 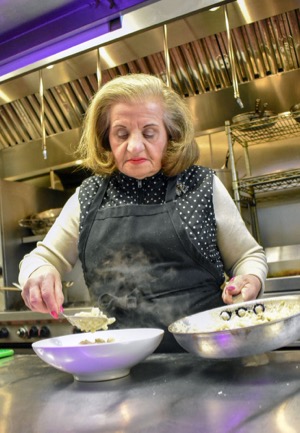 On Feb. 25, Supper, 1962 N. Prospect Ave., will host a very special one-night-only engagement during which diners can enjoy six classic dishes from Mimma’s on Brady. Megna herself will be working the kitchen with the assistance of Supper executive chef Erik Hansen.

If you’d prefer, you could also spend an hour or two learning the secrets behind the dishes that attracted loyal customers to Mimma’s Cafe for nearly 30 years. During the months of March and April, Megna will host a series of cooking classes, each of which will feature classic dishes from regions including Tuscany, Roma, Sicily and Piedmont.

Each class will take place at 5:30 p.m. at the second floor kitchen space at the Milwaukee Public Market, 400 N. Water St.

March 7: A Tour of Italy on a Small Plate

Impress all of your friends by throwing a delectable Italian soiree. You’ll have all the skills to do so after this class during which Megna will teach attendees how to prepare a variety of tasty (and filling) antipastos including gamberi Toscana (Tuscan shrimp), arancini (rice balls stuffed with meat, seafood or vegetables) and bruschetta, made with fresh tomato and basil.
Cost: $89 per person.

This class will showcase the flavors of Sicily through dishes like marinated artichoke bruschetta and Sicilian papardelle con ragu di agnello (lamb ragu). Megna will also make her version of the caprese salad with colorful cherry tomatoes and homemade dressing.
Cost: $89 per person.

During this class, Megna will dispel the myths surrounding the Roman staple, spaghetti alla carbonara, a simple dish made from bacon, eggs and cheese that’s both simple and impressive. Attendees will also indulge in chicken parmigiana and panzanella salad.
Cost: $89 per person.

April 18: A Taste of Piedmont

During this session, Megna will demonstrate how to make a variety of dishes from the Piedmont region. Guests will enjoy an appetizer of funghi ripieni di menta e prezzemolo (stuffed portabella mushrooms) as well as Piedmontese favorites like pork scallopine and risotto al funghi e zafferano (mushroom risotto with saffron).
Cost: $89 per person.

For more information and to register for classes, visit milwaukeepublicmarket.org.

Lori Fredrich Jun 29 #RaiseMKE
Do This

Love wine? Get your tickets for Uncorked: Milwaukee coming to the Deer District

Lori Fredrich Jun 27 Dining
Do This