A series of construction photos reminds us of the short life of the Telenews/Esquire Theater on West Wisconsin Avenue.

When we think of vintage movie theaters, I think we all tend to think of them as having had a long life, but some were built later in the cinema boom and fell victim to urban landscape changes relatively quickly.

One Milwaukee example, was the Telenews Theater, a streamline moderne (late art deco) venue designed by architect Richard Philipp (who designed The American Club in Kohler, among other works), that was built at 310 W. Wisconsin Ave. in 1946-7.

The theater – developed by the Ticonic Investment Co. and part of a chain owned by Hearst news that included theaters in other cities like Detroit, Cleveland, Oakland, San Francisco and Seattle – opened in 1947. The biggest of them all, it seems, was in Chicago.

It wasn't terribly big, with just 470 seats. But it was air conditioned and only cost 33 cents (plus tax) to get in to see the one-hour mix of news stories and sporting events footage.

On the lower level was the WFOX radio Theater Radio Lounge, where patrons could watch broadcasts taking place in person.

"The auditorium ... was not at all noteworthy," Jim Rankin wrote on the Cinema Treasures website, "having no balcony or stagehouse and almost nothing in the way of ornamentation, but there was a memorable feature in the basement below the lobby that served as the lounge for the restrooms: a street scene from Paris, complete with wire tables and chairs, concession stands made up to resemble cafes with awnings, and a mock sky ceiling above with a cobblestone floor below.

"It apparently didn’t work out as intended, since the stands were closed soon, and all refreshments had to be bought at a smaller stand in the lobby above."

The theaters, typically built in the 1940s and focusing on newsreels, were a bit late to the game. As television took over, the theaters soon converted to showing feature films.

According to Larry Widen and Judi Anderson's book, "Silver Screens," the Telenews began showing features just a year after opening.

Milwaukee's Telenews became the Esquire when Marcus Theatres purchased it in 1965 and heavily remodeled it.

The change came a few years after employees bought the Milwaukee Sentinel newspapers from Hearst, which had controlled the morning paper since 1924.

According to Mark Zimmermann, who worked at the Esquire from 1971 to 1973, "The studio where the broadcast was originated was in the back with a glass window and door. By 1971 it was a storage room and it still had soundproofing materials on the walls. The outdoor cafe look was still there, but was looking ragged. There was a working fountain that was used for donations for charities, but by 1973 the fountain was broken and lay empty after that."

Zimmermann also recalled on Cinema Treasures that the Esquire was where cult classics like John Waters' "Pink Flamingos" and "The Rocky Horror Picture Show" made their Milwaukee debuts.

"When Marcus Theatres bought it, the Esquire started showing prestige foreign films like Ingmar Bergman and Bridget Bardot. Then they had the exclusive Milwaukee showing of 'The Graduate' for 68 weeks. Other movies that they had for runs of four months or more were 'M*A*S*H,' 'Romeo & Juliet,' 'Love Story,' 'Harold & Maude' and 'Slaughterhouse 5.'

"By the 1970s things started going down hill. We stopped getting exclusive premieres and started sharing playdates with Southgate and Mayfair Mall theaters. Then we started running double-bills along with second-run neighborhood houses and then started showing Swedish X-rated movies. The one thing we did start at the Esquire that was ahead of its time was Midnight Flicks. We first aired the infamous John Waters film 'Pink Flamingos.' The Milwaukee police shut the theater down after the second Saturday showing. After three weeks of debate in the Common Council they allowed us to show it again. Next we played 'The Rocky Horror Picture Show' for about six Saturdays before it moved to its permanent home the Oriental."

Even though the theater was built without a balcony, Zimmermann remembered a small one with 52 seats that must have been added at a later date, perhaps when it was remodeled by Marcus.

The Milwaukee theater, like most of the entire square block, fell in 1981 when it was replaced by the Henry Reuss Federal Building, which has been rebranded as the 310W.

The block had also been home to the Alhambra, Vaudette (Magnet), Whitehouse, Miller (Towne) and New Star (Saxe/Orpheum/Gayety/Empress) theaters.

These photos showing the construction progress of the Telenews Theater were taken by James B. Murdoch (read more about him here). They are from the archive of the Dahlman Construction Company, founded in Milwaukee in 1908 and still active. 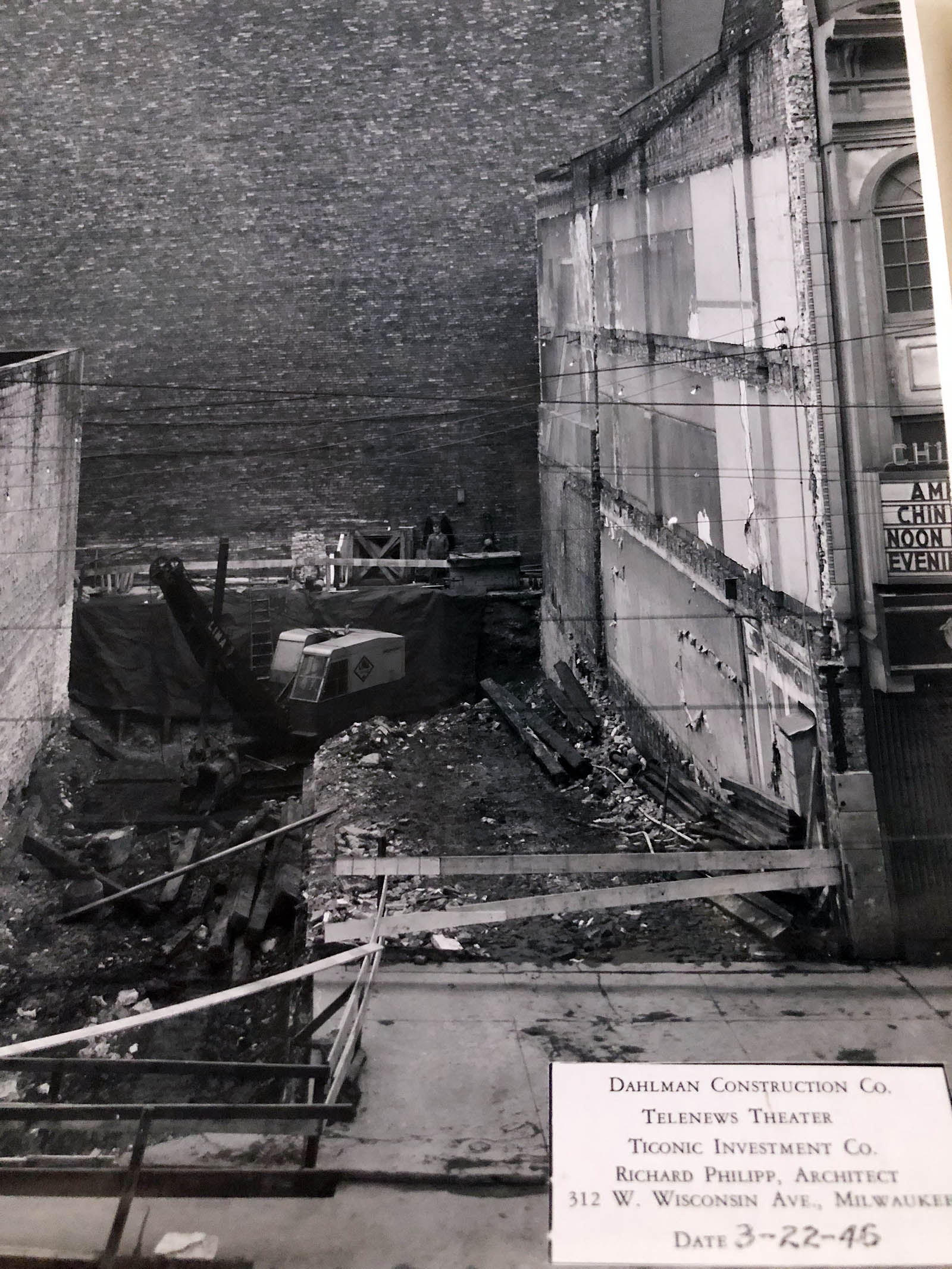 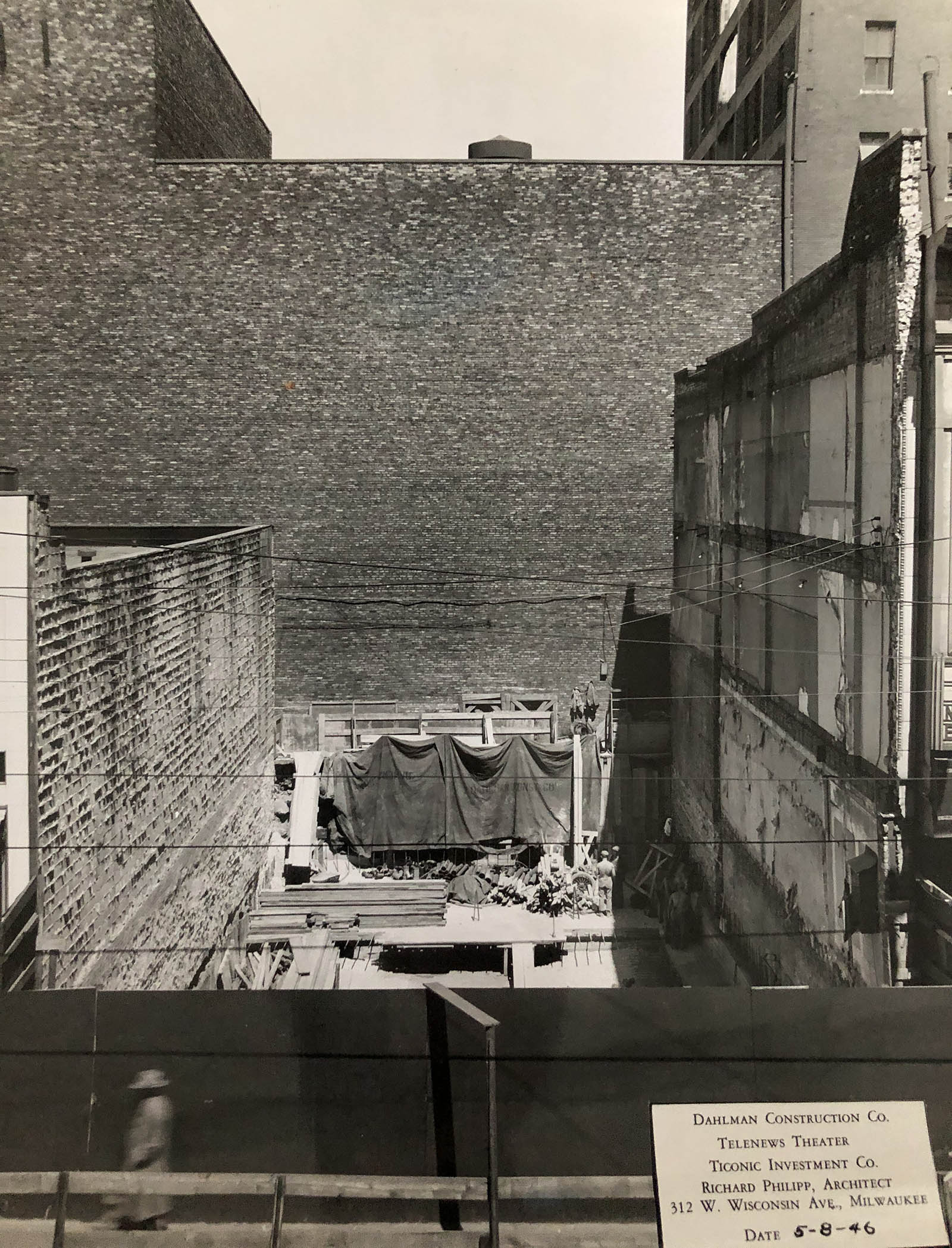 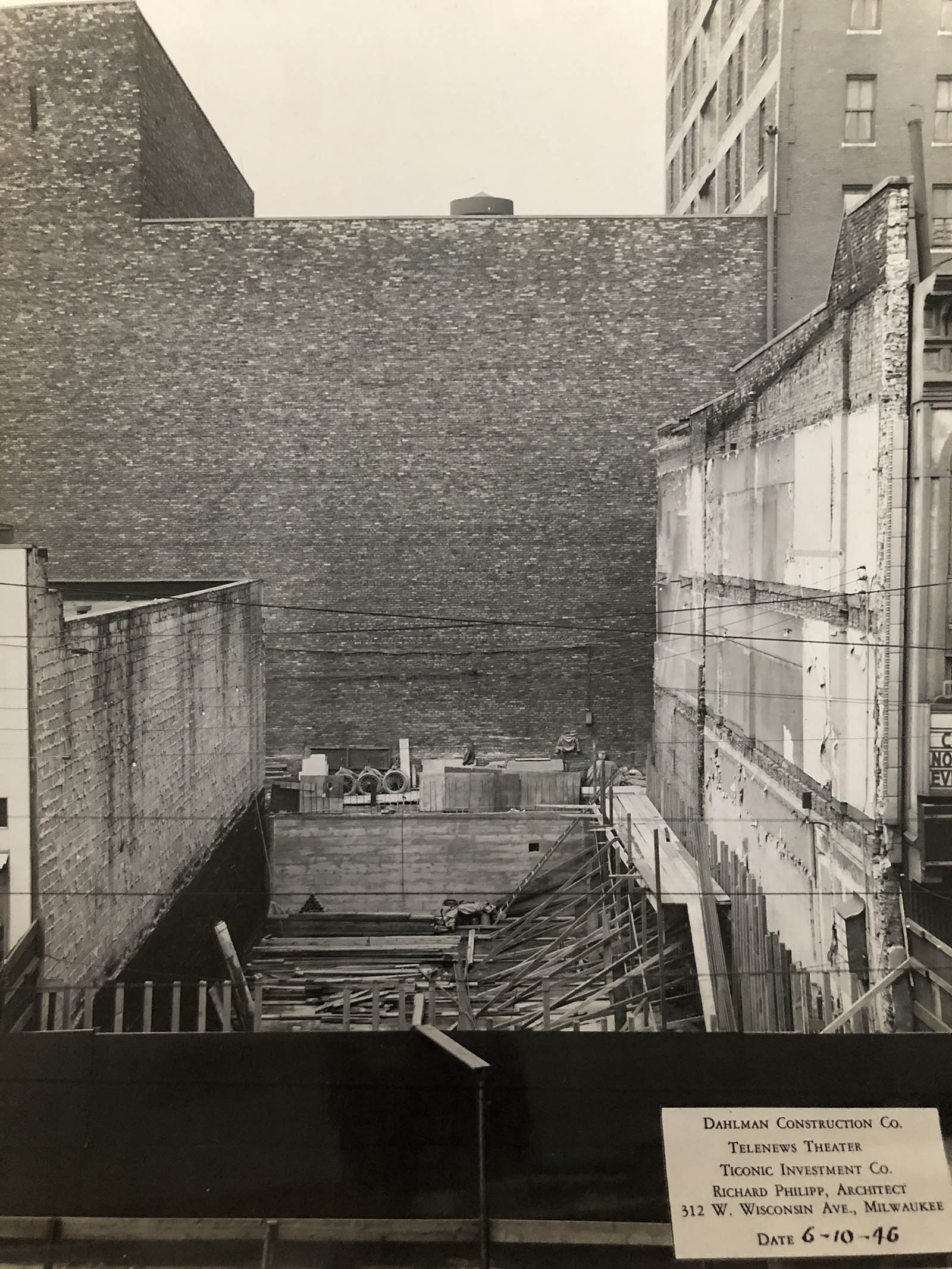 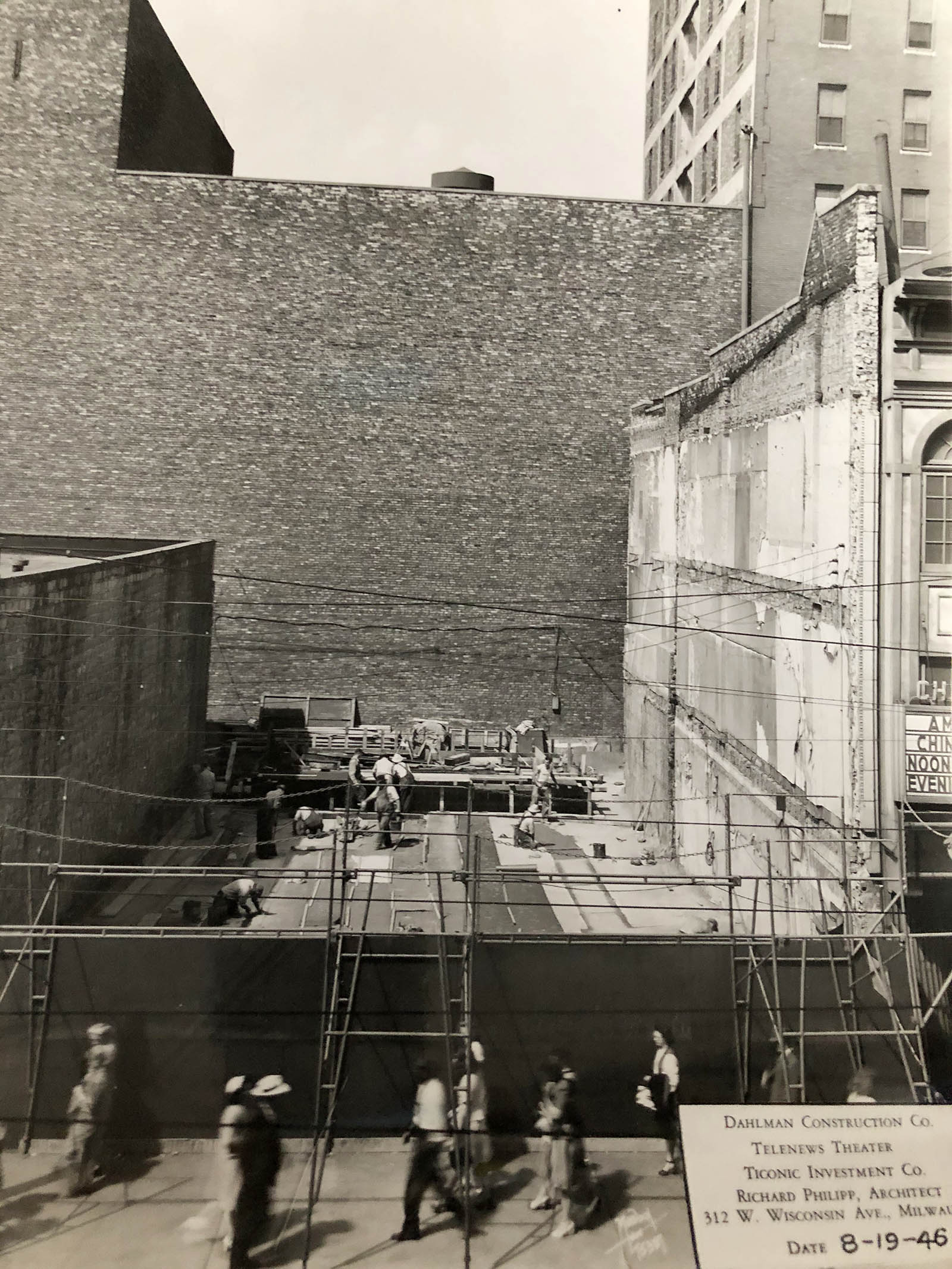 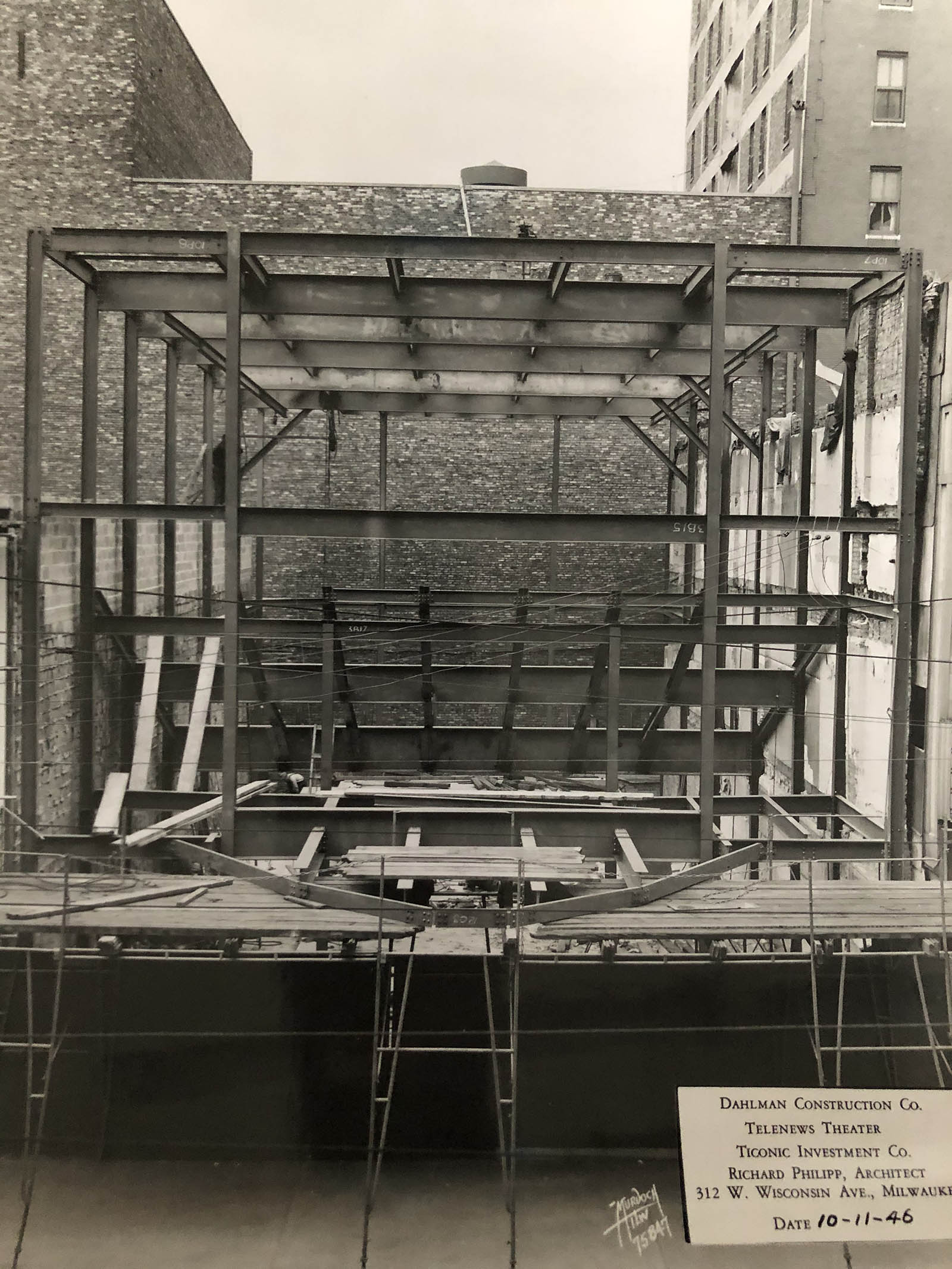 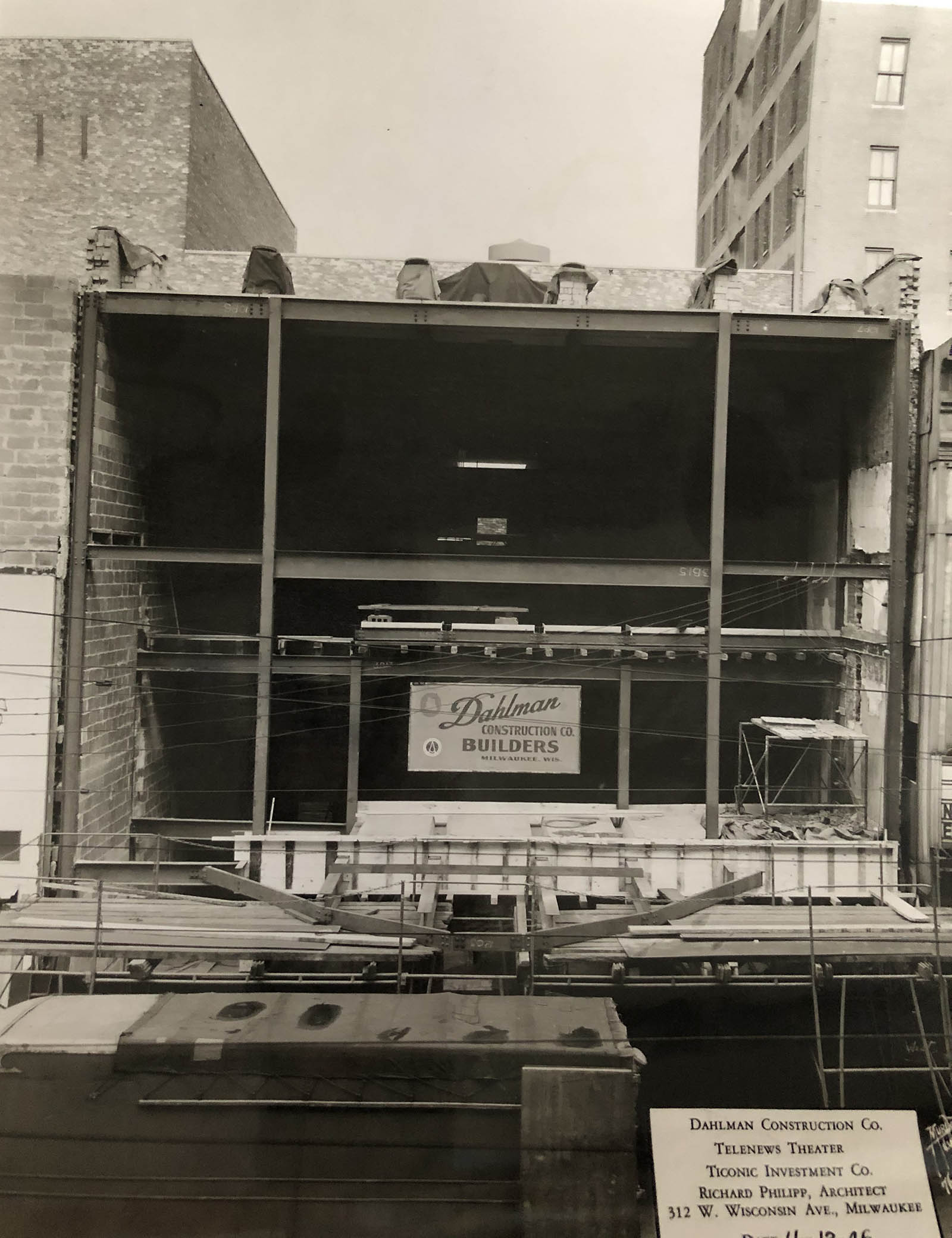 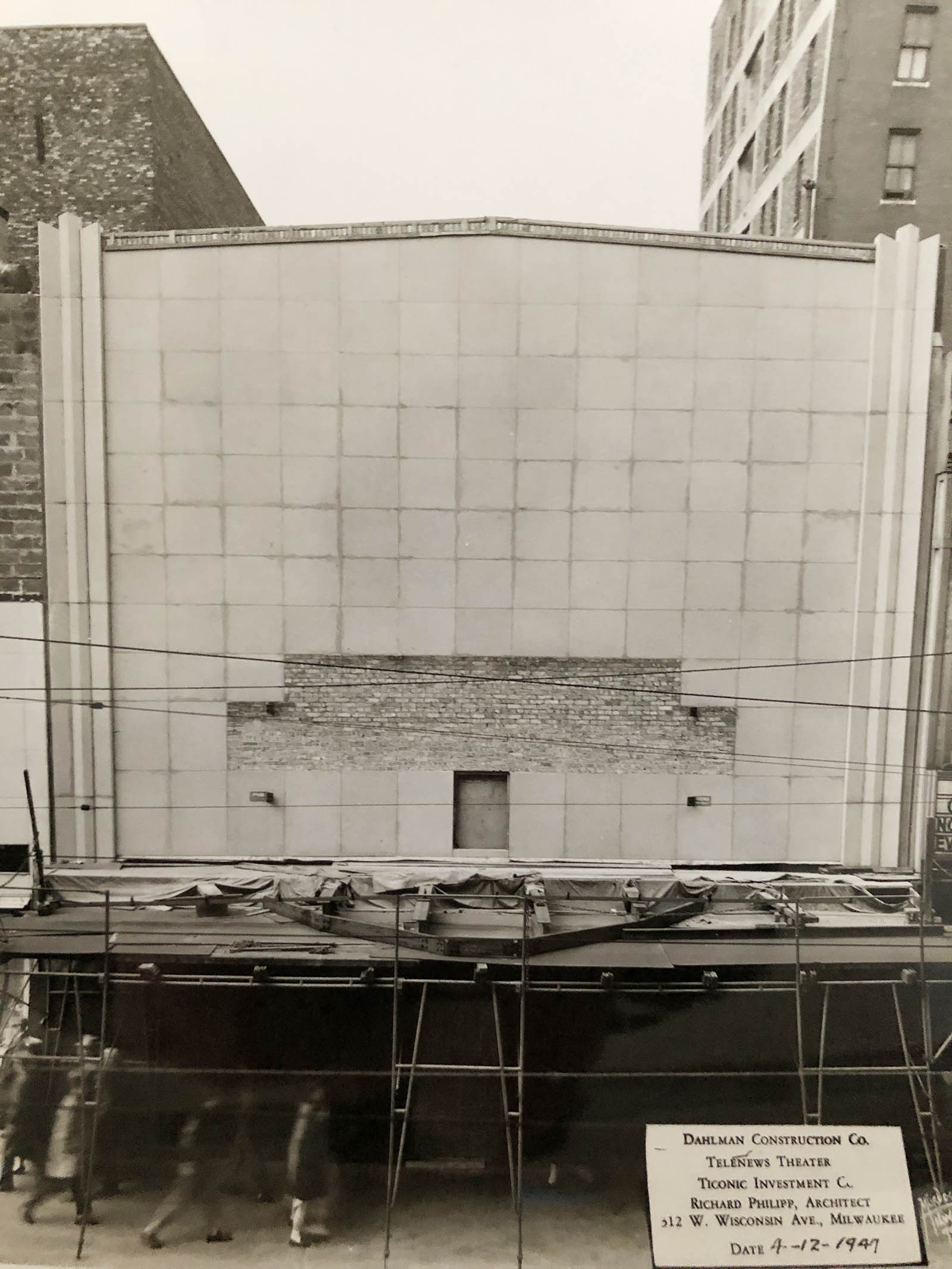 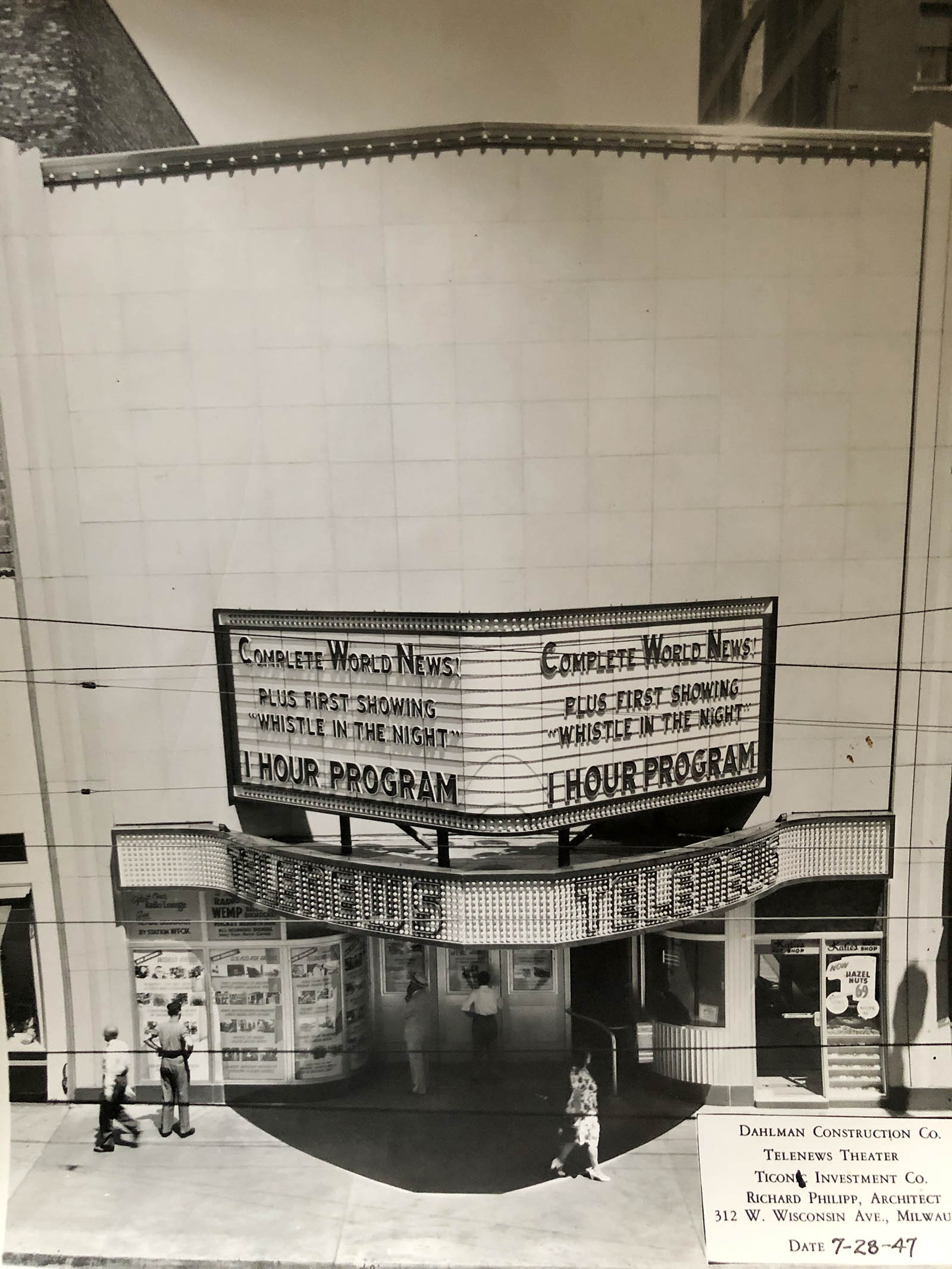 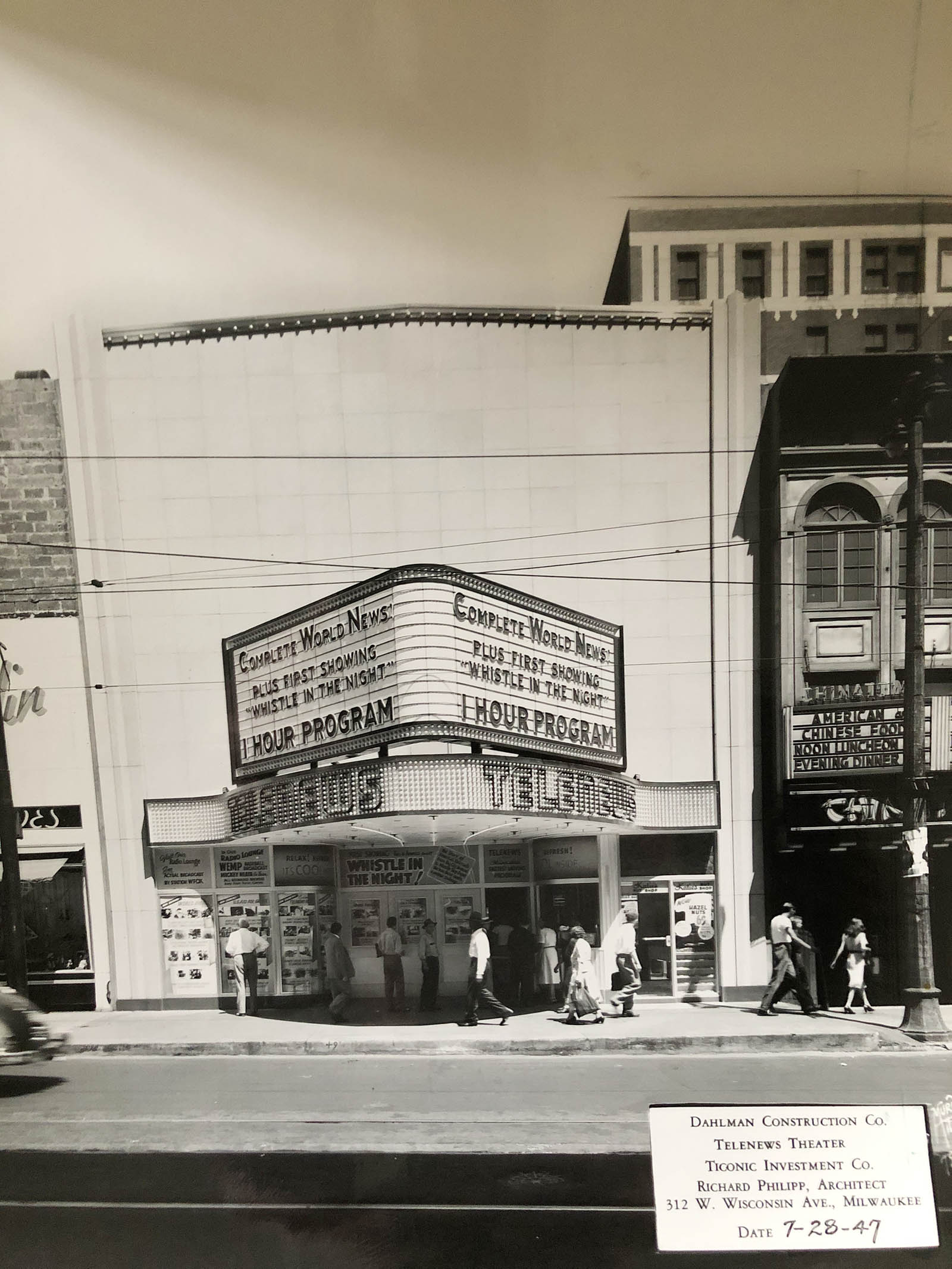