Get happy at the newly opened Angry Taco

The tacos in Milwaukee are apparently an emotional bunch. First we had The Laughing Taco in Walker's Point, and now we have The Angry Taco. But don't let the name fool you; you'll feel anything but angry snacking on these tacos and Mexican meals.

The tacos in Milwaukee are apparently an emotional bunch. First we had The Laughing Taco in Walker's Point, and now we have The Angry Taco, newly opened on Dec. 3 in the former Bruegger's on the corner of Water and Mason Streets.

But don't let the name and stern luchador logo above the door fool you; you'll feel anything but angry snacking on these tacos and assorted Mexican meals. 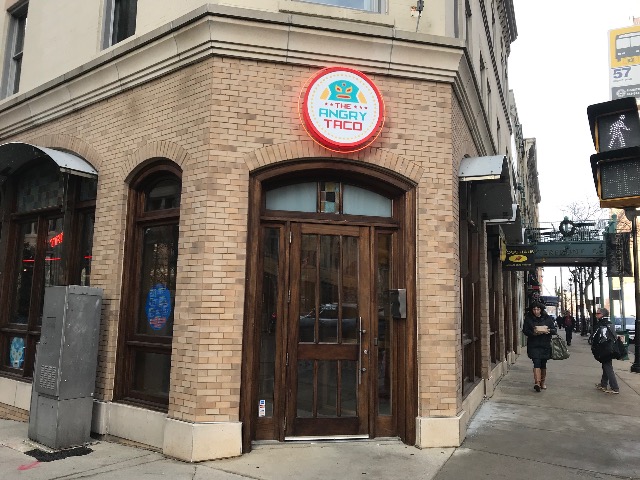 The lucha libre, or Mexican wrestling, theme extends beyond The Angry Taco's burly, bright logo. Inside the restaurant, assorted televisions play bombastic lucha libre highlights, and photographs of luchador masks and wrestling excitement adorn several of the warm burnt orange walls – especially further inside the space by the tucked away seating nook closer to the river.

Oh, then there's also the masked luchador guarding the door – and in case he didn't look fashionable enough, he's currently decked in the world's most festive suit. 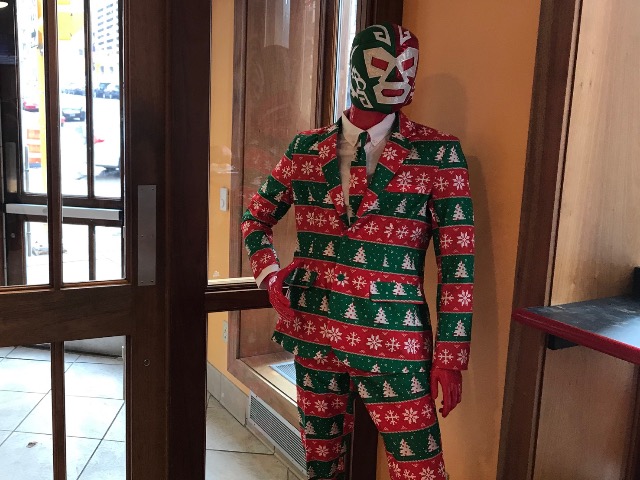 Lucha masks can also be found all over The Angry Taco's menu, which offers all sorts of Mexican classics including assorted burritos (steak, grilled chicken, al pastor pork and a vegetarian option), quesadillas (steak, chicken and pork), tamales (pork and chicken), nachos and snacks such as Mexican street corn and guacamole.

From 7 to 10 a.m., the menu also includes breakfast options like burritos and tacos packed with eggs, potato, chorizo and more. And on the flip side of the day, if it's five o'clock – or at least five o'clock somewhere – the menu also features several Mexican beer options and 16 oz. margaritas.

But obviously if you go to a place called The Angry Taco, you're going to try the tacos, ranging from ground beef to steak, al pastor pork, chicken and a veggie option (along with shrimp and fish on Fridays). The tacos come served on your choice of flour and corn tortillas as well as either "the Mexican way" – topped with diced onion and cilantro – or "the American way," which adds lettuce, tomato, onion and cheese for an extra 50 cents. 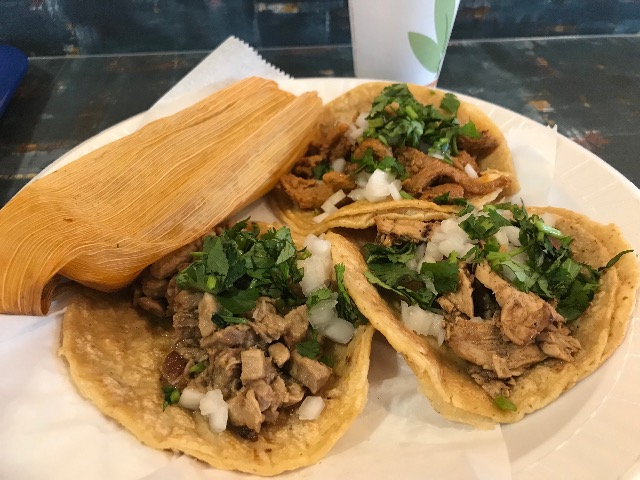 I ordered three tacos – an Asada Forever (steak), a Mr. Porkee (al pastor) and an El Gran Pollo (chicken) – each on a corn tortilla and each the Mexican way, plus a bonus pork tamale (because treat yo' self).

Each of the tacos were very tasty, with chewy succulent meat, pillowy tortillas, and just enough of a textural crunch and hint of sweetness from the finely diced onions. The steak was the standout of the bunch, juicy and featuring a pleasant hint of spice, though each of the tacos were meaty and filling – if maybe a touch under-seasoned, though it is early in the kitchen's life and surely kinks are being ironed out. Plus, if you crave a bonus kick in the buds, you can pour on some of the restaurant's flavorful salsa, offered in both regular and hot. (Want to put the angry in Angry Taco? Lather on some of the latter, which has a nice peppery heat to it.)

All of that also came in well under $15, as each of the regular tacos costs from $2.75 to $3.25 and the tamales cost just $2.50 each – certainly a fair price for a Downtown lunch or post-work bite. Plus, there are the daily specials, including Free Fall Fridays offering two tamales for $4; Wednesday Wins offering two carnitas (pulled pork) tacos for $5; and, of course, Taco Tuesdays offering $2 tacos all day. (Steak tacos are an extra 50 cents). On Mondays you can enjoy $7 nachos and on Thursdays there are $9 enchiladas, with rice, beans and your pick of beef or chicken.