Grand plans for Downtown: an in-depth look at the new food hall & more

Plans were unveiled this morning for the development and transformation of the former Shops of Grand Avenue -- now renamed The Avenue -- into an impressive array of reimagined spaces from a new innovative food hall to dynamic new and refurbished offices, unique apartments and engaging new retail concepts.

Plans were unveiled this morning for the development and transformation of the former Shops of Grand Avenue – now renamed The Avenue – into an impressive array of reimagined spaces from a new innovative food hall to dynamic new and refurbished offices, unique apartments and engaging new retail concepts.

Plans include adding third floor quarters for GRAEF, an employee-owned, full-service engineering, planning and design firm; second floor renovations resulting in an extensive, modern co-working office space; and a full renovation of the ground floor – between the Bublr headquarters and the West Arcade – to accommodate a brand new 35,000-square foot food hall, which will be among the most unique in the region.

Taken together with the dynamic developments in Westown like The Buckler, the Century Building, the MSO redevelopment of the Warner Theater, as well as the opening of Fiserv Forum, these plans aim to reinvigorate the storied intersection of Old World Third Street and Wisconsin Avenue marking a revolutionary turning point for Downtown Milwaukee. 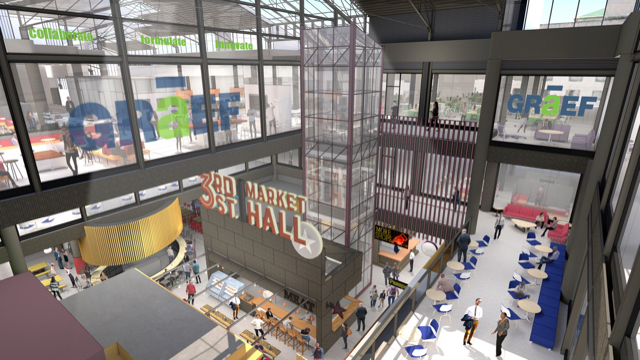 The heart and soul of the project begins with a much anticipated food hall, a concept which has been in the planning stages for over a year. The new venue will be called 3rd Street Market Hall and will occupy 35,000 square feet on the ground level of The Avenue, featuring as many as 21 vendors which reflect the culinary and ethnic diversity of the region.

Chris Socha of Kubala Washatko Architects, Inc., who was also integral to the design of the Milwaukee Public Market, says the design of the Market Hall – which will capitalize on the steel and glass structure which currently forms the foundations of the building – will be a bold, modern expression of both Milwaukee and its bright, energetic future.

"The space is being designed to encourage exploration," he says. "You’ll meander, find new little nooks at every turn. We see this as a true complement to other area venues including the Milwaukee Public Market and a new place to really experience the city."

Food hall curation is being spearheaded by Milwaukee restaurateur, Omar Shaikh, partner of SURG Restaurant Group, Wisconsin Ticket Concierge and Chairman for VISIT Milwaukee board and as an active member of the Wisconsin Center District board. And his vision for the project centers around the guiding principles of diversity, value, quality and community combined with a dedication to creating a space that’s reflective of the energy, charm and personality which defines Milwaukee Downtown.

In preparation for the project, Shaikh spent the better part of the last year traveling and engaging with personnel from food halls across the nation from Los Angeles and Atlanta to Denver, Minneapolis, Chicago and New York.

"You can tour so many of these places on YouTube," he says. "But I needed to go to each of them and really engage with the experiences. I needed to smell the food and know what the customer experience would be like. We also spent the time to talk with operators about everything they did to build their food halls, and what they would have done if they were to start all over again." 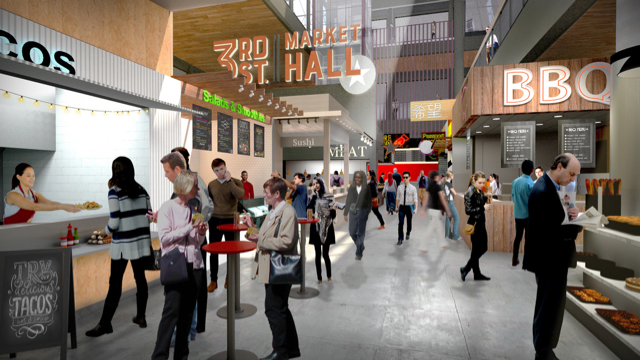 "We drew a lot of inspiration from the DeKalb Market Hall in Brooklyn," he says. "We literally spent three hours there the first time we visited. We walked in, and it was like a village in an alleyway. And there was something new around every corner. And we saw people from every walk of life. And that was the moment that it clicked. This is what we want for Milwaukee."

As a result, Shaikh says he’s made the commitment to creating and curating a food hall that contributes to Milwaukee’s growing reputation for innovative cooking and dining experiences, providing a space for culinary experimentation and incubation for the city’s new and upcoming talent.

"This is much more than just another food hall," says Shaikh. "And I’m incredibly grateful to the owners for having the patience and guts to do this in a way deserving of this historic location. We already have letters of intent for 75 percent of the locations within the space and they’re all chomping at the bit to be a part of what will become Milwaukee’s most eclectic and electric scene."

Among the concepts unveiled for the hall are six venues chosen for their ability to contribute to the overall mission and goals for the project.

Familiar names include Trueman McGee’s Funky Fresh Spring Rolls, a concept based on fresh, healthful grilled spring rolls made with fresh and local ingredients whenever possible; Stone Creek Coffee, a pioneer coffee roaster founded in 1993; Char’d, which will bring Korean barbecue, rice bowls and Korean fried chicken to the hall; and Waterford Wine & Spirits, an established purveyor of top-notch wines, which will offer a unique curational tasting and purchasing experience.

New concepts include Milk Can, a start-up concept from Chef Kurt Fogle and the team behind Muskego’s Bass Bay Brewhouse. The concept promises hometown classics including well executed burgers, cheese curds and housemade custard that takes the Wisconsin classic to a new level.

The hall will also welcome Donut Monster, a concept that has been revealed to area consumers through pop-ups at venues over the past number of months. Donut Monster will feature both housemade doughnuts and fried chicken sandwiches created by former SURG Chef Jackie Woods and his wife Sara.

Additional concepts, which will be announced in the months ahead, include BBQ, Italian and sushi. Shaikh says he is also looking for a vendor to provide a high quality fish market experience.

In addition to the above, the 3rd Street Market Hall will also feature both a beer hall and a central bar – which will offer a community gathering place complete with happy hour offerings – for food hall guests. The bar will sit adjacent to engaging interactive areas where friends and family can engage in activities from ping-pong and bocce to Jenga.

Once established, the food hall will also be activated to include a variety of surprises and entertaining experiences, from private events and food festivals to food tastings, musical performances and markets.

"We want this to truly be a gathering place," notes Shaikh. "We believe that’s key to this entire project. It’s a place where young professionals can come and work alone or meet with friends for lunch. We want a place where families can come … the parents can get drinks and the kids can go off and play jenga or bocce ball. It’s a place that’s really conducive to everyone."

In addition to the food hall, the former mall will receive a huge boost from the relocation of GRAEF’s office – formerly on Milwaukee's South Side – to The Avenue. Much of the facility’s historic space will transition to new offices designed to facilitate the exchange of goods, services, ideas and deal making in the heart of the region’s commercial hub.

According to information provided in a release today, GRAEF also sees its space at The Avenue as an opportunity for increased engagement with its 170 Milwaukee-based employees, from creative, forward-thinking workspaces to unparalleled downtown amenities including access to a state-of-the-art fitness center, a 100-seat innovation event center, a tenant lounge, parking and quick access to a world-class food hall.

"We are really pumped up to be relocating to Westown and The Avenue, acting as a further catalyst to the revitalization in Milwaukee’s historic center," said GRAEF president and CEO John Kissinger. "Being a part of The Avenue, and near other exciting developments including the Warner Grand Theater renovation and Fiserv Forum and its adjacent entertainment district, sealed our relocation decision.

"As engineers, planners, technicians and designers, we see not only what is, but have a vision for what will be, and our vision has taken us downtown to The Avenue."

Other Downtown businesses and organizations are exploring options to locate to The Avenue’s refurbished historic offices in the Matthews Building and other intriguing pockets.

The Avenue’s premiere contribution to downtown living will be the Plankinton Clover, a development featuring 52 apartment units ranging in size from studios to two bedrooms. The development will include the city’s first "work/live" units, making novel use of their historic Plankinton Arcade environment by introducing storefronts and floor to ceiling windows overlooking West Wisconsin Avenue, North Plankinton Avenue, and North 2nd Street.

In addition, many of the units will have entrances from common corridors that connect to the second floor atrium, essentially turning the atrium into a public street in the middle of a neighborhood. Amenities will include Rhe Avenue’s dog wellness area, fitness center, a tenant lounge, a private movie theater, access to the innovation convention center as well as bicycle storage and premier parking.

"Look at old photos of the Plankinton Arcade and you’ll be struck by the feel of a quaint urban neighborhood," said Tony Janowiec, co-owner of The Avenue. "The Clover recaptures that sense while providing residents with ideal work/live opportunities as well as highly-connected interim living options for corporate employers."

According to Janowiec, CEO of Interstate Development Partners, demolition has already begun on the vacant spaces of the former mall. The goal is to begin construction on the first phase of the project this spring, with a rollout of the 3rd Street Market Hall by the end of 2019.

The Avenue food court will continue operations through Feb. 28 and the building will close to the public to accommodate construction.

"As others have correctly noted, a vibrant downtown must have spaces for people of different backgrounds and cultures to interact and we take our role in that extremely seriously," added Josh Krsnak, Janowiec’s partner.

"We understand that due to our unique locale as a crossroads, we have a responsibility not only to connect all the activity happening to our immediate north, south, east and west – but also to provide a place where everyone in our region feels at home."