What's better than a patio? An entire yard at The Backyard

This Bay View bar that asks why hang out on a mere patio when you can relax in a miniature beer garden - complete with green grass, fun games, good beer and great company.

It’s a gorgeous summer night, and the warm air is filled with the soundtrack of brats and burgers sizzling on the grill, good conversations echoing from each part of the yard and a mid-season baseball game providing the modest background music. It feels like a simple, easy-going night with friends in your backyard – close, but it’s actually The Backyard, a Bay View bar that asks why hang out on a mere patio when you can relax in a miniature beer garden filled with green grass, fun games, good beer and great company. 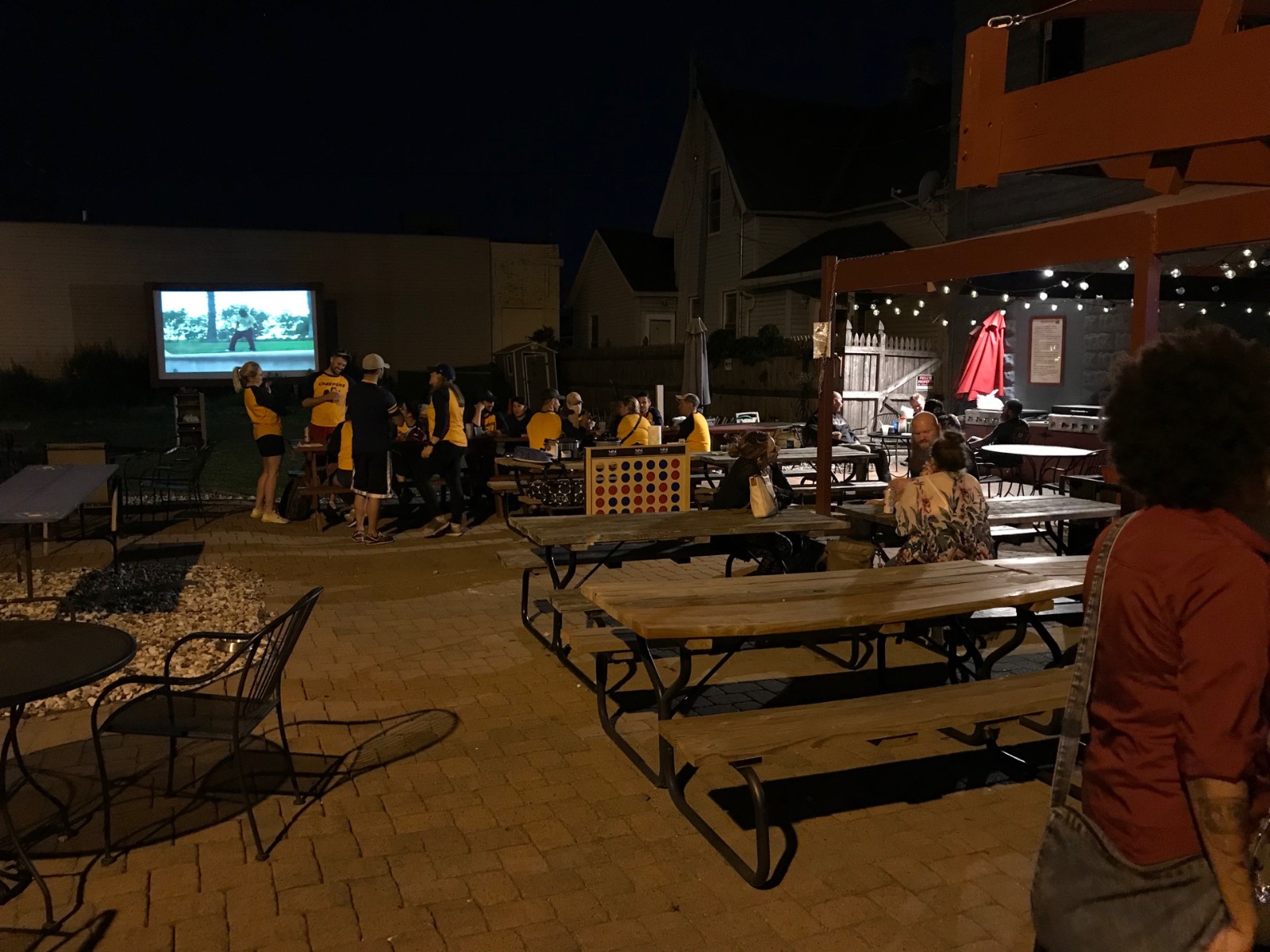 Pop inside The Backyard – opened in November 2011 at 2155 S. Kinnickinnic Ave. in the former Telluride space – and the proper indoor bar itself is nothing special, a simple and small yet satisfyingly cozy neighborhood spot with some TVs, a pool table, some other bar games, an uncomplicated assortment of drinks ranging from classic macros to local craft brews and harder stuff, a few basic bar pizzas, and a glowing bar sign that very bluntly announces "BAR," a fitting piece of décor for the no frills interior. 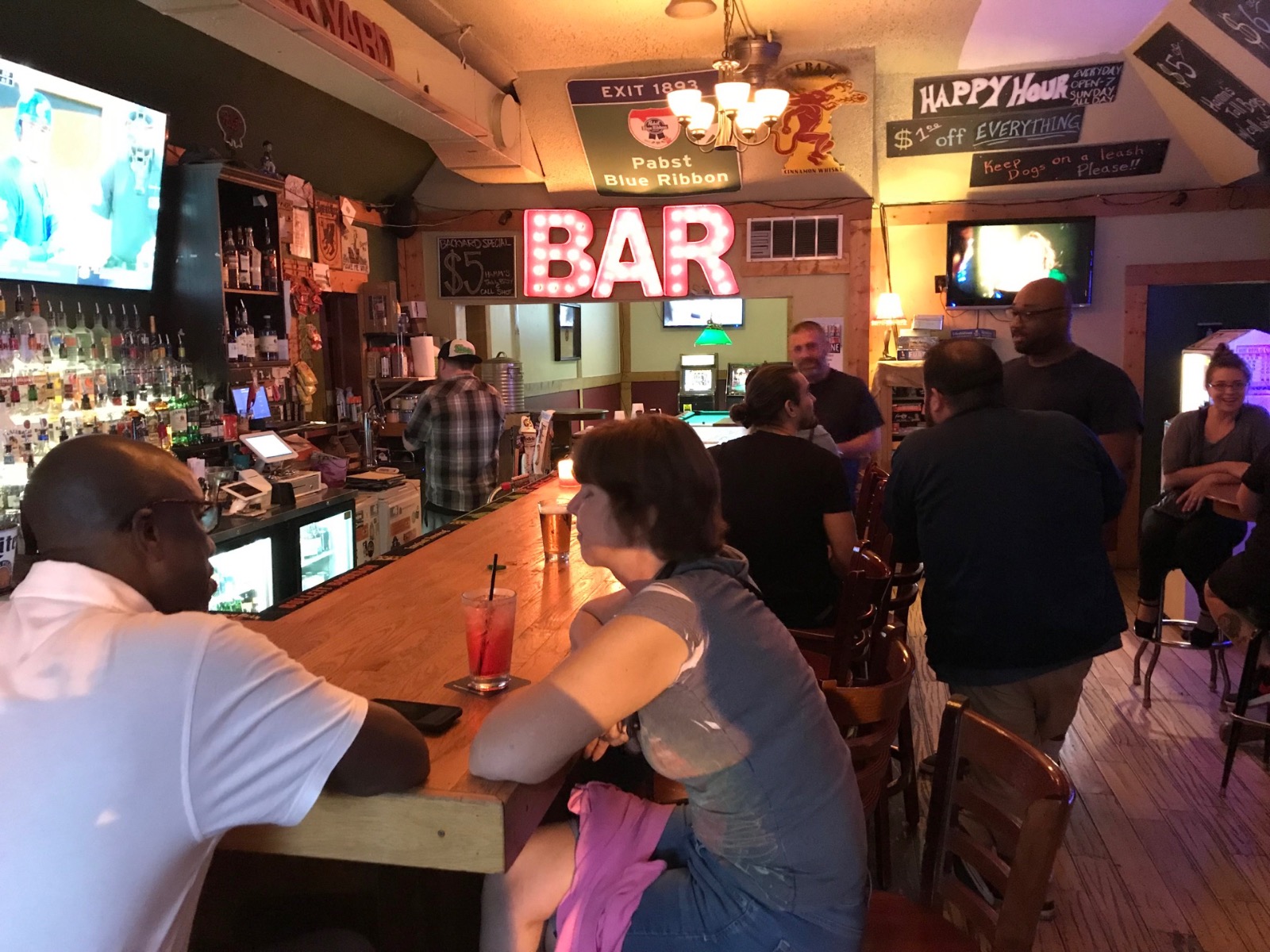 Venture through the side door, however, and you’ll quickly discover how it earned its name: a massive grassy backyard (or more accurately, side-yard) with a paved patio area, a bonus outdoor bar, a lineup of grills waiting for your groceries, some bag toss courts and a big projection screen.

Amazingly, while the idea of utilizing the next door lot as a patio was obvious to Leaf when he first bought the bar, the eventual name was less so.

"We were about to open up, but we still didn’t necessarily have a name. But we knew we had this huge patio," he explained. "After checking around names for hours, someone came up and said, ‘You have the hugest backyard. Why don’t you call it The Backyard?’ It was just the perfect fit." 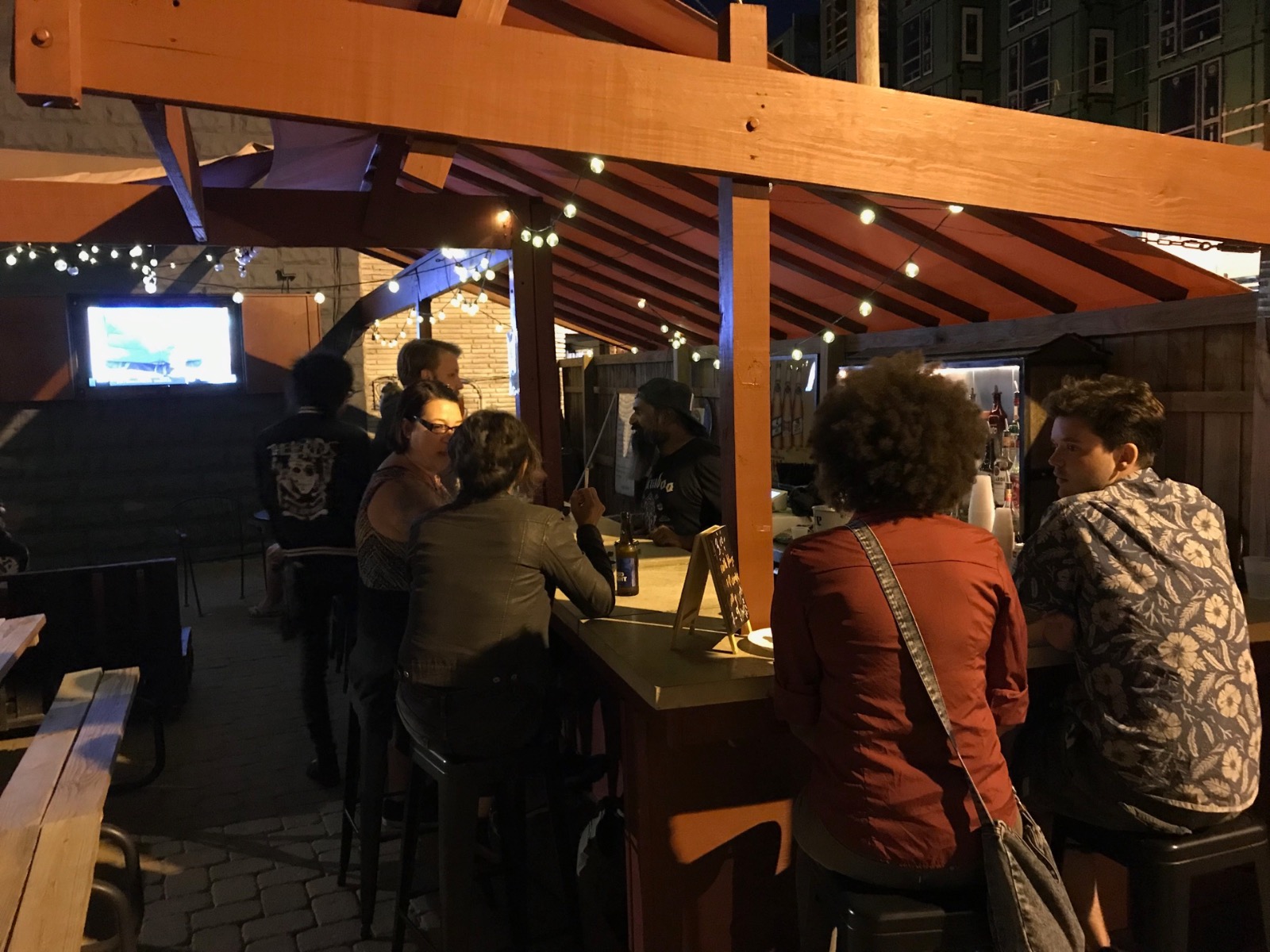 Over the years, The Backyard evolved its titular element into the showcase feature it is today. When Leaf took over the bar from Telluride, the lot was mostly a blank canvas, just a grassy green space with some paved patio room. So, within the first year, he added a canopy, a television and – one of its most unique and backyard-esque attributes – a trio of outdoor grills, open to anyone to bring in their burgers, sausages and other snacks for cooking out.

"From day one, it was there, but it kind of progressed with the backyard idea. My background is more in real estate, and I had no real experience in food. Other family members own taverns and burger joints, and they’re like, ‘If you don’t have to serve food, you probably shouldn’t do it; it’s a big headache,’" he laughed. "So we came up with the idea that customers could come hang out and create the backyard feel."

After those original additions, The Backyard expanded that entertaining beer garden-like atmosphere with an outside bar, serving up a variety of basic mixed drinks as well as canned brews and seltzers along with extra seating. Leaf also added a bag toss area where – always a popular game at the bar, but now made official with better and more level boards. The Backyard often hosted bags leagues, and while those have fallen off in recent years, according to Leaf, he’s open to bringing them back in the future. 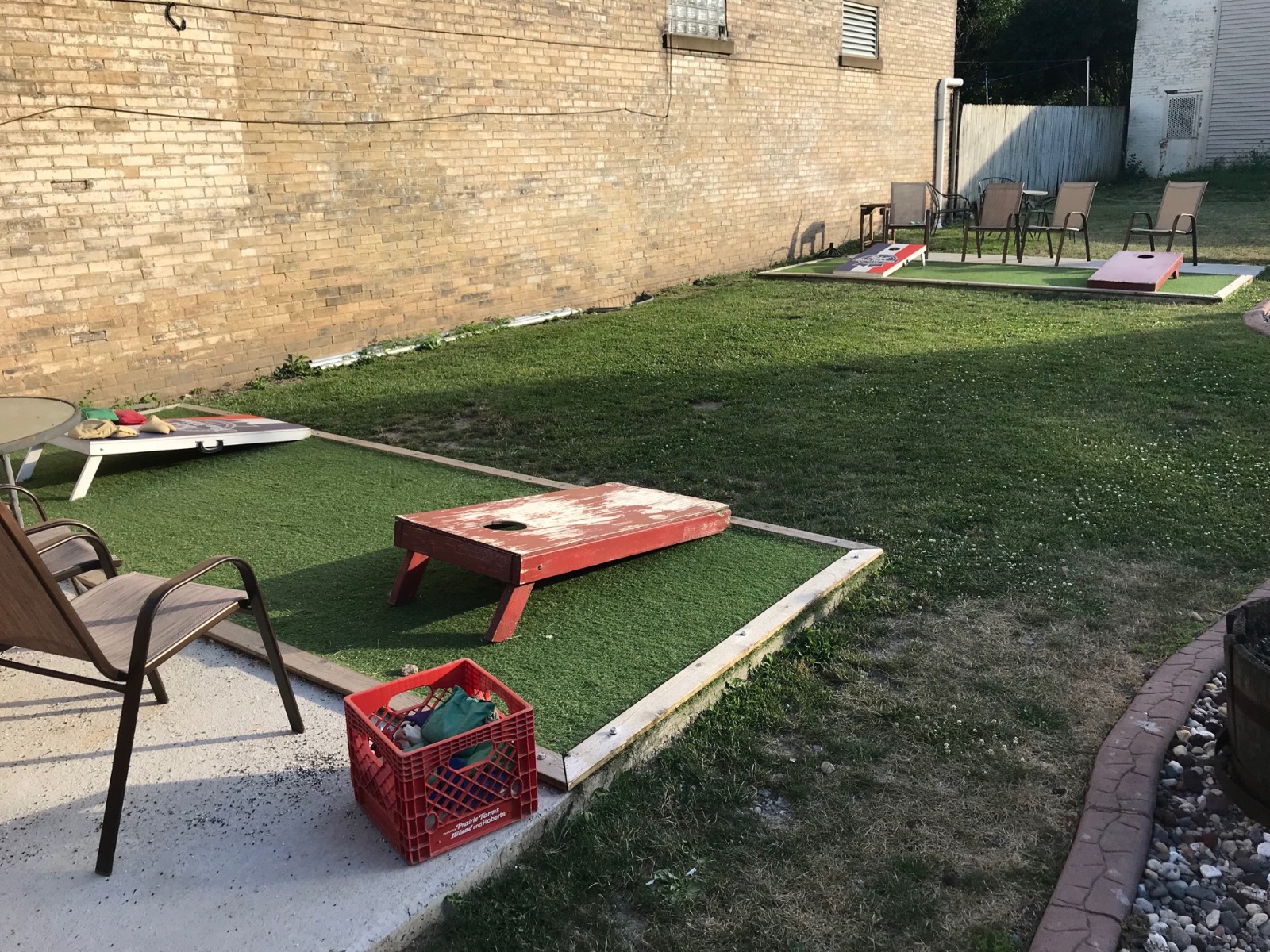 The latest addition is the outdoor projector and screen, originally used for movie nights but now used for Brewers, Packers and other sporting events, as well as short film showings for Gallery Night and additional unique programming. Just this past week, locally made skate videos lit up the giant screen – and Leaf notes that while licensing issues halted their early movie night plans, they’re looking into those rules and bringing those weekly screenings back to The Backyard. 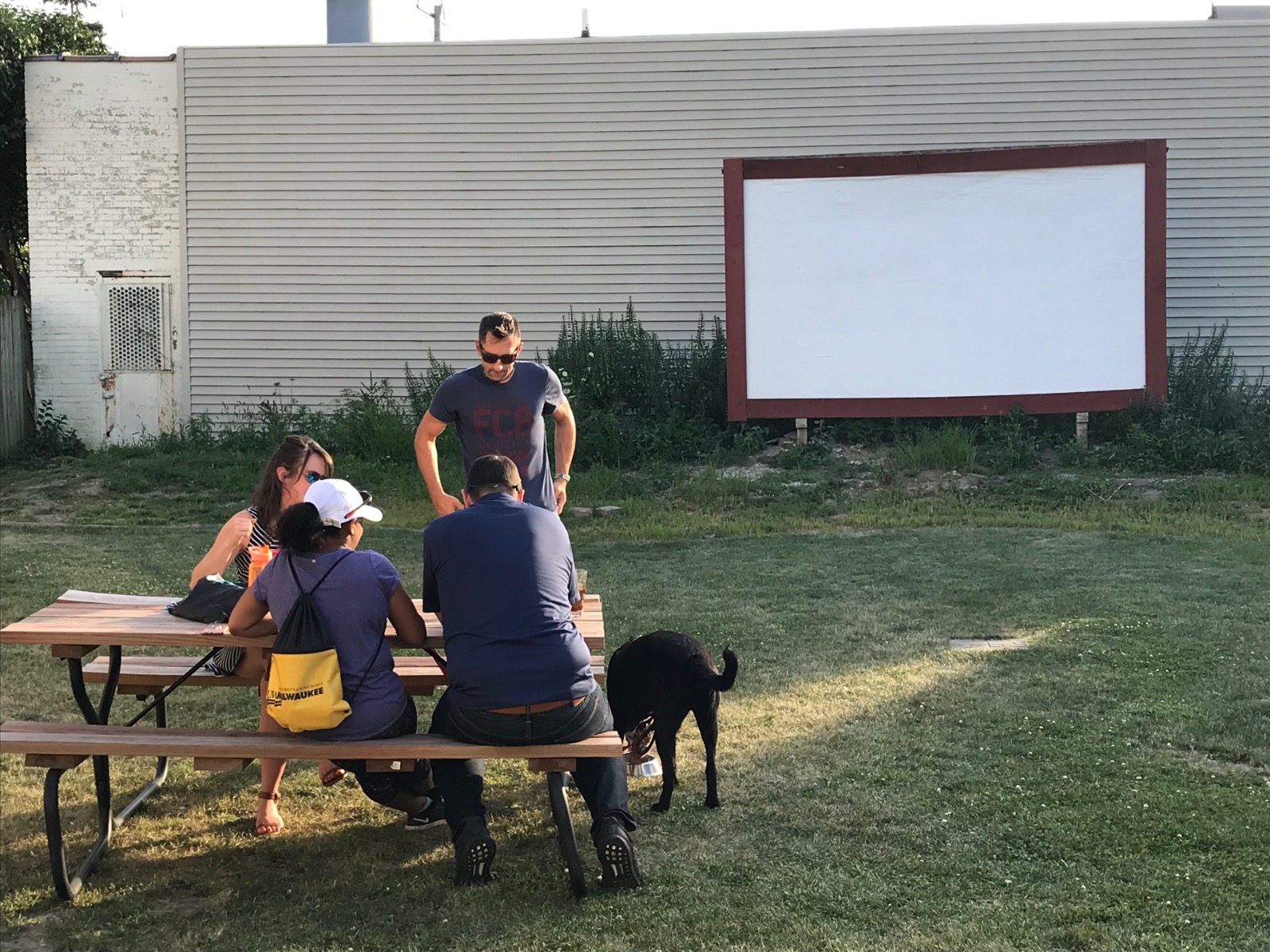 The result of all Leaf’s work is less a bar than a relaxed neighborhood house party but nobody has to clean up afterwards. (Well, the bartenders do – and a gracious hat tip, as well as a generous monetary tip, to them.) Whether you’re gathered around the fire pit, watching the game on either the big or small screen, playing bags or big Connect Four, grilling out your supper – or merely a soaker pad for the rest of the night – or just hanging at the outdoor bar or sitting at the picnic tables chatting it up, there’s something for everyone in the space. That includes your pupper as well, as The Backyard is dog-friendly inside and out as long as it’s on a leash and well-behaved.

But here’s the big twist: The Backyard doesn’t technically own its backyard.

In addition to taking over the bar from Telluride, Leaf also took over its lease on the outdoor lot – but he does not own the space, and in fact, it’s been for sale for several years now. Leaf, however, isn’t concerned. He noted that he may someday purchase the lot – which extends back to the two buildings on South Robinson Avenue – but The Backyard also has other areas to potentially expand and grow, whether into the building’s upstairs or toward its actual backyard, where he envisions an all-seasons patio space.

"The backyard may look a little different … but it could definitely still be the same," Leaf said. "But The Backyard’s not going away, that’s for sure." 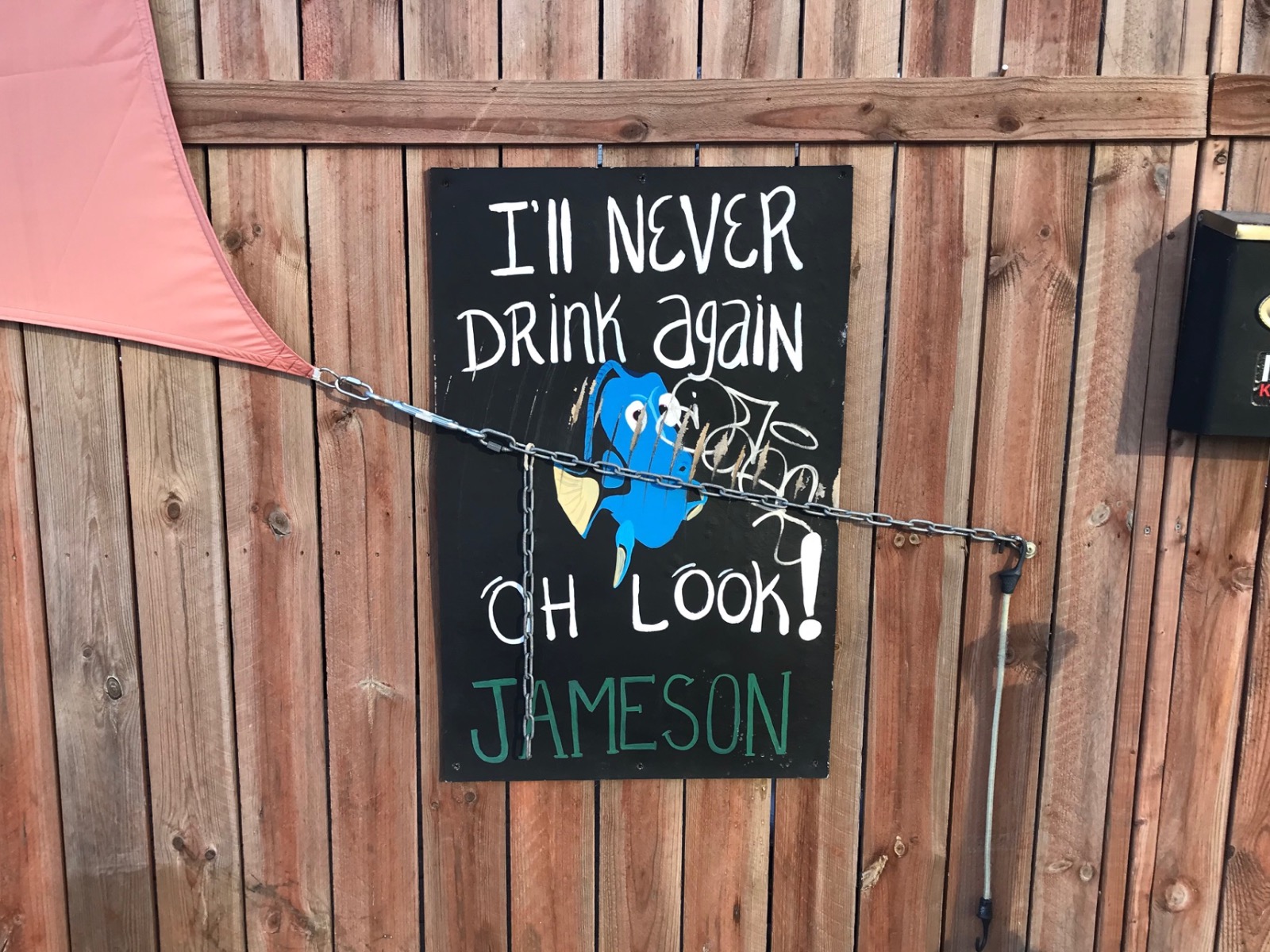