Kira Renkas knew almost nothing about producing a play, but she's doing it anyway. Her production of "The Children's Hour" runs this summer in collaboration with Outskirts Theater Company.

Kira Renkas knew almost nothing about producing a play, but she's doing it anyway.

Renkas, an actor with a BFA in acting from the University of Wisconsin-Milwaukee’s prestigious theater program, is a huge fan of the play and film of "The Children’s Hour," and last summer, decided she was going to create her own version of it. 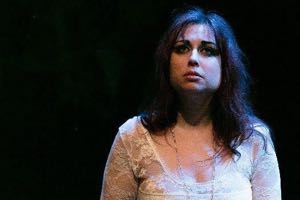 The performances will take place July 20-22 and July 27-29 with a Pay-What-You-Can Night on Thursday, July 19 at the Brumder Mansion, 3046 W. Wisconsin Ave. Dylan Sladky will direct the show.

Lillian Hellman wrote "The Children’s Hour" in 1934 and in 1961 it was made into a film starring Audrey Hepburn and Shirley MacLaine.

"Both the play and the film were extremely groundbreaking and provided a strong voice for women of all ages," says Renkas. "Hellman was ahead of her time that she was able to provide this voice for all types of women, not just women of different ages, but women of different sexual preferences as well."

The story revolves around two best friends who open a boarding school for girls and almost lose everything after a spoiled, bitter student accuses them of being lesbians.

"It was the 1930s and being a lesbian was considered a disgusting abomination by many people," says Renkas. "So (in the play) parents and grandparents started pulling their children from the school."

Both inspired and saddened by the relevancy of the play’s message in our modern day, Renkas decided she was going to produce it in Milwaukee.

"I knew I wanted to do this, I just didn’t know how to get started. I had never done anything like this before, but I thought, 'why not? What does it hurt to try?'" she says.

And try she did.

Renkas approached 10 to 15 local theater groups and was eventually contacted by Ryan Albrechtson from Outskirts Theatre Co. Outskirts was already committed to a season dedicated to material about strong women, so "The Children’s Hour" fit well with the theme and Albrechtson agreed to partner with Renkas.

"He’s given me the freedom to do whatever I need to do to make this show work," says Renkas. "I appreciate his trust so much."

Renkas serves as the show's producer, costume designer and will play the role of Karen Wright. Actors – both adults and children– are still needed and auditions are set for May. Interested actors should contact Outskirts Theatre Co.

As the producer, Renkas has worked tirelessly to raise funds. Fixture Pizza Pub, This Is It and a couple of other local businesses have been supportive of her efforts.

On Thursday, April 12, This Is It will host a bingo fundraiser for "The Children's Hour" starting at 5 p.m. Proceeds from the bingo games and a portion of drink sales will go directly toward the production.

"I am so grateful to all of the support I’ve received so far," says Renkas. "That’s the cool thing about Milwaukee. You can get an idea in your head, and then you can really make it happen."

Stay tuned to OnMilwaukee for more information about and a review of "The Children's Hour" this summer.