The MECCA name will return ... on a new sports bar and grill by Fiserv Forum

The MECCA name is returning to Downtown Milwaukee - just not attached to the original location. Instead, it'll move just down the street to the new MECCA Sports Bar and Grill, coming to the entertainment block outside the Fiserv Forum.

The MECCA name is returning to Downtown Milwaukee – just not attached to the original Milwaukee Exposition, Convention Center and Arena. Instead, it'll move just down the street from its former home to the new MECCA Sports Bar and Grill, coming to the entertainment block outside the Fiserv Forum.

"The MECCA Sports Bar and Grill will be a major attraction for Milwaukee’s passionate sports fans," said Michael Belot, Senior Vice President of Bucks Ventures and Development, in a press release. "The Entertainment Block has a bold future, and we are proud to give homage to the Bucks’ rich past by bestowing the sports bar and grill with the MECCA name."

Moving into the same central building as Good City Brewing, The MECCA Sports Bar and Grill will feature two full-size bars and a variety of seating for 600 patrons scattered across two floors – from outdoor seats on both levels to the large main  bars and arena-style seating on the second floor. Most important, however, for a sports bar and grill, The MECCA will include state-of-the-art sound and picture – including a 36-foot HD screen centerpiece – for watching sports of all sorts. 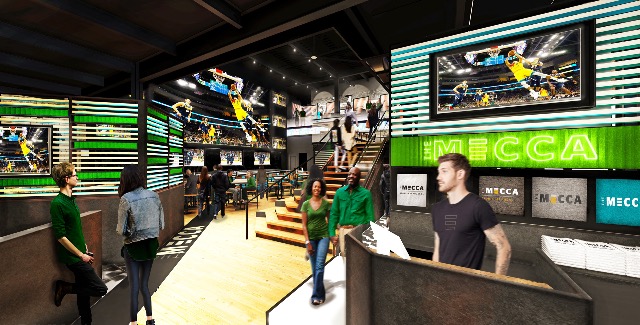 "We are thrilled to extend our esteemed food and beverage program beyond Fiserv Forum into The MECCA Sports Bar and Grill," added Justin Green, Vice President of Hospitality for the Bucks, in the release. "Guests will enjoy an elevated sports bar culinary experience with incredible versions of sports bar fare along with signature items that will surprise and delight."

The MECCA Sports Bar and Grill is expected to open in late April. Stay tuned to OnMilwaukee for more updates on The MECCA and other entertainment block updates.

And to think your dad JUST finally stopped calling the UWM Panther Arena the MECCA. He's going to be so confused ...