The Metal Grill in Cudahy has closed

The Metal Grill, a venue which has served up both raucous head-banging music, bacon-centric apps and burgers, closed abruptly on Friday. The venue's closing was announced on Facebook and has since been listed for sale.

The Metal Grill, a venue which has served both raucous head-banging music, bacon-centric apps and burgers, closed abruptly on Friday.

Formerly home of The Blue Pig and Vnuk’s Lounge, the bar, restaurant and music venue at 5026 S. Packard Ave. in Cudahy was owned by Theresa and Neil Borkowski. They opened the venue in 2013 and have hosted countless shows in the space, including a recent 18+ show featuring Goatwhore, Anciients, Anomaly & Khazaddum.

The Borkowskis announced the closing last night on Facebook. 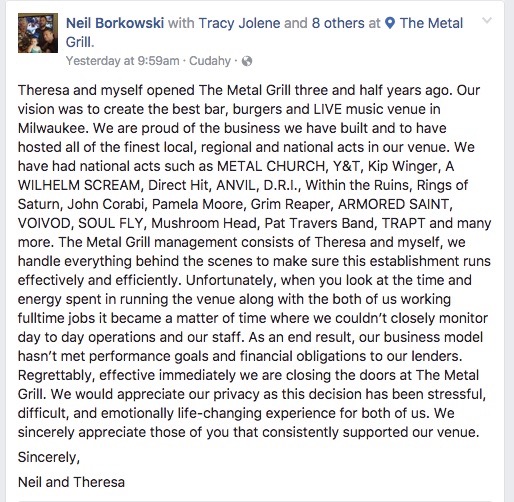 Since that time, the venue has also been posted for sale on Craigslist. 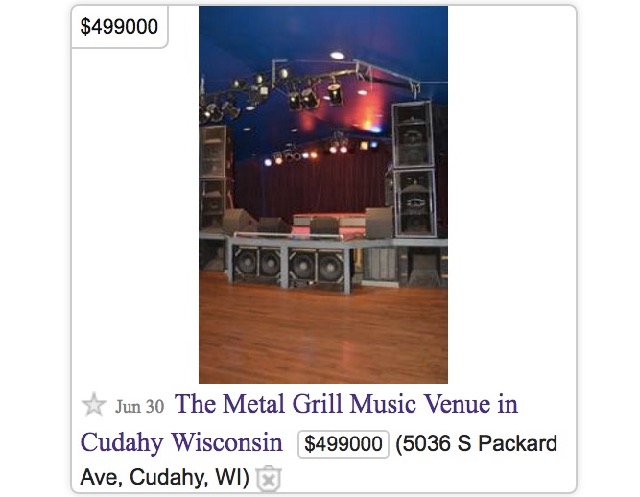 The description reads: "Located in Cudahy, Wisconsin, The Metal Grill has hosted local, regional, and national acts over many years (including Trapt, Smile Empty Soul, and Kip Winger, just to name a few).

"The property has several unique attributes that will facilitate significant growth for a new owner. The Concert hall capacity is approximately 200 and there is a large outdoor area that could be converted into a beer garden. Opportunity abounds, however present ownership simply does not have the time to capitalize on them. Further, this property generates rental income through the upper level apartments.

"This is an ideal opportunity for someone already in the entertainment industry, or someone whom is looking for a turn-key opportunity to which they can bring their own ideas. Current ownership looks forward to transitioning the business (training a new owner), including day to day operations and music agent introductions (for booking live music)."