There's a brand new restaurant opening its doors in the heart of Germantown this week, and it promises to offer an experience unlike any other venues in the area: Precinct Tap + Table.

There’s a brand new restaurant opening its doors in the heart of Germantown this week, and it promises to offer an experience unlike any other venues in the area. 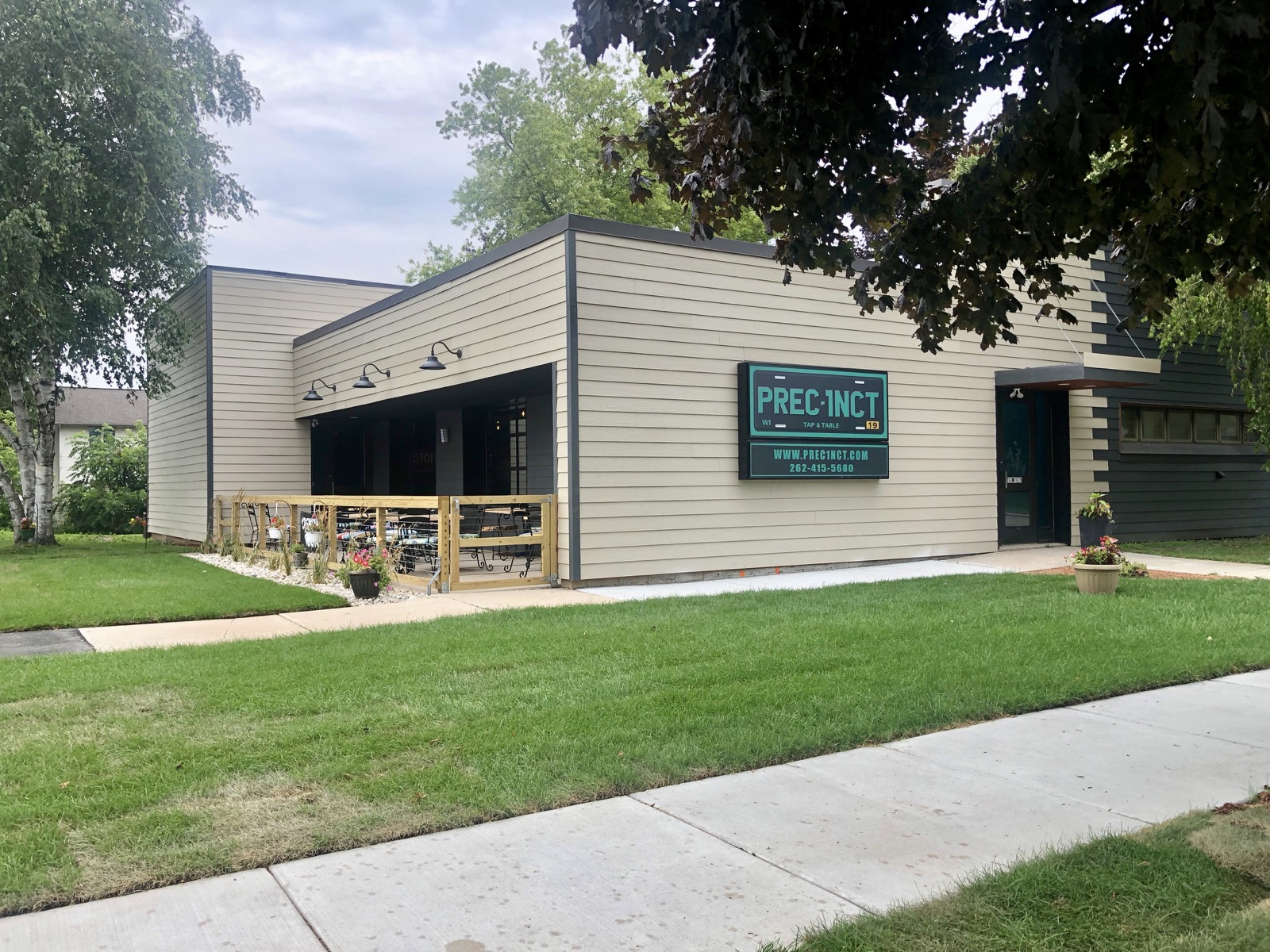 At the helm is Jodi Janisse-Kanzenbach, a chef who blazed trails opening her first restaurant, Cafe Soeurette, in West Bend in 2007; and her new project promises to do the same in Germantown.

The popular cafe, which closed in late June to make way for the new project, was among the first restaurants in Washington County to adopt a farm-to-table ethos, sourcing both meats and produce from local farms and taking regular advantage of the weekly farmer’s market just outside their front doors.

Cafe Soeurette regulars will also be welcomed by a sea of familiar faces, including sous chef Kyle Pett, Katie Jacobson (known for her creative cheesecakes) and beverage director Mike Willavage, who was part of the opening team at the West Bend Cafe.

"My staff believed in this," notes Janisse-Kanzenbach. "And almost every one of them followed me to the new restaurant. We’re a team and a family. And I’m really so happy about that." 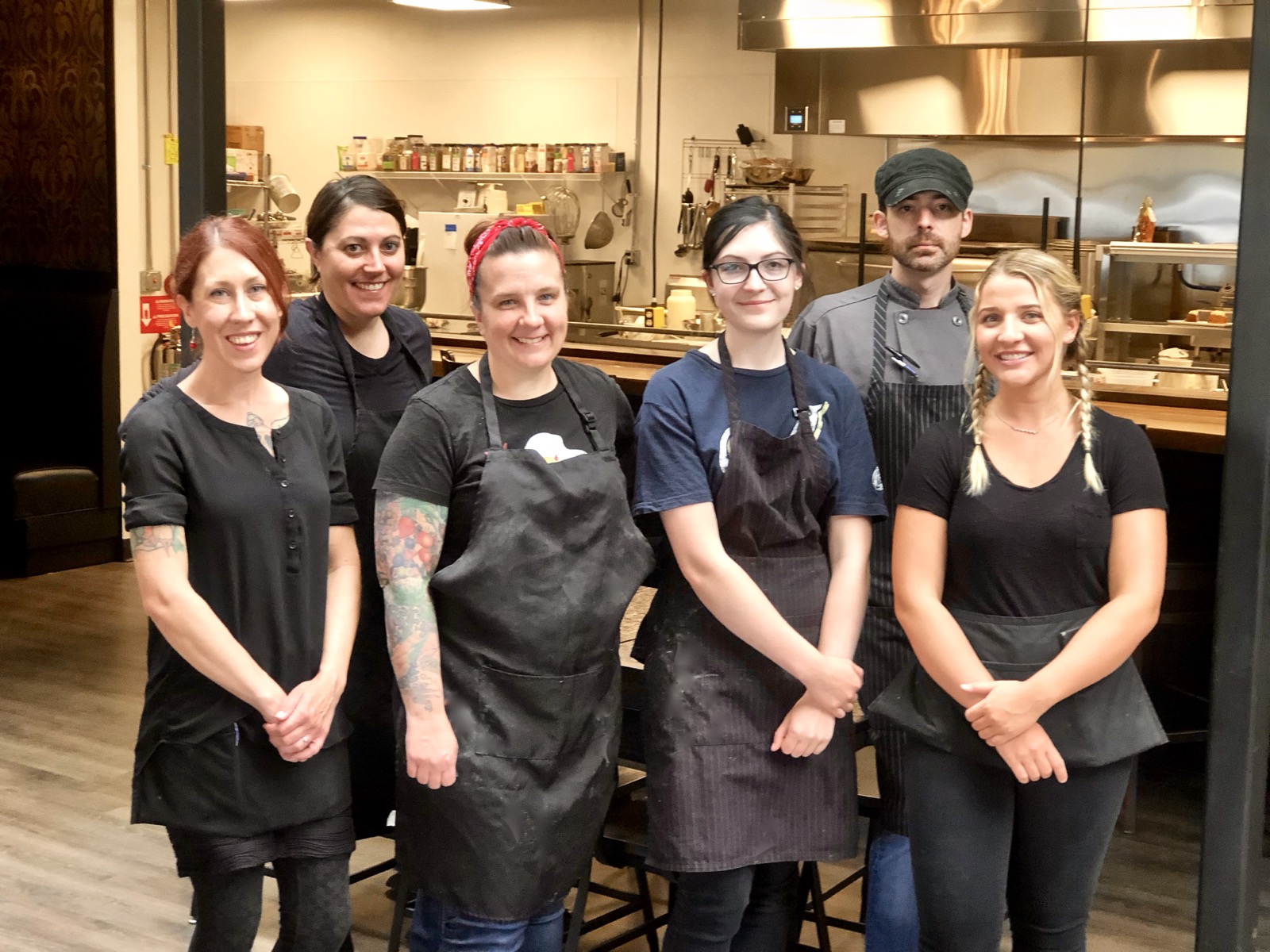 "I opened my first restaurant by the seat of my pants, but I wanted to do this the right way," says Janisse-Kanzenbach, who says the decision to close Cafe Soeurette and open Precinct was a combination of necessity and serendipity

"Operating a restaurant in a leased space for so many years made eventually owning our own building pretty important to us. We wanted the opportunity to build a concept from the ground up, and we loved the idea of making the restaurant accessible to a larger market."

To find the right spot, she enlisted the help of Deb Reinbold at the Economic Development of Washington County, who assisted her in identifying locations with favorable demographics and affordable real estate.

Along the way, a business partnership developed. Reinbold and her husband Don – who also own and operate the Barley Pop Pub & Restaurant in Germantown – brought on Janisse-Kanzenbach and her husband Cory as operating partners for their restaurant.

They also offered up a long vacant building – which once housed the Germantown Police Department – as the site for Janisse-Kanzenbach’s new restaurant. It was a win-win.

"We have a dedicated parking lot," she adds. "The restaurant is ADA accessible, and we’ve built the restaurant that we really wanted."

Those same colors are reflected in a graffiti-style mural created through a collaboration with Josh Ebert and Jon Bartels of Walker’s Point Tattoo. It’s a personal piece which pays homage to Janisse-Kanzenbach’s love for tattoos and her husband Cory’s low-rider hobby. Look closely, and you’ll see their son Drake’s name emblazoned in yellow. 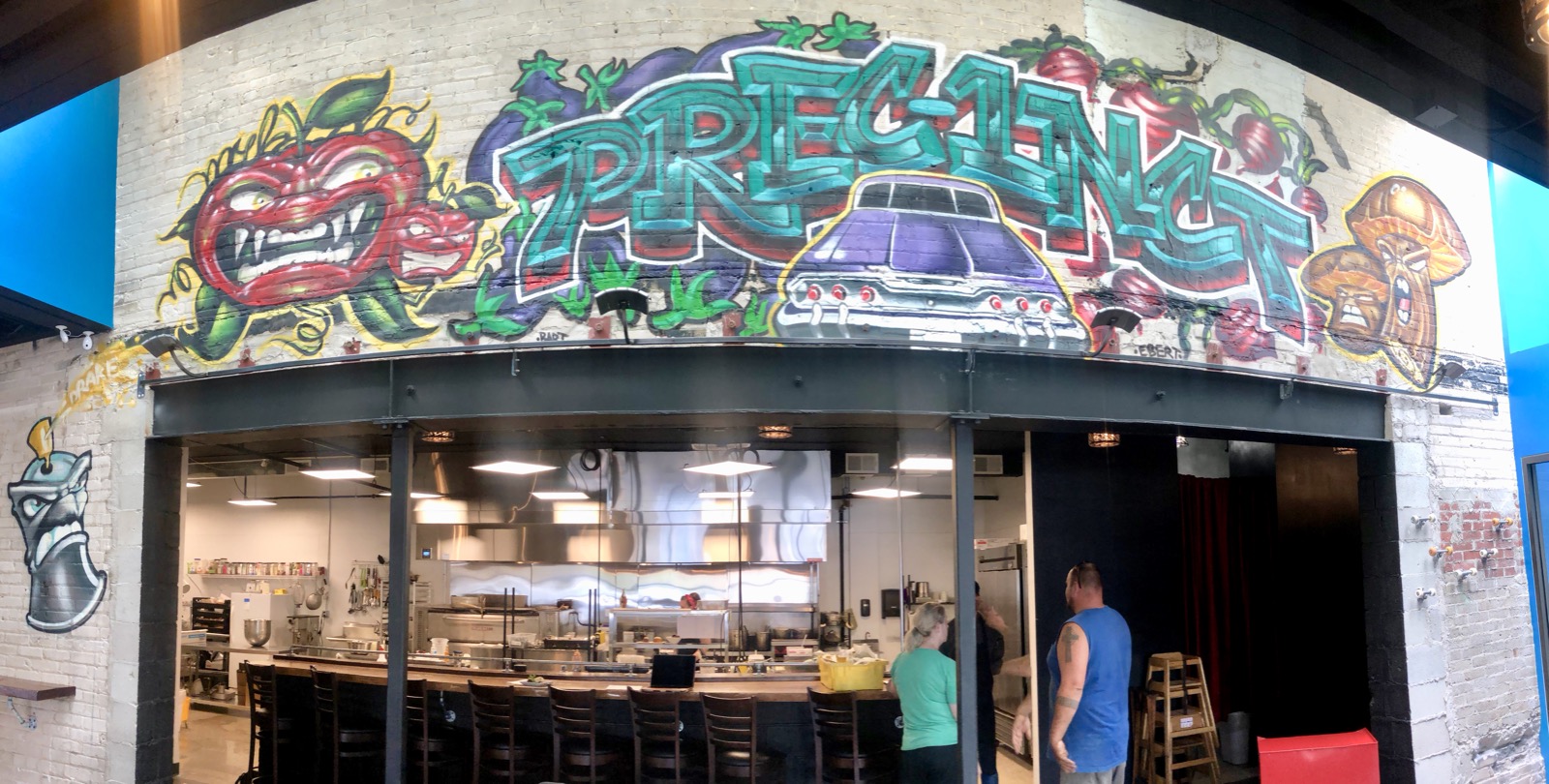 The dining room, which accommodates about 60, offers seating at low-top tables and half-moon booths repurposed from The Underground bar at Cafe Soeurette. 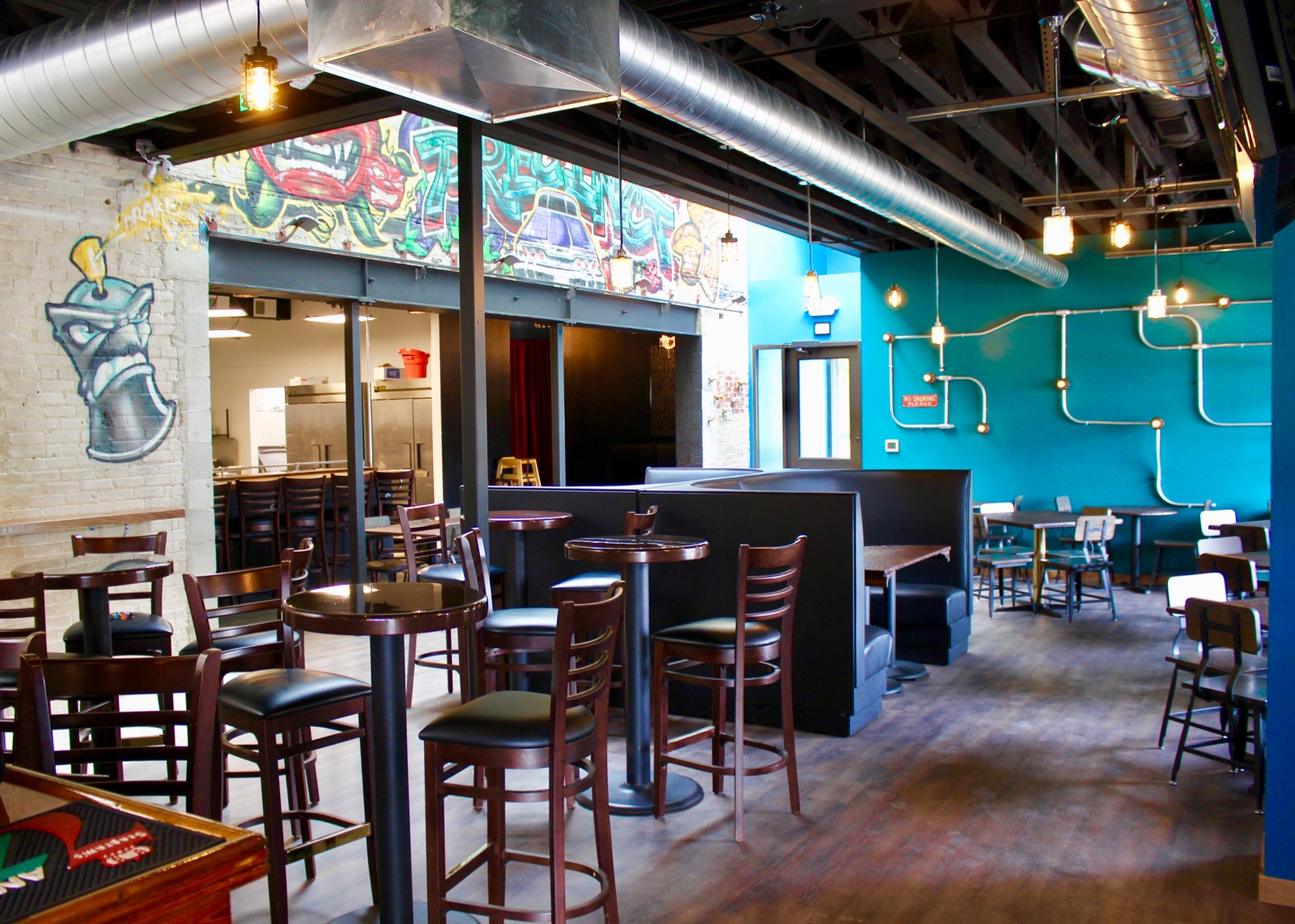 Unlike Cafe Soeurette, Precinct is bright. During the day, sunlight streams into the restaurant through skylights that run most of the length of the dining room. And the Southern wall features two garage doors which open out onto the restaurant’s enclosed patio. 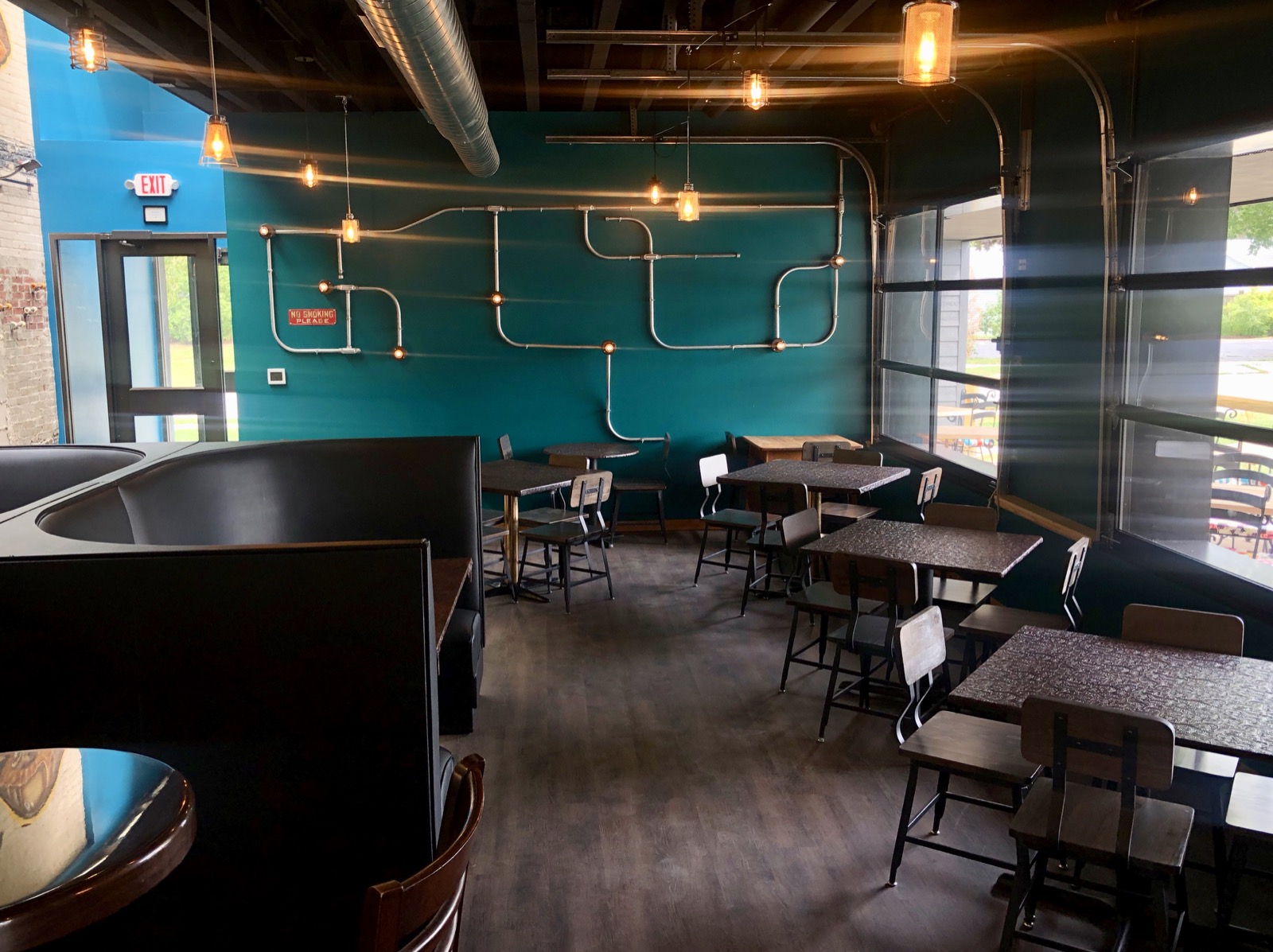 "It was totally time for us to get out of the basement," notes Jacobson. "But it’s crazy. I feel like I should be wearing sunglasses in here all the time." 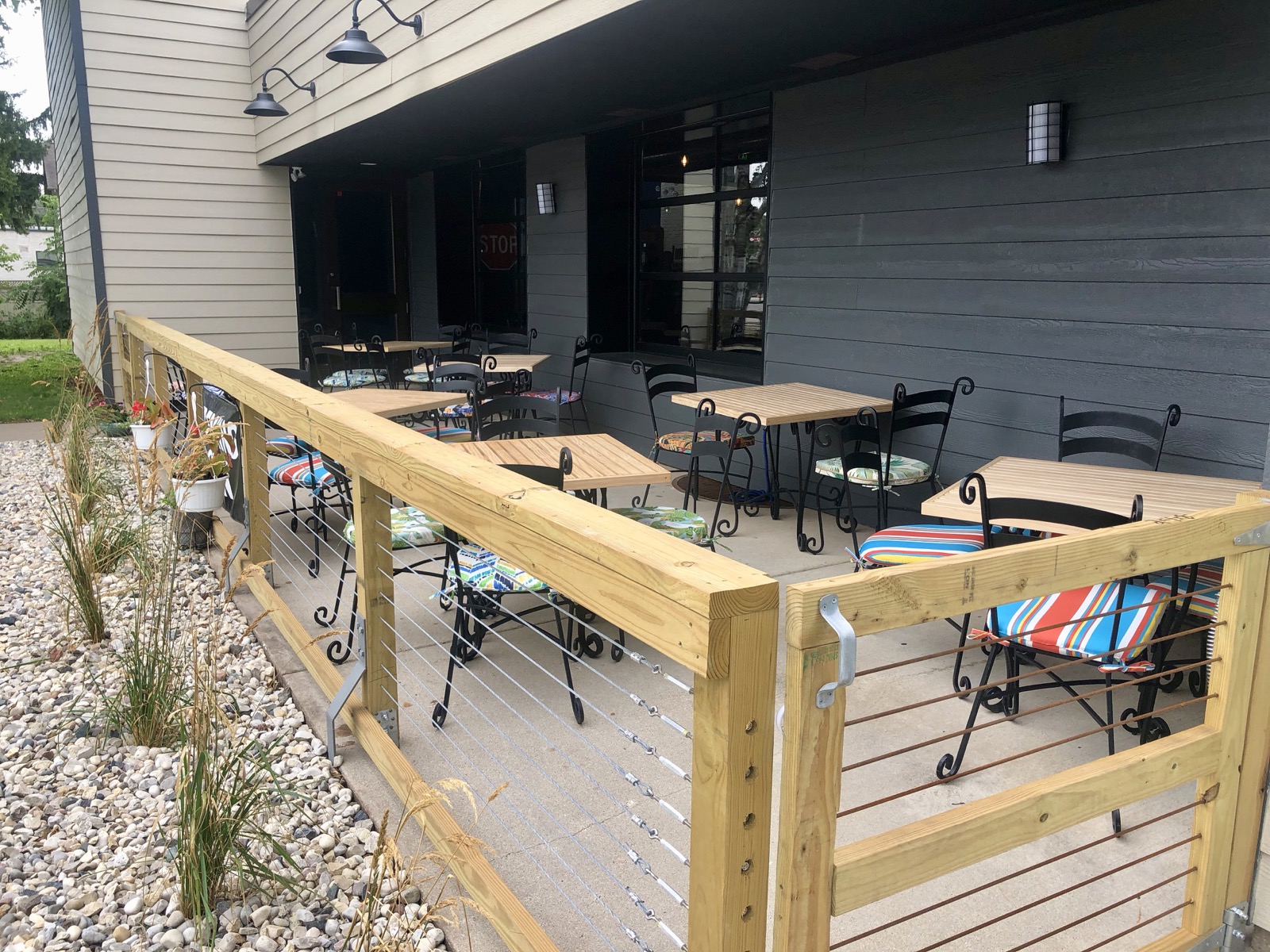 Spin 180 degrees and you’ll face the restaurant’s open kitchen which showcases a stone oven for baking pizzas, biscuits, breads and other dishes, along with an adjacent counter where guests can get a bird’s eye view of the kitchen activity. 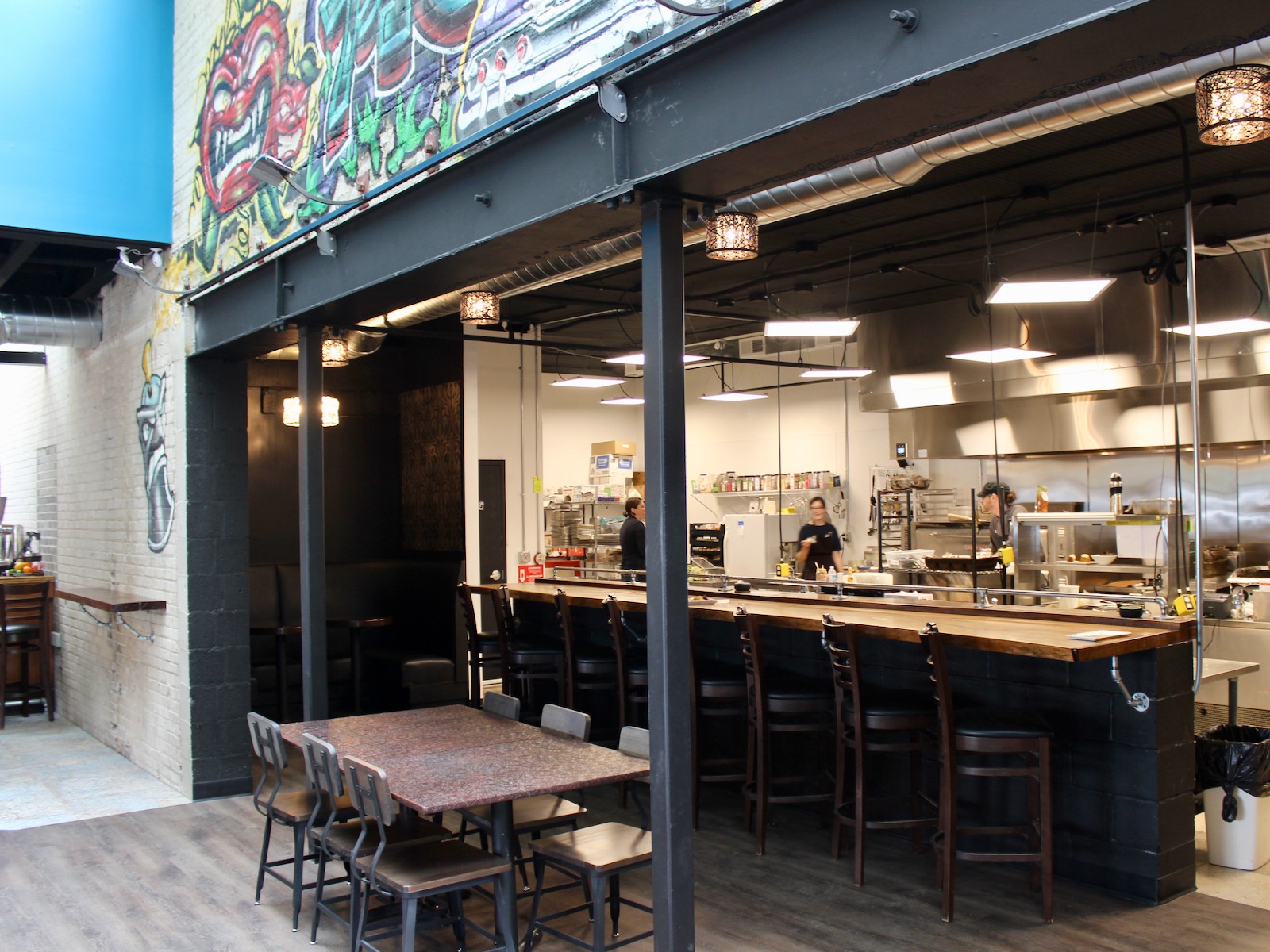 "Twenty some years ago, chefs were unseen … in the kitchen confined by four walls," says Janisse-Kanzenbach. "But now people really want to get to know the chef and see where their food is coming from. We’ve developed such personal relationships with our guests, and this is a way to keep that going. 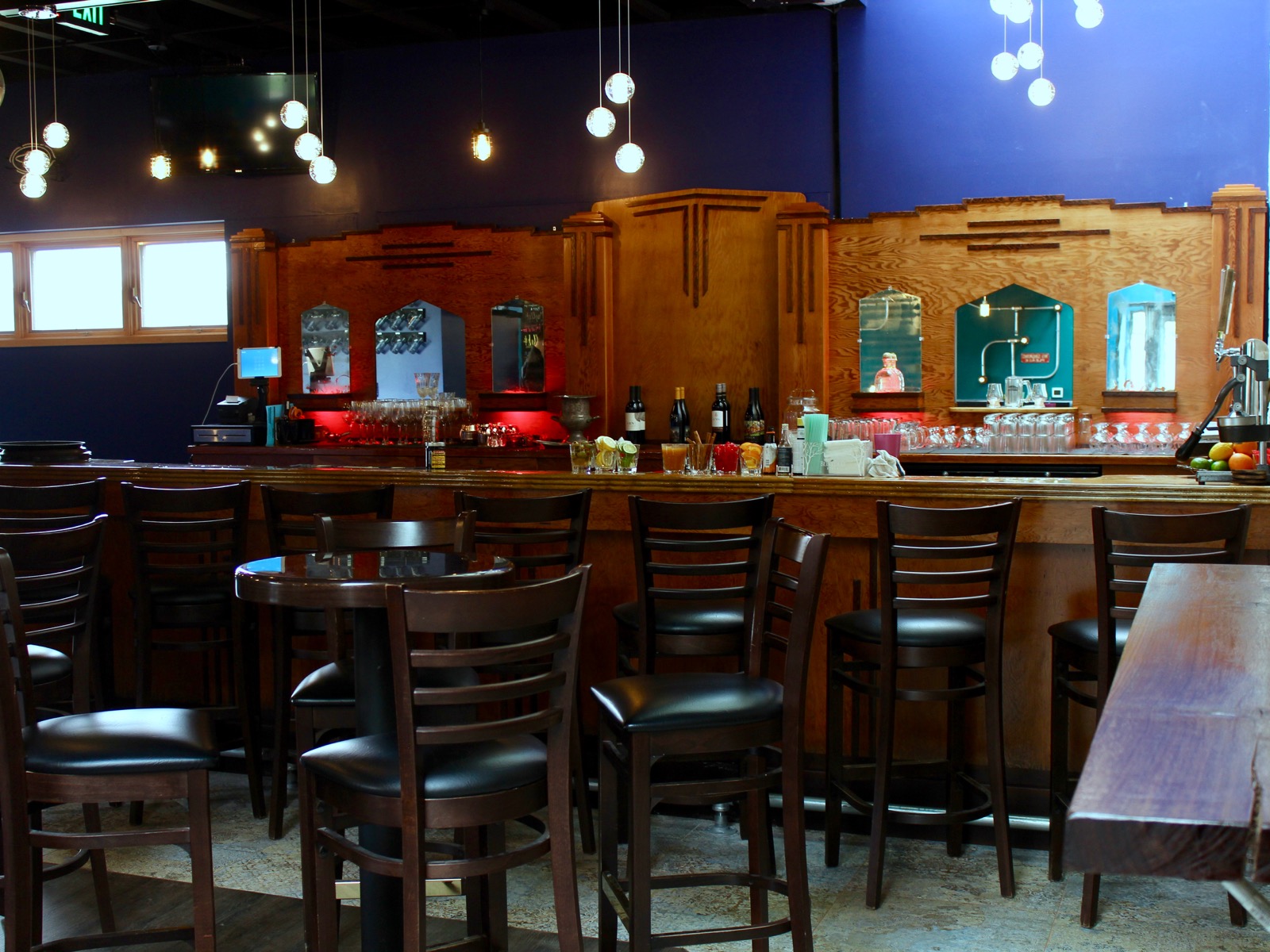 Guests will also find a repurposed Art Deco bar salvaged from a tavern in Porterfield, Wisconsin which Janisse-Kanzenbach and her husband Cory purchased and refurbished. It’s accompanied by both bar seating and high top tables built for mingling with snacks and drinks.

The bar might be from an era gone by, but the beverage program at Precinct is modern as they come. Folks will find wine, craft cocktails (featuring housemade syrups, tinctures and the like) and 12 taps stocked with craft selections from breweries including 1840 Brewing, Explorium Brewpub, Nightmare Brewing, Untitled Art, Desthil and Ahnapee. 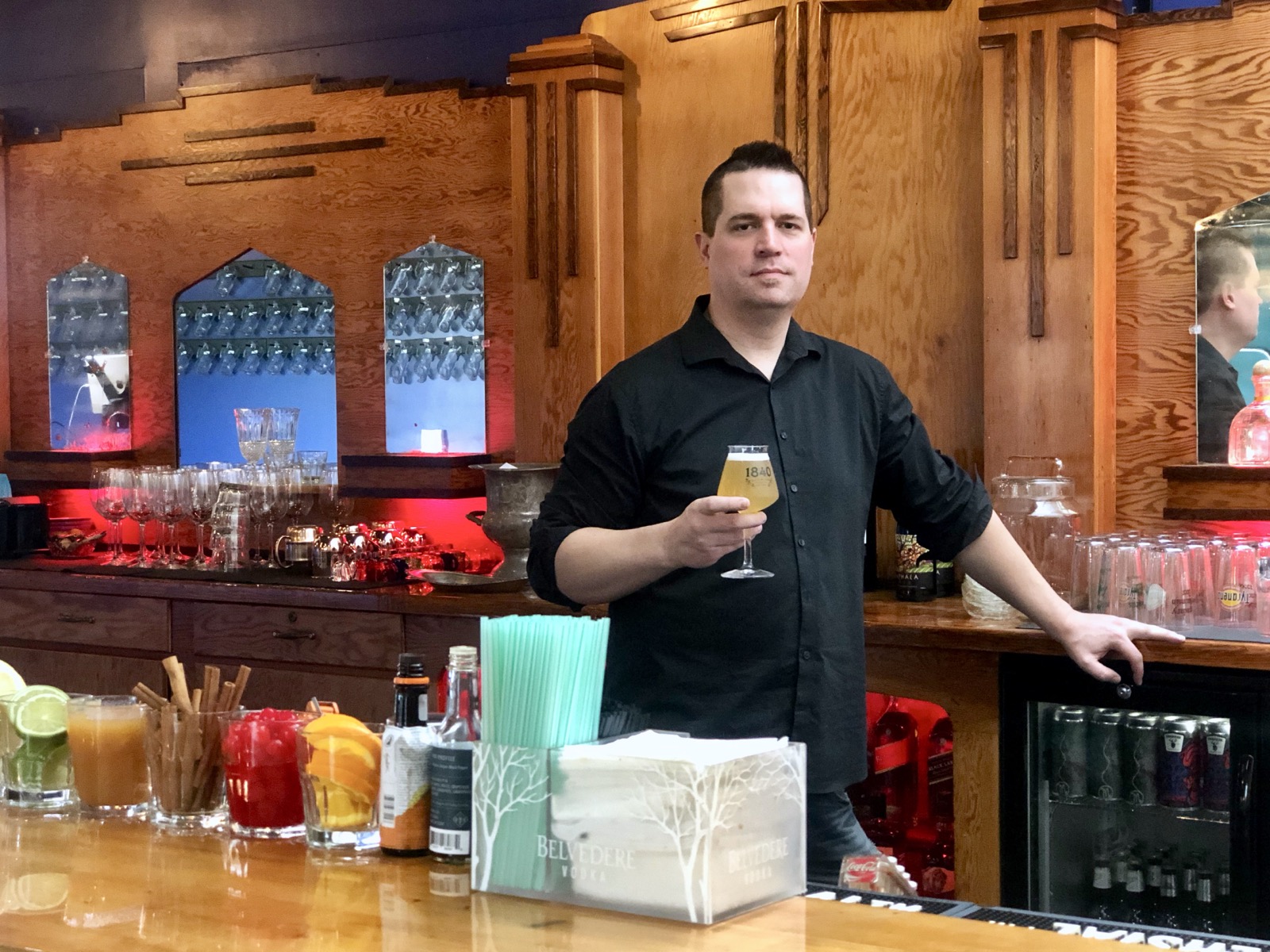 "When we took over Barley Pop, we transitioned over to more rotating craft beer there; and we’re taking it to a higher level here," says beverage director Mike Willavage. "We’re really focusing on small self-distributed or rare, niche craft brews. Our selection will change regularly; it will never be stagnant."

"Overall, we’re trying to bring some things here that you find in larger markets and give people an experience that you can’t really find around here. The same goes for the bar program. We’ve got a fairly nice collection of bourbons, and we'll  be bringing in some finer rums as well to complement our focus on craft cocktails."

The menu at Precinct features a number of Cafe Soeurette favorites, including the cheddar apple salad ($9) and the wildly popular Alsatian bacon and onion tart, inspired by a recipe Janisse-Kanzenbach's father brought back for her from Europe ($14).

There’s also the Wisco Burger ($15), which is pretty much a dead ringer for the delicious Overstuffed Wisconsinite burger which graced the former restaurant’s menu. 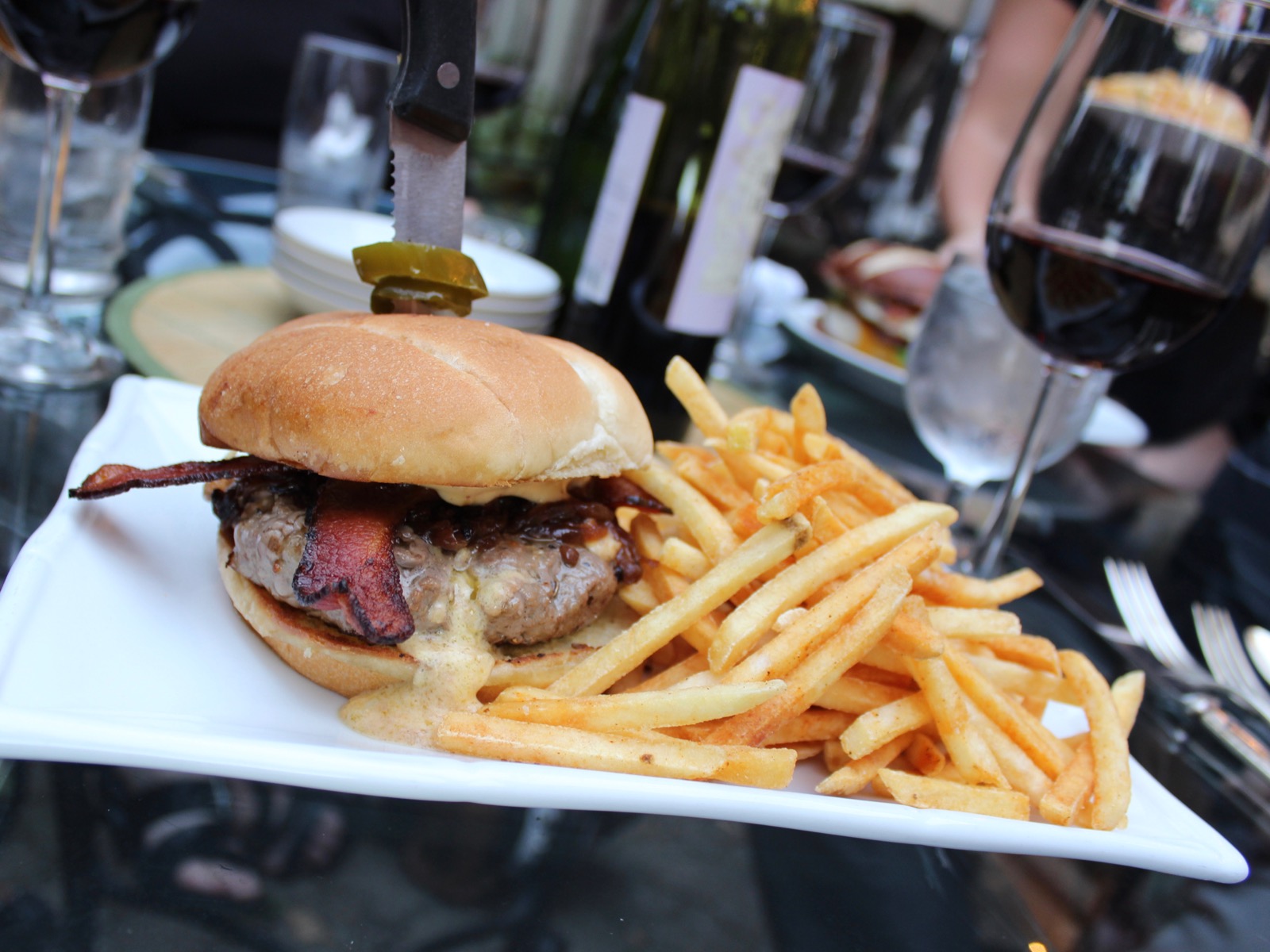 There are also pizzas… or, rather, "Ka-zzas," an expression Janisse-Kanzenbach’s husband coined to describe his masterful Italian-seasoning-enhanced frozen pizza creations.

The personal-sized pizzas are baked in a stone oven and topped with ingredients like grilled oyster mushrooms, spinach and Carr Valley Menage cheese; charred pineapple, scallions, ham and goat cheese; and beer brats, duck fat cabbage and fontina cream ($14 each).

There are also savory pudgie pies, an idea generated by Pett as the team brainstormed fresh new ideas for the Precinct menu.

"Jodi has an airstream from the 50s and I have an old VW Bus from the 80s, and we both love to get away and go camping when we can," says Pett. "The idea for the pudgie pies hit me when I was walking through my garage and I saw the pudgie pie irons hanging on the wall … the idea took off from there."

You’ll find the pies -- which are cooked in pudgie pie irons on the restaurant’s grill in flavors like smoked ham and gruyere (with kale, onions and pickles), bacon and brie (with raspberry jam, spinach and almond truffle butter) and PB&J for the kids ($9).

The menu will change with the seasons, driven by what’s fresh from local farms. And Janisse-Kanzenbach says it will evolve as the restaurant moves forward.

"This was really an opportunity for a new start and fresh ideas," adds Pett. "We’re still maintaining our focus on using products from local farms and supporting the community. But, there’s lots of room for really creative new ideas."

Beginning Wednesday, July 31, Precinct Tap + Table will be open Monday, Wednesday and Thursday from 4 to 9 pm., Friday and Saturday from 11 a.m. to 9 p.m. (the bar will remain open later).