Que-sion is at the heart of redbar's new menu, thanks to The Saucy Swine

There's a brand new menu at redbar in St. Francis, and it's comprised of newfangled comfort food finds, smoked meats and at least one gut-busting sandwich. That's thanks to a new partnership with the folks from The Saucy Swine.

That’s thanks to a new partnership with The Saucy Swine, a barbecue concept started by Chef Matt Nuetzel and partner Brandon Brauer.

Nuetzel, who spent the past 14 years as the chef for Meyer’s Restaurant in Greenfield, began smoking meats in his spare time more than a decade ago. By and by, Nuetzel's hobby became an obsession that prompted him to consider branching out on his own.

"I love the challenge of coaxing the flavor and tenderness out of meats," he says of the process. "Starting last year, Brandon and I were both looking for a change, so we started hunting for a location to start a restaurant. But, as we ran into more and more dead ends, I gave Carrie [Wisniewski] a call and proposed we execute our menu at redbar."

Wisniewski, who made changes to the bar’s menu after the departure of Chef Sean Henninger last spring, says his call came at a great time. Jocelyn Drake, who had been running the redbar kitchen, had taken on more responsibilities with catering, and she had expressed a desire to take on that work on a full-time basis, which would have left Wisniewski to find someone else to run the kitchen had it not been for Nuetzel’s proposal.

"What I think excited me the most is that, even though BBQ will not be everybody's cup of tea, it is unique and it makes redbar a destination for this kind of food," she says. "Also Matt's passion and enthusiasm was infectious. It only took one sit down with the staff – tasting his food and asking questions – to get them just as passionate about the new direction of redbar as Matt was to come on board." 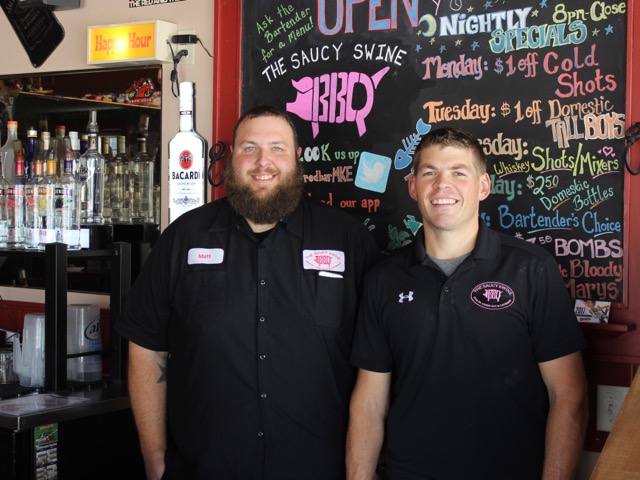 Nuetzels menu – which begins with dry-rubbed meats that are smoked on a mix of hickory, oak and applewood – is comprised of appetizers, salads and sandwiches that integrate international ingredients and unusual flavor combinations to create unique comfort food creations.

"We call it ‘que-sion’," he says. "There are a lot of places that do barbecue. And there are a lot of restaurants that serve fusion dishes. But, virtually no one is combining the two. That’s what we do. redbar is a really unique place, so we wanted to create a bar menu that was a perfect match, and that had as much character as the bar itself."

And that concept plays out in six Saucy Swine barbecue sauces which include flavors like
Milwaukee Sweet (a classic sweet barbecue sauce made with Sprecher root beer); Jerk Pineapple (a sauce with a mid-range kick featuring pineapple, a jerk spice blend and habanero peppers); Mango Habanero (a fruity, tropical flavored sauce with a persistent slow-burn); Bourbon (an onion-forward sauce reminiscent of a bourbon glaze); Korean Kick (a slightly sweet sauce with flavors of hoisin, plum sauce, ginger and chili paste); and Smoke n’ Fire (a smoky spicy sauce featuring house-smoked salt and a blend of chilis including habanero, chipotle, jalapeno, chili paste and cayenne). 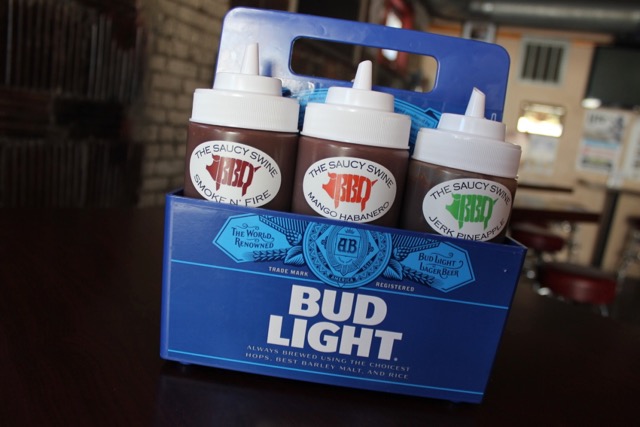 Among the appetizers, Nuetzel says the Pork Belly Bites, cubes of smoked pork belly that have been deep fried and tossed with rib rub ($9), are among the favorites of redbar customers. "Some people call them ‘bacon crack’," he says. 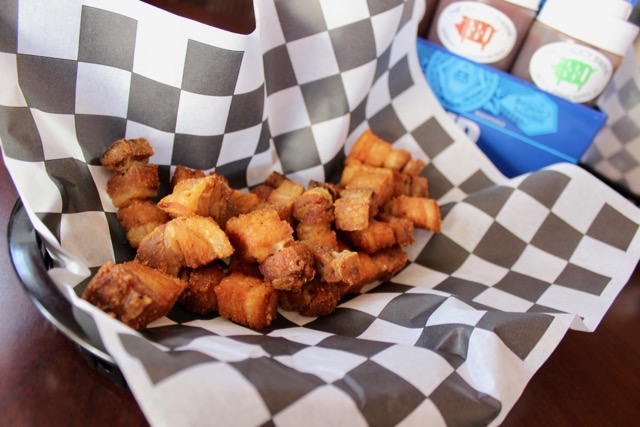 Nuetzels Wangs are also popular. These whole chicken wings have been beer-brined, smoked and then fried before being tossed in rib dust. They’re served with a creamy bacon Dijon ranch sauce ($8). 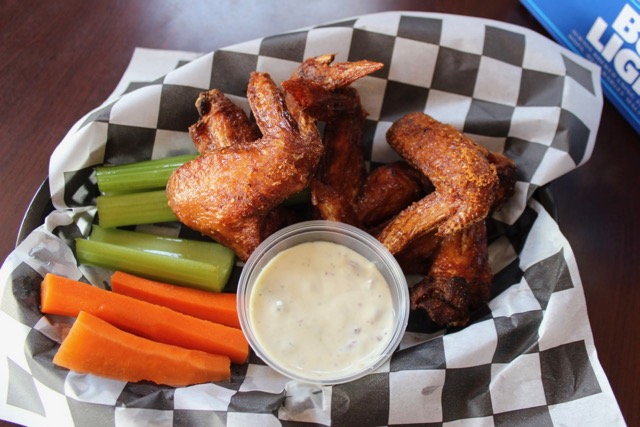 And then there are the crispy, smoky, cheesy Bacon Cheese Bombs, a blend of seven cheeses tossed with bacon and garlic and deep fried. They’re also served with a side of bacon Dijon ranch sauce ($7). 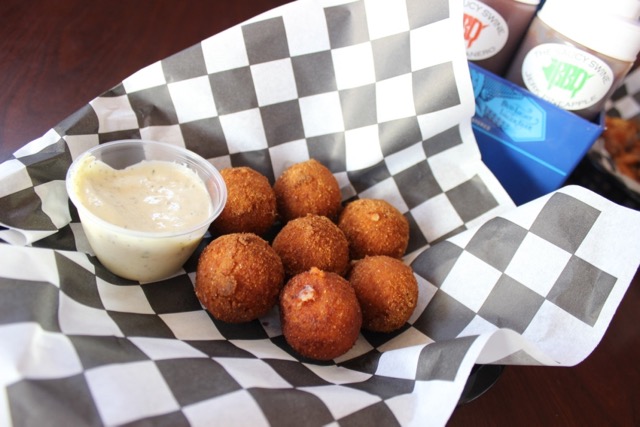 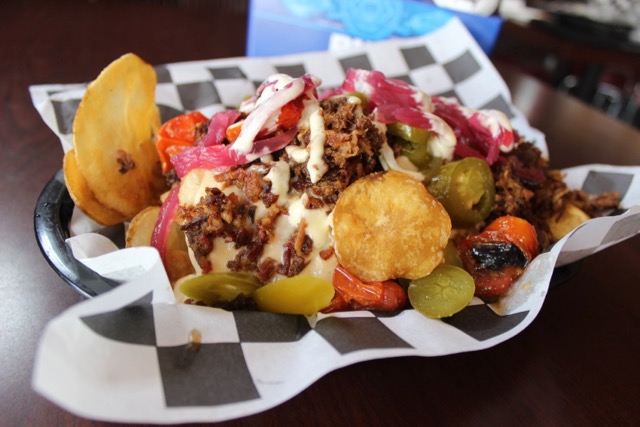 The Milwaukee Melt, is a variation on that theme with smoked brisket, herbed goat cheese spread, oven roasted tomatoes and creole slaw ($9). 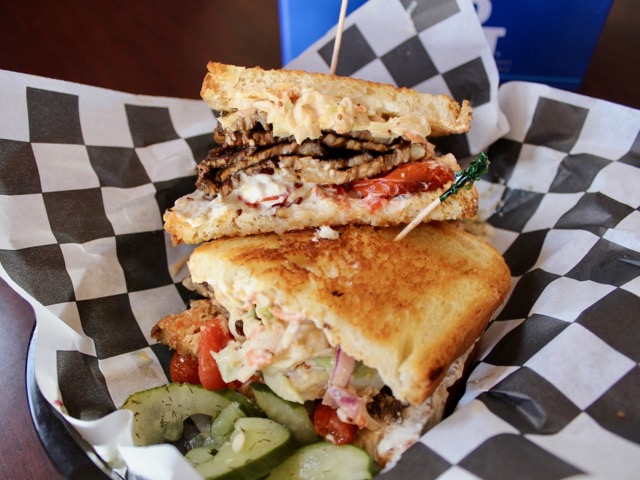 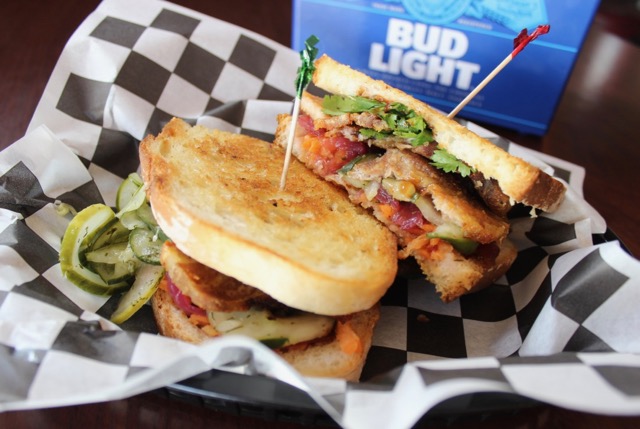 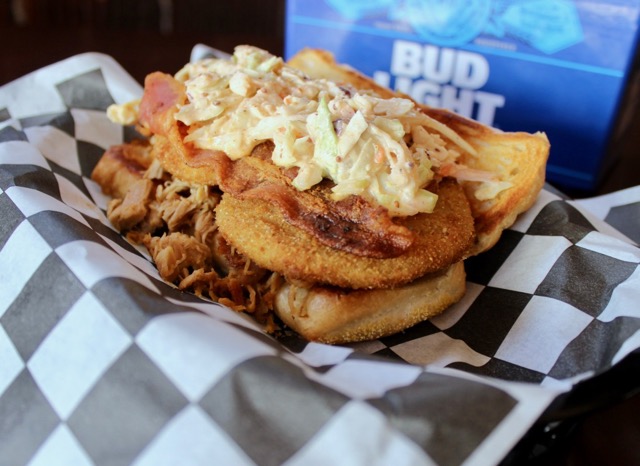 And the gut-busting One Pound BBQ Superstack (pictured in the head photo) starts with a grilled bun that’s piled high with smoked pork belly, brisket, pulled pork and bacon along with creole slaw, Wisco five-cheese sauce and crunchy onions ($12).

All sandwiches are served with housemade chips, which come in three flavors: plain, buttermilk ranch and barbecue. Nuetzel says he prefers them to fries because they stay crisp throughout the meal, rather than cooling down and getting soggy as French fries sometimes do.

And, as meat-heavy as the menu is, Nuetzel says they’ve also created dishes for folks who prefer to avoid animal products. All sandwiches can be made vegetarian thanks to a custom mushroom blend (including portobello, shiitake, cremini and oyster mushrooms) which can be subbed out for the meat on any sandwich. Or folks can simply order up the Mondo Mushroom Melt, featuring the mushroom blend, herbed goat cheese spread, fresh spinach, pickled red onions and oven roasted tomatoes on grilled French bread ($9).

"I know so many people who are married to someone who doesn’t eat meat," he says. "And usually that means they can’t really eat at barbecue places. So, we really wanted to accommodate those folks with an option they’d enjoy."

And creating crowd-pleasing dishes that are both unique and affordable is at the heart of what Nuetzel does.

"I love introducing people to new flavors, and the menu reflects that," he says. "I also don’t believe in over-charging people. So, the entire menu is affordable enough that people can visit multiple times a week."

Starting in September, Nuetzel says they will begin rolling out nightly specials, including a wing night, Tuesday taco specials and a happy hour featuring special $7 pricing on the OG sandwich.