Farm-to-table dining has become best practice among restaurants located in Metro Milwaukee over the past decade, and it's the inspiration behind a new West Allis restaurant called The Farmer's Wife, which could open to the public as soon as Oct. 1.

While farm-to-table dining has become best practice among restaurants located in Metro Milwaukee over the past decade, the concept has been notably slower to catch on in areas like West Allis.

But it’s the inspiration behind a new new restaurant called The Farmer’s Wife, which will make its debut at Sept. 15's Forks & Corks event and could open to the public as soon as Oct. 1 at 6531 W. Mitchell St. in the former home of PM Pub & Grub.

Owner and operator Robin Mastera originally planned to launch a food truck with the same name. In fact, she approached Mark Lutz, owner of the West Allis Cheese and Sausage Shoppe and Cafe, wondering if she might be able to use their kitchen as her commissary.

Lutz declined, instead offering her the opportunity to take on the role of restaurant operator in a new building he’d recently acquired near the West Allis Farmers Market and forthcoming Six Points Development, a project of the Mandel Group that is expected to include a brewpub, specialty grocery, restaurants and retail space, along with residential townhomes.

Mastera, who spent the past five years teaching cooking classes with Goodwill Industries, was also the former owner of two popular West Allis taverns: The Founder’s Corner and Robin’s Nest. And she says the more thought she gave the idea, the more it made sense. Soon, she says, the concept began taking shape as a full-fledged restaurant.

"The goal was always to serve classic comfort foods made with local organic ingredients," she says. "And the philosophy behind it all is part of the way I was raised. Why turn food into a science experiment, adding chemicals and treating everything with antibiotics? The harm is obvious. And so eating clean is really important to me. And sharing that with others is as well."

Mastera says her goal is for restaurant offerings to be comprised of 90 percent local ingredients, with a focus on organic produce and sustainably raised meats and seafood from purveyors including Kettle Range Meats, Braise RSA and LOTFOTL.

"My mother was raised on a farm in Minnesota. So the idea of fresh and local has always been a part of who I am," says Mastera, who notes that she officially became a "farmer’s wife" when she married her husband, who grew up on a fifth-generation dairy farm in Massachusetts. 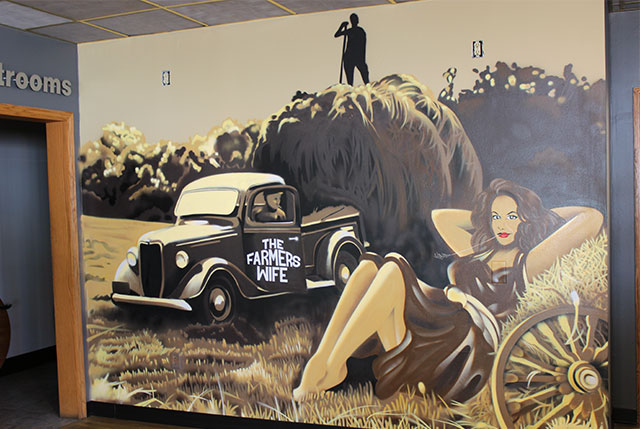 A mural on the southern wall of the restaurant depicts a scene inspired by a photograph showcasing five generations of farmers in Mastera's husband's family.

"What happens when a kid raised on a dairy farm on the East Coast marries a Midwest girl whose family comes from Minnesota farm land with a passion for the Gulf Coast?"

That's the question posed on The Farmer's Wife menu. And it's an accurate depiction of what you'll find.

With foundations built on comfort food fare and family recipes, folks will find familiarity in dishes like soup, salad, poutine, pot roast, meatloaf and grass-fed burgers. However, they will also find specialties inspired by a lifetime of travel and beloved memories.

"A lobster roll is the first thing I ever ate on the East Coast," says Mastera. "My husband was a sailor, and when we went back to visit his family, he took me around to some of his favorite places. During that trip, we shared a lobster roll and a stuffed quahog and Portuguese kale soup."

Meanwhile, dishes like the chicken pot pie are based on recipes Mastera’s mother made for her while she was growing up. And Southern favorites derive their beginnings from her and her husband’s travels around the U.S.

"We both have a passion for traveling in the Gulf Coast," she says. "And the gumbo on the menu is my own secret recipe from those travels. It’s not Louisiana or New Orleans style, but it’s delicious."

Daily specials will include Tuesday tomahawk steaks, fried chicken dinners on Wednesdays, lollipop lamb chops on Thursdays and a fish fry featuring beer battered and grilled cod or shrimp (along with fish tacos) on Fridays and an oyster bar from 4 to 7 p.m. on Saturday evenings.

On the sweeter side, Mastera says there will be desserts like bread pudding, chocolate cayenne pepper cake with brown butter bourbon frosting and Southern style banana pudding.

And while affordable, comforting fare might be what draws people to The Farmer’s Wife initially, it’s likely the hospitality – along with offerings like free Wi-Fi for working lunches – which will keep them coming back.

"It’s in my blood," Mastera says. "To this day, my house on Sundays for dinner is open to everyone. In fact, there are always bodies there who aren’t biological. And I love that."

"I cannot wait for the true crazy to begin," she says. "Banging the pans around, greeting and feeding people is what it’s all about."