You might just want to mark your calendars for Saturday, March 10. After all, it's release day for Mystic Knot, a brand new barrel-aged Irish Coffee Stout from Third Space Brewing. And it's a brew that is likely to appeal to both beer and coffee lovers alike.

You might just want to mark your calendars for Saturday, March 10. After all, it’s release day for Mystic Knot, a brand new barrel-aged Irish Coffee Stout from Third Space Brewing. And it’s a brew that is likely to appeal to both beer and coffee lovers alike.

The brewery’s tap room will open at 11 a.m. for the release during which Mystic Knot will be available in 750 ml bottles for $20 each (limit of six bottles per person). Accompanying Mystic Knot Irish Coffee mugs will also be available for purchase for $8 each. Once purchased, glasses can be filled with Mystic Knot all day for just $6 per pour.

Brewed with lactose to enhance its creaminess, the stout is then aged in both whiskey and bourbon barrels for a total of seven months before being finished with a 48-hour steep of Stone Creek 3 Volcanoes Coffee, a single origin dark roast Guatamalen coffee with notes of spice, toast and chocolate.

The resulting beer showcases a flavor profile that’s strikingly similar to Irish coffee, with rich whiskey notes, a strong backbone of chocolate and coffee and a beautiful, creamy mouthfeel. 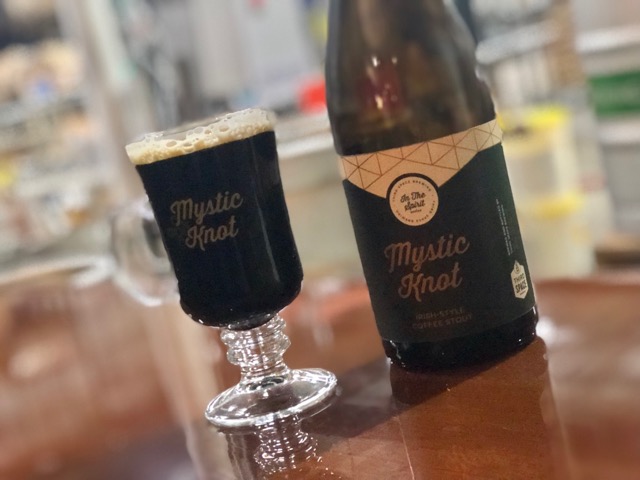 "Our collaboration with Stone Creek is really a part of the story we want to tell in conjunction with this beer," notes brewmaster Kevin Wright. "It’s the story of two local companies really working together and bringing their particular expertises to the table."

As a bonus, Third Space will also be releasing a very limited quantity of a Mystic Knot variant called Mystic Cortado.

Mystic Cortado begins with with Mystic Knot stout, which is barrel-aged for seven months and finished in the barrel with Stone Creek’s Green Bike Espresso, a blend of medium-roasted Columbian, Costa Rican and Brazilian coffees that exhibit deep chocolate notes with a hint of brightness. Mystic Cortado is then blended with 15% Third Space Java Blanca Coffee Cream Ale, an ale finished on Stone Creek’s Ring of Fire and Bone Shaker coffees.

Mystic Cortado will also be available in 750 ml bottles for $20 each. Bottles are limited to one per customer.

During the release on March 10, Stone Creek Coffee will be present at the brewery, providing coffee and breakfast items for early arrivals as well as tapping 3 Volcanoes and Green Bike cold brew, which can be sampled at the bar alongside Mystic Knot and Mystic Cortado as part of special coffee and beer flight (while supplies last).

The Taqueria La Guacamaya food truck will also be present throughout the day serving breakfast tacos in the morning and their regular menu throughout the remainder of the day.

Mystic Knot is the fourth beer in Third Space Brewing’s Spirit Barrel-Aged Series, which has featured Haunted Barrel, Barrel-Aged Liquid Layers and Nexus of the Universe.

Customers who are unable to make it to the March 10th release can also taste Mystic Knot on Saturday, March 17 beginning at 9 a.m. St. Patrick’s day spiffs will also include a giveaway. The first 125 customers who purchase a pint on March 17 will receive a complimentary Third Space St. Patrick’s Day pint glass.