I wondered though, after twenty years of marriage, three kids and multiple tours together, would Tim McGraw and Faith Hill be ... stale? Tired? Old? I shouldn't have even wondered; their "Soul2Soul" stop Friday night in Milwaukee was none of that.

Walking into Tim McGraw and Faith Hill's "Soul2Soul" tour stop at the BMO Harris Bradley Center on Friday night, all I really wanted to do was stare – and drool.

The thing is, though, yeah, the two are both incredibly gorgeous, but so what? I had to ask myself what’s the incentive, besides the drool factor, to head to a concert of a couple of old school country stars?

Welp, first, it was my assignment. But, also, in addition to being sexy, gorgeous and beautiful people, they’re also crazy talented, possess unbelievable sets of pipes and their songs pull your heartstrings.

I know, right? Could life be anymore unfair?

Yeah. Yeah, it could. Because McGraw and Hill are also married and totally in love – like first date, still head-over-heels after 20 years of marriage and three amazing daughters love. Oh, and they recently made their permanent residence a twenty-acre private island compound in the Bahamas.

That just leaves a puss-filled gaping wound in everyone else’s self-esteem, right?

I wondered though, after twenty years of marriage, three kids and multiple tours together, would they be ... stale? Tired? Old?

I shouldn’t have even wondered; they weren’t stale, or tired, or old. And their opener, High Valley, was nothing to sneeze at either.

High Valley finds its roots in bluegrass and gospel, which grounds their music but still lets it soar with a modern twisted edge. And they were straight up magnificent. Best known for their recent hit "Make You Mine," the duo – made up of the Rempel brothers, Brad and Curtis – played that plus five other songs including "I Be U Be," "Be My Baby Tonight" and "I’ll Fly Away." They also dedicated a song to the man without whom their career wouldn’t be possible: their dad, a fitting Fathers Day weekend tribute. It’s too bad that the Bradley Center hadn’t filled up when they hit the stage, because High Valley was freaking fantastic.

The duo will return, headlining the U.S. Cellular Connection Stage on July 4 at Summerfest. Catch their show. It’ll be totally worth your while.

McGraw and Hill took over from there. For two solid hours, they smacked new life into their hits, threw in a few new songs and pretty much had the audience doing what I’d planned to do from the outset: drool.

Wow, @FaithHill and @TheTimMcGraw were so good tonight! So much talent from the both of you🔥🔥🔥 — Cassaundra Lindsay (@Cassaundra_D) June 17, 2017

I do have a caveat, though. It was either the acoustics in the upper deck generally or something with the sound board, but unfortunately, a lot of the first part of their concert sounded … funky, over-assaulted with bass. To make it worse, most of Faith Hill’s solo songs sounded off. The bass was kicked up so high that the woman with one of the best instruments in the business was drowning in drums. And that was sad. 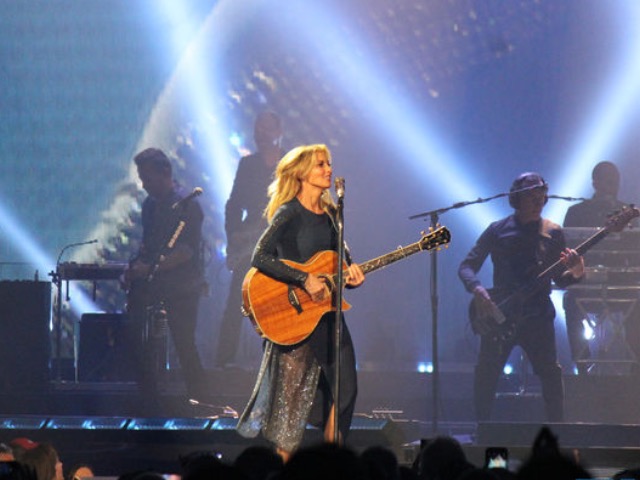 I hoped maybe it was just me … but it wasn’t.

The audience seemed perplexed during her solo set. While you could totally tell that Faith was on and singing as she does, you couldn’t quite get grabbed and pulled in the way you wanted to.

McGraw and Hill threw in three of their new songs including "Telluride," a rocked out, soul-out song about tangling up with a pretty girl in the mountain town. It was just damn good.

Other highlights included McGraw’s photo montage during "Humble and Kind," featuring faces of all kinds of folks – black, white, brown, old, young, laughing, crying. People – just people – like any of us, like all of us. The moment pretty much brought the house down and earned him a standing ovation. 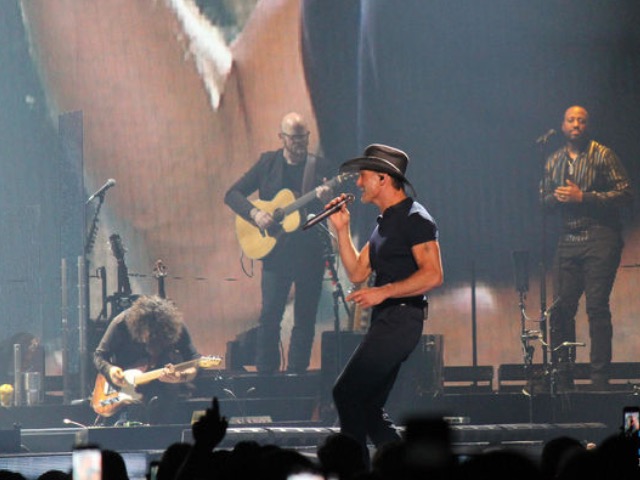 On a less serious note, I’d mention the kneeling pelvic thrusts from McGraw at the beginning of "Real Good Man," but unless you were directly on either side of him, you wouldn’t have caught it. And I don’t want to make everyone jealous.

The encore was a show stopper – literally and figuratively. Hill has said that when they’re performing "It’s Your Love," it sometimes feels like no one is watching. But tonight, during the encore ("I Need You"), it certainly felt like, ahem, we were watching a very, *very* private moment.

The couple was intimately suspended in the air with their tour's emblem of the blade and the chalice encircling them. They were both seated in chairs facing each other, and from my angle, it looked like Hill was straddling McGraw. It got uncomfortably hot, especially when McGraw’s hand started to wander, getting handsy with her cut-down-to-there dress. It wasn’t obscene, but it was just enough to burn it into your brain that these two hot people are going home together.

So, um, *coughs*, after that, it’s pretty evident why the emblem of the "Soul2Soul" tour is an intersecting chalice and blade, the ancient symbol for female and male. Hill and McGraw are definitely bonded soul to soul – plus, they’re one of the best intersections of male and female artists that country music has to offer. 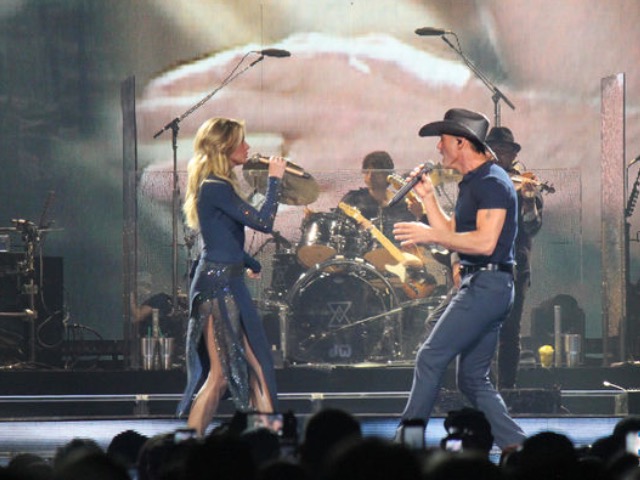 Somehow tonight was more than just a reboot of their tried and true favorites. True, most of the songs were hits a decade or more ago – but then how many times do you hear "Wagon Wheel" on the radio in a day? And regardless of old or new, McGraw and Hill were fresh, energized and still obviously very much in love.

Who are these people? Really. Who?

They’ll probably tell you they’re just a Mississippi girl and a Louisiana boy. But for more than 20 years, they’ve been two of the top-selling country artists of all time. Faith has sold more than 20 million albums since her debut in 1993. Tim has held his own selling over 40 million albums since his quiet and much slower start also in 1993. On their way to amassing millions of piles of albums sold, they’ve also collected a lot of hardware, including Grammys, American Music Awards, ACMs and the like.

Bottom line: Besides staring, what I really wanted Friday night – what I always want from any country artist – was to have my boots blown off.

"I Need You" – Tim McGraw with Faith Hill