It was Timeflies's fifth Summerfest performance, and their concert was a great way to close out the last day of the festival this year, performed a whopping 25 songs with not one I didn't enjoy.

Some of the first words out of Timeflies band member Caleb Shapiro’s mouth on stage Sunday at Summerfest were: "Wisconsin, we missed you!" That seemed to be a theme throughout the concert, as he kept bringing it up. I can't speak for all of Wisconsin, but I missed you too, Timeflies.

The crowd started the night waiting for the concert to start, as Timeflies appeared on stage 10 minutes late, but by the end of the evening, the crowd was waiting for them to come back.

Sunday night was the group's fifth Summerfest performance, and their show was a great way to close out the last day of the festival this year, performing a whopping 25 songs with not one that I didn’t enjoy or dance to.

Shapiro (vocals) and his musical partner Rob Resnick (drums, guitar, electronic music, other sounds) formed their group in 2010 and grew their fanbase from YouTube covers and original music. They even started a weekly tradition, "Timeflies Tuesdays," where they would post a video featuring their new music every, yes, Tuesday.

The LED screens behind the duo changed throughout the concert, matching the moods and styles of their hip-hop, pop, electro, R&B and rap music mixture. At the beginning of the concert, starting with "All the Way," the show had hypnotic black and white images that looked like they came straight out of a Dr. Seuss book. Bright lights turned on during the lyrics, "He-he-hey," making the song come alive. 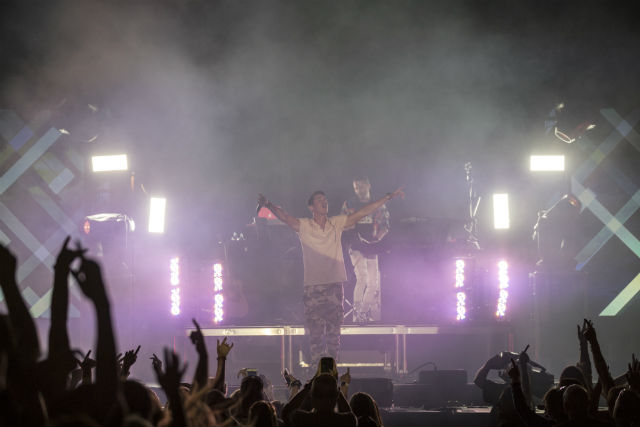 During "Nobody Has to Know" – a personal favorite – geometric shapes, such as triangles and cross-hatching, appeared on screen, which gave an edgy feel to the song. Pixelated hearts that looked like they were plucked out of an old video game, lighthouses and the Timeflies logo were among the many other images that came across the screens.

Shapiro was good at getting the crowd involved, as he set the right side of the audience against the left in a brief battle of who could cheer louder. He wasn’t afraid to drop multiple f-bombs, sh*ts and other swears, and his bold talk matched his energy 100 percent. I suppose that, as a vocalist who sings melody and then goes into fierce rapping a few seconds later, he needs a personality like that.

But the two also knew when to tone it down. People started singing the familiar lyrics to fans, "I see your monsters. I see your pain. Tell me your problems, I'll chase them away" during "Monsters," and that started to lighten the mood. The middle portion of the concert was devoted to acoustic covers and a mashup. "Turn it Up," "I Want It That Way," "Wagon Wheel" and "The Shape of You / No Diggity" were all given the acoustic treatment, thanks to Resnick’s fingers strumming away. Audience members who didn’t know Timeflies as well got a chance to sing along and recollect themselves and maybe clap along to a few songs. Shapiro’s question to the audience in between songs – "Should we keep this thing rolling?" – stirred up even more excitement.

I thought it was a nice touch that they opened up water bottles and sprayed water onto the crowd during the remixed Disney favorite "Under the Sea." Shapiro again got good crowd involvement points when he asked people near the stage to give him random words. "LeBron James" and "string cheese" were some words, for instance – and amazingly, Shapiro was able to bring them all into a rhyming freestyle rap.

After, the screens behind the two on stage had Wisconsin words, such as "Summerfest," "Bucks," "Harley-Davidson" and "Miller Lite" – and Shapiro made a rap of all those too. It was not only amazing to hear but also amazing to see Shapiro quickly come up with rhymes that made logical, grammatical and musical sense to match the beat. Mash that up with "All I Do is Win" and you get a bunch of thrilled, lively audience members.

I saw a young man in front of me doing a dance that looked like a robot on steroids during "Time Machine." I originally gave him weird looks from behind, but honestly, the dance couldn’t have been more fitting to the lyrics about living it up and wanting to be 18 again. The hippie vibes from the rainbow lighting and rainbow, swirly designs on the screens behind the group members kept the young and free theme going during "Once in a While."

All of these songs were more than satisfying to witness live, and after so many of them, I wouldn’t have been surprised if when the group left the stage, they didn’t come back.

However, they did. For their encore, Timeflies chose images of Batman, Spiderman and the Incredible Hulk to join them on stage via LED screen. The characters danced around with the two men on stage, and although it was a little weird at first, the images really contributed to the wistfulness of the song and wanting to be back in the good old days of childhood.

Shapiro mentioned it was their favorite show in "a long-ass time" and even said a few times throughout the concert, "Milwaukee, we love you!" Again, I cannot speak for all of Milwaukee, but Timeflies, I love you too.

"All the Way"
"For You"
"Nobody Has to Know"
"Fire"
"Worse Things Than Love"
"Glad You Came" (The Wanted cover)
"Lay Me Down"
"SMFWU"
"Monsters"
"Little Bit"
"Turn it Up"
"I Want It That Way" (Backstreet Boys cover)
"Wagon Wheel" (Nathan Carter cover)
"The Shape of You"/"No Diggity" (Ed Sheehan/Dr. Dre/Blackstreet mashup)
"Under the Sea" (Disney cover)
"Ride"
Wisconsin freestyle rap /"All I Do is Win" (Timeflies/DJ Khaled mashup)
"Swoon"
"Gravity"
"Raincoat"
"Time Machine"
"Once in a While"