Rad local T-shirt company Too Much Metal For One Hand is paying tribute to Milwaukee's colorful sporting past with some new threads, which were announced Tuesday. Too Much Metal has created four retro-themed shirts for the Wisconsin Center District that honor the Milwaukee Arena, aka the MECCA.

Rad local T-shirt company Too Much Metal For One Hand is paying tribute to Milwaukee’s colorful sporting past with some new threads, which were announced Tuesday. Too Much Metal has created four retro-themed shirts for the Wisconsin Center District that honor the Milwaukee Arena, once known as the MECCA and now called the UW Milwaukee Panther Arena.

"The MECCA Arena in Milwaukee is where I graduated high school, college and went to my first concert," said Too Much Metal designer Fred Gillich. "I even got to see the Bucks play on a replica Robert Indiana floor last year. This building has a lot of meaningful history to me. It's a part of my city identity."

The MECCA throwback T-shirts will debut and be available for purchase on Wednesday, June 13, at the Newaukee Night Market. While you’re there, stop by the OnMilwaukee stand and say hello!

According to Too Much Metal, the Wisconsin Center District "wanted something special that was rooted in the heritage and history of the UW Milwaukee Arena but with an updated, reimaged graphic design language."

Gillich said the challenge was to respect the past, while finding "some visual solutions" to make the shirts classic-looking, distinctive and cool.

"We looked at the iconic features of this very practical-looking building – the roof arches, the fonts carved into the marble and the bricks, real working-class stuff," he said. "We processed the colors from the MECCA basketball floor as a tribute to the late Robert Indiana.

"We just wanted to honor us Milwaukeeans."

And, with the World Cup starting this week, check out Too Much Metal’s array of heritage and culture-repping 414-themed shirts – released on April 14 for Milwaukee Day – to see if there’s one for the country you cheer for (the U.S. didn’t qualify for the tournament, but there’s Mexico, Argentina, Columbia, Germany, Nigeria, Brazil, Croatia, England, France and many more). 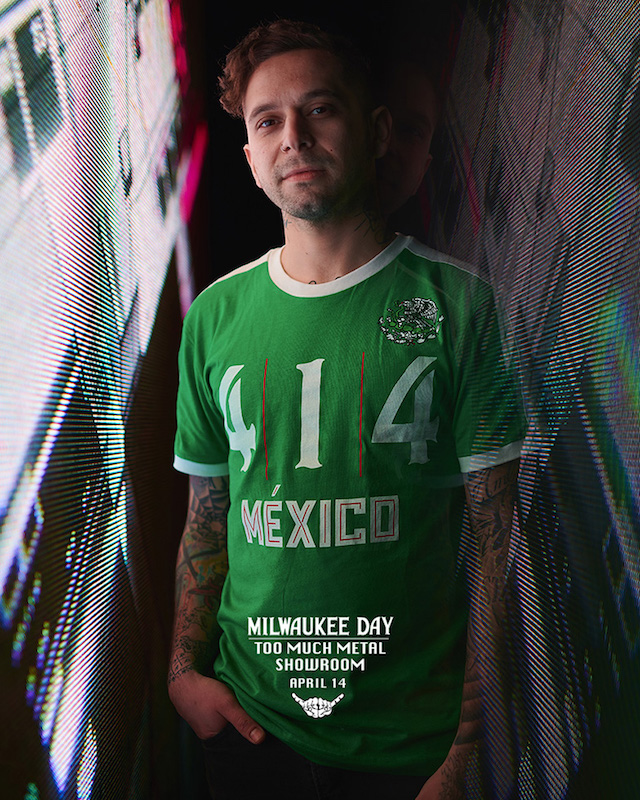 Gillich's Too Much Metal reaches drinking age on June 1