Next time you're at the Oriental, take a good look around. Imagine the loss if it were to close. If the seats were ripped out. If the balcony were to be walled off. If you did all that, you'd have the theater's sibling, The Tower, 757 N. 27th St., which closed in 1975.

Next time you see a film at The Oriental Theater, stop and take a good look around. Imagine the loss to the city if it were to close. If the seats were ripped out. If the balcony were to be walled off. If the walls were painted a patchwork of pastels. If the stage had been removed. If the marquee outside was pulled down, leaving only a barren facade.

If you did all that, you’d have the theater’s sibling, The Tower, 757 N. 27th St., which closed in 1975 and was purchased the following year by a health care facility, which used it as a cafeteria, and then by the county, which used it for meetings and offices.

Though few passersby likely notice, The Tower Theater still stands. The tan brick building has some ornate decoration, but that’s not unusual in the area around 27th and Wells, which has some lovely facades. 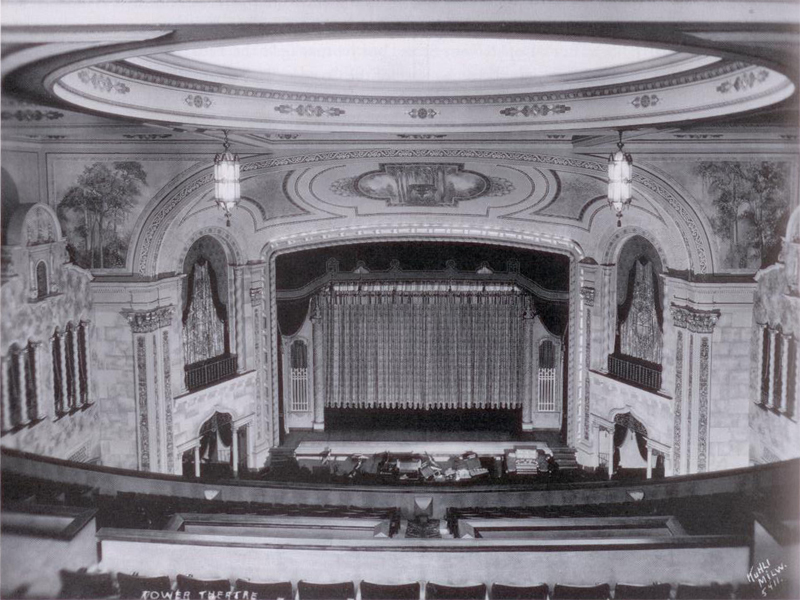 The Tower was built by local cinema moguls, the Saxe Brothers – Thomas and John – as a 1,609-seat movie palace in 1926 to designs by Gustave Dick and Alex Bauer, whose 2,100-seat Oriental and 1,800-seat Garfield (both extant) would open the following year. 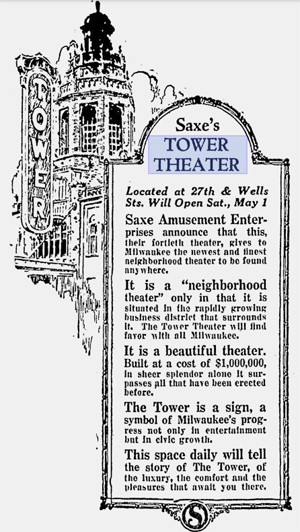 The thriving Saxe company also built the Uptown, with 1,818 seats, in ‘26 and 1,307-seat Plaza in ‘27, as part of a building boom to insulate their success from the pressures brought to bear by the arrival of outside theater chains, wrote Larry Widen and Judi Anderson in their authoritative "Silver Screens" book.

The Oriental was the more lavish sibling, costing 50 percent more than the $1,000,000 Mediterranean-style Tower, but make no mistake, the Tower – which was later part of the Fox chain – was lovely, with its moorish arched openings, swirling Solomonic columns, painted murals, brass organ pipes in the upper boxes flanking the proscenium. As at the Oriental, the original drapery was installed by Gimbel Brothers.

For a time, the Tower and Oriental Theaters were owned by the Annenbergs, who arrived in Milwaukee from Chicago in 1906 and later went on to buy the Philadephia Inquirer. The Annenberg’s son, Walter, was born here in 1908 and became a publisher, philanthropist and diplomat.

Nowadays, the stage floor has been removed, though the proscenium remains. The carpeting and rows of leather-covered seats are gone, but the walls still bear most of their decoration, though garishly painted. The organ pipe lofts are empty, and the original orchestra pit proved short-lived and has long since disappeared.

A wall has been built to section the front half of the theater off from the balcony and the rear part of the first floor of the theater. Remove the wall, however, and the space is restored to its original footprint.

What was once likely just inside the doors to the auditorium is one of those recessed ceilings, lit from beneath, like you’ll also find in places like the Avalon in Bay View and The Modjeska on Mitchell Street – among other theaters.

There is handsome tile work throughout, including in the first floor men’s room. Some areas have glazed tiling on the walls.

Interestingly, the first floor appears to have had only a relatively workaday lobby. Nothing, it would appear, like the soaring, balconied lobby at the Oriental. But upstairs, there is a much larger lobby space, and a balustrade that lined a large square opening for the staircase, which at a landing halfway up split into two sets of stairs. 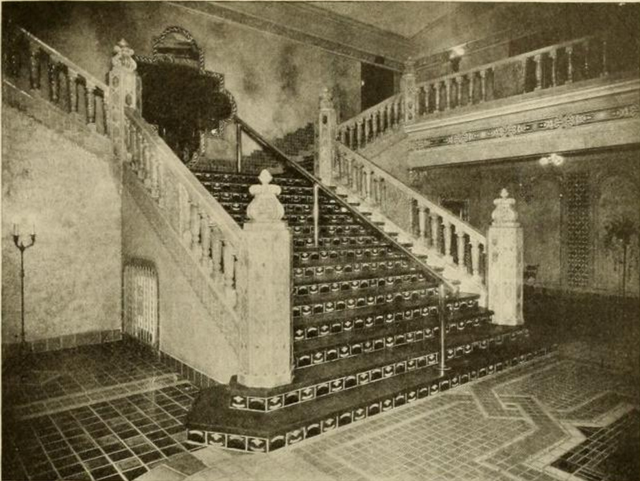 In an old photo of the staircase, the low railing and newell posts of that grand staircase appear fancy enough, but that image did nothing to prepare me for what I found when I went up there. These posts – now lacking their finials, sadly – and the rails and the spindles are also glazed a stunning shade of blue. In the current darkness of the space, a slight glimmer of light was enough to spark a cerulean refraction. 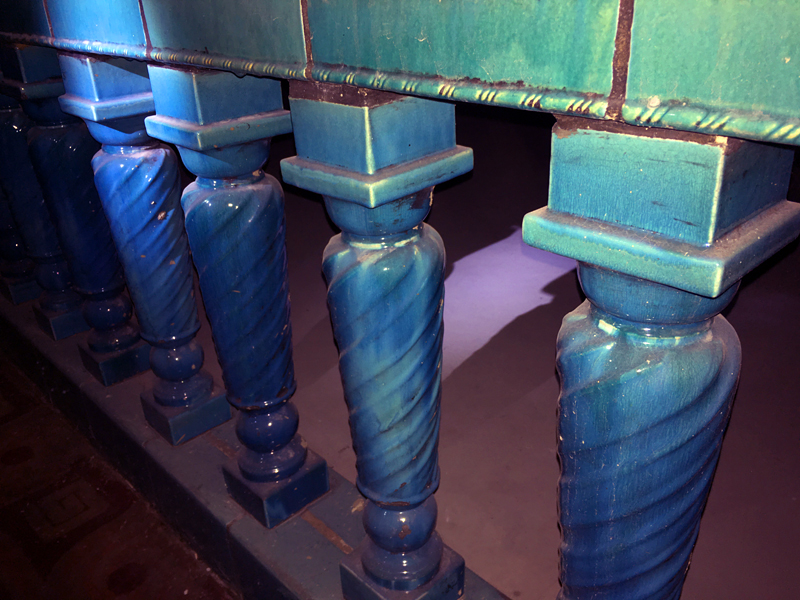 The corridor of the upper lobby that curves around the back of the balcony has some surviving ornament, as does the area around the staircase.

Stepping out to the balcony, things seem a bit worse. Again, the seats are gone. Trios of windows interspersed with more twisted Solomonic columns survive, but maybe just barely. There’s a bit of infrastructure plopped into part of the seating area. And there’s that wall. There’s some junk up in the projection booth, but it’s still there. Up here in the balcony, you get a really good view of the recessed ceiling dome.

Apparently, the Tower also had some backstage dressing rooms, but we didn’t see them. From the stage, which was shallow because the theater wasn’t built for live performances (though the theater would host some across the decades, including vaudeville on Saturdays during the early ‘30s), we could see that the stage was rigged. 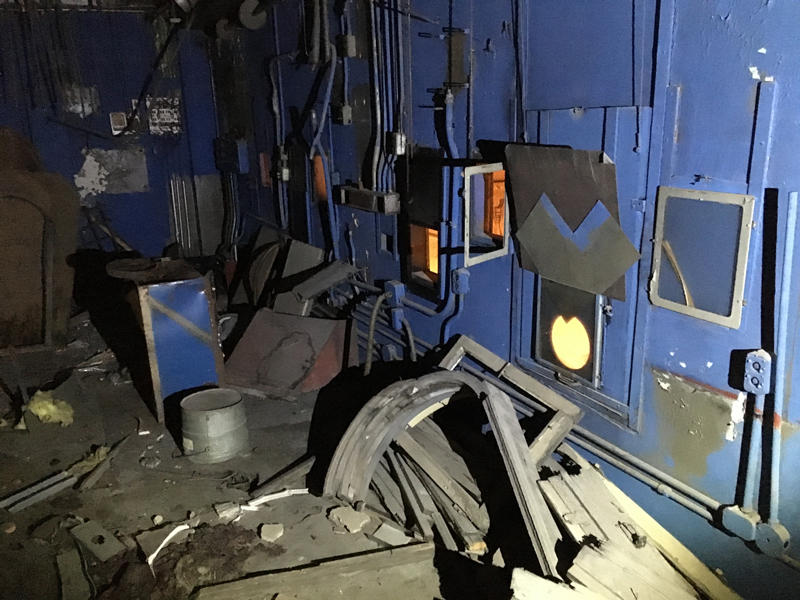 We could also see a staircase leading from a roughly second floor door and going up a number of flights, but we couldn’t access them from below and the other side of the door proved elusive (over time and likely due in part to connections with the other buildings in the complex, some corridors may have been closed off).

In their book, Widen and Anderson recount some interesting stories about the Tower.

"Harold Shaffer, who ushered at Saxe’s Tower Theater ... remembered marching in drills on the theater’s roof to practice good posture and discipline. Shaffer was 17 when he started at the Tower, and like all new recruits, he learned his craft in the balcony. A position on the main floor was a highly sought-after prize awarded only to ushers who demonstrated the ability to perform under pressure." 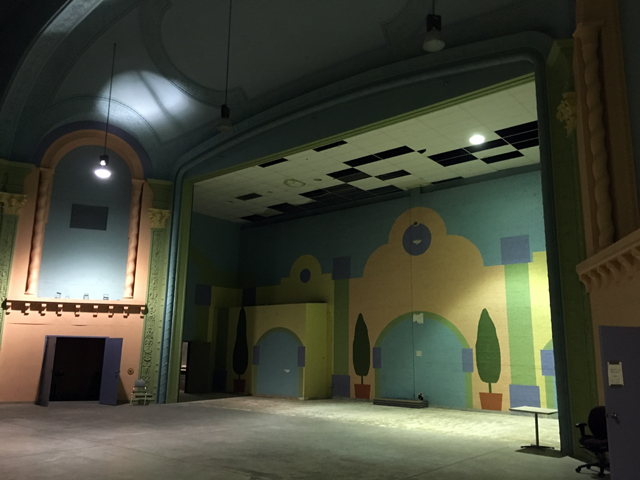 Recently purchased along with two other connected buildings that sit west of the theater by Ambassador Hotel owner Rick Wiegand, the theater is in both surprisingly good condition and disappointingly poor condition, if that makes sense.

As Wiegand pointed out as we stood up in the balcony, while the bones – and in many cases, much more than that – survive, restoring the Tower to its original appearance would be a major,  and majorly expensive, undertaking.

Running along the Wells Street and 27th Street sides of the building are offices upstairs and retail spaces below. These would seem to offer the most immediate possibilities for bringing this building back to life. In the short term, Wiegand is focused on the newest building of the complex, which had been built as Doctor’s Hospital (and was also called Family Hospital). 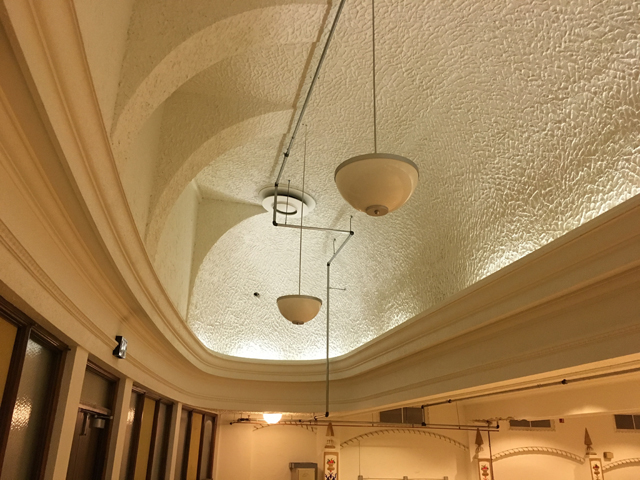 "I’m thinking offices (for that)," Wiegand says. "I don’t think the market is ready for apartments. But if I can get an office user to come in that would be great."

"That one, who knows," he says candidly. "This will probably be the last thing that I do."

Looking around the auditorium, he adds, "If this was restored ... this is cool, (despite being) painted goofy colors, but what do you do with an old theater?"