It's been a while since Victor DeLorenzo released a solo album. One of the founding members of the Violent Femmes, and now half of the duo Nineteen Thirteen, DeLorenzo has put his attention toward the former: a unique blend of drums and cello that you have to hear to believe. But the itch to record something with more than two instruments brought DeLorenzo back into the attic studio behind his East Side home.

It’s been a while since Victor DeLorenzo released a solo album. One of the founding members of the Violent Femmes, and now half of the duo Nineteen Thirteen, DeLorenzo has put his attention toward the latter: a unique blend of drums and cello that you have to hear to believe.

But the itch to record something with more than two instruments brought DeLorenzo back into the attic studio behind his East Side home, and it came with the support and contribution of his Nineteen Thirteen bandmate, Janet Schiff.

"It all came out of the blue," says DeLorenzo. The new EP, "Trancephone," features Schiff, as well as Mike Hoffman on guitar, Matt Meixner on keyboards and Monia on vocals, "but essentially, most of the record is Janet and me," he says.

The five-song record will be released on March 19 on all digital platforms. We caught up with DeLorenzo to talk about it … and learn what the heck a trancephone is.

OnMilwaukee: As a drummer, do you compose music differently than, say, a guitar player?

Victor DeLorenzo: A lot of the pieces started with just me playing some kind of a drum system to either a drum machine or click tracks as a time reference. It was fun because I was trying to utilize a lot of my drums that I have here at the studio and other percussion instruments. So when I recorded the basic tracks, I had no idea in my mind of what the song would be lyrically or melodically other than just the rhythm, what I was playing on the drums. So I would play the drum tracks to some kind of a time reference and then I would go from there.

Listening to the record, I thought it sounded like Nineteen Thirteen, but more rounded out …

One of the sets of criteria we have for Nineteen Thirteen is that it's supposed to be just cello and some kind of drum system. But when we started working on those songs upstairs, Janet said she didn’t know if this was a Nineteen Thirteen album because we do mostly instrumental stuff. And I'm actually indebted to her because she's letting me indulge myself by writing songs that have lyrics and vocals.

It's been a long time since you've done a solo record.

Early 2000s. It's been awhile because I've done three records with Nineteen Thirteen. 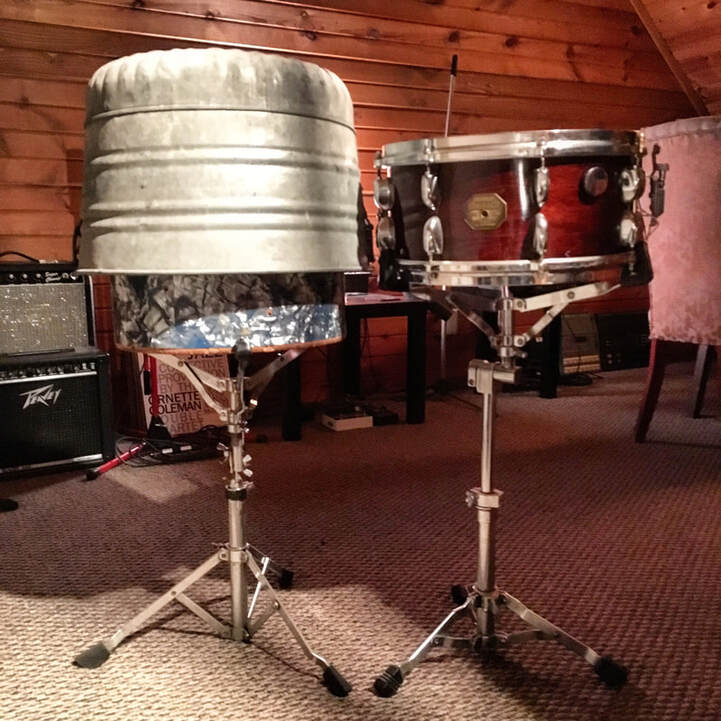 What’s the back story on the "Trancephone" track?

I set out to use the setup that I used on the original Violent Femmes recording of "Blister in the Sun." So it's a Gretsch snare drum, and it's this folk art instrument called the tranceaphone, which essentially is a metal bushel basket over an old single headed tom tom on a snare drum stand, so I can stand up and play it. As an engineer, I had a challenge. I wanted to try and get that sound as close as possible. And I think I accomplished it.

After I did the rhythm track again, just playing to some kind of a time reference, then I started figuring, what kind of bass park would go on here? So I came up with a keyboard bass line and then I started thinking, well, if it's going to be an ode to the tranceaphone, I've got to have some lyric that represents the tranceaphone, not only as just something that's on that Violent Femmes record or a piece of folk art, but something that has an idea of the tranceaphone is almost like a talisman, like a good luck charm. And that's why I'm saying things, "Hey, you're never alone if when you're walking with your tranceaphone," and it doesn't say too many words about that, but it implies that.

That's quite an Easter egg. Even the biggest fan of the Violent Femmes may not get that. But you do.

I mean, that song changed your life and set everything in motion, right?

Sure. I was thinking probably a lot of what went into forming that song, beginning to get the idea of what the world of the song would be. I'm a Bucks fan and so I hear myself playing at every Bucks game when they're in town.

It's everywhere. It's really strange, but I'm proud of it, of course. And it's funny that I'm the hook, that's what everybody does. Everybody claps along to that.