Chef Travis Cook came to Milwaukee for love, but he found so much more. And now he's laying down roots in the Cream City and sharing his creative dishes with a new series of pop-up dinners at Amilinda.

If you’ve eaten at Laughing Taco in Walker’s Point, you’re likely to recognize Travis Cook. He’s the chef with the winning smile prepping marinated pork fresh off the trompo and visiting with guests seated at the counter. He exudes a Midwestern friendliness that belies his deep coastal roots.

And thanks to a series of upcoming pop-up dinners this March (which are selling out fast), Milwaukeeans will have an opportunity to get to know Cook even better.

"I feel like Milwaukee is really on its way to being another Oakland, California …" says Cook as we sip our coffee at the Pilcrow cafe on a chilly winter afternoon. "It has a similar proximity to Chicago as Oakland to San Francisco. And it’s the sort of place where artists and creatives go when they get pushed out of the bigger cities. It’s a great town. The food scene has surprised me tenfold … and it’s only going to get better from here." 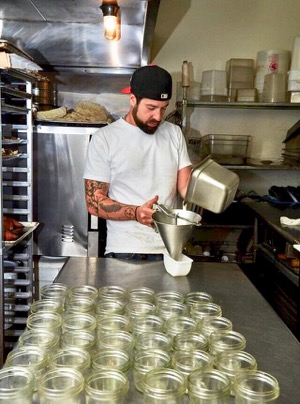 That’s high praise coming from Cook, a chef whose career has taken him across the country, from his hometown of Middletown, Maryland, to restaurant kitchens in New York and San Francisco, where he had the privilege of working with the folks at the award-winning restaurant Saison, from its humble beginnings through earned honors as a Michelin-starred venue.

"I’ve worked with great people, including some really amazing female chefs," he says. "I opened Park Tavern with Jennifer Puccio, and worked with Gayle Piri at Foreign Cinema. And I owe so much to both of them. They’re such talented, strong women, and in an industry that’s overwhelmingly male, they have both held their own. And that taught me a great deal."

In the end, it was love that drew Cook to the Cream City, a place he says he’d never been before, and would likely have never thought to visit.

"My first trip to Milwaukee was during the month of March," he says. "And I thought I was going to have a stroke. It was so f-ing cold."

Despite the chilly weather, his motivation for visiting was rooted in warmth. He’d purchased a plane ticket to visit Samantha Stratman, a Wisconsin girl he’d met when her company flew her out to San Francisco to transform the restaurant where Cook worked into a hub for VIP Super Bowl attendees.

"At the time, I was a year into sobriety," Cook says, noting he struggled with alcohol during a portion of his career. "And I was in the process of re-discovering who I was when I actually showed up to the world. At a time when I was really rediscovering emotion, Samantha made me feel things again.

"I worked beside her for five days, and during that time I saw her work ethic and dedication to what she was doing. She put her work ahead of everything … and yet, she was the sweetest Midwestern girl I’d ever met. She made me rethink everything, including how I treated people."

Cook says he grew so enamored that he asked Stratman to extend her stay in San Francisco. She agreed. One thing led to another, and the two embarked upon a long-term, long-distance relationship.

"There was a point where it became increasingly evident that we were really good for one another … we made each other better," he says. "And I knew I wanted her to be a part of my life."

So last February, Cook moved to Milwaukee, where he landed a job working with Chef Justin Carlisle as he and his wife Lucia prepared to open Laughing Taco.

"The first time I came to Milwaukee I ate at Ardent," says Cook. "And it blew me away. I was so moved by the food and the stories that accompany the food … I went back the next day, knocked on the door, and told him that I wanted to work – for free. And I fell in love."

It was one of the initial relationships that Cook credits for making him feel at home in Milwaukee, a place where he says he now feels like he’s established a true industry family and a home away from home.

"Family is at the heart of everything," notes Cook. "I’m thousands of miles away from my own, but I’m creating a new family here. I’ve loved meeting people like Ryan [Hoban] from Pilcrow, who is just doing this amazing job and making a living for his family. And Thomas Hauck … and Paul [Zerkel] at Goodkind … he’s just such a great guy and chef. I’ve got a huge crush on him.

"Milwaukee is great. It’s still this great place for young, creative people … we still have a chance here to really make our mark. It really makes me want to stay here, start a restaurant and really give back to the community." 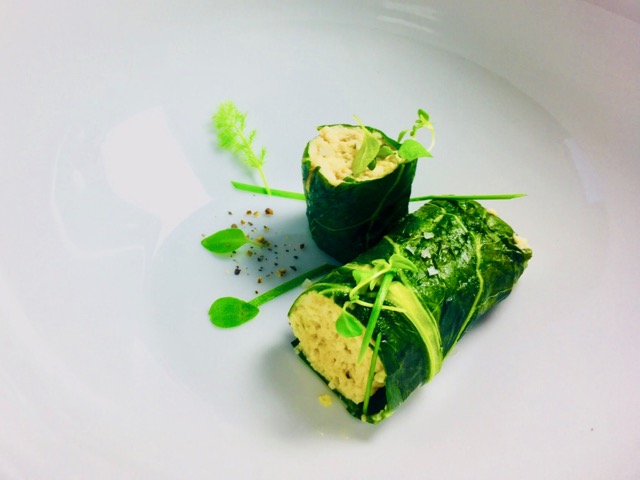 Thanks to the generosity of another San Francisco transplant – Chef Gregory Leon of Amilinda, who also got his start hosting pop-ups – Cook will be showcasing some of his creativity at a brand-new pop-up dinner series that includes inventive dishes including a snack made with beets prepared a variety of different ways (pictured above); unexpected pairings like apple, black garlic, fennel and radish; a chicken entree in which the potato side dish serves as a comforting sauce; Japanese inspired cured salmon with housemade mango umeboshi and Meyer lemon; beef with escabeche, avocado and coffee; and a dessert simply titled "Pop."

"This pop-up is about food that I love to eat," says Cook. "I’ve worked for so many years cooking food for other people. But this is the food that I’ve always imagined, and that I now have the skills to create. I’m all about creating dishes that surprise people, that make them rethink an ingredient or fall in love with something they thought they weren’t very fond of."

The first installment of the dinner series on March 5 sold out in less than two days. However, Cook has already scheduled a second installment, which will be held on Monday, March 19. The dinner, he says, is meant to be fun and accessible. And that’s reflected in both the price (a mere $60 for six paired courses) as well as the tongue-in-cheek name – Travisty – both a play on Cook’s first name as well as a reference to the inherent nature of pop-ups.

"It’s either going to be amazing or it could be a travesty … it’s a pop-up. There are any number of x-factors involved," he notes with a wink.

But Cook’s hope is that the dinners will provide people with a more well-rounded understanding of his style as a chef, as well as offering them an opportunity to experience dishes that will live on as new, beloved memories.

"There are two things that can make you time travel," says Cook. "Food and music. It’s music when you hear that song that takes you back to childhood … and it’s food when I put a dish in front of you and suddenly all you can think of is your mother’s pot pie. That’s magic. And that’s what I want to share with people."

The next Travisty pop-up dinner will take place on Monday, March 19 at Amilinda,  315 E. Wisconsin Ave. Seats are available for two seatings: one at 5:30 p.m. and another at 8 p.m. The cost is $60 per person and includes six courses and beer pairings (along with a few additional surprises). Tickets can be purchased online at TravistyMKE.com.