Triciclo Peru's empanadas have been gaining in popularity thanks to their deliciously flakey baked dough and authentic fillings. But the story behind the operation is just as compelling.

The truck, which serves empanadas in five flavors – beef, chicken, chorizo, sweet potato and corn and cheese ($5 each) – launched about a year ago. And their empanadas have been gaining in popularity thanks to their deliciously flaky baked dough and authentic fillings. But the story behind the operation is just as compelling. 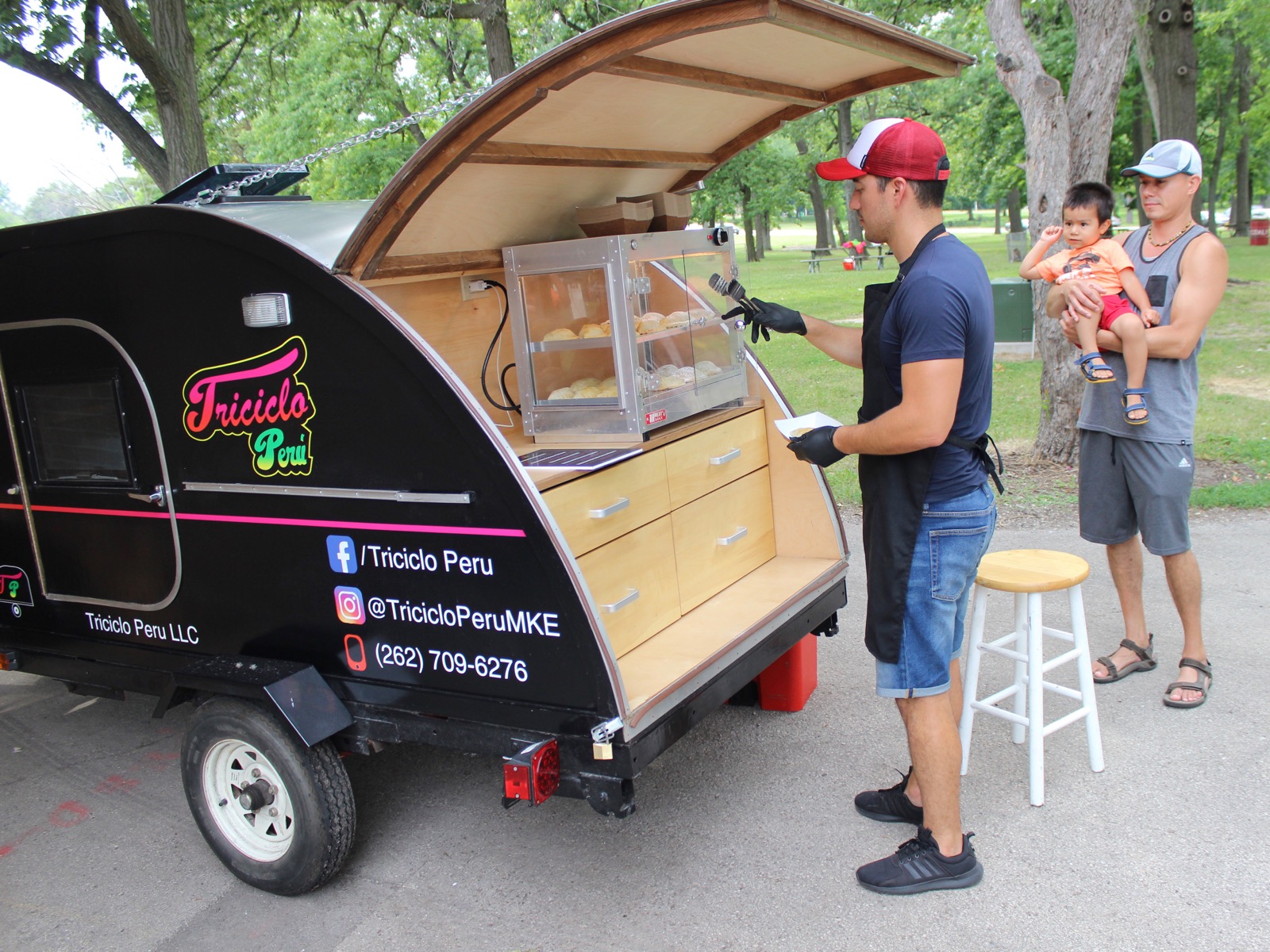 Triciclo Peru is the brainchild of Mario Diaz and Amy Narr, a married couple whose chance meeting in Peru changed the trajectory for both of their lives.

Narr, who was born and raised in West Bend, came to Milwaukee to earn her degree in business administration and marketing from UW-Milwaukee. After graduation, she signed on for two years in Chiclayo, Peru, with the Peace Corps, where she worked assisting women with business and financial literacy. About a year in, during a vacation with friends, she found herself stranded in Trujillo, Peru over the Peruvian Independence Day holiday (July 28).

Since no available planes were flying out that day, she took to the beach, where she met Diaz, a young advertising executive and Lima native who was also enjoying the holiday.

The two hit it off immediately and Narr says they maintained a long-distance relationship for about a year, after which she applied for a one-year extension of service that allowed her to work out of the Peace Corps offices in Lima. The two were married a year later. 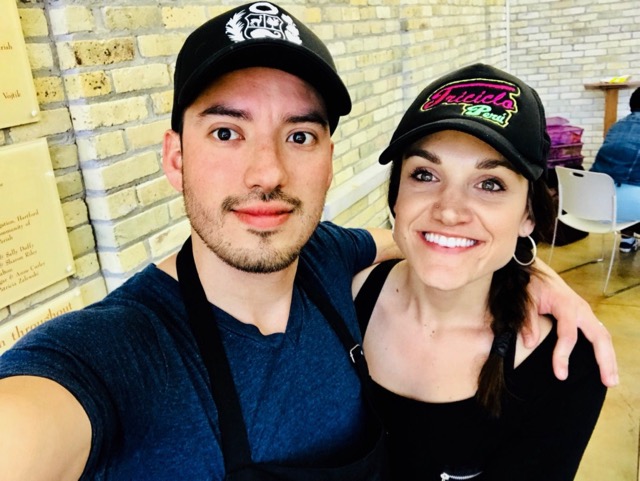 Taking a chance on Milwaukee

In December 2016, the couple decided they needed a change of pace. After contemplating a number of locations, including Florida, they opted to move to Milwaukee, where they lived with Narr’s family while getting their bearings.

"I was excited to introduce him to Milwaukee culture," says Narr, noting that they spent a number of months exploring the city, eating fish fries and fried cheese curds, visiting breweries and immersing themselves in all things Cream City.

Diaz, who grew up near the ocean where seafood was plentiful, says he misses a number of things in Peru, including the flavors of his hometown, which he says he simply can’t find anywhere in the area.

However, in the meantime, he’s also grown to appreciate a few things about Milwaukee. "I like the snow," he says. "And the wings here are better than at home. And the beer."

Over time, Narr took a job with a local nonprofit. But Diaz found that his degree from Peru didn’t quite have the same value in the U.S. as it did back home, and – despite English lessons – the language barrier presented some unique challenges to advancing his career in advertising. So, he began thinking about viable alternatives.

A passion for flavor

"I grew up cooking," he says. "In Peru, we cook for family and friends, and eating meals together is a part of our everyday life. Food is love."

Food is also something for which Diaz has a passion. And that passion formed the basis for the launch of Triciclo Peru. 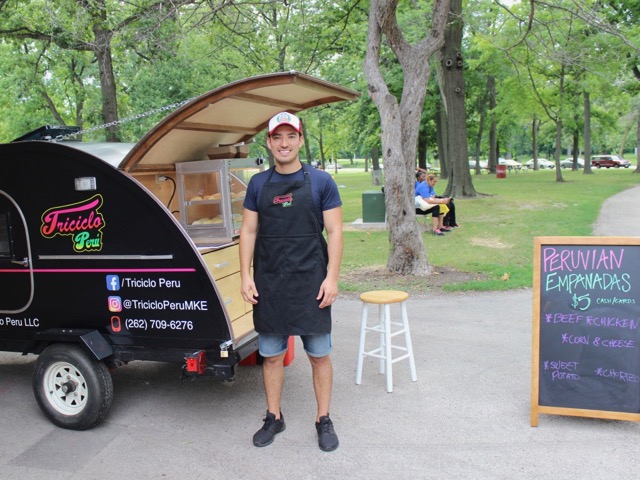 The food cart, he says, is not only his way of sharing authentic Peruvian recipes he grew up eating, but it’s also a tribute to working-class Peruvians, many of whom were driven out of their homes in the Andean Highlands by Shining Path terrorists in the 1980s. Seeking safety, about 60 percent of the peasant refugees gravitated towards Lima, a city that houses one-third of Peru's population. Many of these displaced refugees sought a living as street vendors, making and selling anything they could to make ends meet.

All around Lima, he says, you see tricycles (triciclo) with baskets mounted on them. These are peddlers, who drive around the city announcing their wares using megaphones.

"A Peruvian rock band, Los Mojorras, wrote a tribute to these working class people," Diaz says, "and the lyrics say they are ‘the people that move the country along.’

"It is true," he says. "They are strong. They’ve persevered, and they do what they have to do to make a living. It’s hard work. And now I am here, and I’m doing the same, working hard to make a living."

Diaz’s tribute to the working class is evident in not only the name, but also the Triciclo Peru logo, which is written in chicha, a throwback font from the '80s. It’s also evidenced in the authenticity (and deliciousness) of his empanadas.

An empanada for everyone

Each one begins with handmade dough, which is rolled, shaped and filled with ingredients before being baked (not fried, as most empanadas are) until golden brown.

Among the fillings, he says, the Lima (beef) and Chiclayo (chicken) are most authentic in terms of their flavor profiles. The beef feature onions, garlic, raisins and pieces of hard-boiled egg, while the chicken features shredded meat with onion, garlic red pepper, green olives, raisins and egg. Both are sprinkled with powdered sugar (an element that makes the savory components in the empanadas pop) and served with lime wedges and dipping sauce.

The beef, Diaz says, is perfect with his earthy Peruvian black olive sauce while the chicken pops when eaten with his aji pepper sauce.

"The idea," notes Narr "Is that you bite into the empanada, squeeze in a bit of lime and hot sauce, and then enjoy all the flavors together." 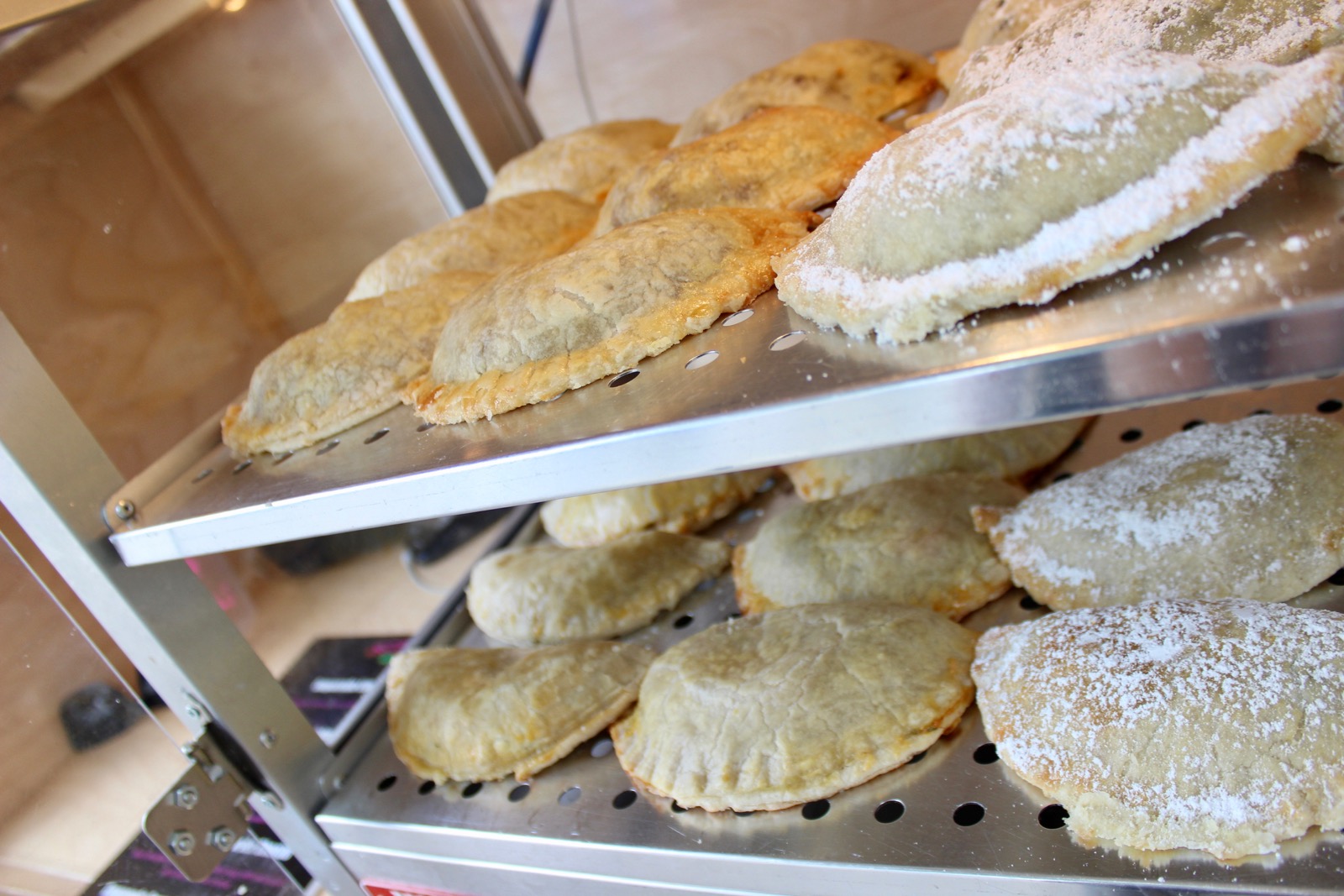 Additional flavors – each of which showcase a fusion of American and Peruvian inspiration – include the Cusco, which features sweet potatoes, collard greens, garlic, onion, parmesan and gouda and the Wisconsin, which is filled with chorizo, scrambled eggs, red peppers and cheddar.

The Ancash empanada – which is filled with corn, parmesan and white cheddar – is inspired by the snack made from choclo (Peruvian corn) and fresh cheese that’s popular in the Andes. But, Diaz notes, this combination wouldn’t likely be found in an empanada. It’s excellent, he says, served with cilantro sauce, which is made with a combination of the popular herb, mayonnaise and rocoto peppers.

Thanks to customer support, Triciclo Peru is also currently searching for a location where they can open a brick and mortar storefront or cafe. Watch OnMilwaukee for details as they develop.

In the meantime, you can find Triciclo Peru at a variety of farmers markets including Jackson Park, Brookfield, Tosa and Riverwest (see our Farmers Market guide for times and locations). They will also be at the Newaukee Night Market on Aug. 15 and Sept. 12 ( from 5 to 10 p.m. on Wisconsin Avenue between 2nd and 4th Streets). The mobile food operation also offers delivery services and catering.