Milwaukee Fire Department responded to a three-alarm blaze at Trinity Evangelical Church, 1046 N. 9th St., at Highland, before 4 p.m. today and within minutes a fourth alarm was sounded.

The church that is home to Milwaukee’s oldest Lutheran congregation is burning this afternoon, and the images arriving from the scene don’t look good.

Milwaukee Fire Department responded to a three-alarm blaze at Trinity Evangelical Church, 1046 N. 9th St., at Highland, before 4 p.m. today, and within minutes a fourth alarm was sounded. There was no initial word on injuries.

The fire was reportedly under control as this story posted at 5:25 p.m., however there were still nearly 100 firefighters, including the Structural Collapse Support Unit, on site.

Flames shoot out of the building. @fox6now pic.twitter.com/rhW32dTAzh — Ben Handelman (@BenHandelman) May 15, 2018

According to WITI-TV, the blaze started on the south side of the church, where construction work was reportedly underway. Soon, the roof was gushing smoke and flames appeared. Within minutes, photographs show, the entire roof was engulfed in flames and had begun to collapse.

Once the roof did collapse, according to one onlooker, more and more water was poured on the flames, which, according to that FOX 6 report, caused the shorter steeple on the south of the cream city brick facade to collapse. Fortunately, the brick tower supporting the steeple appears to have survived.

The church was built in 1878 to plans by Frederick Velguth, and the stunning Victorian Gothic church is listed on national, state and local historical registers.

I visited a few years ago and wrote this look at its history.

Milwaukee Brewing Co. founder and CEO Jim McCabe was nearby, at the brewery his company is currently building across the street from the church, and he shared these photos, noting that the clock on the north steeple continued to keep time during the blaze. 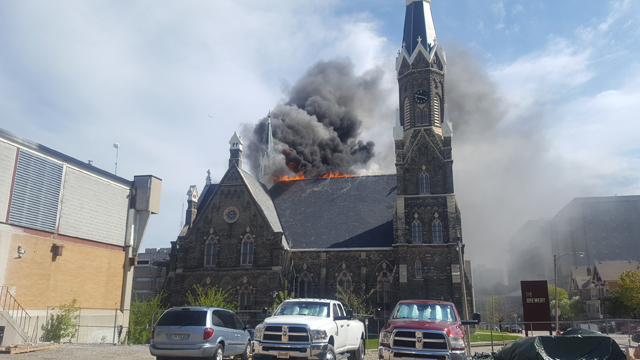 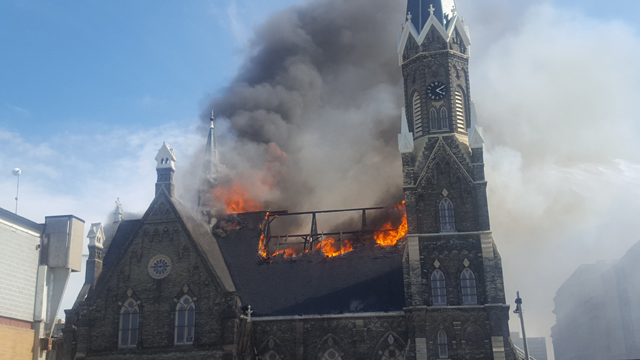 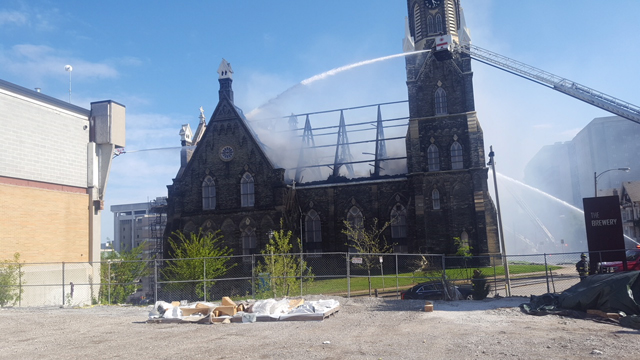 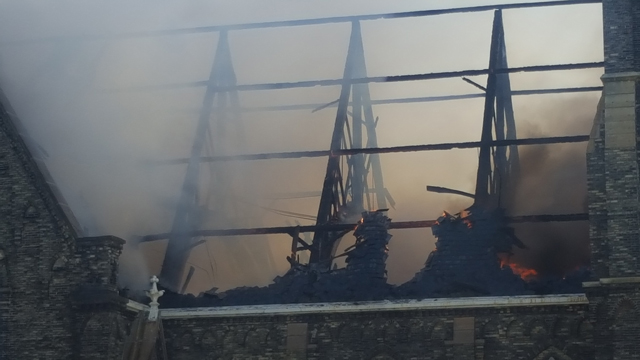 While reports have said, unsurprisingly, that the damage to the building is profound, I hope the congregation can rebuild this historic structure that is a Milwaukee landmark.