This week, surprise, surprise, Donald Trump's image grows even larger as his coif get plastered on one of the more visible streetside outdoor ad spots in Downtown Milwaukee.

Last week, I reminded you Donald Trump stands tall in Downtown Milwaukee on the wall inside the iconic Safe House.

This afternoon, The Donald’s local image grew even larger when Kingshead Salon, 1246 N. Van Buren St., plastered his smiling-ish mug on its high-profile billboard on the south side of the building.

Since 1968, owner Dave Lemke – with the creative help of Eichenbaum & Associates – has promoted his salon using this high-profile outdoor ad space. The Kingshead billboards, which change about every four months, have featured images of Elvis and Queen Elizabeth in the past.

"This time, we went with Trump," says Lemke. "After all, he's the most famous man in the country, and people can't stop talking about his hair. So, as a salon, we thought we'd take advantage of this."

The billboard features a portrait of Trump that illuminates his famous mane along with the words, "We Can Make Your Hair Great Again."

"There are absolutely no politics involved here, just a commentary on his hair and how much people are talking about it," assures Lemke. "And hopefully they will continue to do so for a few more months."

No word as to whether Kingshead plans to style "man buns" or not. 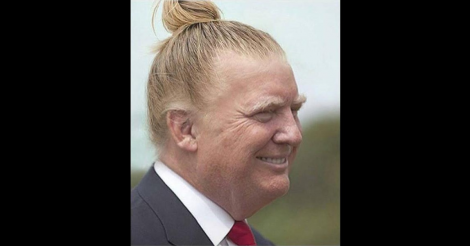 Trump will appear in Milwaukee on Tuesday, Nov. 10 for a Republican presidential primary debate at the Milwaukee Theatre, just three days after hosting "Saturday Night Live."

Molly Snyder contributed to this report.