Like the rest of us, TV and radio professionals adjust to working from home

While many of us can get by with Zoom meetings in sweatpants, members of Milwaukee's broadcast media community must still look and sound good, creating makeshift studios in their own homes, delivering news and content just like they always have.

So many Milwaukeeans are adjusting to working from home right now. Zoom meetings in pajamas, turning bedrooms into offices, juggling getting stuff done while parenting kids’ online school … these are stories our generation will tell our grandchildren.

But while many of us can get by with pixelated laptop video conferences in sweatpants, or finally making that "meeting that could’ve been an e-mail," an actual email, members of Milwaukee’s broadcast media community must still look and sound good, creating makeshift studios in their own homes, delivering news and content just like they always have.

Steve Chamraz, an anchor and reporter at TMJ-4, says the transition to working from home was, "shockingly easy."

"If you told me when I was an intern at TMJ4 back in 1994 we would have anchors doing the news from their dens – I would have laughed," says Chamraz.

"But the internet speeds are so fast, we can send good quality video back to the station over a laptop. Our technical team figured out how to send prompter to us in real-time – so we can be full participants in the broadcast. It’s really amazing how easily all that came together. Making it sound good was a little harder. I went through three or four microphones before we nailed one that didn’t sound like I’m in a tin can."

Ted Perry, a longtime anchor at Fox 6, has found the experience more surreal.

"My house is pretty small (I live alone) and I had two choices: my living room or my home office. I chose the office because they have set up lights and a camera and little box called a Dejero which is what gives me the ability to go live," he says.

"Don’t ask me how it works, I have no clue. Our engineers and photography team did a great job hooking me up with a laptop that I can use to write scripts and then it turns into a teleprompter." 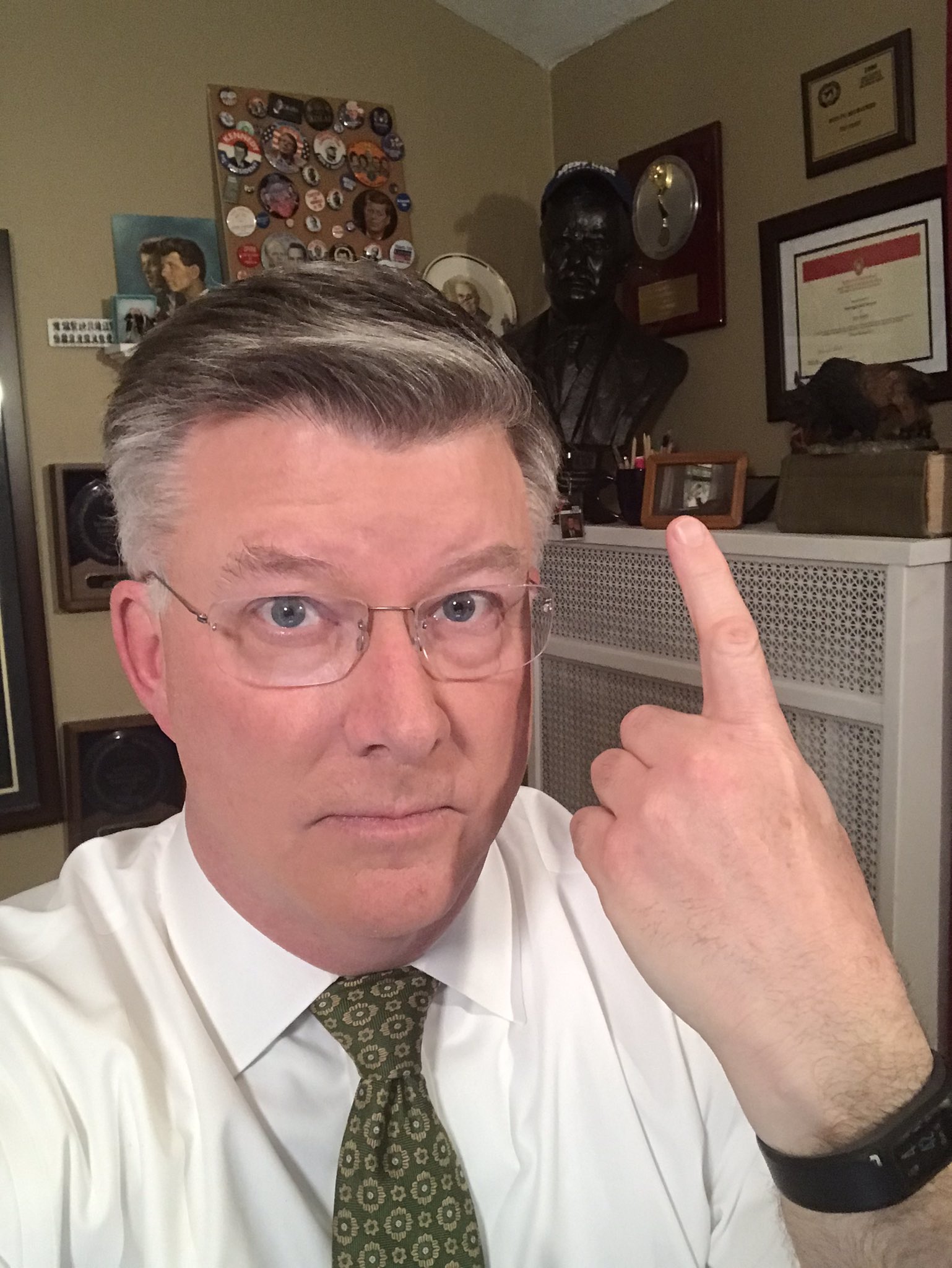 "By the way," notes Perry, "my home office has a ‘presidential’ theme. I’m kind of a presidential history freak. Every administration is represented in that room either with a book, a painting, a knick-knack or a tiny statue. The bust you see behind me when I broadcast from home? Teddy Roosevelt."

In the radio business, the challenges are mostly the same, but Jon Adler, the morning show host at FM 102/1, says broadcasting from outside the studio feels much like doing a radio remote, except that he added a blanket behind him for sound proofing.

Says Adler, "My ‘home studio’ is in our basement in what we already call ‘the media room’ (only because it's where my CD and movie collection is stored)." 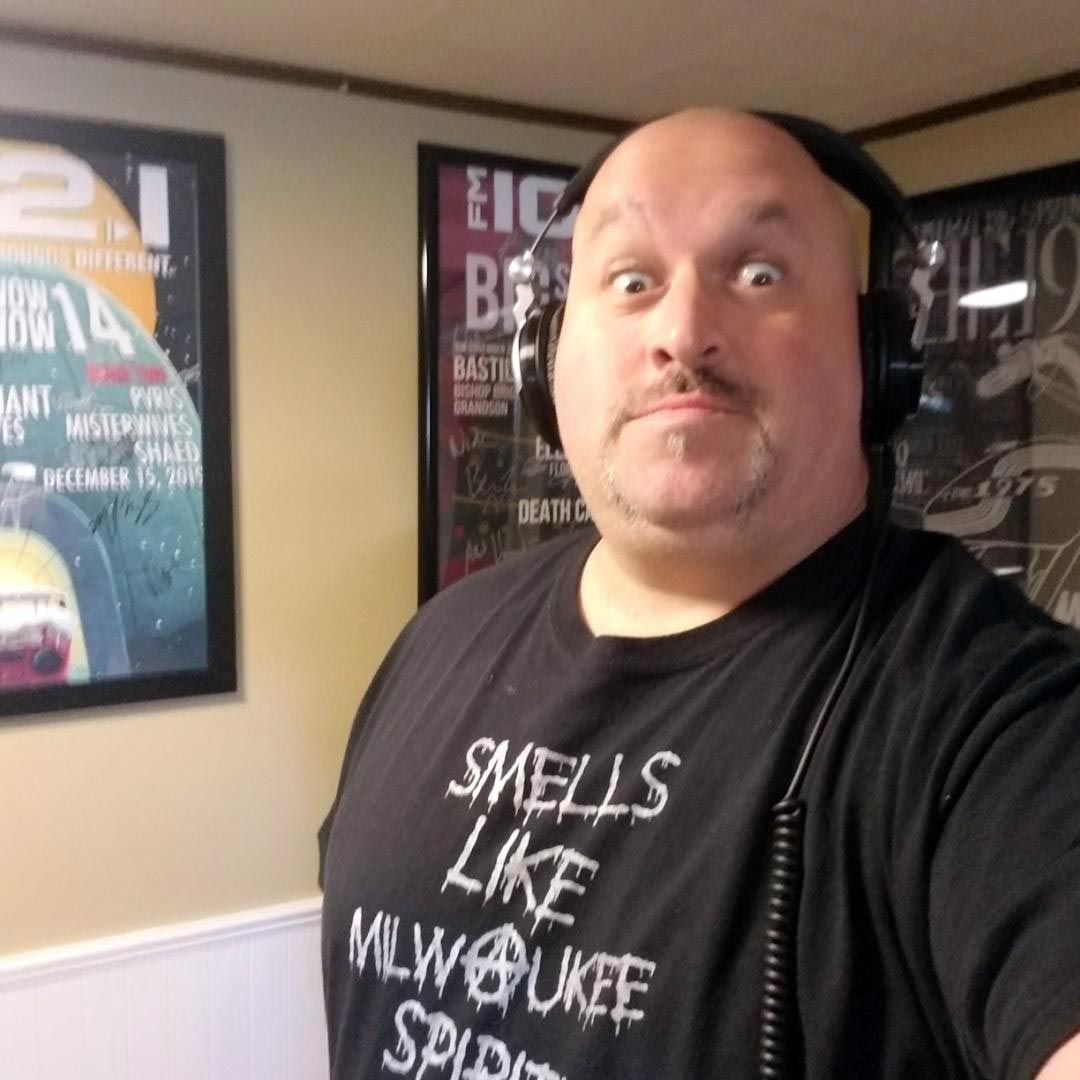 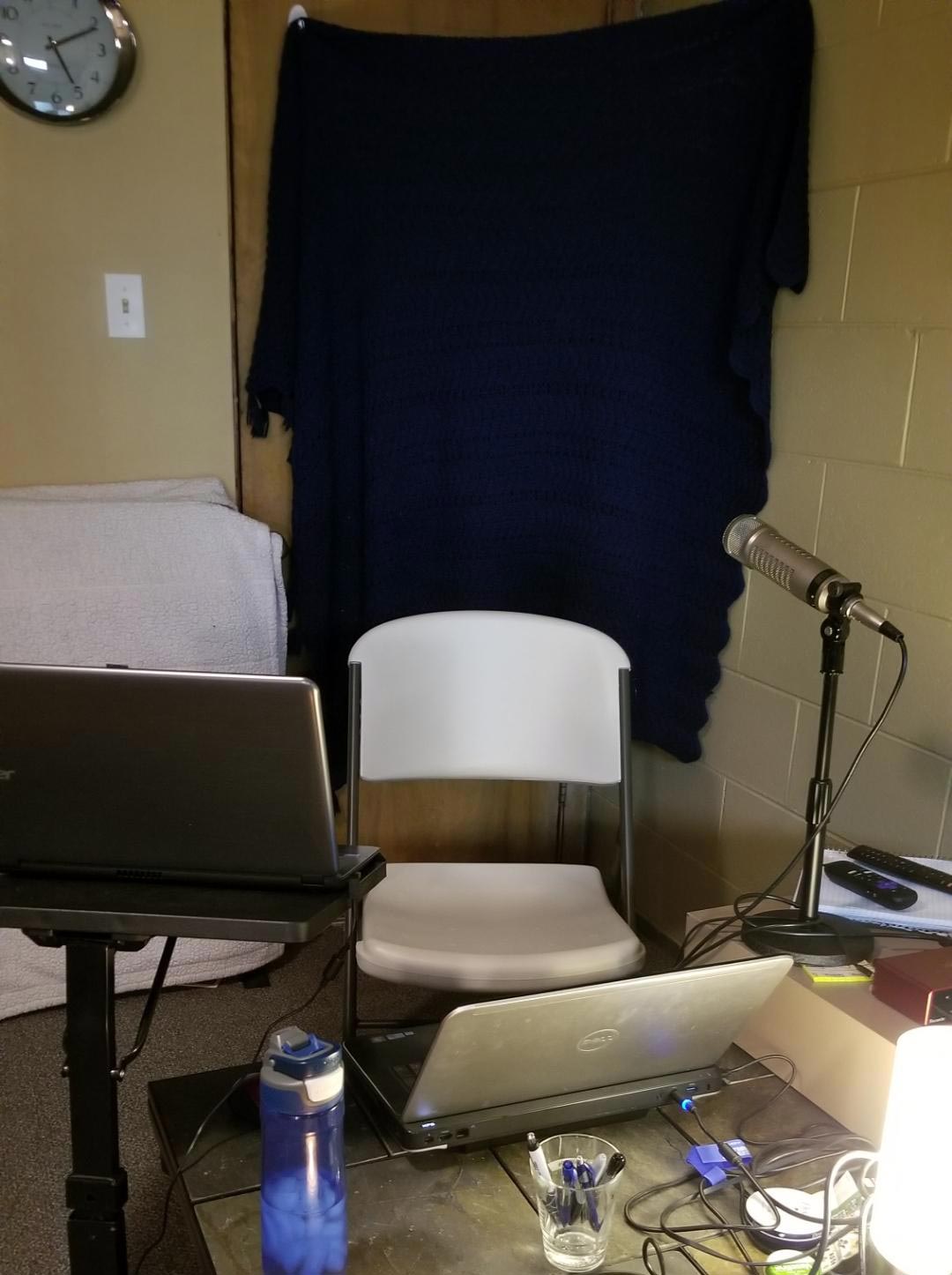 Chamraz chose his den for his studio – mostly because his wife, who is also working from home, beat him to the basement rec room.

Says Chamraz, "It’s a quiet room where we can close the door and keep the dogs out. It’s a little small with all the lights and other gear in here, but it does the job."

Like stations across the country, Chamraz stopped attempting to make his home studio mirror the newsroom. That choice was intentional to demonstrate that everyone is in the same boat, and that viewers appreciate seeing him in his own house.

"My first try at a backdrop was in the garage," says Chamraz. "I set up a giant TV as a backdrop and had it show the same cityscape images we use in the studio. It was just too hard to keep the lights from reflecting off the TV. My den was the fallback position … and it’s a lot more comfortable. I have heat!"

He notes that his viewers are paying attention, too.

"A local artist sent me a couple emails when she saw her work hanging behind me on TV. Another viewer saw I changed something else in the background and emailed that he noticed the change." 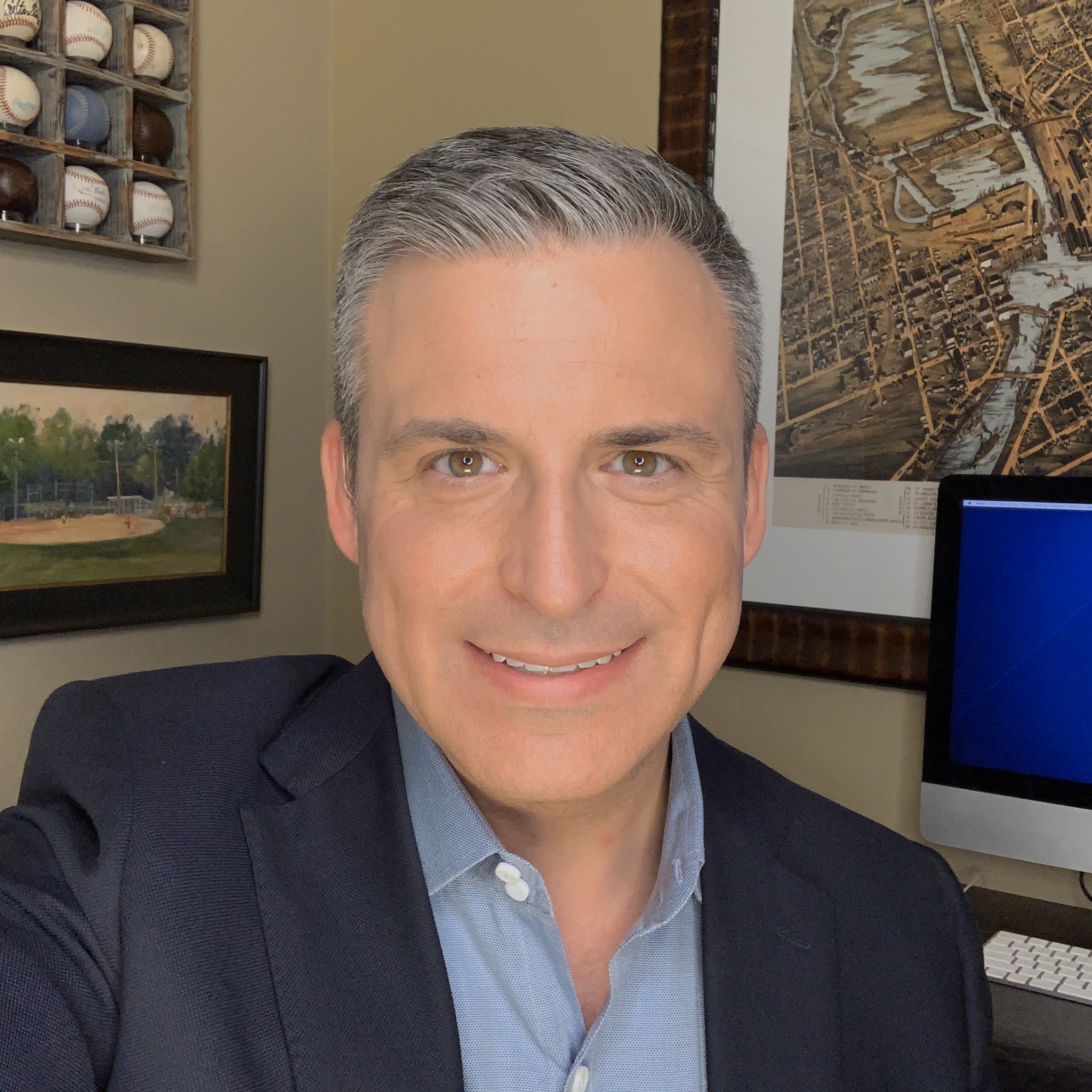 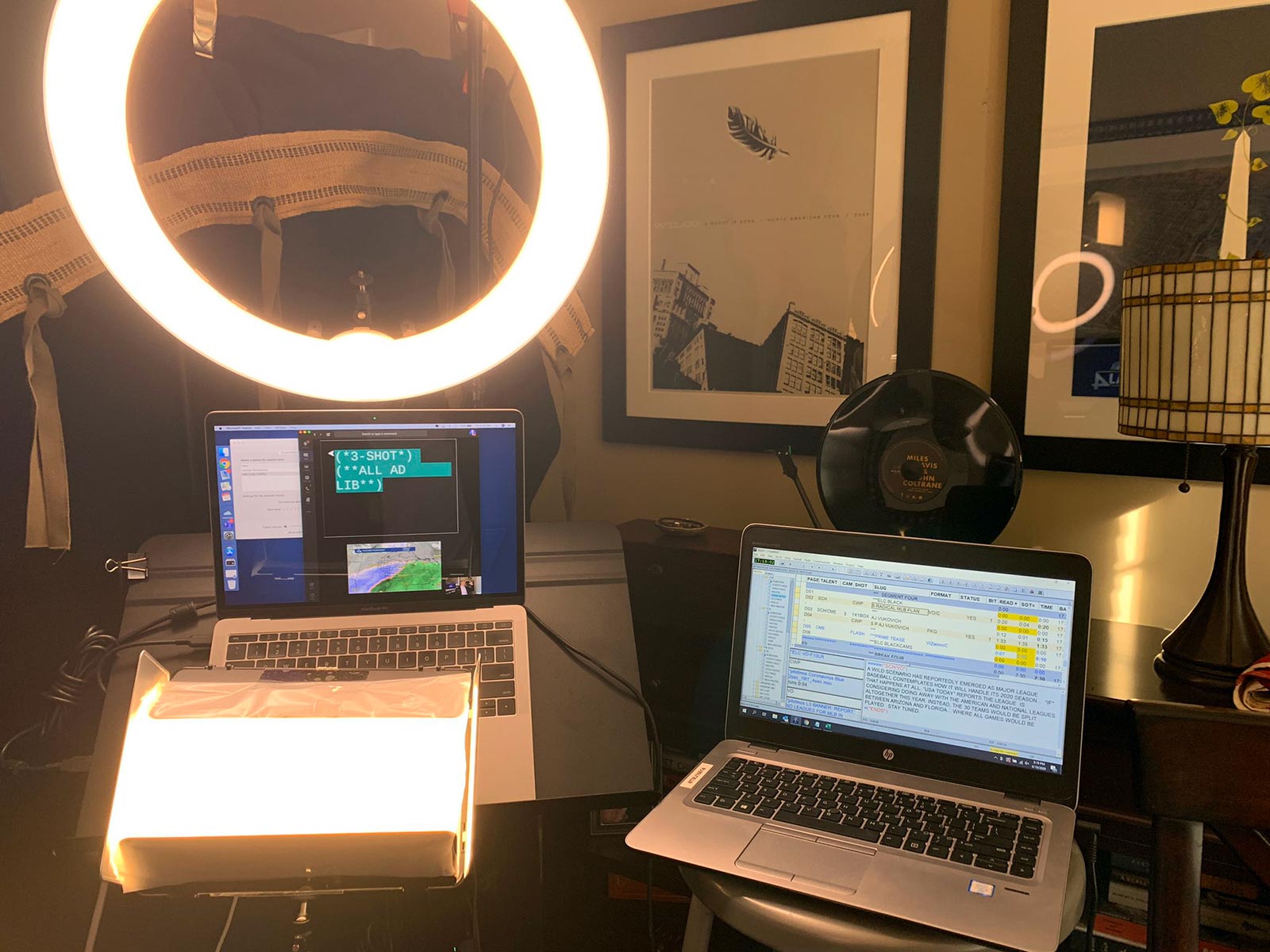 This is what Chamraz sees.

So, is it hard to get "TV-ready" during these challenging times? Perry says it’s just different.

"Now, we’re doing one week in-studio and one week going live from home," he says. "So Ben Handelman and I are in-studio one week while Stephanie Grady and Mary Stoker Smith are at home. This is done so the studio has only one person in it at any time. Ben and Steph do their shows (4, 6 and 9) and Mary and I do the 5 and 10. But I try to keep to a routine: in makeup at a certain time, in place in a certain time but I also have to turn on all the technology, and that adds a few minutes. I am wearing exactly what I’d wear at work but I must confess, I’m anchoring these shows barefoot, which is nice."

Says Adler, "When I get to the FM 102/1 studio I snap into work mode. Working from home in the first few weeks was very distracting and took a while to really get the ‘this is work’ mentality."

Chamraz says that having the same technology that he has in the newsroom has made the transition seamless. He has access to the company computer network and the same newsroom software as everyone else.

"Between video conferencing, text messages and email – we are all in touch all the time," he says. "It really is amazing how easy it is to scatter everyone to the wind and still put together the same amount and quality of news."

Of course, not everyone in the industry can work from home, but both Perry and Chamraz say their stations are keeping the bare minimum of people in the studio, and the skeleton crews are doing a great job keeping their distance from each other.

"We were built to be a hub," says Perry. "You have to have some people in here; directors, one producer who’s in our ear coordinating each shot because we can’t see a monitor at home. The TV signal that comes to my home is worthless because it’s 10 seconds behind and so I actually turn the TV off during my home broadcasts."

"I think there are 10 people or fewer in the building at a given time, which is what the social distancing guidelines suggest," says Chamraz.

"I assure you at Fox 6 it’s done for safety," says Perry. "Our management was on this early and came up with a plan to have reporters and photographers work from home and in pairs. Then producers, then editors, and finally anchors. I am in absolute awe of my co-workers and how they’ve adapted and flourished."

But these are scary times, and the media is not immune from the anxiety we all have, even though it’s their job to project a level-headed confidence, and in the case of Adler, a sense of humor.

How are these three holding up?

Says Adler, "My wife and I are both working from home, so we both have our work spaces while we try our best to get through a list of subjects to go over with our 7-year-old son. Needless to say that can be stressful, but we try our best. I'm trying to be as cautious as I can since I have both asthma and diabetes which puts me in a higher risk group."

Both Perry and Chamraz feel fortunate to still have a job, too.

"You know, I’m lucky," says Chamraz. "I’m still working. My wife is still working. I’m glad I have something to do in the middle of all this. It’s the biggest story of my lifetime … so far. I’m glad I can help make sense of this for people on the bad days … and share with them the laughs and the hope that make it bearable."

Says Perry, "I ache for those who have lost their jobs either temporarily or permanently. My psyche is fine. Some days are harder than others. I don’t like working from home because I love the vibe of our newsroom. I adore my co-workers and even though fewer of them are in house, I look forward to seeing them. But I also joke that I’m built for this."

They’re also using this time to do whatever activities they can, including frequent dog walks.

"I’m a bit of a loner to begin with so it’s not much different but I miss Colectivo, and I miss a post-work beer at Draft and Vessel," says Perry. "But I’m actually running more than I ever have and have set aside a half-hour each night to learning Spanish. I’m determined to emerge from this having accomplished something. I’m keeping a small but crucial social circle … from a distance, of course."

Says Chamraz, "When I get a little case of cabin fever, I walk the dogs. They’re the ones who are coming out of this the best – the dogs. I have never seen so many people out walking their dogs in the middle of the day!"

But none of these three can predict when they’ll be back in studio. Adler and Chamraz say they are hoping sometime in May. Perry says he has no idea.

"I don’t ask because honestly no one knows. The concentration now is day-to-day safety while putting out the best product possible. I can’t rave enough about how impressed I am with everyone here. I’m so proud of these people and I’m honored to be their co-worker." 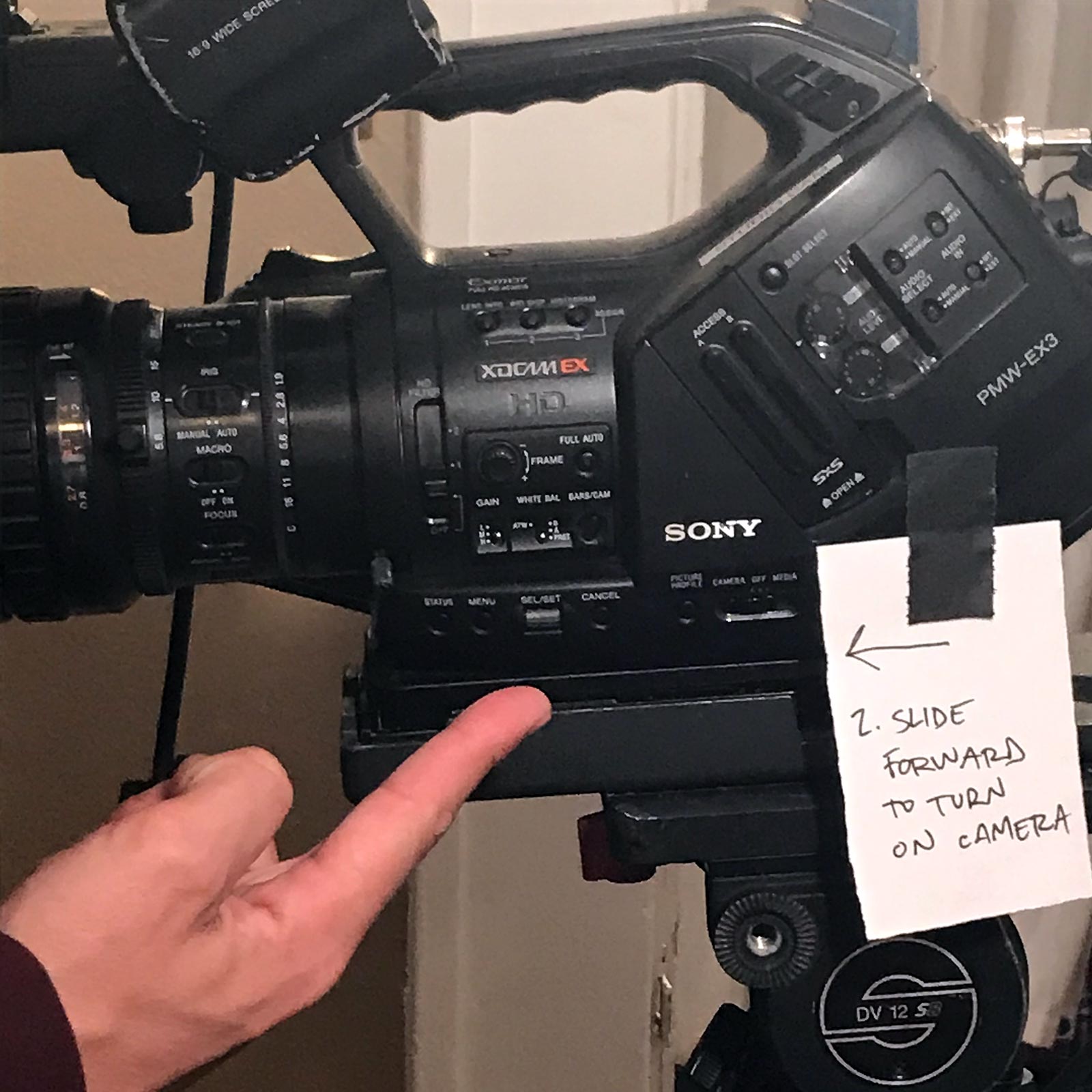