Battling some stage fright is nothing compared to what Tweed Funk frontman Joseph "Smokey" Holman's fought against over the past year: multiple myeloma, an ailment that kept the soulful singer and his band sidelined for over half a year.

After over half a year away from the stage, even a veteran performer like Tweed Funk frontman Joseph "Smokey" Holman can feel a little stage fright headed back behind the mic again.

"It’s kind of scary as far as going back in," Holman admitted, going into Saturday night’s show at Anodyne in Walker’s Point – the blues band’s first gig since last summer.

Battling a few butterflies, however, is nothing compared to what Holman’s fought against over the past year: multiple myeloma, a cancer of one’s white blood cells, an ailment that kept the spirited and soulful singer sidelined without the strength to sing or perform.

That is, until now.

Holman and his band mates first suspected something was wrong going all the way back to late last winter, when he would be hit with sudden dizzy spells. After several frustratingly inconclusive hospital visits – including one appointment with "an arrogant-ass doctor who told me it was maybe something in my head" – one doctor brought Holman in for blood tests and discovered his blood count was low. A few more tests and a bone marrow biopsy later, the diagnosis was made official in April: cancer.

"I think everybody was shocked – but at the same time, Smokey had been sick for a while," recalled Tweed Funk drummer Dave Schoepke. "In some sense, it was kind of nice to know that we at least knew what was wrong with him, because before that, it was this big mystery about what’s going on. Of course, you never hope that it’s cancer, but at the same time, it was like, ‘OK, well, this is at least what it is; what can we do about it?’"

At the time, Tweed Funk was just putting the finishing touches on its latest album, "Come Together," and was preparing to hit the road, including a run of East Coast shows, to support it. Holman, however, had already begun some treatment and chemotherapy, making it harder and harder to keep up his strength for the gigs.

"He wanted to keep working throughout all of that because he wanted to have something to keep looking forward to," Schoepke said. "Instead of just saying, ‘OK, you’ve got cancer, you’re going to be going through chemo, let’s stop,’ he was like, ‘Let’s keep going as far as I can.’"

So, in July, the group came to a mutual decision to go on hiatus so Holman could get healthy again without the stress and strain of performing. A few months later, Holman would undergo the next big step in his treatment: donating his own stem cells for a key transplant.

"Then one day, they took me down to x-ray, and I came back up – and all my strength had left me. They told me that was normal, that everything was going to break down and rebuild itself. And that’s when the real recovery started." 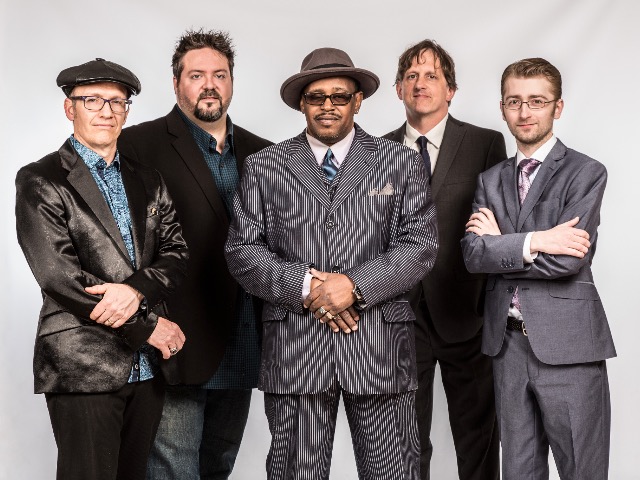 Holman would spend a month in the hospital, finishing up therapy and rehabbing – and as of an appointment earlier this month, he’s still showing no signs of cancer cells, the best possible outcome from the treatment. Now, after months away, he and the rest of Tweed Funk are eager to pick up where they left off, hitting the stage and supporting the critically well-received "Come Together."

"The best part is being back around the guys in the band," Holman said. "They give me a lot of strength. They’re most concerned with my health and how I feel. They wouldn’t force it; they’d drop everything if it came to the point that I thought I was having problems. I’ve been doing this since I was 13 years old, so I’m anxious to get back into it."

"It’s been great," Schoepke added. "We’ve got a new outlook about what we’re doing. Everybody’s obviously very positive and happy that he’s got some relief. If he says, ‘Let’s go; let’s do it,’ then we go; that’s pretty much the attitude. And if he says he can’t, then we don’t. It stops, and we do whatever we need to do. We’re all behind him."

Of course, getting back on one’s feet from such a majorly draining physical and emotional battle, there have been struggles for Holman. He still falls occasionally, and remembering the words to songs after being away for so long is a challenge – especially when the necessary medicine can sometimes make the singer feel "loopy," his memory hard to retain.

"It’s just going to take time, just like anything else, for him to get comfortable," Schoepke said. "Seven months away is a long time – especially when you’ve been dealing with what he’s been dealing with."

"I’m coming back slowly but surely," Holman added. "I hadn’t been singing, and you have to be constantly singing to hit a lot of notes and what not. But I’m a solider. Sometimes I feel a little reluctant because it’s been so long. But I’ve got people that depend on me, so I charge ahead."

He’s charging through his recovery as well, a process that’s very much still in progress. He’s building the strength back up in his legs and upper body, a challenge since, Holman said, "it seems like I’ve got no muscle tone." Then, in the middle of April, doctors will take the next step: removing his teeth.

"They’re starting me on medication that helps my bones, but the thing about it is it affects the jaw bone," Holman explained. "The doctors don’t want to have the decision of taking my teeth out and then the holes don’t heal."

According to Holman, it’ll take approximately three weeks for his gums to heal from the surgery, then another six to eight weeks for them to be hard enough to create a set of dentures, and then even more time to learn and adapt to his new teeth.

While the journey is far from over, however, Saturday night’s show at Anodyne – a good venue for Holman’s return, Schoepke noted, thanks to the relaxed freedom of the space and gig requirements – represents at least the first courageous step toward recovery, a soulful opening chord to this long prelude to normalcy. Talking to Holman, it’s clear it's nowhere near the last one either.

"It was a journey, like you went somewhere not knowing the way but you know the direction you’re going in. I guess there’s a message in there about believing in what you do, because a lot of people can give up before they start the race, and when you do that, you lost the race before it even started. I’m not going to do that.

"Step with purpose to your destiny. That’s what I’m going to do: take a full 30-inch step and move on from there."