MillerCoors is rolling out a new beer called Two Hats, which offers a different twist on light beer in hopes of attracting a segment of the population that isn't focused on beer right now. Two Hats, available in two flavors, is a light beer with the addition of natural fruit flavors.

MillerCoors is rolling out a new beer called Two Hats, which offers a different twist on light beer in hopes of attracting a segment of the population that isn’t focused on beer right now, says the company’s Senior Director of Innovation, Sofia Colucci.

Two Hats, available in two flavors, is a light beer with 4.2 percent alcohol by volume – the same as Miller Lite and Coors Light – with the addition of natural fruit flavors.

"Currently only 14 percent of 21- to 24-year-olds feel beer is meant for them, which explains why many are opting for cheap wine and spirits," Colucci says. "Two Hats was created to introduce 21- to 24-year-old drinkers to the beer category.

"With Two Hats, we want to give this new generation of drinkers a reason to choose beer and stick with it for the long haul, and we’re doing that by offering great taste and great price."

Two Hats is available in lime and pineapple.

To the eye, the beer looks like the light beer you're used to seeing. It’s pale straw colored and poured from the can into a glass it has a modest head of foam that dissipates fairly rapidly. 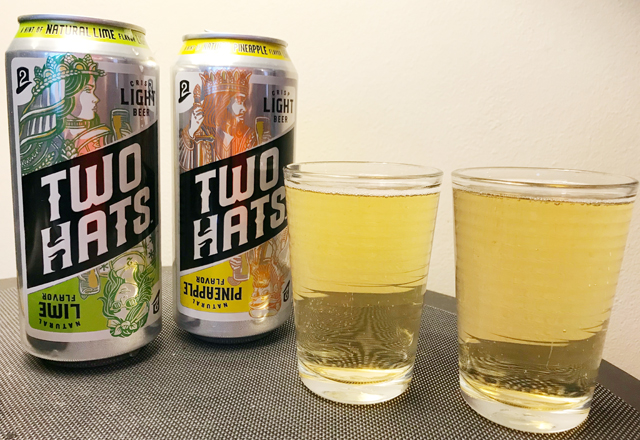 While the fruit flavors are prominent on the nose, they’re not especially forward on the palate.

Colucci says that the light touch in terms of beer and fruit flavors will hit the bull’s eye with its targeted consumer.

"We’re confident that the combination of a light beer profile paired with a hint of familiar fruit flavors like lime and pineapple is a compelling way to reach this group and help them reconsider beer," she says.

According to Colucci, the light beer that is the foundation of Two Hats is not brewed to the same formula as any of the company’s existing light beers, like Miller Lite, Coors Light or High Life Light.

"The process is unique to Two Hats – it strives to strike a balance between the character of a light beer with just a hint of all-natural fruit flavor that can be most noticed on the crisp, clean finish of the beer," she says.

I asked Colucci about how MillerCoors went about researching and developing Two Hats.

"Any time we develop a beer," she says, "there is a significant amount of testing and refinement that goes into the final product. Going into the development of Two Hats, we started with the understanding that some styles of beer can be perceived as heavy, complex and intimidating. So, for 21- to 24-year-olds who don’t have much exposure to this category, we felt a light beer was a great way to introduce them to a beer profile.

"On flavors, lime is the most popular beer flavor among 21- to 24-year-olds, and we know tropical flavors like pineapple are rapidly growing in popularity. Both flavors are refreshing and compliment the profile of a light beer."

There are currently no plans to add other flavors, Colucci says, saying that the company has not ruled out the possibility, either.

Part of the approach to marketing Two Hats is its price point. Six-packs of 16-ounce "tall boy" cans sell for about $5. Four-packs are also available.

"The name and design are a nod to people who wear two hats in their day-to-day life, balancing work and play," Colucci says. "Just like them, our beer balances two equally great qualities – great taste and great price.

"Since there has not been a mainstream beer launch at a low price point in the past 20 years, we want to appeal to this new generation of drinkers with a look that is attention-grabbing, but also conveys the brand’s personality."

If light beer with a shandy-style flavor approach isn’t your cup of tea, Colucci points out that MillerCoors also brews plenty of the beer that the Two Hats target audience might consider more "heavy, complex and intimidating."

"We have a great range of style and flavor offerings across our national and regional craft portfolio," she says, "with brands like Blue Moon, Leinenkugel’s, Revolver, Terrapin, Saint Archer and Hop Valley."