Tales from the road: the arena boss man and the vanishing English muffins

This week's Tales from the Road got Dave Begel in touch with the guy who is in charge of the construction of the new Milwaukee Bucks arena and the sous chef from Watts Tea Room who is soon going to be out of a job.

Being an Uber driver in Milwaukee is a one-of-a-kind experience that let's Dave Begel meet some of the most interesting people, residents as well as visitors, to the city. Everybody has a story, and Tales of the Road will highlight some of those stories. The stories have been edited into quotes from riders. Names have been omitted or changed to preserve the privacy of his passengers.

I picked Chris Miller up at a Downtown hotel, and the address he gave me was a little strange.

"Just go to 4th Street as far as you can, then turn right and then come back to 4th Street; the entrance is there," he said.

I asked what the entrance was for, and he said it was the "new Bucks arena."

Asking him if he worked there, he replied, "I’m in charge of the construction."

What does that mean?

Miller has built a number of facilities including the Sprint Center in Kansas City, the Sports Authority Field at Mile High (home to the Denver Broncos) and Harbor House, a mixed use development that’s home to the NHL's Buffalo Sabres.

Miller is a vice president of ICON Venue Group, and he works out of Charlotte, N. C.

"The Bucks arena is going to be one of the best," Miller said. "I think people are going to love it." 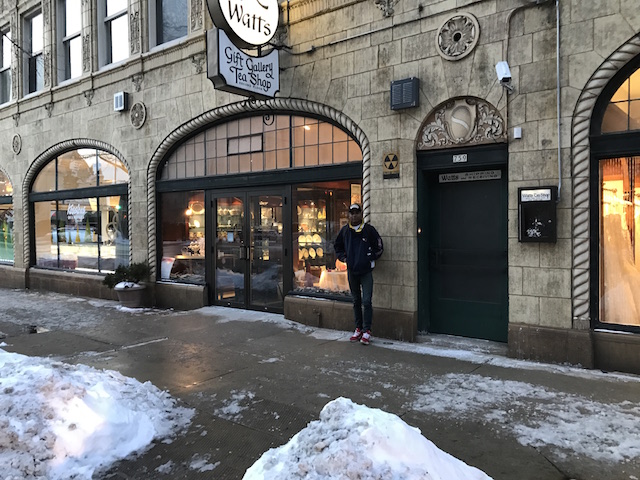 When the George Watts Tea Room closes just after Christmas, it'll mark the end of a 155-year-old tradition for the city – as well as a six-year tradition for Marvin Campbell.

Campbell has been the sous chef at the highbrow tea shop for six years and is saddened by the decision by the Watts family to close the shop.

"It’s too bad," he said during a recent early morning ride to work. "When they made the announcement, almost all the staff left. But the business has been crazy since people found out it’s closing.

"The only kitchen staff left are me and the executive chef (Jason Stevens)."

Since the announcement of the closing was made in November, the restaurant has seen a flood of diners coming in for a last meal.

"We’ve been awfully busy," Campbell said. "If we had been this busy all along, then we’d probably be staying open.

"I know there are people who hope that an angel will come in and keep it open, but I doubt if that’s going to happen. I think this is it."

Campbell is going to drive for Uber after the restaurant closes until he decides what to do.

I asked him if he’d be willing to share any of the classic recipes, like the Sunshine cake, the olive nut sandwiches or the famous homemade English muffins.

"No recipes," he said, laughing. "But we make the dough for the muffins and then let it proof for about an hour. Then we shape them and cook them on a flattop. Six minutes on one side and 18 minutes on the other."

Tales from the Road: Homeless on the day after Christmas

Tales from the Road: An Uber ride for an escort

Tales from the Road: The 10 most popular Uber destinations

Tales of the Road: An Uber driver checks out Downtown drinking zones