Does Wisconsin owe you money?

On a whim, I decided to plug my name into the State of Wisconsin unclaimed property database. It turns out this website is like shooting fish in a barrel, and I want to make sure you get the cash you're owed. Hence, this column.

On a whim, I decided to plug my name into the State of Wisconsin unclaimed property database. I was online late one night, stumbled upon it and thought why not?

I discovered that Google turned over the $58 it owed me to the State. Well, that will fill up my car twice. Not sure why Google owed me money ... but thanks!

It turns out this unclaimed property database is like shooting fish in a barrel, and I want to make sure you get the cash you’re owed. Hence, this column. I started putting in names of relatives, and then friends, and then well-known people and companies.

Turns out everyone – only a slight exaggeration – is owed money by the State of Wisconsin. Even Scott Walker’s campaign! The state Republican and Democratic parties have abandoned property just waiting for them to reclaim it, too.

Try it yourself. When you find out that you, your friends or your relatives are owed a bunch of money, you know where to send the finder’s fee. Just kidding; this one’s on me. Unlike those companies who try to get money off you by informing you that, "You’re owed money!" I’m telling you how to look it up yourself. I’m basically the Bernie Sanders of column writers: I tell you how to get free stuff. Well, in this case, it’s not really free. It’s your property. On second thought, Bernie would probably let the government take it ...

The more I plugged names into the state’s unclaimed property database, the more hilarious the exercise became. For starters, it turns out that the State owes Scott Walker’s campaign money in three different accounts. I thought his campaign was in so much debt that he’s basically begging people to help him pay it off! Governor, you might want to check this out:

What is the unclaimed or abandoned property in the database? According to the State Department of Revenue, it comes from a variety of sources in which there wasn’t activity for a year or more by the owner and the "holder of the asset is not able to contact the owner." Seriously, Westbury Bank can’t figure out how to reach Scott Walker?

The unclaimed or abandoned property law dates to 1970. The Department of Revenue is the one that gets the cash so companies don’t have to report it in their finances. Then the DOR holds it for you.

There is no time limit to get the money. You just have to prove ownership or legal right to it, and you can get it back without paying any fee.

DOR claims it does all sorts of things to reach owners, including advertising in newspapers.

The property can include savings and checking accounts, customer overpayments, refunds, stocks and mutual funds, and so forth.

The DOR also claims it crossmatches "the names of unclaimed property owners with public record information retained by other state and federal agencies."

The Secretary of the Department of Revenue is Richard G. Chandler. Two Richard Chandlers do come up, but it’s a common name so who knows ...

United Healthcare and IBM are among companies that owed the UW unclaimed property now held by the State. In fairness, some of the accounts are worth peanuts. But hey, when you’re letting ad hocs go and pleading poverty, every penny counts. Here’s a section of that: 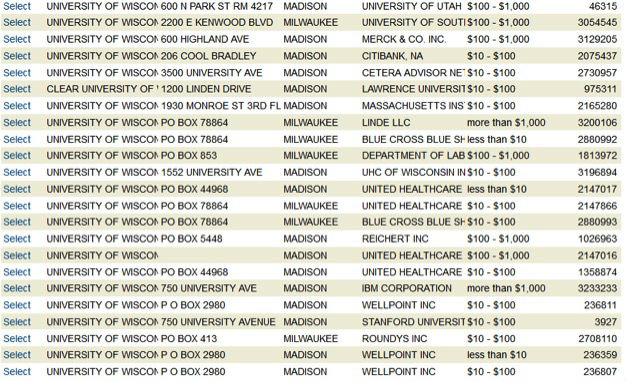 I found my sister in this database. I found my cousin and my aunt as well. I found two close friends – one owed between $100-$1,000! Trust me, EVERYONE is in this (almost everyone, anyway). Talk show host Charlie Sykes has abandoned property being held by the state too (News Corporation owes him money). State Rep. Joel Kleefisch is in there. It goes on and on and on.

I even found my editor, Andy Tarnoff of OnMilwaukee (he didn’t think he’d get left out of this column, now did he?).

He’s listed as being owed money from some animal health thing. Not sure what that’s about. Unfortunately, for Andy, he’s owed under $10. It’s sort of nice to be owed money, not to owe it, to the state, now that I think about it.

OnMilwaukee is owed money, too. So is the Journal Sentinel. WTMJ is owed money from Turner Broadcasting. And so forth. Even rich people like the now deceased Harry Quadracci are owed money.

It doesn’t seem like the state is doing much to let people know they are owed money. How hard is it to track down the Journal Sentinel? C’mon!

Russ Feingold and Gwen Moore show up too.

That Aspen Commons address comes up as being listed to the Senator on political sites. The 25th St. address below is listed on Democratic Party websites for Congresswoman Moore, who is owed money by Best Buy.

I have a feeling a lot of people will thank me for this column.

Fake money on the move in Milwaukee