The Deer District is red hot and it shows no signs of letting up anytime soon. In fact, the flames are being fed by the addition of - not only one - but two new additions, both of which open this weekend.

The Deer District is red hot and it shows no signs of letting up anytime soon. In fact, the flames are being fed by the addition of – not only one – but two new additions, both of which open this weekend.

Uncle Buck’s and Red Star, two distinctive concepts under one roof, are preparing for their public debut on Saturday, Sept. 7 beginning at 6 p.m.

The new venues are located 1125 N. Old World 3rd St., adjacent to the Fiserv Forum and entertainment block and an arm’s distance from its popular Beer Garden. And they were brought to life through the collective visions of entrepreneurs Michael Vitucci and Nathan Harris, two local business owners whose goals include making Milwaukee a more creative, welcoming and invigorating place to live and work.

Vitucci says both venues will debut first as bars, with menus for both locations due in the next week or two. 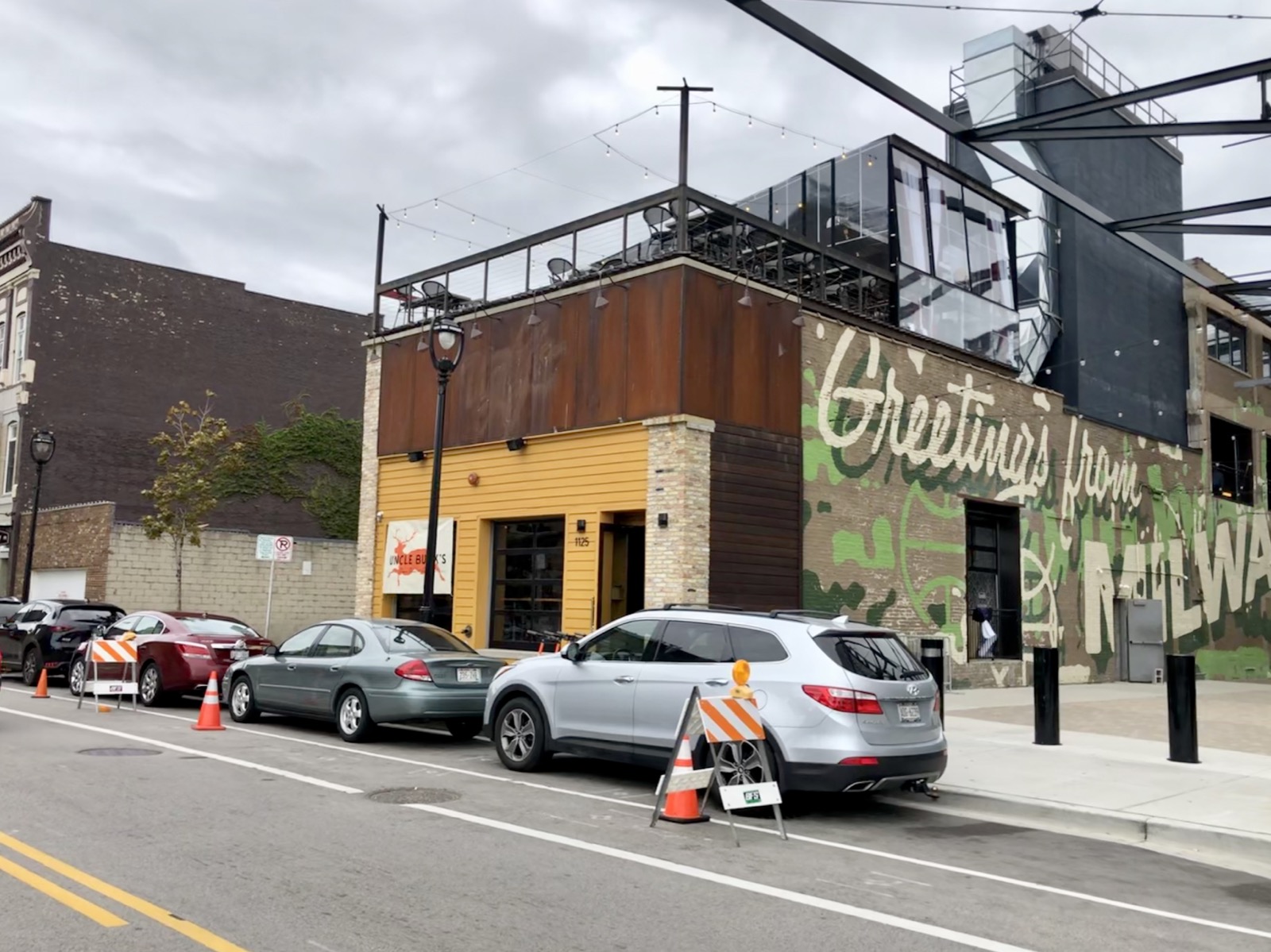 The building’s lower level is home to Uncle Buck's, a bar and restaurant that’s been created to appeal to a diverse audience from craft beer geeks to young professionals and families looking to enjoy the energetic vibe of the Deer District.

Grab a seat at the bar and you’ll find cocktails, wine, cider and hard seltzer, along with 24 rotating craft brews, a list curated with the help of Kelly Burns, bar manager at Izzy Hops, another of Vitucci’s properties.

"Our list will change often enough that people are likely to see a handful of new selections every week," notes Burns. "And there will be something for everyone, from wacky sours and fruity, botanical beers to barrel aged stouts and IPAs." 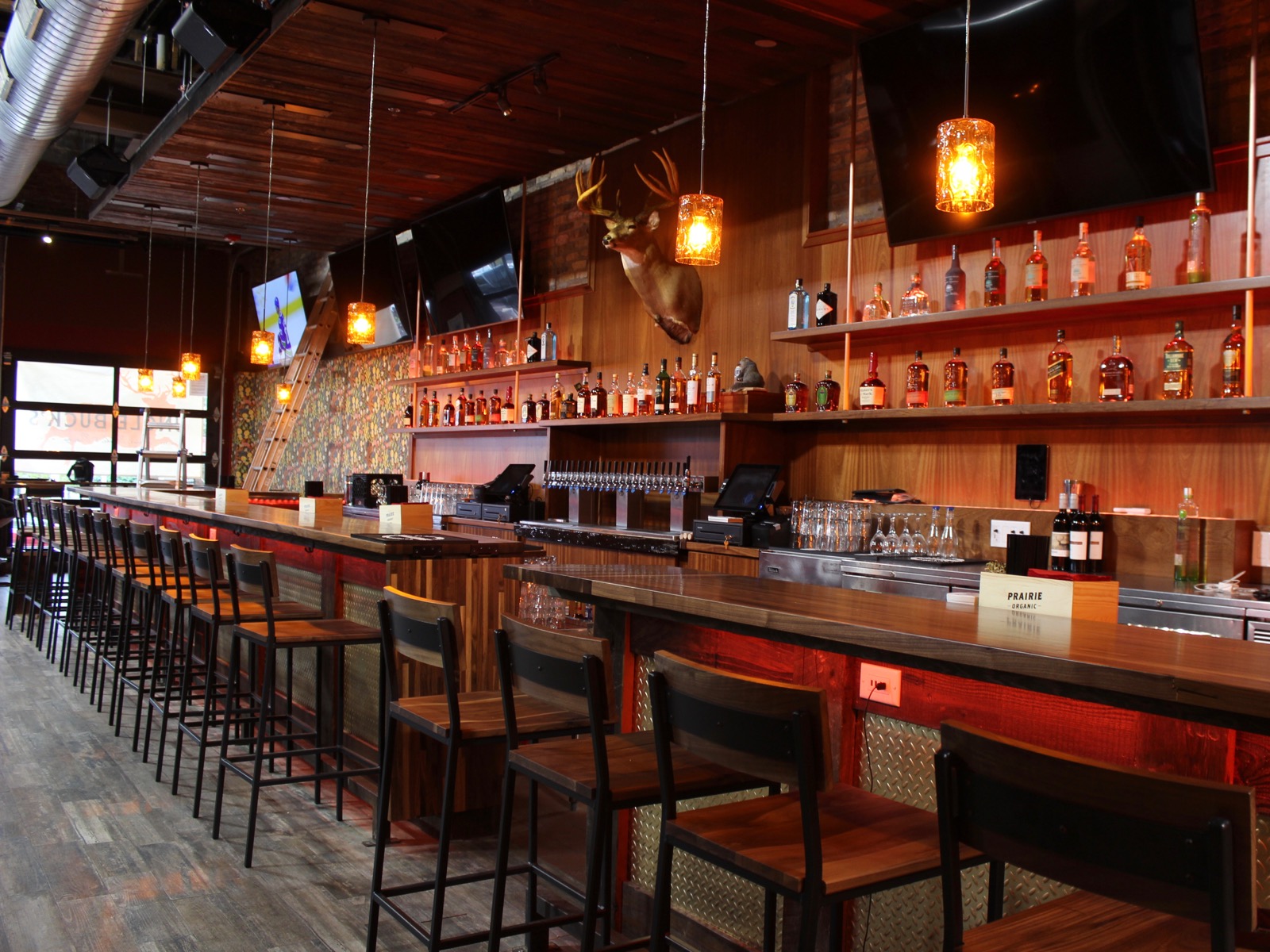 The venue, which boasts a Northwoods vibe with a distinctly modern flair showcases a wide range of design elements masterfully woven together by interior designer Jamie Fink, who Vitucci credits with bringing their vision to life.

Throughout the space, guests will find taxidermied animals, antler-studded chandeliers and deer-themed artwork, as well as myriad details from complementary colors and textures to strategically placed LED lighting which transforms the space from a venue for dinner and drinks to a fully activated night life spot complete with DJs on Thursday, Friday and Saturday nights. 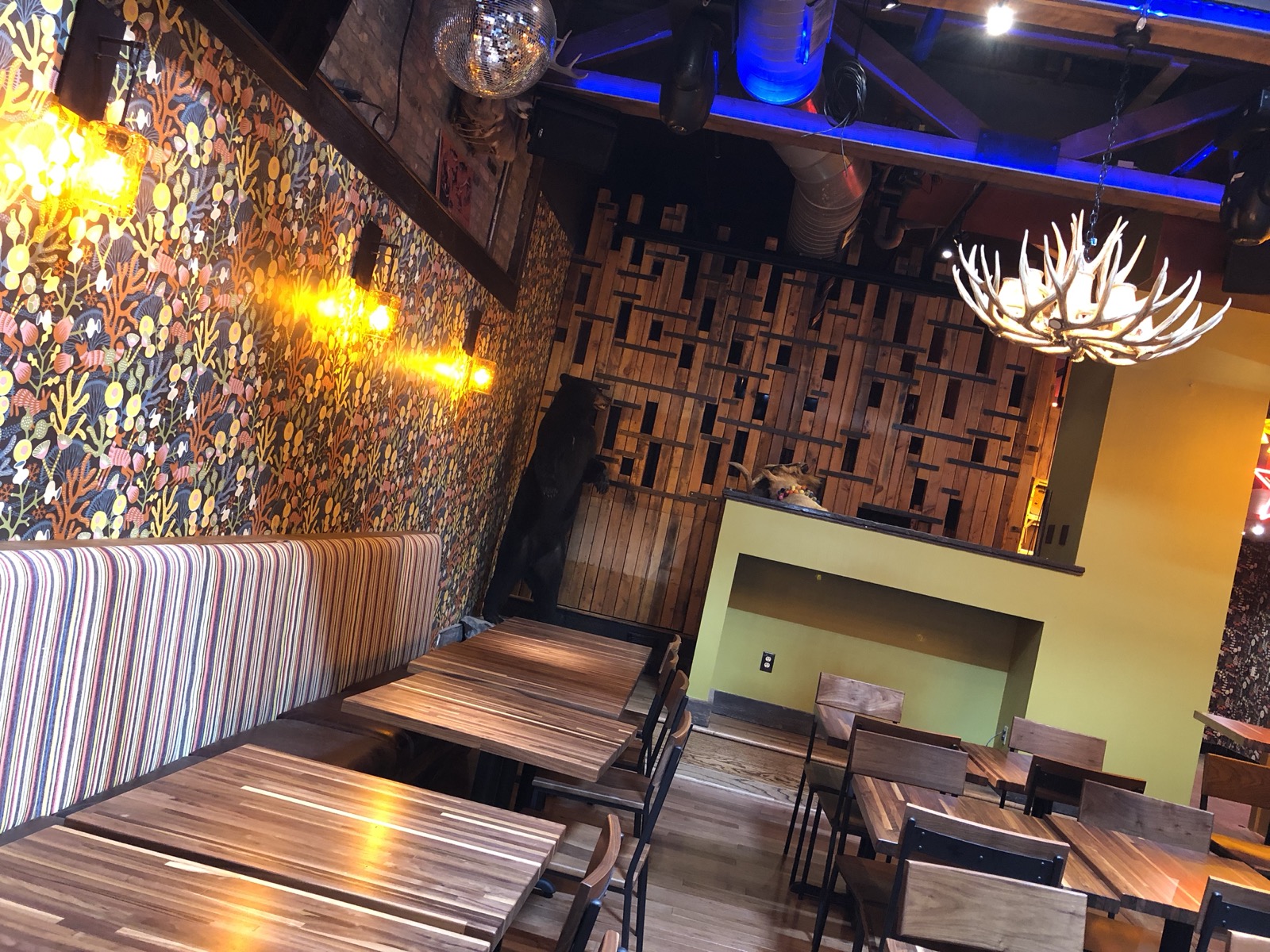 "We’re capturing both the cool factor and the comfort factor," Vitucci says of the space. "We also wanted to underscore the architecture of the building."

Those historical details are captured in various elements from visible ceiling trusses to peeks of cream city brick repurposed from the former Allis-Chalmers. Those elements co-exist amid a collection of whimsical wall-coverings, striped upholstery and accent colors in hues of yellow-green, blue and red. 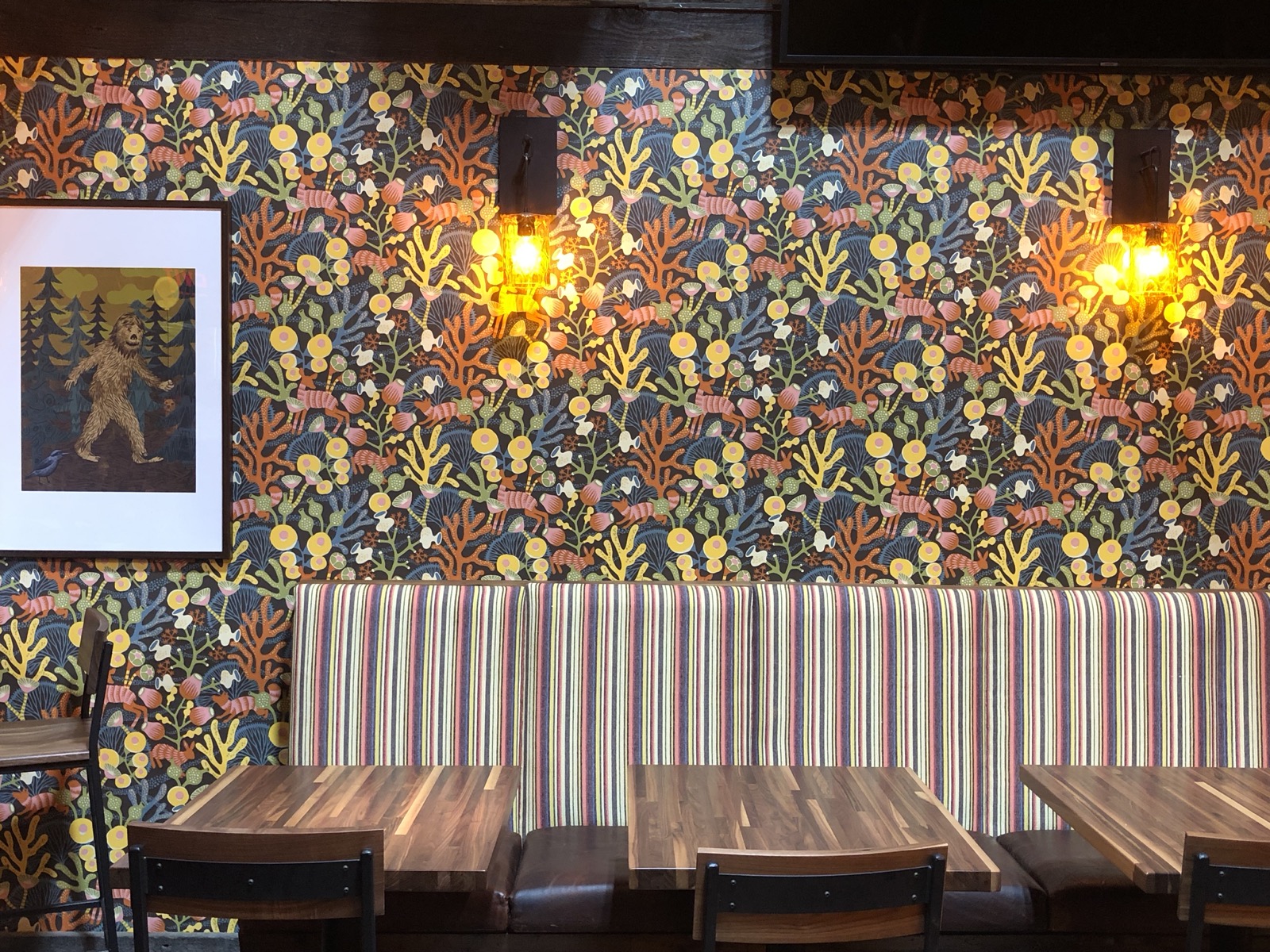 Taxidermied items are on loan from Don Rich, owner of Nature’s Touch Taxidermy out of Janesville. Pieces include his prized 13-point buck, which hangs majestically above the 24-seat bar. 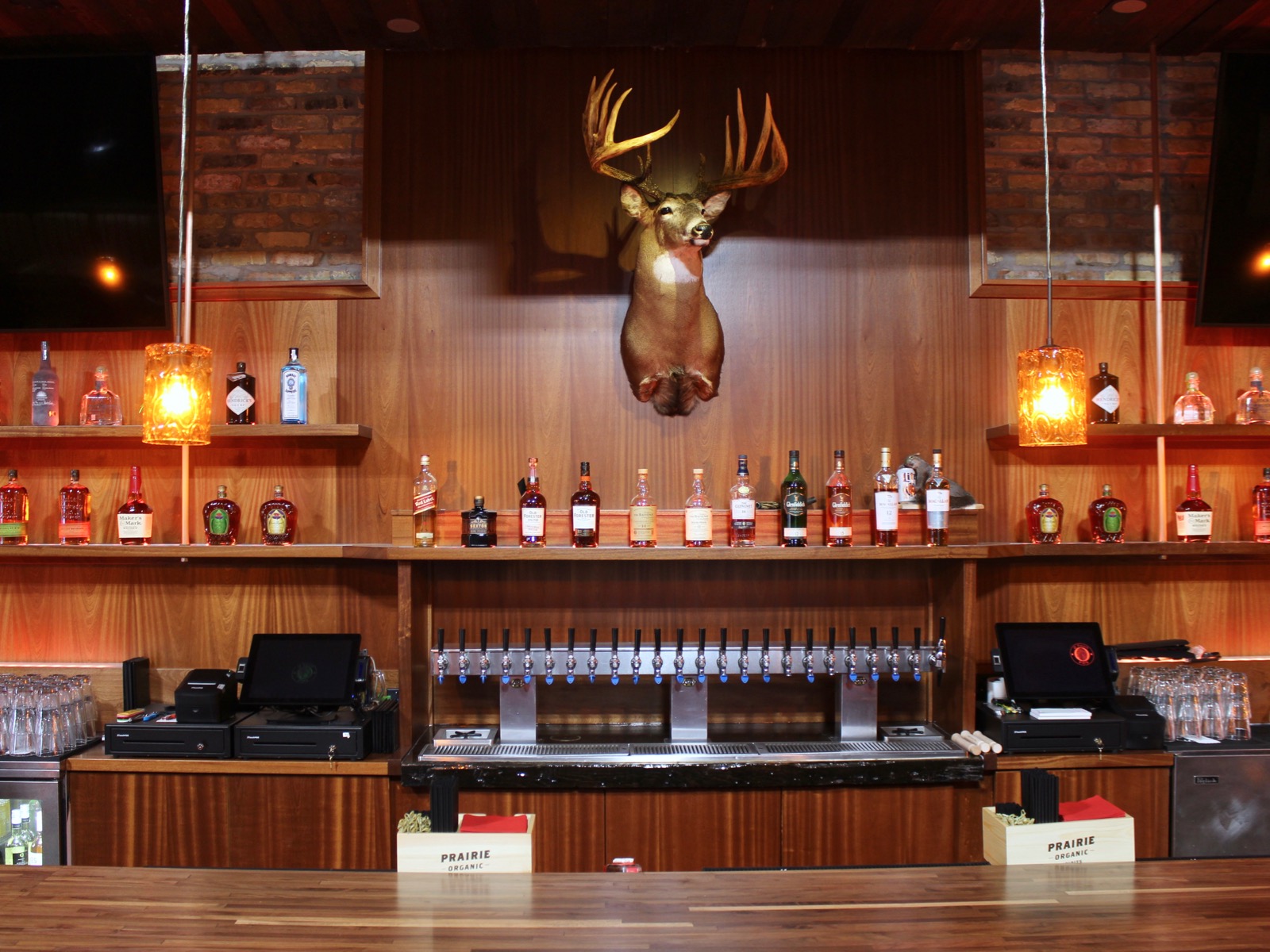 Other pieces include a majestic moose, a festive antelope, a bear posing on his hind legs and what we can only assume is a toodled squirrel resting his weary head on the top of a can of Miller Lite. 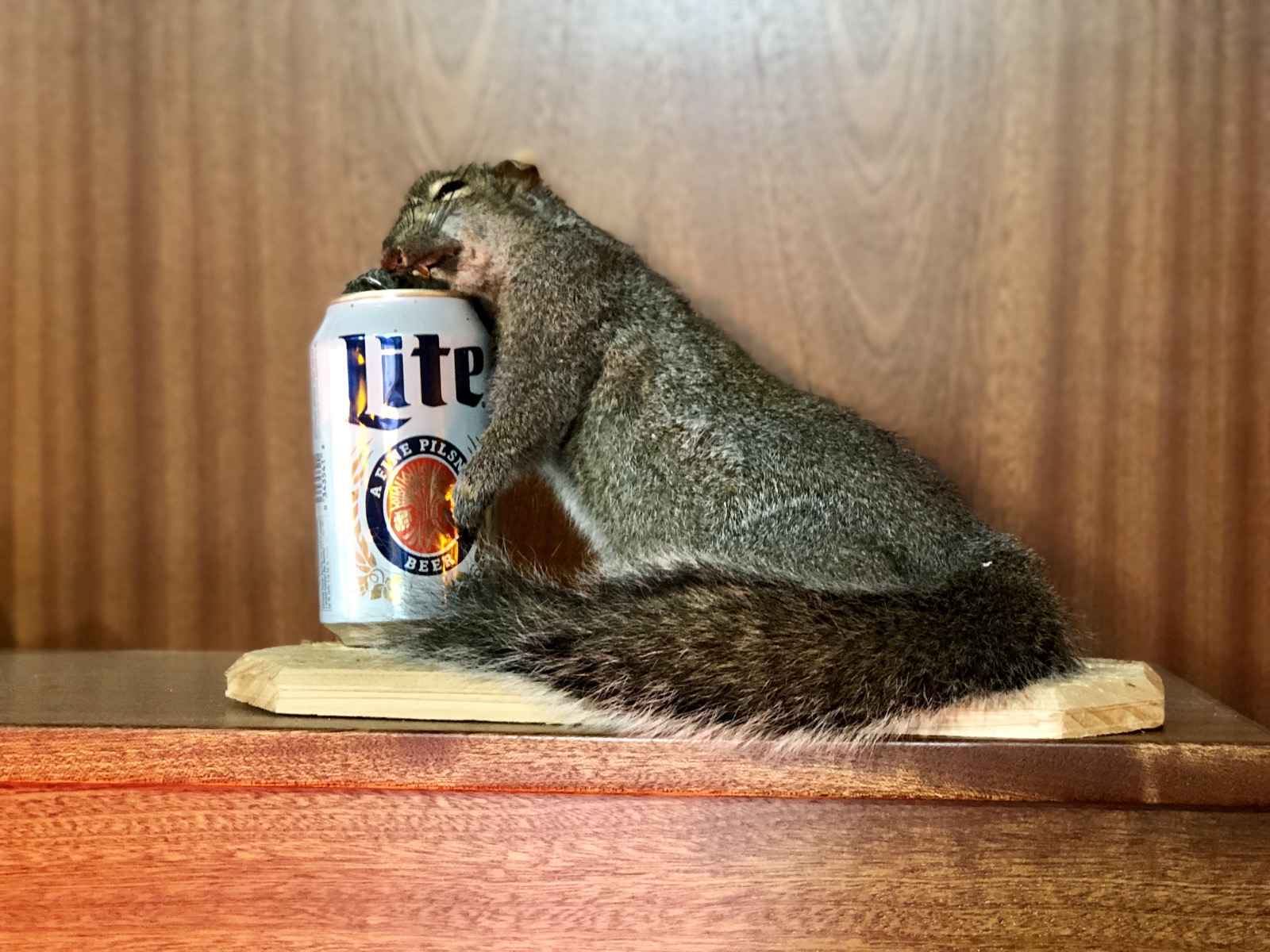 Not only are his works of animal art evident in the space, but Rich's very visage is portrayed on the restaurant’s north wall as part of a Northwoods themed Miller High Life campaign in which he was featured. 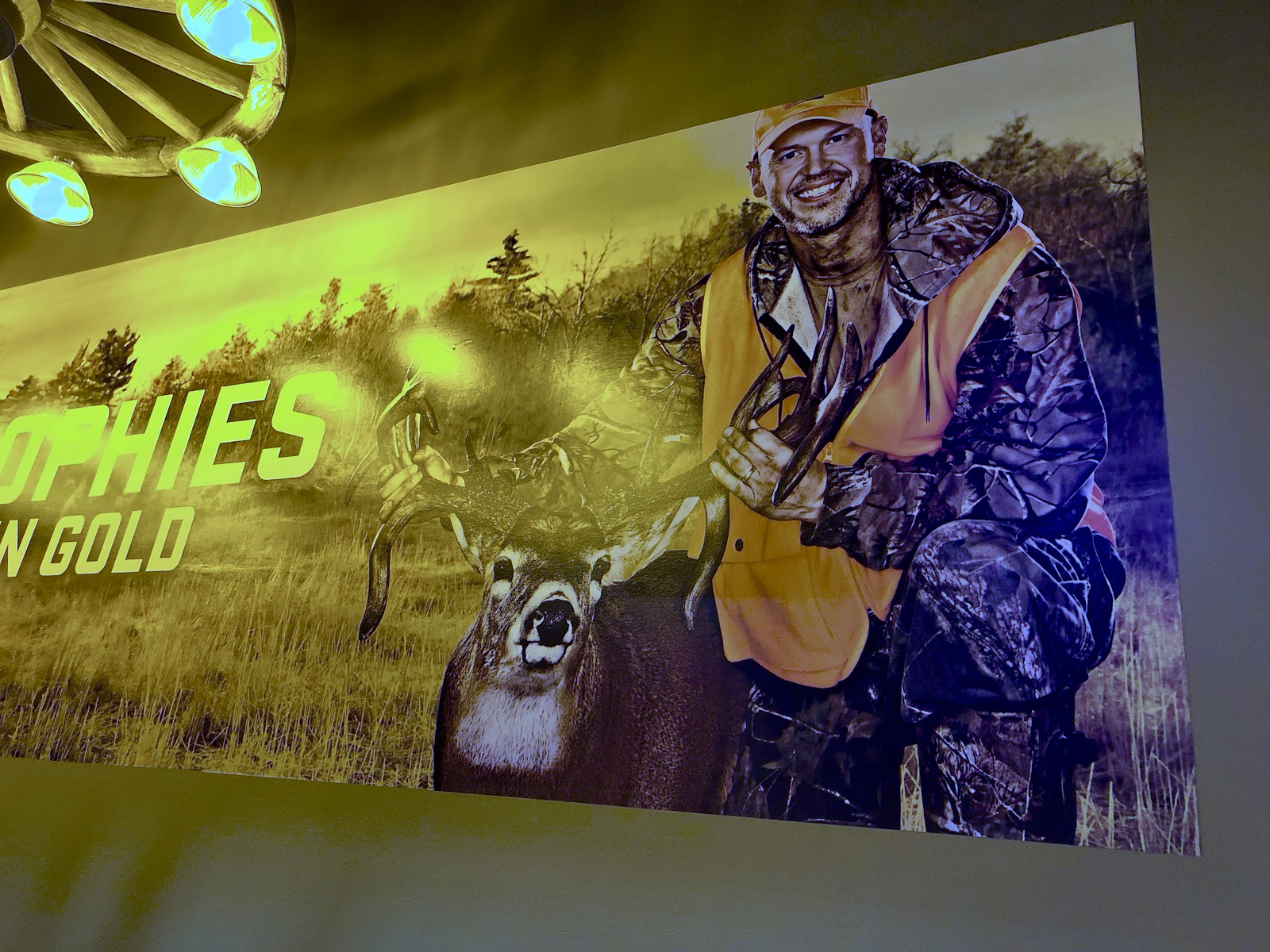 Head towards the rear of the restaurant and you’ll find a family friendly game room featuring whimsical wall-covering, a bubble-blowing moose and arcade games for kids of all ages. 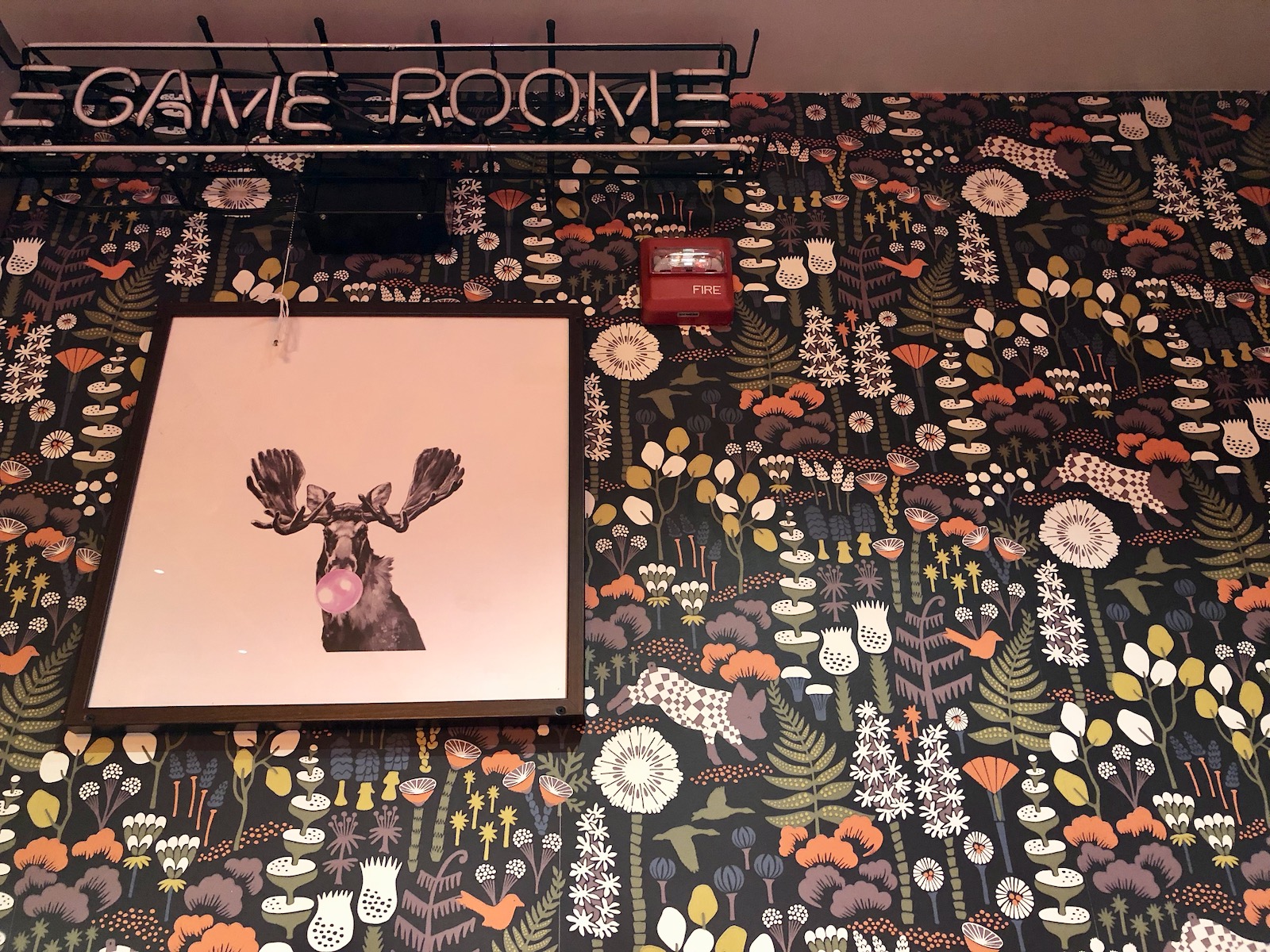 Meanwhile, there’s also a semi-private dining room which can accommodate groups of 20-25.

While Uncle Buck’s could be described as a young, fun East Coast hipster with a modern style and a penchant for Northwoods kitsch, Red Star is distinctly more mature and refined and offering a menu of well-orchestrated craft cocktails and a menu of higher end nibbles.

You’ll find the entrance on the north side of the building. The door is neatly camouflaged beneath the Greetings from Milwaukee mural; but its location is easy to spot once you catch a glimpse of the Red Star logo, a visible element to flag those "in the know" about the bespoke venue. 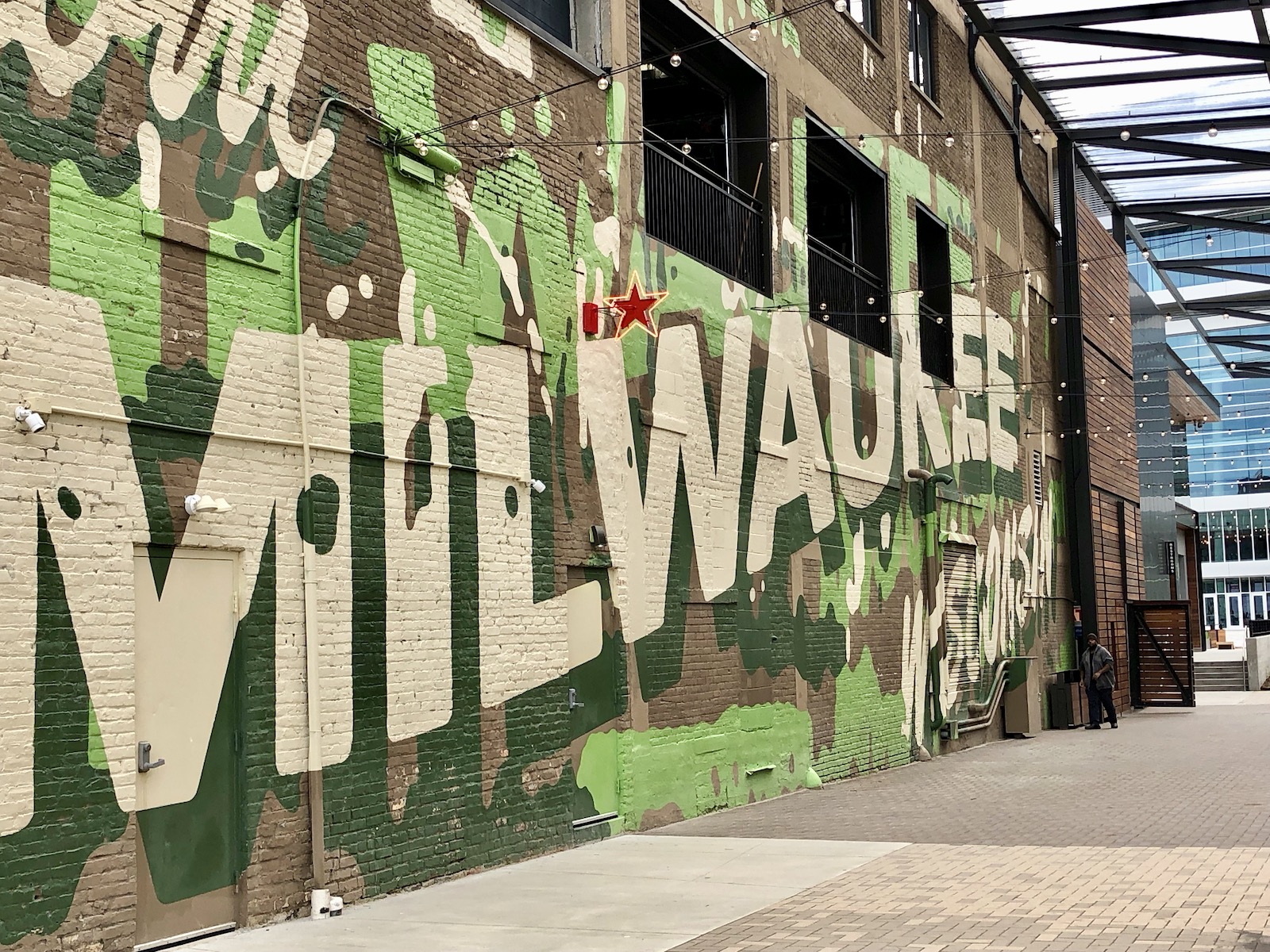 From there, you’ll head up the venue’s cement staircase which features a galactic-inspired mural created by local artist Taylor Fiester.

The art combines planetary elements with playful phrases like "Ground Control to Major Milwaukee," "Beam me up, Bro!" and "Make room, I gotta dance." The images are enhanced by LED lights which play off of the paint colors to create an interactive, innately Instagrammable experience. 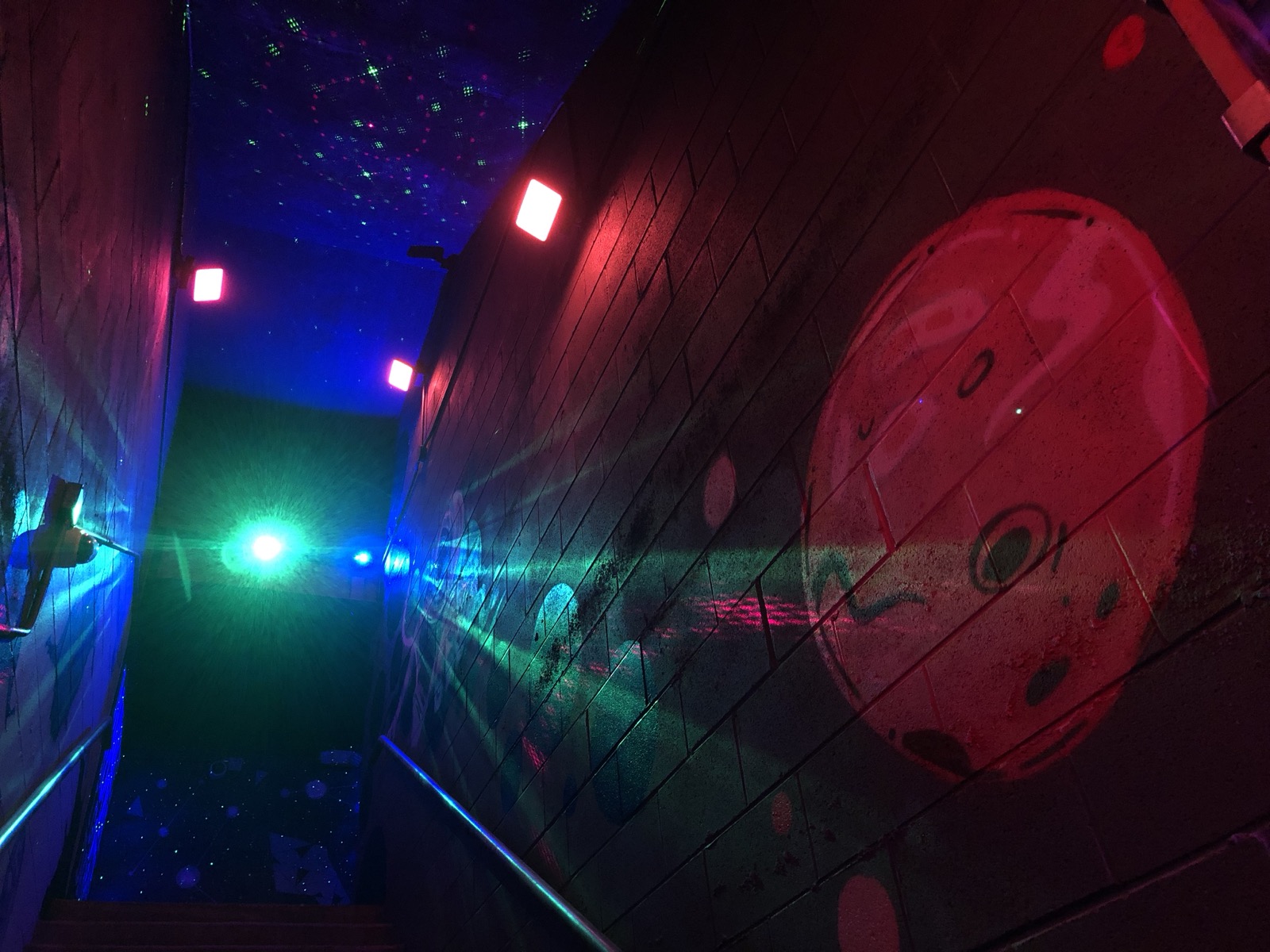 Once upstairs, guests will be privy to two experiences. The first stop is an area called Sport Club, a lounge-like environment with garage door style windows with a bird’s eye view of the Beer Garden – and all of its big screen glory – below. 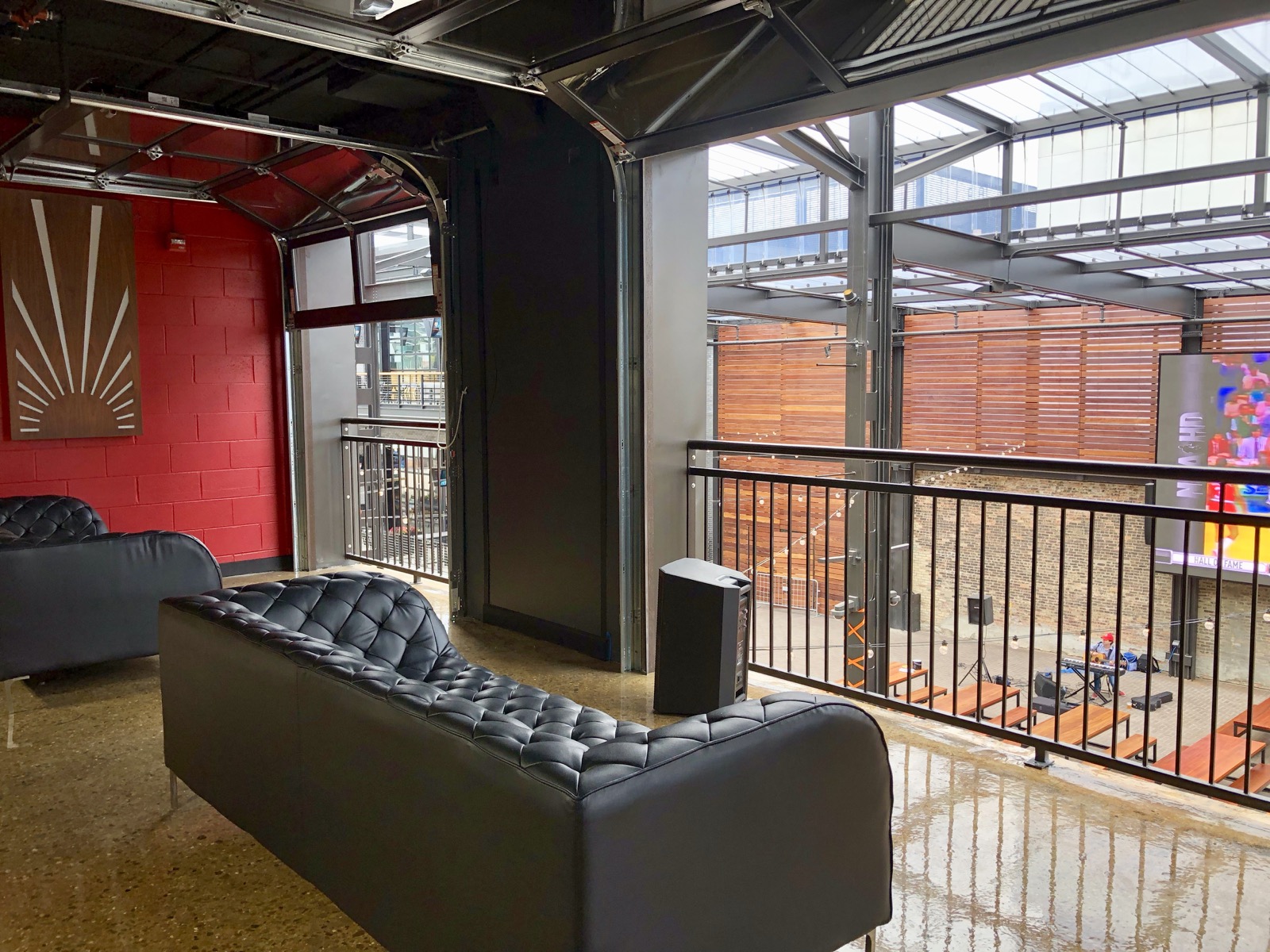 Venture up one more flight of stairs to the east, and you’ll discover the rooftop, an equally compelling venue featuring a glassed-in bar with a rooftop feel and an adjoining rooftop patio.

The space, which is decorated with velvet curtains and star-themed fixtures also showcases communal wooden tables, beautiful views of 3rd Street and a glimpse of the entertainment block. 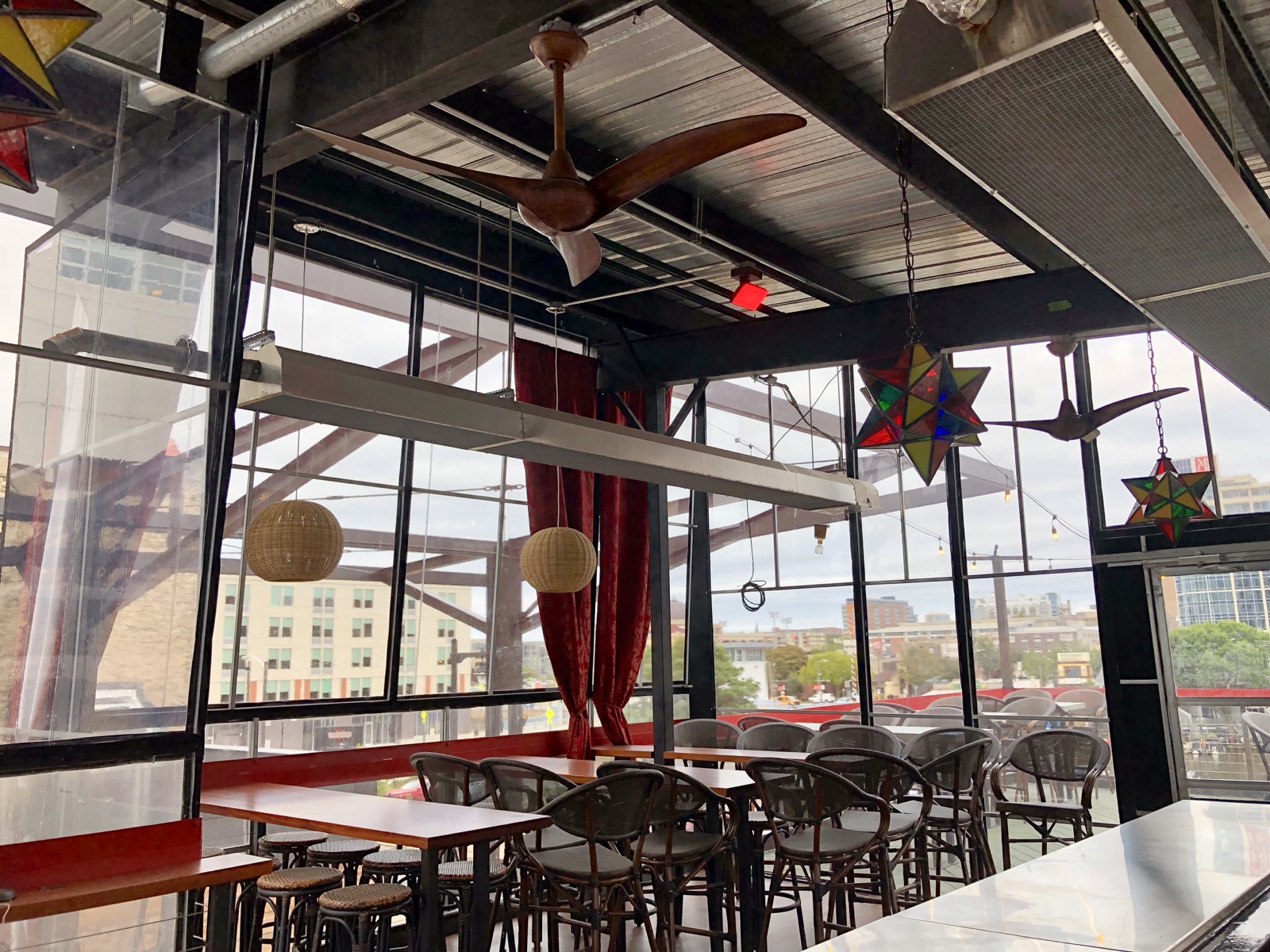 "It’s a great spot for groups to gather," says Harris. "But it would also be a great destination for a romantic evening."

Meanwhile, the rooftop patio offers more of the same, along with deck-style seating, festoon lights and (very soon) an impressive gas powered "fire bar," which will accommodate up to 25 people. For now, the patio’s current gas fire pit will keep things cozy on cooler nights. 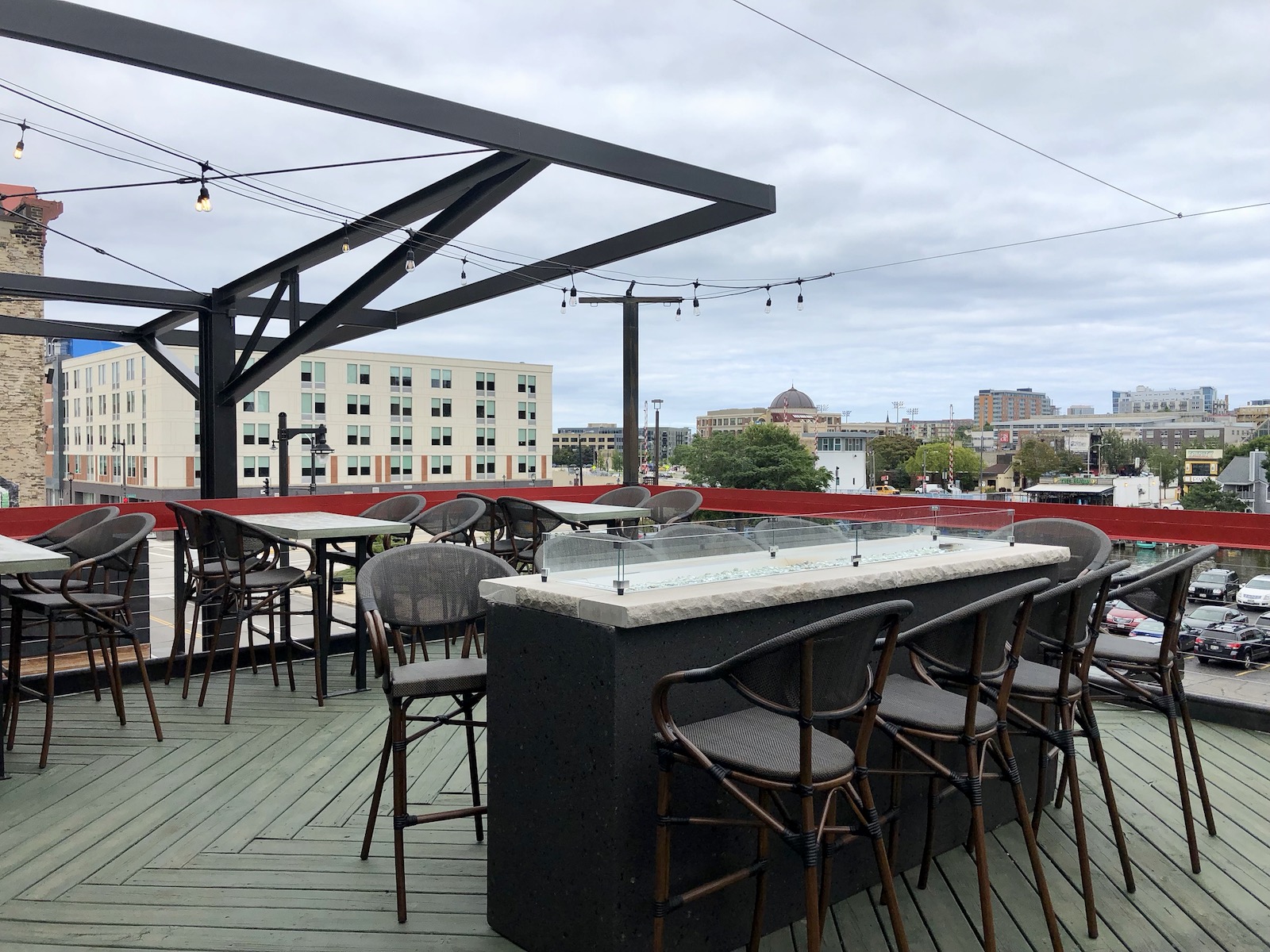 "Ultimately, what Red Star will offer is an upscale experience on Old World Third that still has a high energy feel," says Harris.

Food menus for both Uncle Buck’s and Red Star are still forthcoming, but will feature dishes created by Executive Chef Ben Crevensten.

It’s also a reference to the restaurant’s sourcing, which will capitalize on locally grown and produced products whenever possible.

"The goal is to offer a from-scratch menu in an area where that’s the exception rather than the rule," says Crevensten. "That means making our own sauces, from dressings and salsas to barbecue sauces. We’re hand-cutting, blanching and double-frying our French fries. And we’re hand-breading chicken and fish."

The menu for Red Star will follow a similar approach; but it will reflect the higher end look and feel of the space with creative shared plates and elevated bar snacks.

Watch for more information on the food offerings as they become available.