Put an egg on it: Tasty things await at Uncle Wolfie's Breakfast Tavern

Earlier this week, we gave you a preview of the (beautiful) interior at Uncle Wolfie's Breakfast Tavern. But there's more where that came from. After all, it's only fair we give you something to drool over until the restaurant officially opens its doors on Monday, Dec. 17.

Earlier this week, we gave you a preview of the (beautiful) interior at Uncle Wolfie’s Breakfast Tavern, the forthcoming breakfast, brunch and lunch spot at 234 E. Vine St. in Brewers Hill.

But there’s more where that came from. After all, it’s only fair we give you something to drool over until the restaurant officially opens its doors on Monday, Dec. 17.

The menu at the restaurant was developed by owner Wolfgang Schaefer with the assistance of Chef Joe Singer, whose resume includes Bass Bay Brewhouse and restaurants including Blue's Egg and Maxie's.

"It’s a nice mix of familiar things and things that are a little bit different," notes Singer. "So there's really something for everyone. Our goal is to have fun with stuff and not take it too seriously and we also want people to stick their necks out a little bit and try something new."

That’s true of not only the breakfast and lunch menus, but also the drink menu which includes a combination of beer (a selection of bottles and cans from Rhinelander shorties and Miller Lite to Good City Motto and Company Brewing RePorter), cider and soft drinks along with a variety of cocktails, some incorporating coffee and tea. 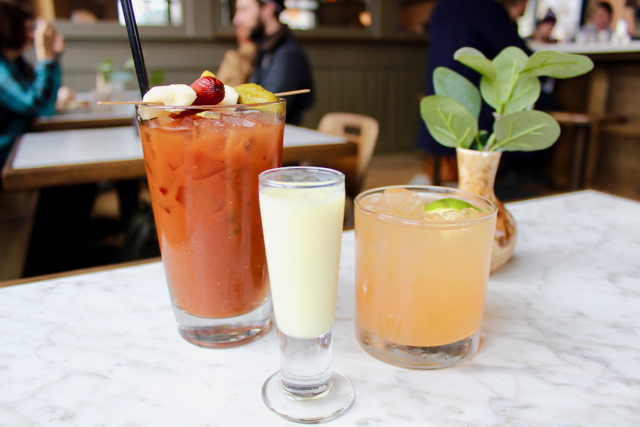 Among the list of house cocktails are staples like a bloody mary ($10, pictured) and Mimosa ($8). But there are also a variety of simple, yet creative options including the Groggy Mick featuring rum, tequila and grapefruit ($8, pictured); a hibiscus negroni ($8); the Wolf Paw featuring bourbon, cider and ginger ($8) and the a delightfully bright (and dangerously smooth) limoncello creme created from a family recipe gleaned from friends in Italy that's become a traditional tipple at Schaefer family gatherings ($7, pictured).

As for coffee, well you can get a cup of batch-brewed house coffee or opt for an aero-press pour-over. There’s also a full menu of coffee drinks, from espresso and cortados to cappucinos and macchiatos ($2.25 to $4).

Of course, the drinks only make up a portion of the menu, which also includes over 20 options for breakfast, lunch or brunch including staples like eggs benedict ($10), Johnny cakes with whipped butter and syrup ($8.50) or a la carte breakfast staples including eggs, bacon, breakfast sausage, biscuits, and oatmeal ($2.50-$4.50). 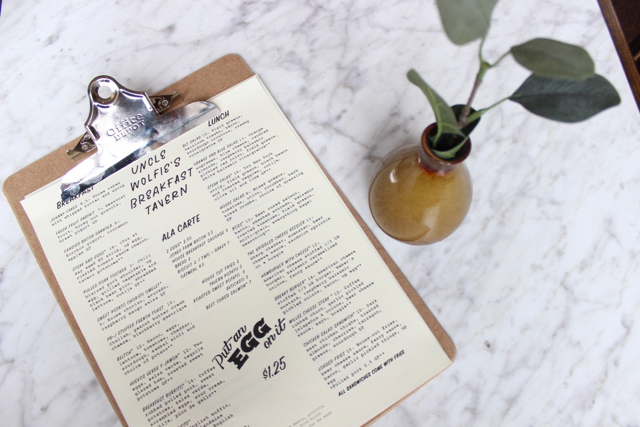 Many of the more creative offerings are a product of what Schaefer calls "R&D Tuesdays," weekly cooking jams during which Whitney, Wolfgang and Joe [Singer] (and sometimes a motley collection of other cohorts) would brainstorm, collaborate and tweak recipes for the restaurant.

"We goofed off and we made food," says Schaefer. "It was fun. But it also allowed us to hone in on the visual, tactile and taste elements that we were going for with individual dishes. Some things were calculated, but there was also a lot of dart throwing. Nothing is off the table for us."

Take for instance the sweet potato chorizo omelette, which began as a way to use up Thanksgiving leftovers and evolved into a dish where mashed sweet potatoes are incorporated directly into the whipped eggs of the omelette, providing both unique flavor and texture to a traditional breakfast offering. From there, the omelette is stuffed with avocado and chorizo and topped with raspberry mango salsa ($9); or the huevos verde y jamon, riff on huevos rancheros featuring tequila-glazed ham, eggs, cotija cheese and salsa verde with roasted sweet potatoes ($12).

There’s also the restaurant’s flagship sandwich, the BELTCH, a sandwich that co-owner Wolfgang Schaefer credits with giving him the confidence to open his own restaurant. The simple creation features toasted sourdough filled with bacon, eggs, lettuce, tomatoes, cheddar and sambal aioli with the diner’s choice of potatoes (fries, tavern potatoes or roasted sweet potatoes) for $12. 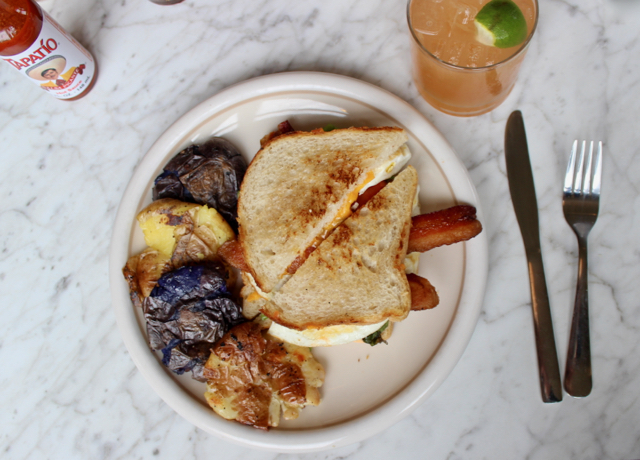 On the sweeter side of breakfast, there’s the PB&J stuffed French toast featuring challah filled with peanut butter cream cheese and topped with blackberry gastrique ($10); and candied bacon granola served with bourbon yogurt and cinnamon apples ($9).

On the lunch side, you’ll find the Orange and Blue Salad (named for co-owner Whitney Schaefer’s adjoining homegoods boutique). "It’s a take on a salad my mom used to make with mandarin oranges, almonds and ramen noodles," says Singer, noting that the current rendition – featuring orange supremes, blue cheese, candied almonds, raspberry balsamic onions and white balsamic vinaigrette – only vaguely resembles its inspiration. The salad is $11 and joins a collection of other salads including a BLT salad, steak salad and house salad, all priced in the $9-15 range). 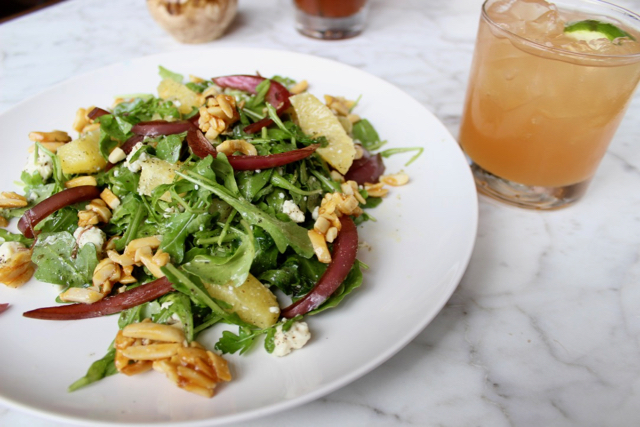 It’s tough to beat all that cheese; however, brilliantly colored beet-cured salmon is the star of the BCSS – a riff on gravlax – featuring bacon, smashed avocado, balsamic roasted tomatoes and greens on multi-grain bread with everything" bagel seasoning ($13)

"I’m really over the prepackaged cured salmon that you can find everywhere," notes Singer. "Plus, it’s so beautiful; the salmon takes on a purple-ish hue from the beets, which also contribute naturally occurring nitrates to the curing process." 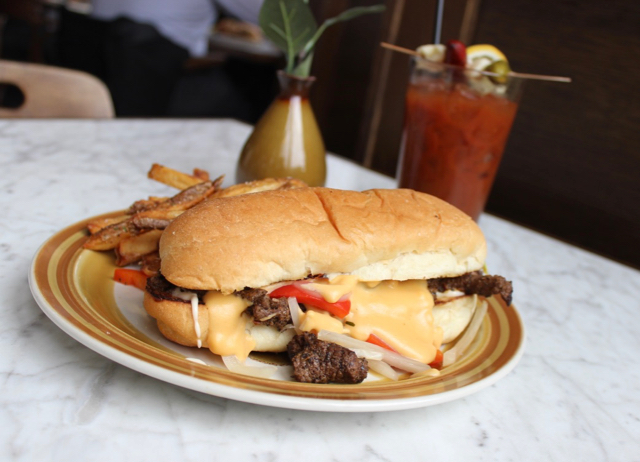 And yes, there are burgers, including the Breaky Burger, a Juicy Lucy style American cheese stuffed ⅓-pounder topped with Weber’s mustard, raspberry balsamic onions, bacon and an up egg ($14).

"Everyone’s got one," says Singer. "But this is really different thanks to two ingredients: the Weber’s mustard; raspberry balsamic pickled onions. You get this wave of sweet and savory and the salty, crispy bacon … it’s just so good."

Uncle Wolfie’s Breakfast Tavern opens Monday, Dec. 17. Hours are Monday through Friday from 7 a.m. to 3 p.m. and Saturday and Sunday from 8 a.m. to 3 p.m.