Uncle Wolfie's Breakfast Tavern, a venue featuring creative breakfast and lunch dishes with cocktails to match, is the dream of husband and wife team Wolfgang and Whitney Schaefer, whose vision for a casual restaurant where a love for food - and sharing meals with friends - is paramount.

It’s nearly time to get a taste of Uncle Wolfie’s Breakfast Tavern, the highly anticipated restaurant and bar located at 234 E. Vine St. in Brewers Hill. In fact, the new venue is due to open its doors to the public on Monday, Dec. 17.

The restaurant, which offers creative breakfast and lunch dishes with cocktails to match, is the dream of husband and wife team Wolfgang and Whitney Shaefer, whose vision for a casual restaurant where a love for food – and sharing meals with friends – began over a decade ago.

The vision for Wolfie's as a concept may have been birthed years ago, but it wasn't until 2015 when the Schaefers purchased the historic Miller Brewing Company tied house from longtime owner and former MPS school teacher Robert L. Crawford, that the restaurant began taking shape. 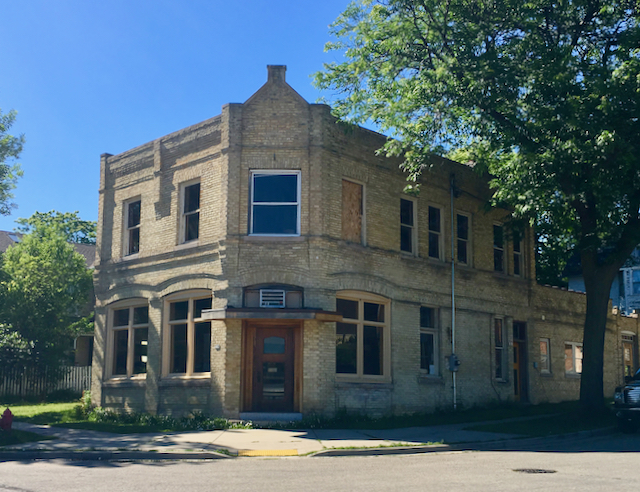 Their first goal was the conversion of the building's second floor into a residence for their family. From there, they focused on the retail aspect of the business, opening Orange and Blue Co., a boutique home decor outlet that offers a curated mix of vintage and modern home goods and accessories.

The restaurant will mark both the third phase of development and the completion of the renewal of the property, which was vacant for nearly 40 years.

To achieve the look and feel they wanted, the Schaefers looked to the expertise of 360 Degrees, a design and build firm which has worked with numerous restaurants across the city including Fauntleroy, Dandan and Char’d. 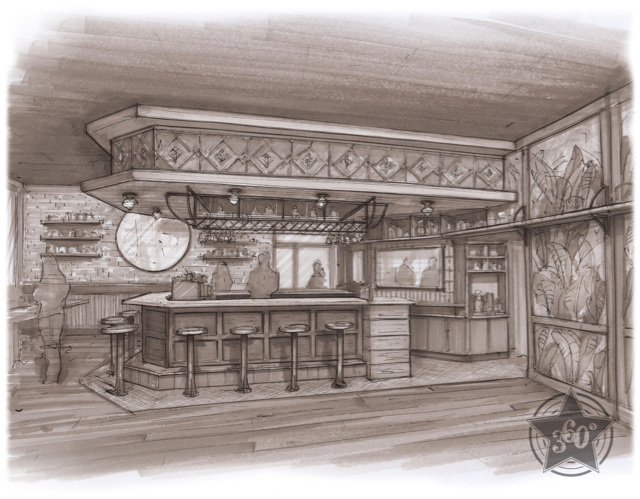 "We’ve always admired their work," says Whitney, noting that she’s been friends with 360 designer Josh Oakes since the two attended college together. "We knew we wanted to do a lot of the sourcing for the design of the space ourselves. But we also wanted elements that were really well built – like the bar and the tables – and we needed someone to really assist us in designing a space that met our needs while being functional and compliant with city regulations."

It was a task that required a good deal of collaboration.

"Our job was really to come in and pull together a look and feel that created an appropriate canvas for some of the things they wanted to do in terms of an aesthetic, " notes Ryan Foat, 360 Degrees project manager. "This was truly a ‘from scratch’ project. When we started, the basement was practically a root cellar; it was not a prep kitchen… and there was no HVAC installed.

"So we needed to do a lot of different things to really bring the element of modern hospitality to the space. We were also cognizant of the fact that the focus of this space would be on both the coffee and the food coming out of the kitchen. In some ways, the space told us what it needed to be." 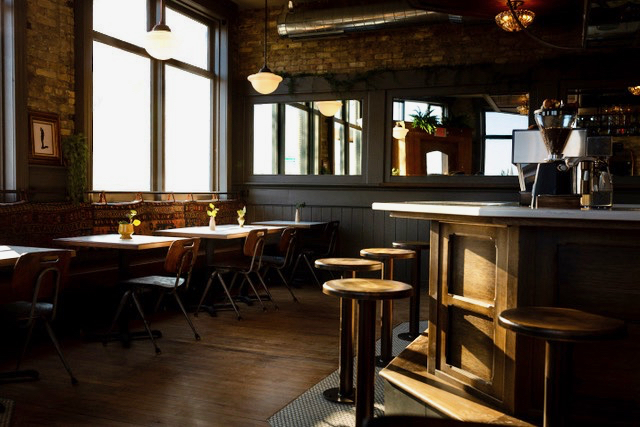 In kind, the history of the space became a backdrop for the design.

"Since it was built to be a tied house, the focal point of the space has always been on the bar," notes Foat. "And they told us they really wanted the bar to look like it had always been there. So we really worked with that. In fact, the current bar -- which we built -- has approximately the same footprint as the original. We also focused on creating a look and feel that was appropriate to something which had been here for such a long time."

And a nod to the building’s history appears in a variety of elements, from the light fixtures which hang above the bar, to the penny tile rug that wraps around the foot of the bar.

Among repurposed elements you'll find original hardwood flooring, original wainscoting and tiles from the building's tin ceiling, painstakingly restored by Wolfgang and mounted by 360 Degrees on the soffit above the bar.

"You can imagine being here 80 years ago and looking at the view – which was so different than it is now – and really contemplating life and the world," says Foat as he sits at the bar. "Places like this have real staying power in neighborhoods because they’re so hospitable and they really feel like an extension of home."

The quartz-topped bar – surrounded by 14 stationary stools –  is the focal point for the restaurant, which seats a total of 40 guests, 26 at banquette-style seating on both the east and south walls. 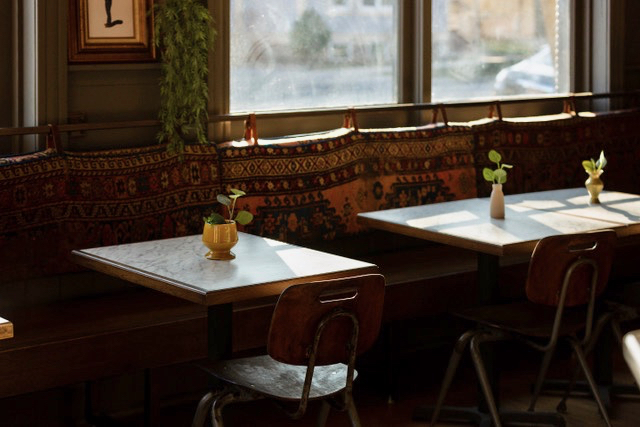 The space itself sports an eclectic bohemian vibe with a palette comprised of warm yellows and cooler greys, both of which draw color inspiration from the tones in the Cream City brick walls. 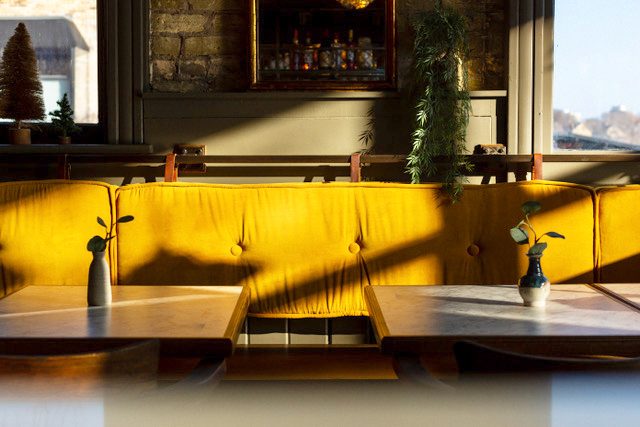 There’s also an inherent relationship between the restaurant space and the shop next door, namely in the presence of decor elements created by local female makers in the Milwaukee area.

Take for instance, the cushions which hang behind the banquettes on either side of the bar. Inspired by seating they found in a bar while visiting New York, the cushions were designed by the Schaefers and fabricated by Vanessa Andrew of Madam Chino using custom fabric and Loom House antique rugs. They’re hung with leather straps made by Jess Goehner of Directive, whose leather purses and bags are sold at Orange & Blue. 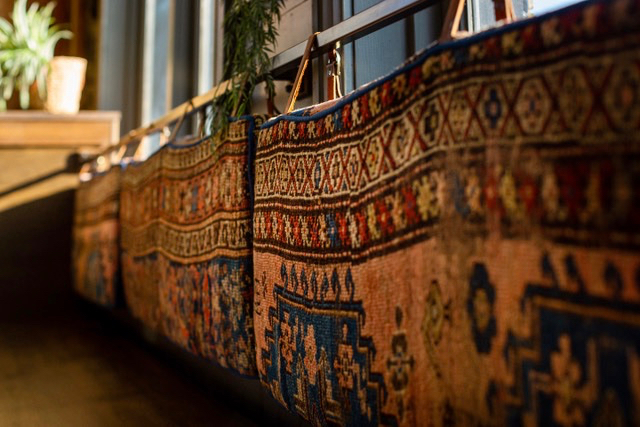 Folks can linger at those banquettes sipping espresso from mugs made by Kim Eckroth of Covet & Ginger. 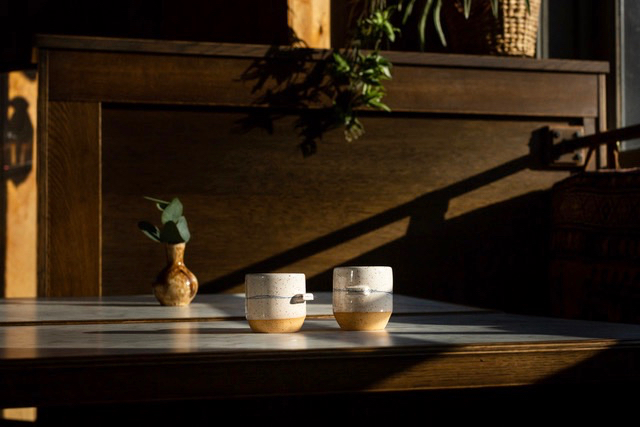 Even the ginger-colored wallpaper on the Northern walls is a local find, sourced from Chasing Paper.

"One of the things we wanted was to bring as much texture to the space as possible," notes Whitney. "It’s playful and not too busy. It also creates a juxtaposition between the masculine elements that are inherent to the space and a softness that reflects more of the look and feel of the shop."

Meanwhile, a variety of the art donning the walls of the space was created by local artist, Whitney Anderson of Wit & Co., including a graphic illustration depicting Wolfgang’s father when he was just 36 years old, the same age as the burgeoning restaurant owner.

Like the restaurant’s interior, the menu at Uncle Wolfie’s will feature a mix of old and new.

Folks will find standards like Johnny cakes with whipped butter and syrup, steak and eggs with tavern potatoes and a classic eggs Benedict along with creative takes on classics like peanut butter and jelly stuffed French toast and a sweet potato chorizo omelet. Items are priced between $7 and 12. 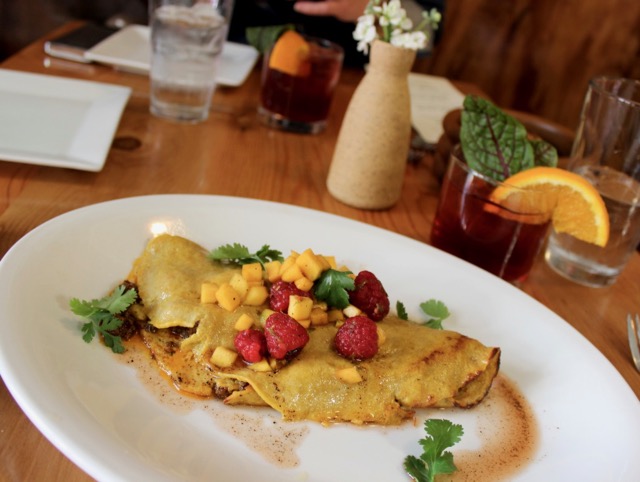 Lunch options include salads, including heartier varieties like steak with black beans, roasted vegetables, greens and lime dressing. There will also be sandwiches including simple options like chicken salad and grilled cheese as well as items like the "BCSS" featuring house beet-cured salmon with fixings including bacon, avocado, balsamic roasted tomatoes and greens on sourdough with everything bagel seasoning.

There will also be burgers, including the Breaky Burger featuring an American cheese stuffed ⅓-pound burger topped with Weber’s mustard, raspberry balsamic pickled onions, bacon and an egg. All lunch items fall in the $9-14 range.

The bar will offer bottled and canned beer, a short list of wine and a variety of creative cocktails – from bloody marys to toddies made with jasmine tea – along with full coffee service. Watch for more information on the menu later this week.

Beginning Dec. 17, Uncle Wolfie’s Breakfast Tavern will be open Monday through Friday from 7 a.m. to 3 p.m. and Saturday and Sunday from 8 a.m. to 3 p.m.