Last week, Brookfield-based North Shore Bank opened its new branch in an area that's come to be known as the North End. The branch, at 510 E. Pleasant St., was announced in 2018 and combines new construction with a brick house that appears to have been built in 1880.

Last week, Brookfield-based North Shore Bank opened its new branch in an area that’s come to be known as the North End, thanks to a development built there after the removal of the Park East freeway.

The new branch, at 510 E. Pleasant St., was announced in 2018 and combines new construction with a brick house that appears to have been built in 1880, though some sources disagree. 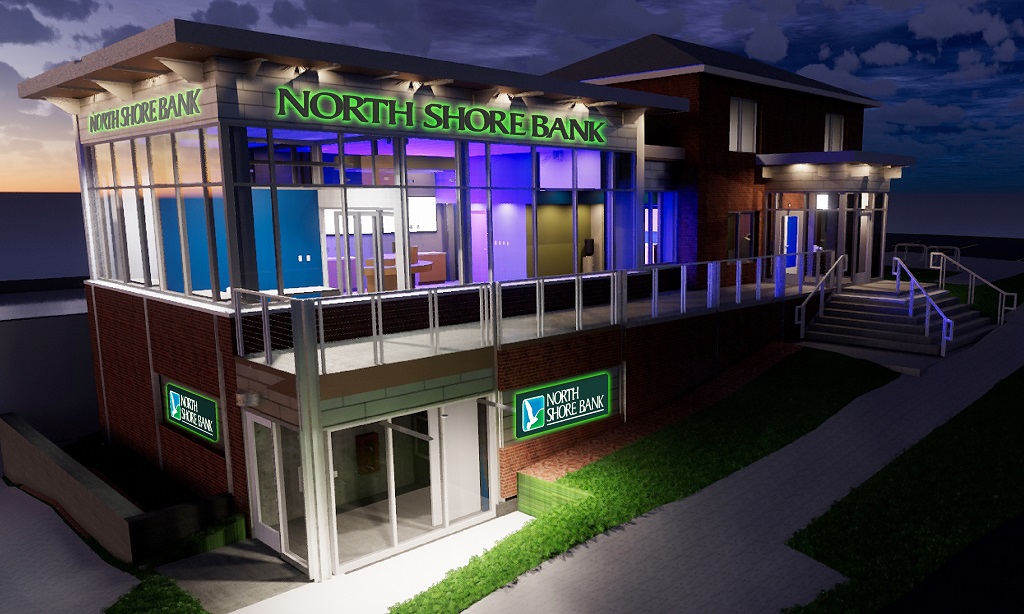 A couple renderings of the bank branch, designed by Plunkett Raysich Architects. 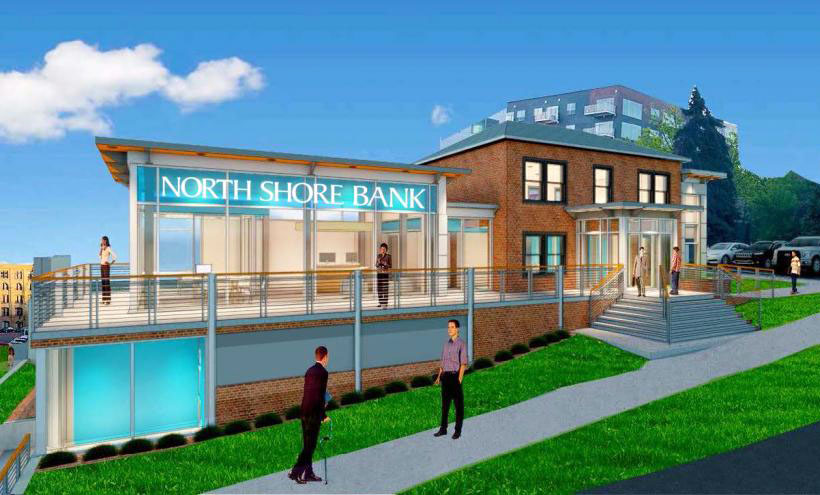 The 1,800-square-foot bank branch was slated to open on March 25, but, these days, the fact that anything is opening at all feels a bit like a miracle. The state of the art, walking-friendly branch is perfectly suited to the moment, however, thanks to its two walk-up video tellers that allow customers to bank without any in-person contact.

A spokesperson for the bank noted that when the bank compiled its month-end customer transactions data last week, it found the use of its video tellers at other branches had ballooned.

"Video teller transaction data from the last week in March increased by 108 percent – more than doubled – compared to a similar period in February," said Alicia Wilson, "even though overall transaction levels dropped nearly in half from those same two time periods. That means half as many customer transactions occurred, yet twice as many were done via video teller.

"This shows the obvious need for these two new video tellers to be up and running for this community." 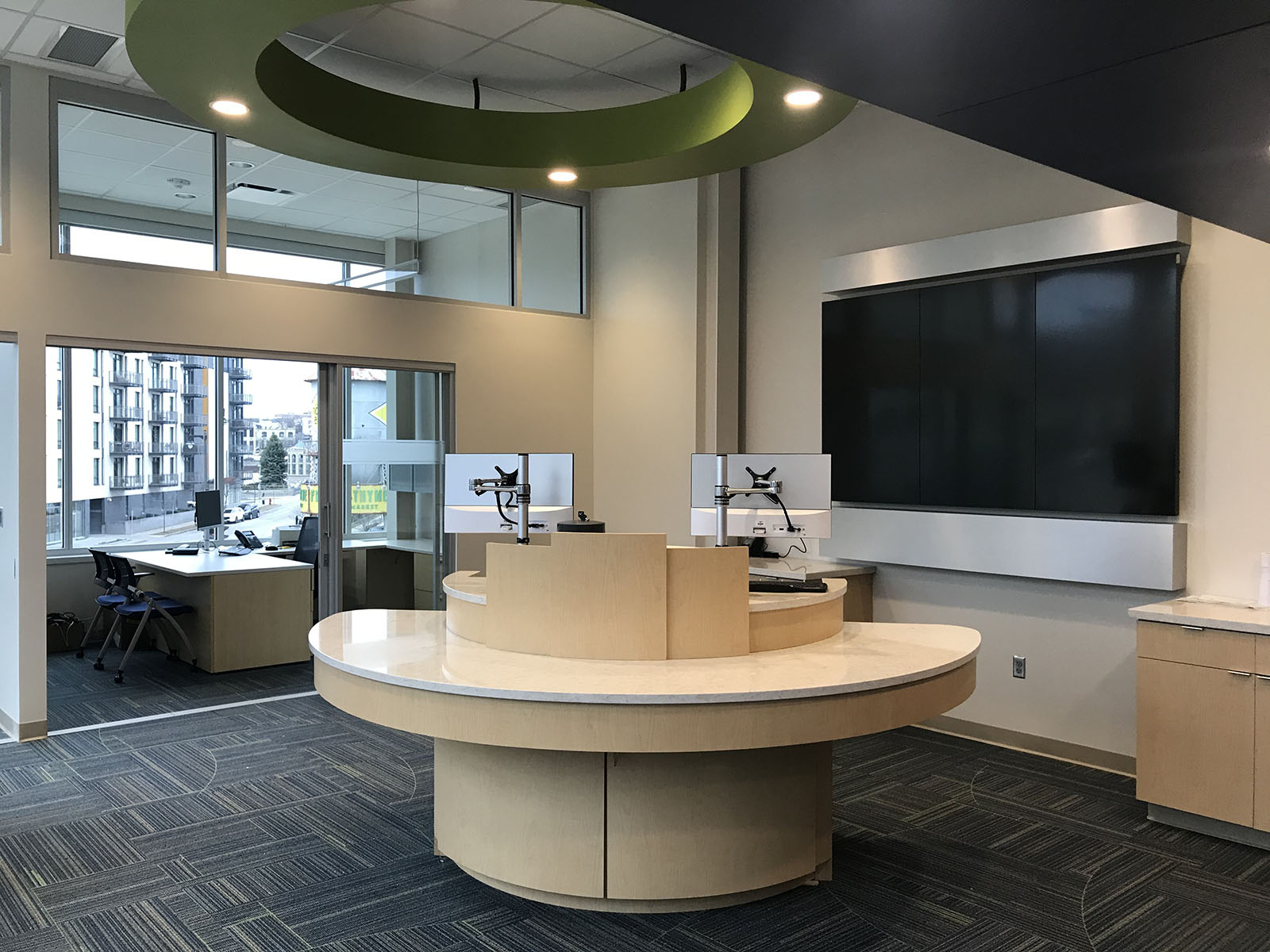 Inside the branch, they’ll also find actual human bankers, along with a self-service coin counter and other amenities in an open concept lobby.

The entrance to the bank – designed by Plunkett Raysich Architects – is in the former duplex that the Wisconsin Historical Society says was built in 1930 but which appears on the 1894 and 1910 Sanborn maps. City of Milwaukee data places the construction at 1880.

Early references to the house, which has always been set back from Water Street, show that it originally bore a Jefferson Street address. Before it was vacated to connect a traffic triangle to the "mainland" at the corner, Jefferson Street dipped up slightly north of Pleasant, as you can see on the 1894 Sanborn Fire Insurance Map (below). 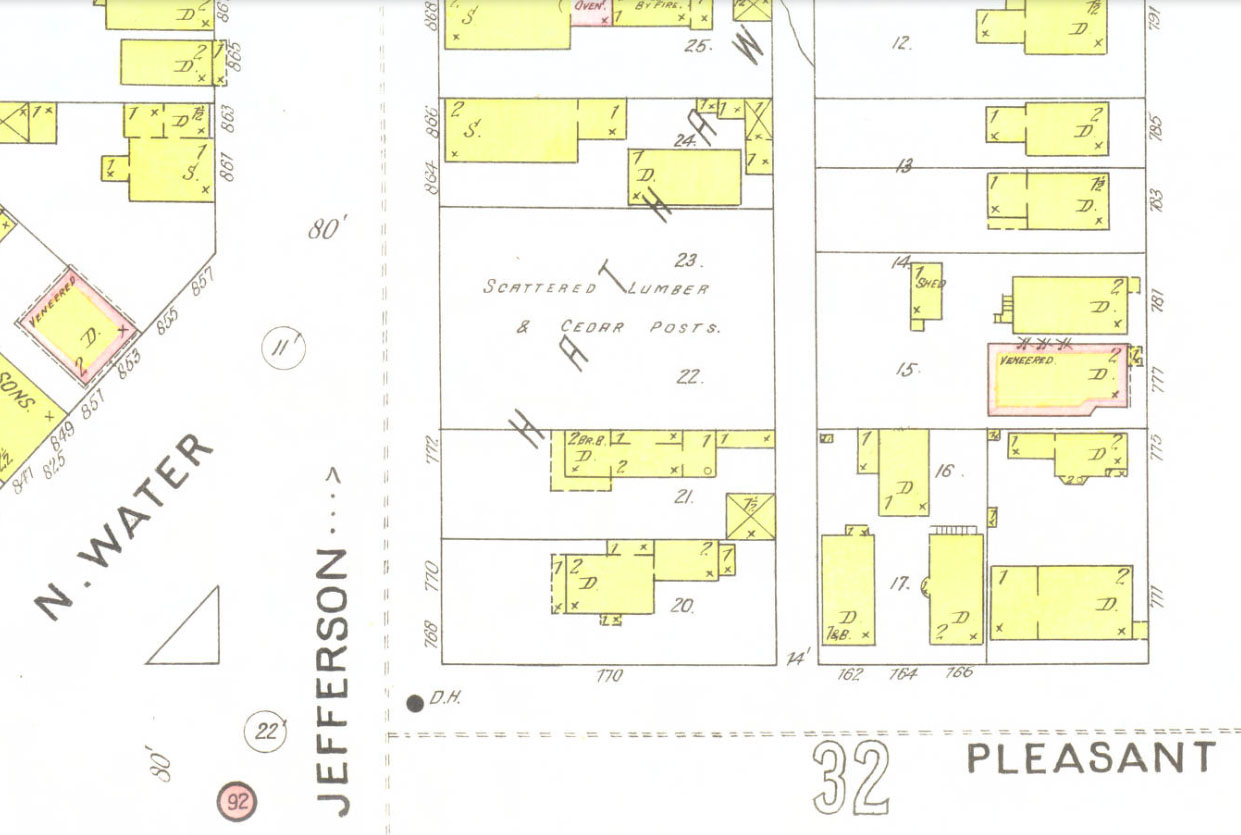 In the 1890s, it was home to Mr. and Mrs. Robert Schilling, who hosted meetings of the Unity Spiritual society – an internationalist Christian spiritual healing group – there.

By 1910 (see map below), the house carried a Pleasant Street address, and some residents of the home in the first decades of the 20th century worked at the nearby tanneries.

Like 36-year-old German-born Lewis Garl, who lived there with his wife Lena and their five children in 1900. Sailor Albert Snyder lived in the house, too, with his wife Mary, their two kids and a trio of lodgers.

A decade on, 29-year-old German Henry Lutz was resident with his wife Elise and their daughter. While Lutz was a machinist in a shop, the family's lodger, Crist Rybeck, a 59-year-old Swedish immigrant, worked in the tanneries along the river.

By the late 1920s, it was inhabited by members of the Italian community that began moving to the Brady Street area from the Third Ward. 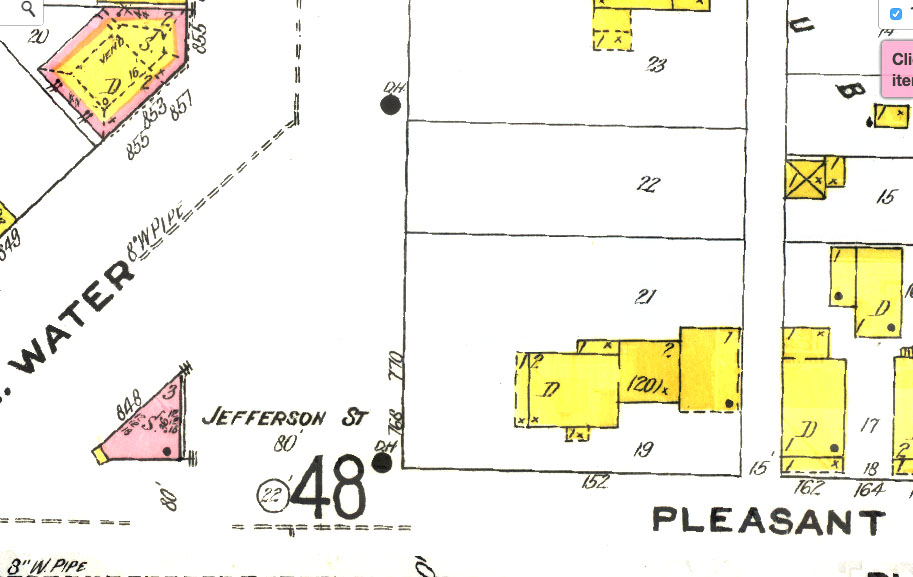 City permits offer a suggestion as to why some believe the house was built in 1930. A building permit exists from that year, but it allowed owner Frank Cola to veneer the home in brick, not to build it anew.

The home's most famous resident was Frank Balistrieri, who, says Wikipedia, pleaded guilty to conspiracy and racketeering charges in 1985 and was sentenced to 10 years in prison to be served concurrent with a previous 13-year sentence.

According to a 1980 article in the Milwaukee Journal, " in 1940, Balistrieri was continuing college studies but by then had married Antonina (Nina) Alioto, a childhood sweetheart, and they lived at 510 E. Pleasant St., according to the directory. In 1945, Balistrieri and his wife were still resident on East Pleasant, but he was listed then as being involved in trucking, and his student days were over. In 1958 ... (they were) living at 1417 N. Humboldt Ave."

Some later residents were noteworthy, too, albeit for different reasons.

In 1975, retired Joe Busalacchi won an award from the Mayor’s Beautification Committee for the flower beds he planted in a small but highly visible garden out front, bursting with geraniums, petunias, marigolds, phlox, zinnias, alyssum and roses. 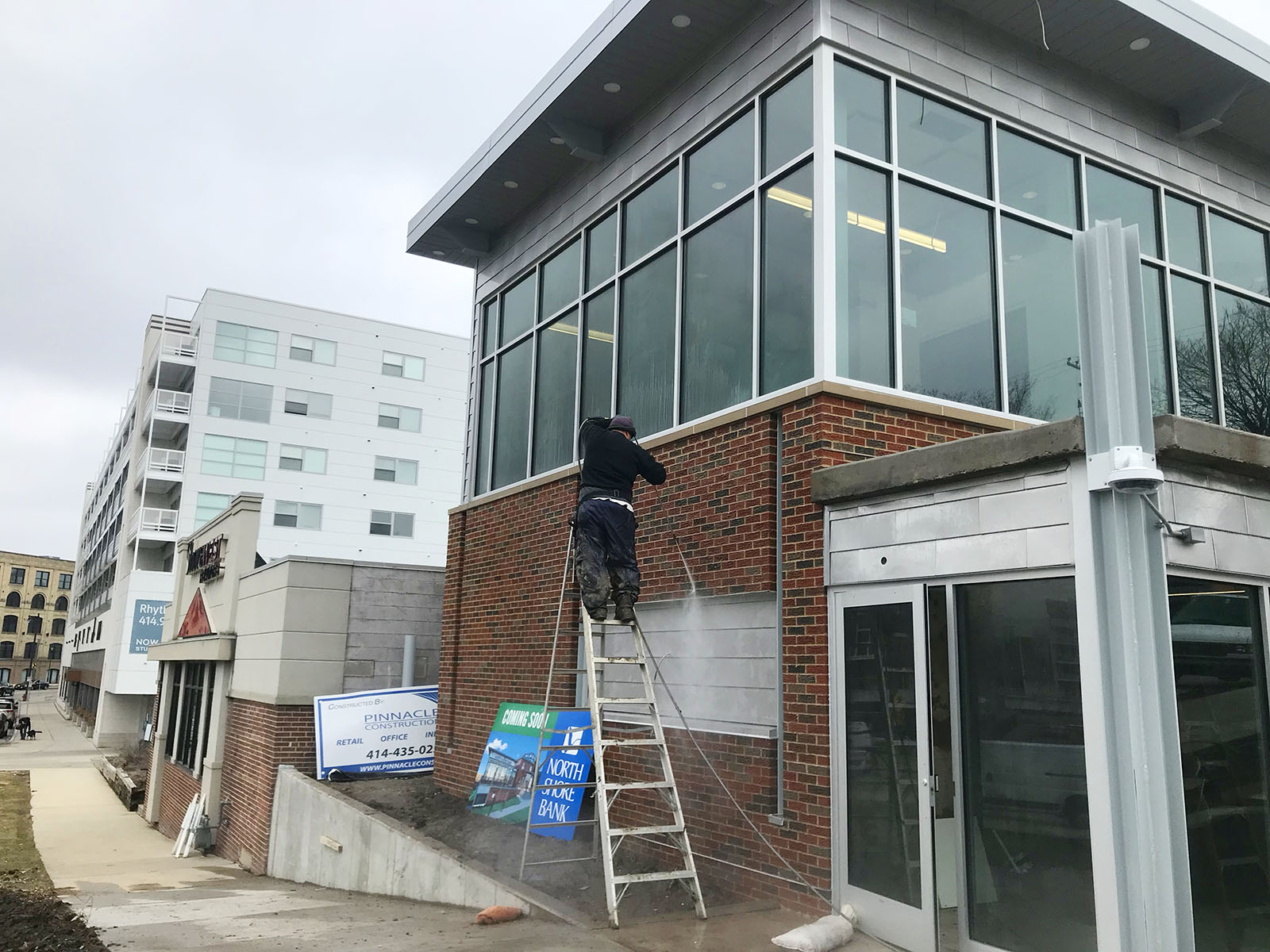 Around this time, the house was also home to Ivo Baldoni, a prominent figure on Brady Street, where his Baldoni music shop also made him well-known to and respected by local musicians.

For many years, the garage to the east of the house – constructed, according to city permits, in 1913 by owner Otto Fitterer, a retail ice dealer on Water Street – was used for commercial purposes.

In 2016, a developer worked with the city to get the house and its property combined with the grassy triangle lot on the corner into a single property to allow for further development of an intersection that is also home to North End and Rhythm residential developments, as well as retail like Alderaan Coffee, Fresh Thyme Market and a Shorewest Realtors office.

North Shore bought the land that same year and began planning the $700,000 development. 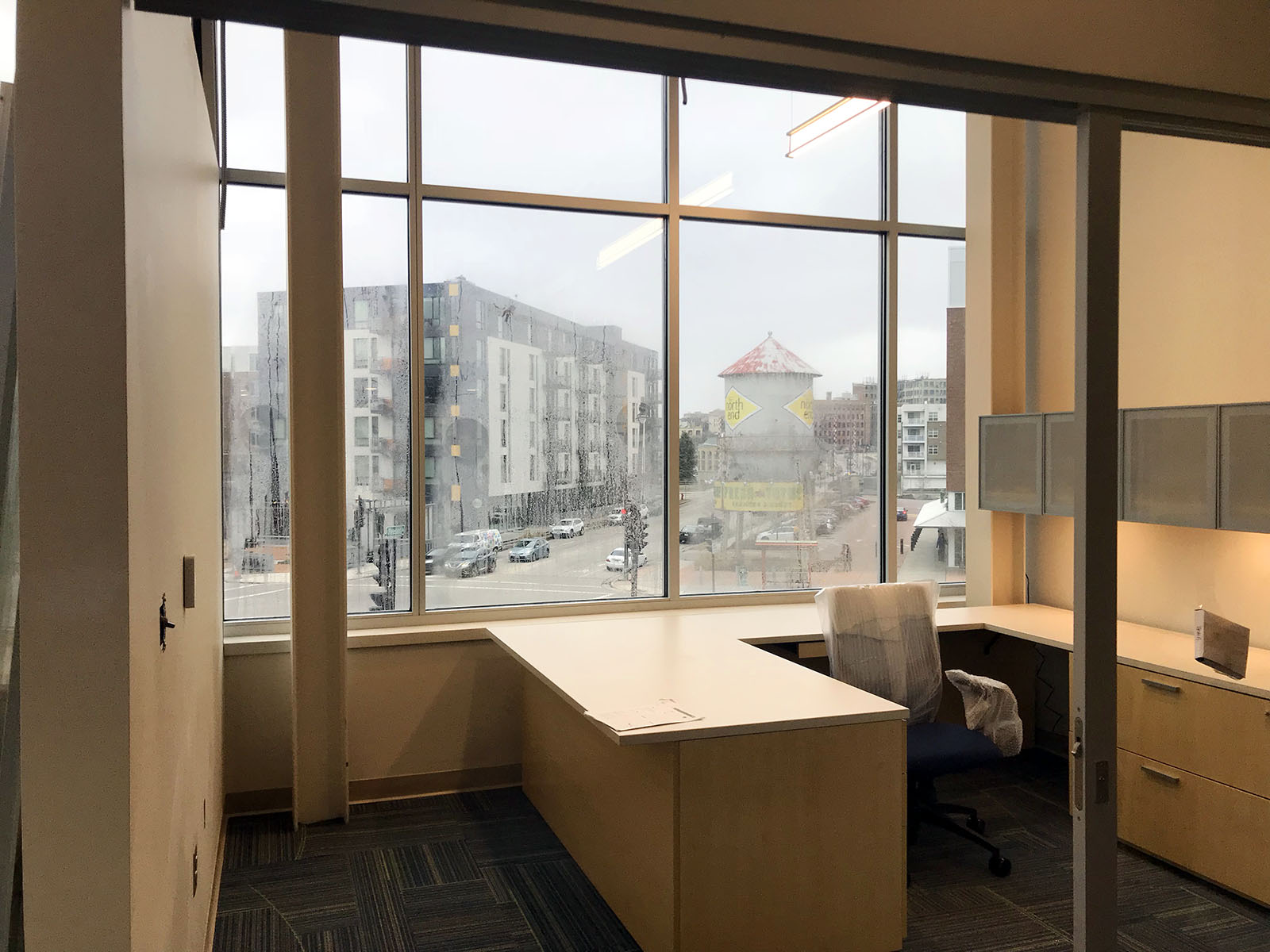 Thanks to the remote video tellers on the east and west sides of the building, customers will be able to conduct bank business seven days, 70 hours a week.