Perhaps I shouldn't have been surprised to step inside the former Ritz Theater movie house 3608 W. Villard Ave. and find it intact as a movie house. It hasn't really been gone all that long.

Perhaps I shouldn’t have been surprised to step inside the former Ritz Theater movie house 3608 W. Villard Ave. and find it intact as a movie house. 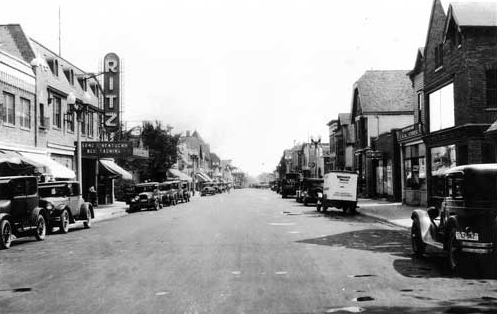 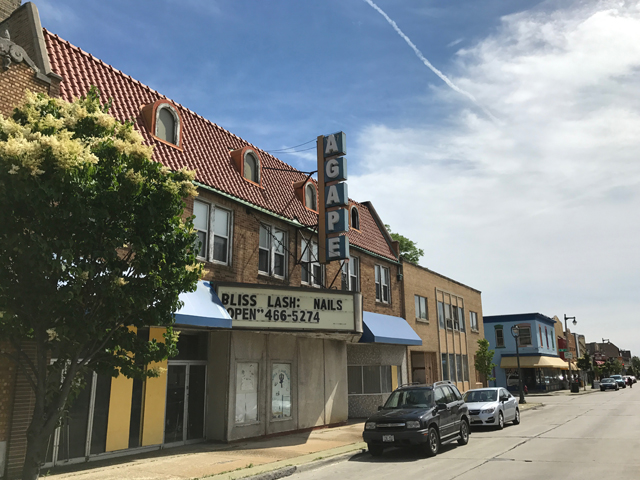 The same thing happened when I visited the old Grand on Holton and Locust. But, other times, like when I explored the old Lyric Theater on Vliet Street, I had to be content with easter eggs and clues, since all the seating had been removed and the auditorium carved up into rooms.

But after The Ritz, which was called the Villa by then, was closed by Marcus Theatres in 1986, it had a brief return as a movie house in the following decade, so it hasn’t really been gone all that long. 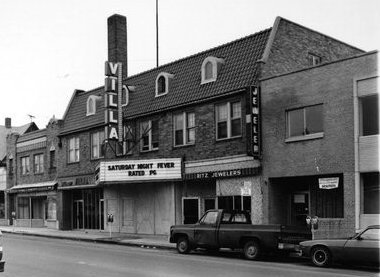 The Ritz in 1977. (Courtesy of CinemaTreasures.org)

Now, the building is vacant and was acquired by the city in a tax foreclosure. The Department of City Development has listed it for sale for $20,000. (In 2022, the City relisted the theater, along with an adjacent property, for $75.000.)

The Spanish Colonial style theater was built as the independent, 840-seat Ritz cinema in 1926 by Michael Brumm, who had opened a nickelodeon called The Princess across Villard Avenue in 1912. His son Arnold helped out at the theaters. 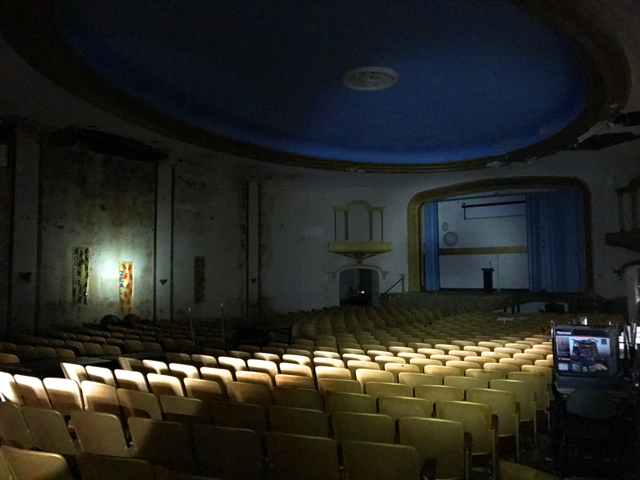 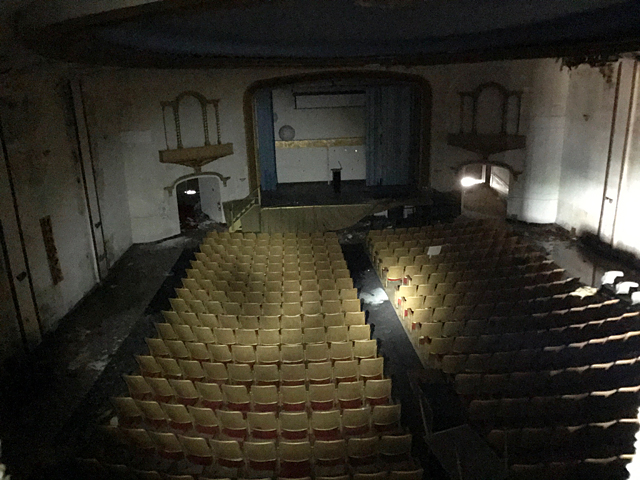 As was often the case with movie theaters of the era, The Ritz had an adjacent retail space and offices upstairs. Over the years, those spaces were occupied by a confectioner, a doctor, a barber, a typewriter store, a gift shop, a real estate and mortgage business, and spaces upstairs also served as residences from 1935 until the end of World War II.

"In summer, when business declined, the Brumm family would travel to outlying areas with a portable generator and a movie projector, bringing the movies to farmers or businesspeople in small towns without movie theaters," wrote Larry Widen and Judi Anderson in their book, "Silver Screens: A Pictorial History of Milwaukee’s Movie Theaters." 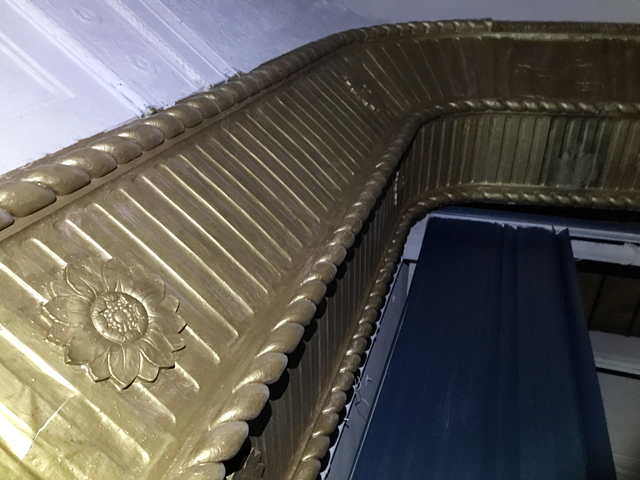 "The show was done on a weekly circuit, with posters left behind to advertiser the next week’s feature. When Michael Brumm opened The Ritz in 1926, he stopped the traveling shows and settled into more routine business operations."

Brumm tapped his son, Arnold, as assistant manager once the latter graduated from high school, Widen and Anderson wrote, leading Arnold to ultimately take over the business entirely. 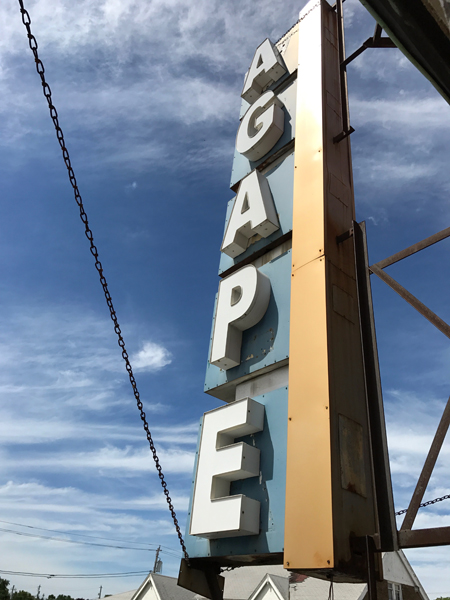 "Arnold Brumm remembered many occasions when film booking became a problem at his family’s Ritz Theater," Widen and Anderson noted in "Silver Screens."

"‘The buying power of the chains really put the squeeze on the little guys,’ Brumm said. ‘And "block booking," the packaging of one great picture with 20 lousy ones, hurt us a lot.’ Studios often came to the independent owners with a year’s worth of projected films. To keep a constant flow of films on his screen, the theater owner bought the lot sight unseen, hoping that several films in the package would turn out to be hit attractions. Until block booking was made illegal in 1939, it was an accepted way to do business, ‘Film salesmen were very aggressive guys,’ Brumm said. ‘They would do almost anything to ... control your screen for 52 weeks at a time.’ In spite of the hardships connected with being independent, the most determined of the owners found their markets, and their theaters prospered."

For an interesting look at the finances of The Ritz in this era, check out Matthew Prigge’s delve into one of the theater’s ledgers from 1935, a year in which Brumm’s place lost $320.

One way Arnold Brumm worked to "find his market" was to catch the public’s eye in unusual ways, according to Widen and Anderson.

"Although he had always been known for his innovative advertising techniques, such as displaying movie posters upside down, Brumm pulled off his most successful stunt to promote the sale of war bonds in 1944. 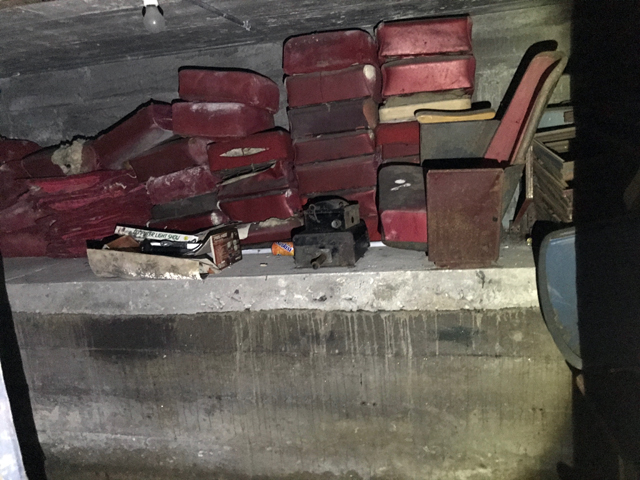 Seats stored beneath the stage.

"Coming up short on the bond sales quota set for his theater, Brumm climbed to the top of the Ritz theater’s five-story chimney on a Saturday afternoon. A huge sign on the chimney said, ‘BUY ME WITH WAR BONDS.’ He stayed at his post for the next 24 hours, and war bond sales were brisk. When the final figures were tallied, Brumm’s stunt had doubled the theater’s goals."

A post on Cinema Treasures, suggests that the theater was operated by the Fox Wisconsin chain during the 1940s.

According to a much later Milwaukee Journal Sentinel article," "One of the strangest efforts came in the early 1950s, when the theater implemented something it called ‘Dignity Nights.’ On designated evenings, candy eaters, popcorn munchers and peanut shell snappers were corralled into a special section, protecting the aurally sensitive from the oral cacophony."

In late 1959, Marcus Theaters, which had moved into the Milwaukee market when it acquired the Tosa Theater (now the Rosebud) in 1940, bought The Ritz and ran it for the last 11 weeks of the year, according to Marcus archivist Leslie Heinrichs. 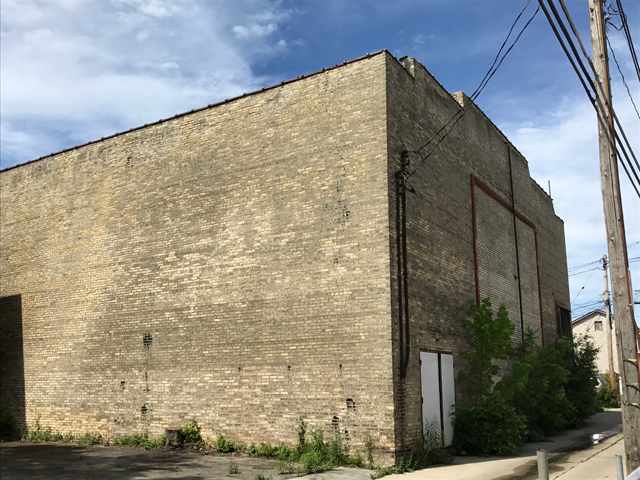 The view from the alley. It appears a sign had been painted within the molding on the rear wall.

At the time, movies were 85 cents for adults in the evening, 60 cents for matinees and early bird screenings. Children paid 25 cents and students twice that.

In 1962, three days before Christmas, the theater was re-launched as The Villa, playing both on the architecture of the building and the location on Villard Avenue.

Heinrichs shared these interesting tidbits from the theater’s Marcus era...

In 1986, Marcus closed The Villa and two years later Tanya and Herman Lewis bought the building and attempted to run it as a second-run house, then a first-run cinema, then a community theater and center before calling it quits in March 1995.

Since then, the building has been home to a salon, a school (called AGAPE), a church, a bookstore. But now it’s vacant, and while it’s seen better days – there is a fair bit of water intrusion – it still looks entirely like a theater inside.

There’s a lobby that looks as though it’s definitely been altered at some point. 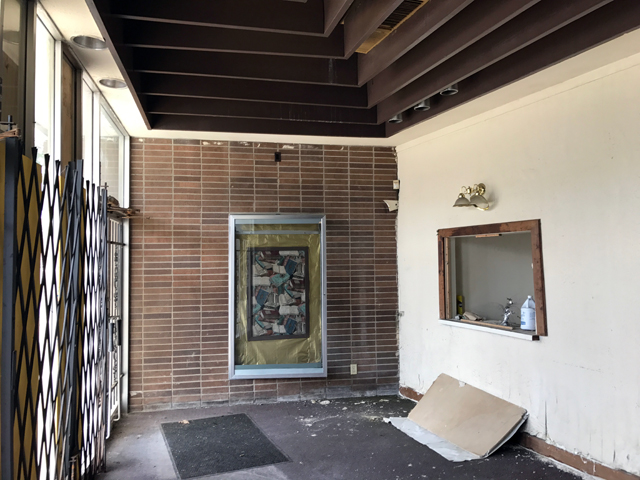 The marquee still hangs above the door, with a vertical sign advertising the school that once occupied the building. Up the terrazzo stairs are a handful of empty offices facing the street. Across the hall are some storage rooms and the projection room, which, as was customary, has its own bathroom. 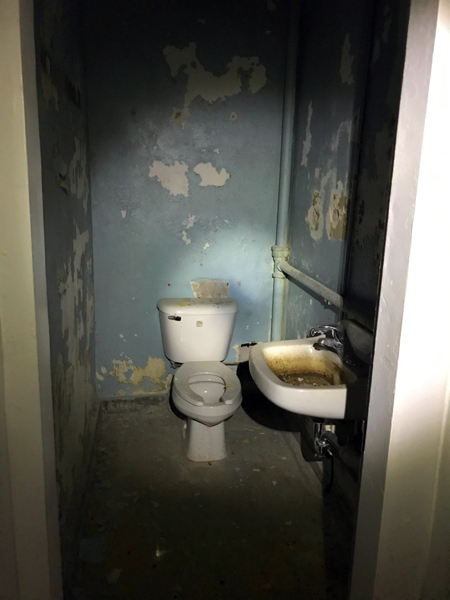 One door offers a view (though no ladder anymore) up to the attic lit by those dormers you can see on the facade.

In the basement, which I didn’t get to explore completely, were the bathrooms, which look as though they’d been updated at least once. 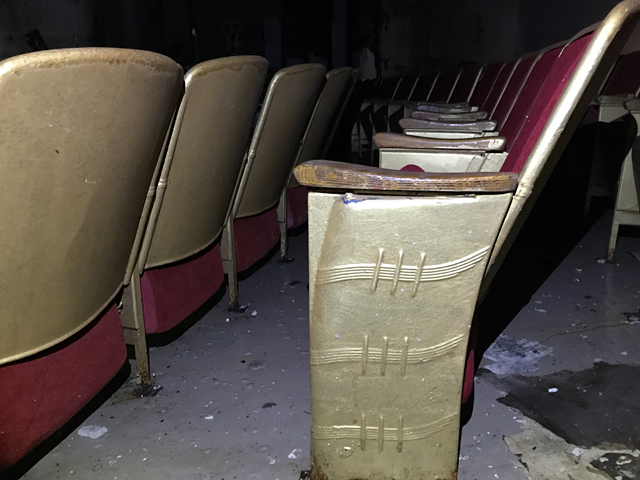 Inside the auditorium, the seats are all still there, including what are surely the original cast iron decorative standards at the ends of each row. 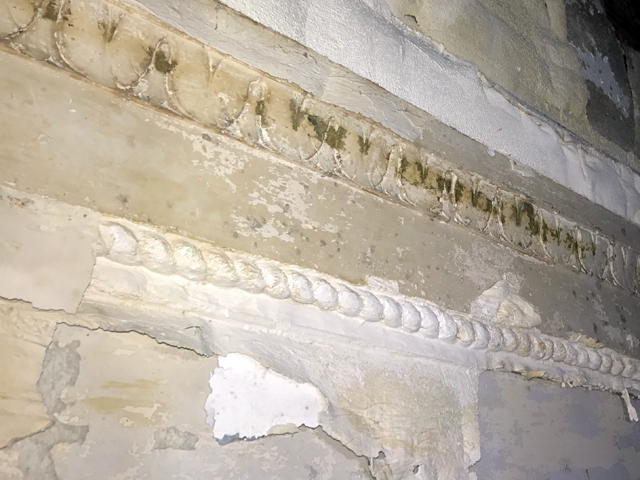 There are decorative plaster moldings on the walls (pictured above), and the ceiling has a recessed dome painted blue. Flanking the stage are a pair of exits with organ pipe lofts above (there was a 2/5 Kilgen organ – now in a private collection in Columbus, Ohio – up there). 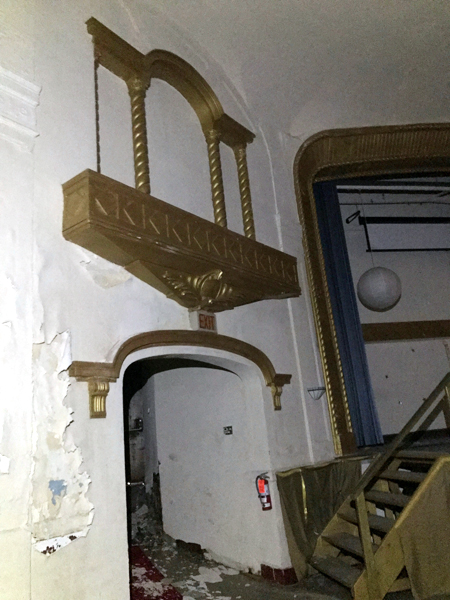 On one side, you can scale a ladder to peek into the organ pipe loft, which is empty and the opening that allowed the sound into the theater has been boarded up (pictured below). 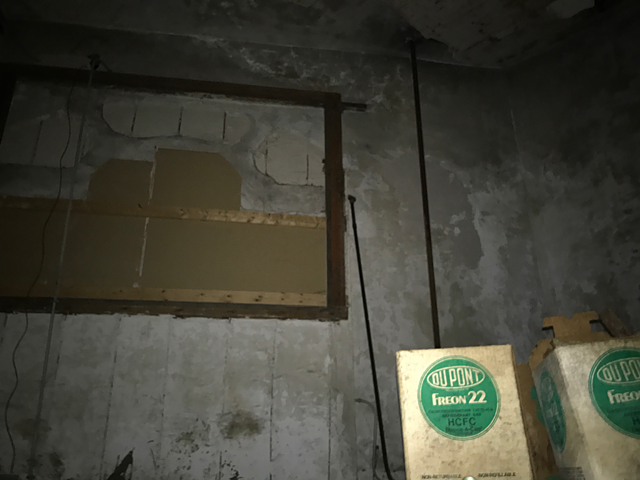 There’s a space below the stage, accessed via the orchestra pit – which itself sits under a stage extension – where there are extra seats and other objects stored. 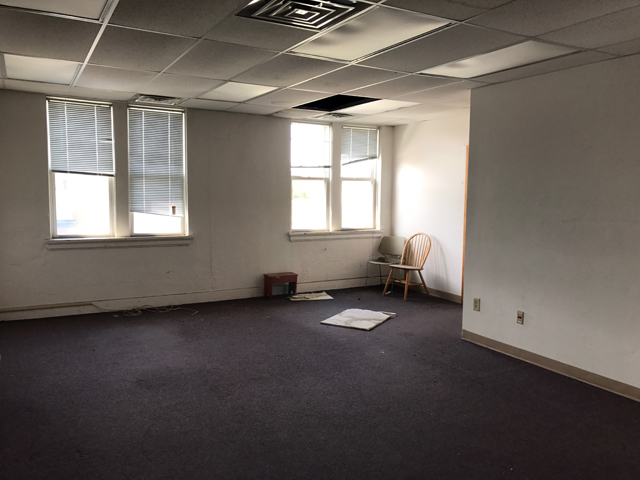 A second-floor office (above) and a peek up into the attic (below). 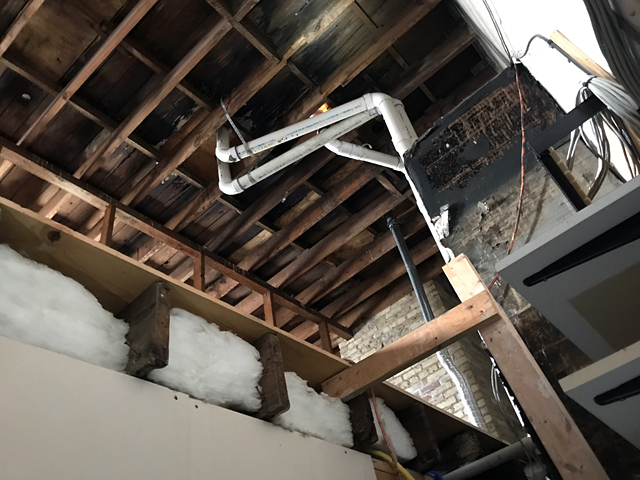 Up in one of the offices there are more modern plexiglass letters for the marquee. Seven of them now appear outside: "For Sale." 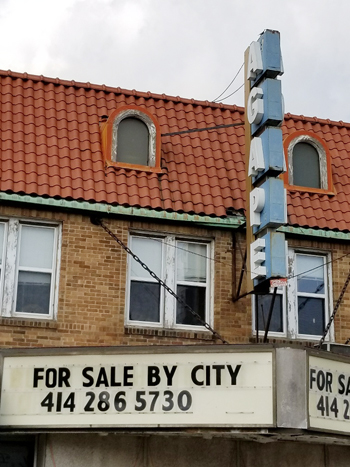