The day has arrived. You can now, officially, grab a really great cup of morning coffee (as early as 5 a.m.) as well as your pre- or post-dinner pint of beer, all at the same place. Even better, you can do it in the company of a group of like-minded, community driven people.

The day has arrived. You can now, officially, grab a really great cup of morning coffee (as early as 5 a.m.), as well as your pre- or post-dinner pint of beer, all at the same place. Even better, you can do it in the company of a group of like-minded, community-driven people.

Yes, it’s true. After more than five years of contemplation, three years of planning and nearly a year and a half of dedicated labor, Vennture Brew Co. has opened its doors at 5519 W. North Ave. in Uptown Crossing. 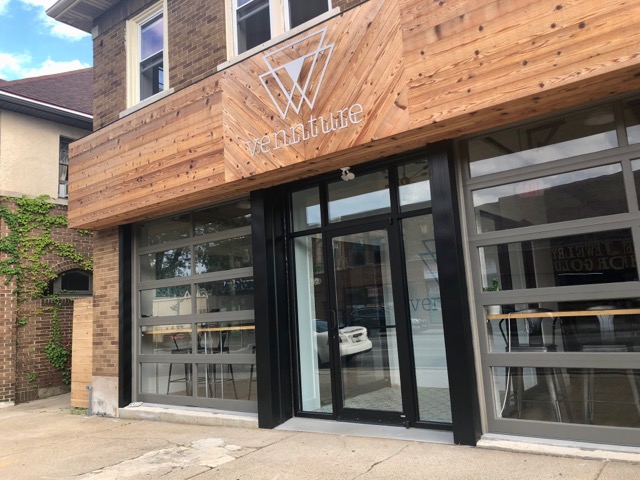 "Vennture Brew Co. is a coffee shop and a beer bar," we noted in August of 2016, when we broke the news that the adventurous new concept was coming to the West Side. "It's a place where beer and coffee are brewed and roasted on site, and inspiration is the mother of invention. And maybe most of all, it's a community gathering space that provides not only a place to drink and work, but also a foundation for small businesses to collaborate for the greater good."

And even now – nearly two years later – the vision remains the same.

Vennture’s owners are Rob Gustafson, Simon McConico and Jake Rohde, three accomplished young photographers who traded their cameras for stainless steel tanks and bags of coffee beans and hops, all in the name of passion, community and creative spirit.

Over the past year and a half, they’ve poured their hearts and souls into the Uptown Crossing location, which is situated between neighborhood mainstay McBob’s and a brand new pocket park and Bublr Bike station. It’s right next door to the forthcoming Tusk restaurant and just across the street from the nascent Scene 1 Restaurant & Lounge. It’s also just down the street and about a block over from the new Bittercube apothecary, expected to open this fall.

Along the way, they’ve been connecting with neighbors and getting involved with the neighborhood. Gustafson is a member of the Uptown Crossing BID, and McConico has been named the area representative for zone 4 of The Washington Heights Neighborhood Association, where he resides. 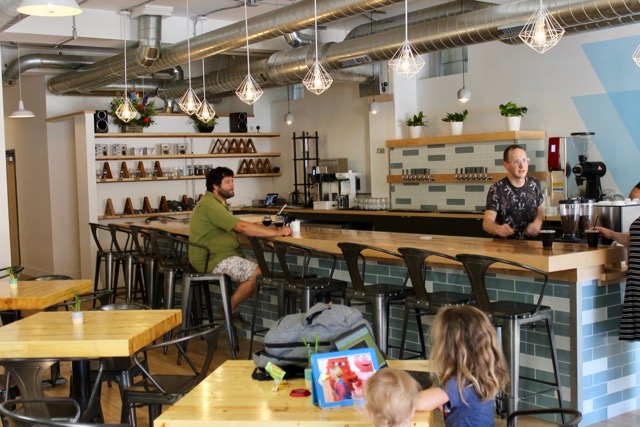 That sense of community is at the heart of Vennture, which was created expressly to bring people together.

"One of our favorite things about wedding photography was the creation of that microcosm of community created when people let us into their families," notes Rohde. "But so often when the wedding was over, that sense of community dissolved. The great part of this is really creating a community we can be a part of every day."

The partners have also overcome myriad struggles, from construction delays to financial set-backs. However, thanks to persistence, support from financial backers and a whole lot of sweat equity, Vennture Brew Co. is looking seriously stellar.

Gustafson plumbed the glycol chiller in the brewery and, according to McConico, "figured out how to make every single machine in the place operate."

Rohde painstakingly hand-cut and painted the tiles used for both the coffee and beer menu boards. 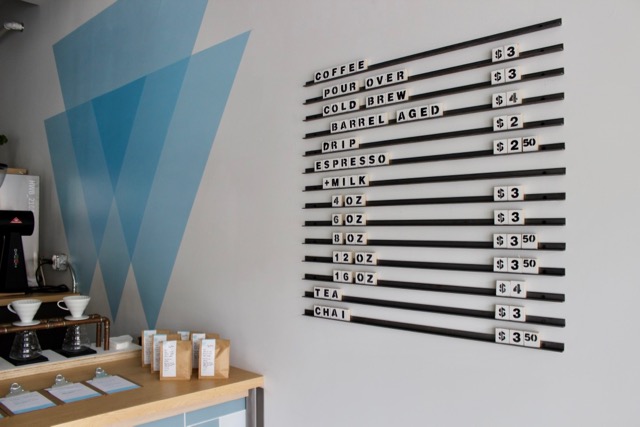 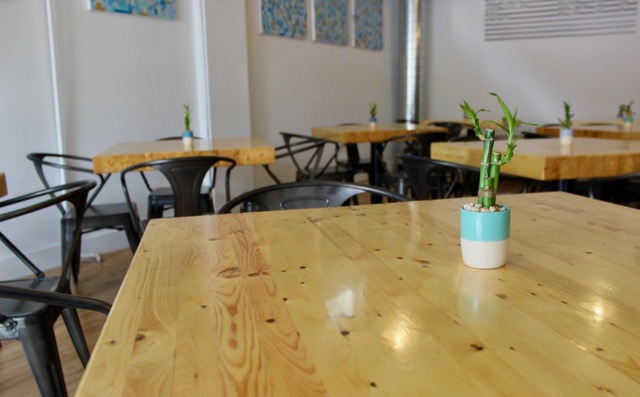 There's also this gem: a bench made from the building's old radiator. 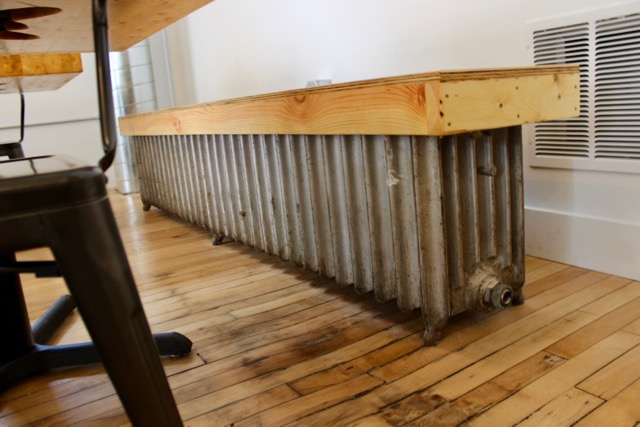 Meanwhile the bartop, which was constructed from flooring upcycled from the building, was built by Gustafson and McConico. The accompanying bar stools were purchased through Kickstarter funding.

Rohde also painted the whimsical art which hangs throughout the venue. 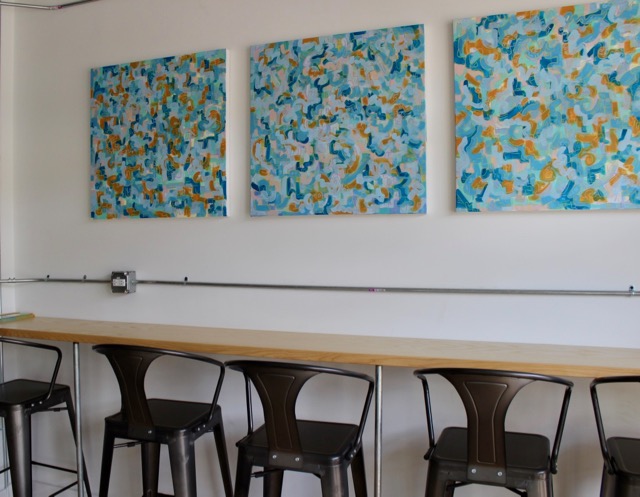 And, while you won’t glimpse it from the bar, there’s also a five barrel brewing system in the basement of the building, which is overseen by a scruffy but stately likeness of Prince Charles (a gift from a customer at Draft & Vessel, where McConico worked for a time to help finance the Vennture build-out). 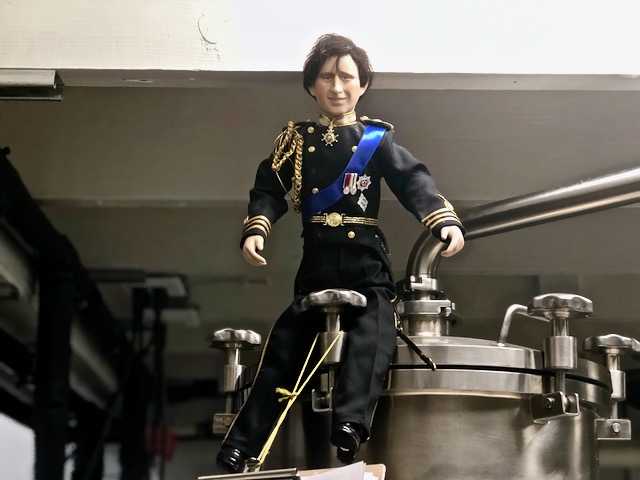 On the coffee side, customers will find a full-service coffee bar featuring pour-overs, espresso and standard drip coffee available at a service counter adjacent to the bar. 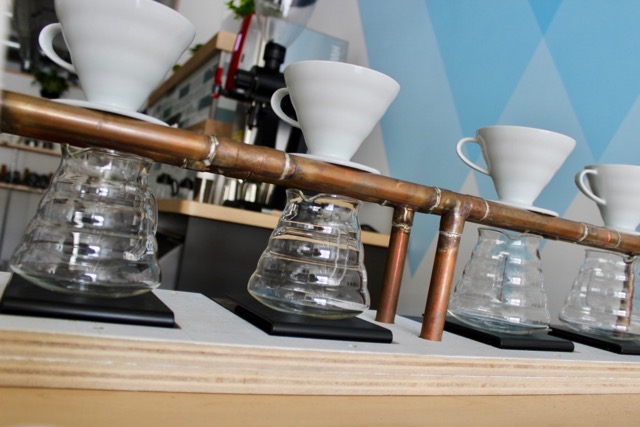 Looking for something different? Try their barrel aged cold brew made from Brazilian natural beans aged in a Twisted Path rum barrel.

You can also pair your morning, mid-day or evening tisane or cup of joe with a pastry from Troubadour Bakery.

On the beer side, you’ll find six brews on tap in a variety of drinkable styles.

Critical Adjustment is a tropical stout, sporting a higher ABV with a bit more sweetness than your average stout. It has notes of dark chocolate, cacao, dark fruit and toffee and is available both straight up or finished on rum barrel aged natural Brazil coffee. Its name is a reference to learning curves experienced with both the brewing equipment and coffee roasted as part of the brewing process.

As the story goes, this beer was the first to be fermented in the brewery’s glycol chiller, which – as luck would have it – didn’t exactly hold its temperature when left overnight.

"We set it to 65 degrees and went home," notes McConico. "And when we got back it was registering at 35 degrees, so the fermentation process stalled. We needed to figure out a way to get the temperature back up to 65 degrees [a challenge considering the brew was in a chiller in a 50-degree basement] ... After much swearing and pacing, we bought a sous vide wand, put it into the reservoir and isolated the tank, bringing it back up to the requisite 65 degrees."

Meanwhile, when roasting the barrel-aged beans for finishing the beer, they found that the drum on the roaster wasn’t calibrated properly, resulting in a larger-than-average gap through which the beans were escaping into the exterior of the roaster. In the process of solving the issue, they also got a lesson in machinery calibration.

Another brew, named The Heights, is an easy to drink table brew featuring a combo pilsner and wheat beer fermented with French Saison yeast.

There’s also Bruv, a kettle soured Berliner Weiss that’s refreshing and citrusy with a tartness that comes from lactic acid. It can be ordered straight up or with any number of syrups, including one infused with cascara (coffee cherries).

Throw Parties, a Saison with a 6.4% ABV, sports a tagline: "Don’t throw shade. Throw parties." It features big citrus notes with a nice balance of grapefruit pith from the yeast. It’s named for the "party" of grains with which it was brewed.

Meanwhile, 49th Street – named for the street in nearby Washington Heights – is a New England IPA made with Mosaic and El Dorado hops that showcases tropical fruits and melon.

And there are more beers where those came from.

"Our goal is not necessarily to have flagship brews," says McConico. "But we’re not adverse to brewing a beer more than once if it’s really good. We’ll be changing things up fairly often. Ultimately, the goal is to create drinkable beer that you can sit and drink more than one glass of."

Trying more than one beer (or coffee) is easy at Vennture. You can sample up to three, served in 5 ounce snifters, which more readily allow the enjoyment of the beverage's bouquet. They are served in custom triangular wooden holders that imitates the brewery’s geometric venn-diagram-esque logo.

The crew is understandably excited to share the fruits of their labor with the public.

"It’s super exciting," Rohde says of the realization that the Vennture Brew Co. dream has come to fruition. "And with that comes a lot of nervousness about whether or not we’re doing everything we can … whether our product is good enough."

"And there are all the questions," he adds. "How much pastry will we sell each day? Where do we buy garbage cans? How much coffee do we need to roast to meet demand? A lot of it is really about not disappointing the people who’ve gotten so excited about what we’re doing. There’s been such excitement about our opening, and that’s so great. But it’s also intimidating. Will we disappoint someone? Probably. But we really want to get very close to their expectations, and then do that again and again and again."

Fortunately, that sense of unsettled discomfort is exactly the sort of thing that feeds innovation and creativity … which is precisely what you’ll find at Vennture Brew Co.

Vennture Brew Co. is open from 5 a.m. to 10 p.m. Moving forward, the hours may be extended on the weekend, based on customer demand.