Once and again Milwaukeean Jim Hanke started his Vinyl Emergency podcast a year and a half ago while living in Chicago. But now that's he's back in Brew City, he's brought the respected music podcast with him.

Once and again Milwaukeean Jim Hanke started his Vinyl Emergency podcast a year and a half ago while living in Chicago. But now that’s he’s back in Brew City, he’s brought the respected music podcast with him.

As you might infer from the name of the show, the podcast focuses on music on vinyl, the format that many prematurely declared dead but that has now experienced such a revival that some businesses that made their bread and butter manufacturing CDs now produce more LPs than digital discs.

"Unlike other shows that may focus on songwriting and how artists got their start, Vinyl Emergency gives an outlet to musicians to discuss the vinyl records that wow'ed or influenced them," Hanke says.

"We also give a voice to everyday collectors, so they can chat about their history in their hobby, as well as people in pop culture who want to reflect on what they remember about vinyl growing up, or record labels and pressers who can share some behind-the-scenes aspects on what they create. Record stores, buying habits, ‘white whales’ and more are also discussed, depending on the guest." 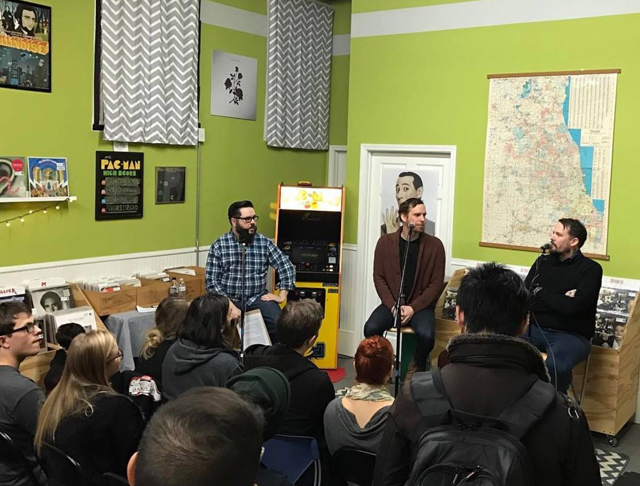 Hanke with Braid's Bob Nanna and Chris Broach in a live episode of Vinyl Emergency
at Chicago's Pinwheel Records in January.

"Part of vinyl's appeal is that it's a tactile object, and there happen to be a lot more memories people can pull from album covers or liner notes than trying to recall specific shows they played or how a song came to be," says Hanke.

"A lot of guests who are musicians or somehow involved in pressing or releasing albums talk about how having their own name on a vinyl record finally meant they were a part of this nebulous world that influenced them, like as if they were finally validated or suddenly ‘real.’ "That's a strong emotion for an undiscovered punk rock band in 2017 as well as for someone like Rosanne Cash in 1978, and it's been riveting to be allowed to capture that."

Hanke, who had moved to the Chicago area about a decade ago after having been active in the Milwaukee music scene – as well as writing for Prefixmag.com and modern-vinyl.com and contributing to the celebrated Sock Monkey Sound podcast – says that the podcast grew out of links he had in the Windy City radio world.

"I had made some connections with WGN Radio in Chicago – booking acts for interviews and live performances as a music PR guy on my own – I started to visit them in-studio to answer listeners' questions about vinyl's resurgence like where to buy or fix a turntable, how much their copy of a specific album is worth and the like," he recalls.

"That's when another off-and-on guest of WGN – film critic Jim Laczkowski – reached out to ask if I wanted to do my own vinyl podcast on his network of shows that he was launching. That was pretty much the start of everything; I started guesting on WGN in January 2015, and Vinyl Emergency's first episode aired exactly a year later."

Soon after Vinyl Emergency (the name of which is a nod to "Very Emergency," a landmark LP by Milwaukee’s The Promise Ring) debuted, iTunes spotlighted the show as "new and noteworthy," by featuring it on the front page of their podcast section, along with programs from Rolling Stone, Sub Pop Records and others.

"I realize fully that there are plenty of great podcasts for music discussion out there," says Hanke, "but it's been fun to delve into people's first memories of vinyl around their parents' house, record stores they remember as a kid or what their connection vinyl is currently."

Your questions about cryptocurrency, answered