As work proceeds on converting architect Edward Townsend Mix's imposing hilltop "Old Main" building - and five others - on the grounds of the Milwaukee VA Soldiers Home Historic District campus into veterans housing, the Department of Veterans Affairs has issued Requests for Proposals on three nearby structures.

As work proceeds on converting architect Edward Townsend Mix’s imposing hilltop "Old Main" building – and five others – on the grounds of the Milwaukee VA Soldiers Home Historic District campus into veterans housing, the Department of Veterans Affairs has issued Requests for Proposals on three nearby structures.

Those structures are Henry Koch’s eye-catching shingle-style chapel, built in 1889, Mix’s 1867-68 Governor’s Mansion, and Koch’s 1881-82 Ward Memorial Hall, a theater that hosted a wide variety of well-known talent over the years.

Suggested development plans for the three structures are due by Jan. 7, 2019. These projects are part of the VA’s Historic Reuse Program (HRP), which does not demand that the buildings be used only for homeless veteran housing, which opens up a broader range of potential developments than at Old Main. 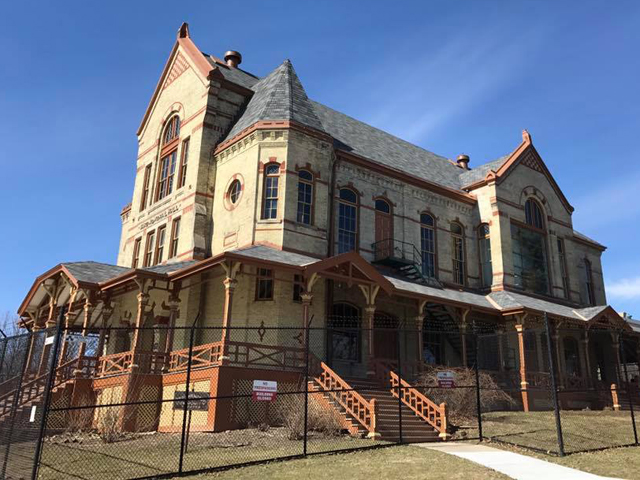 "These are remarkable buildings," said Peter Zanghi, president of the Board of Directors of the Milwaukee Preservation Alliance, in a statement issued today. "The opportunity to return them to the service of veterans has been a longtime goal of ours through the Save the Soldiers Home effort. This week, we took a major step toward making it happen.

"Our priority is to find interested developers who share our commitment to ensuring veterans are served by these buildings."

Last month, developers The Alexander Company and the Housing Authority of the City of Milwaukee (HACM) signed an Enhanced Use Lease with the U.S. Department of Veterans Affairs after receiving Congressional approval to move ahead with the $40 million veterans housing project in Old Main and five other buildings.

"This was a complex and critical process," said Joe Alexander, The Alexander Company president. "It’s just the latest step in our collective effort to welcome Veterans back into Old Main and other key buildings."

To learn more about the projects or to make a donation, visit SavetheSoldiersHome.com.