Warriors didn't like Bucks' celebration in win, say rematch is "going to be fun"

The Warriors were none too pleased at the unsportsmanlike behavior by Michael Carter-Williams at the end of the Bucks' streak-snapping home win over Golden State. They're looking forward to the rematch on Friday.

Remember when Michael Carter-Williams dunked in the definitive exclamation points on the Bucks’ streak-snapping home win over the Warriors on Saturday night? That was so great.

Remember when he then proceeded to stare, tauntingly, at Golden State’s bench as he ran back down the court? That was not so great.

Milwaukee was put on notice by Golden State late Wednesday night after the defending champs pounded the Phoenix Suns 128-103. Apparently, the Warriors were none too pleased at what they considered unsportsmanlike behavior by Carter-Williams and the Bucks.

Fortunately for Golden State but quite unfortunately for Milwaukee, which has lost two straight games since the big victory on Saturday, the teams face each other again on Friday in Oakland, Calif.

After the Warriors’ win over Phoenix, in which he scored 25 points, reigning MVP Stephen Curry made pointed comments about the Bucks, according to ESPN.com. "Oh, it was a nice celebration. We do remember that stuff. We were kind of laughing at some of the stuff going on. It was a big game for them. Friday will be a big game for us."

But that wasn’t all. Draymond Green also had some sharp words, especially for Carter-Williams, who had lost his job as Milwaukee’s starting point guard and came off the bench against Golden State. He’s since returned to the lineup and led the Bucks in scoring over the past two games. 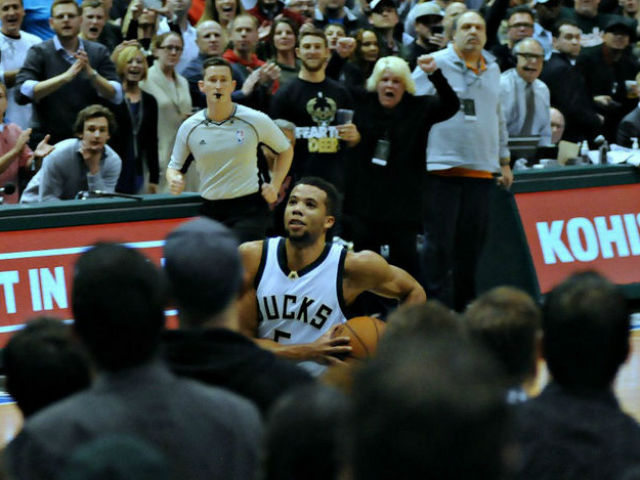 "Michael Carter-Williams getting a dunk at the end of the game and looking at our bench, like, dude you lost your spot," Green said Tuesday on Bay Area radio station KNBR. "So, it’s not quite common that you should be looking toward someone’s bench yelling. You’ve got some ground to make up."

And then Klay Thompson, who scorched the Suns with 27 points in the third quarter and had a season-high 43 for the game, added the final, piercing touch. The player who once said he thanked God every day the Bucks didn’t draft him said the rematch was "going to be fun" in Oracle Arena.

"There’s nothing wrong with the dunk, but the stare down, trying to talk nasty in the game like that," Thompson said. "And it’s like, ‘Alright, you’re going to see us next Friday and in our building, too.’

"We're looking forward to it, man. Obviously a team that gave us our one in the loss column, and we felt they could have won with a little more class."