Luckily, someone had the foresight to save the beautiful transom window from above the entrance to Washington High School. Taken out of storage, the window was recently restored and put back into an entrance facing Sherman Boulevard, thanks to the efforts of a number of people.

Luckily, someone had the foresight to save the beautiful transom window from above the entrance to Washington High School. Taken out of storage, the window was recently restored and put back into an entrance facing Sherman Boulevard, thanks to the efforts of a number of people.

The three stained glass window panels are in the southeast entrance near the school's auditorium. Enterprise Art Glass did the restoration work.

Though the glass had originally been installed above the center entrance, it was removed because of damage 54 years later and was put into storage because of high restoration costs.

"I and the Sherman Park Community Association approached MPS to see if the window could be reinstalled with protective glass," says Linda Durrenberg. "After almost a year of much checking to see if this could be done, I was given the okay back in February to have the stained glass window reinstalled.

"The restoration was done by Andrew Paremski and his staff at Enterprise, the original company that made the stained glass in 1930.  The company is 113 years old and still going strong." 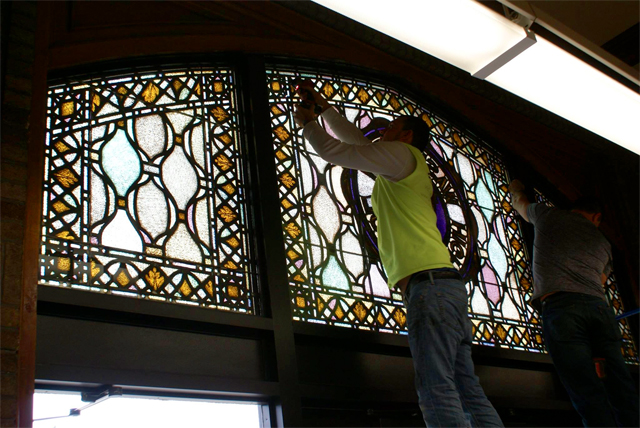 According to Durrenberg, MPS tapped Gorden Construction for the framing and protective glass. The work was completed on Oct. 21.

"Then there are the present classes into the future that will have the pleasure of seeing it from now on.  The 2016 class gave as their class gift some money to support the re-installation of this wonderful window to help students remember the true spirit of their school as the June 1930 class always wanted.  Our current principal, Valencia Carthen, and previous principal, Tonya Adair – when the project to get the window reinstalled started – gave their utmost support to have this done."

Designed by the firm of Van Ryn and DeGelleke, which did a lot of work for MPS around the dawn of the 20th century, Washington High School construction began in 1911, when the neighborhood was still rising.

In fact, pictures of the building's construction show nothing but fields to the west of the new school, which will look familiar to many Milwaukeeans because the same architects also designed Riverside and Bay View High Schools. 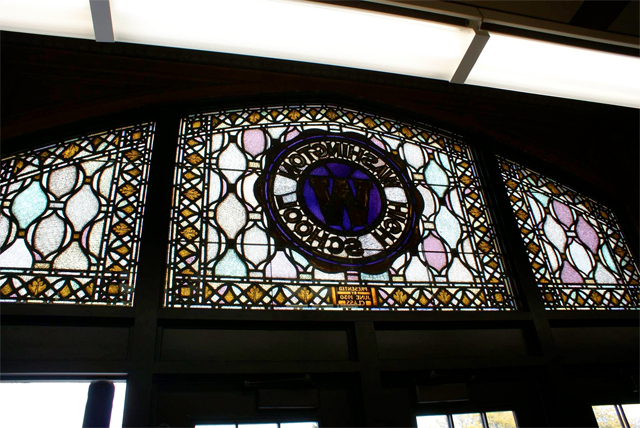 The window – designed by Munich-born muralist, painter and sculptor Carl Van Treeck, who reportedly spent two years working on a design – was a gift to the school from the June 1930 graduating glass – as is noted in a small box in the center of the window at the bottom.

"In the beautiful window the wishes of the June class of 1930 have been brought to an artistic realization," wrote 1930 class president Howard Schneider in a note to the school principal George Balzer, according to a news report of the day. "Although the class has been dispersed, this window will serve as a permanent reminder of mutual bonds, in addition to the purpose for which it was originally tendered: that this window be a symbol and outward sign to those who pass that here lives the true Washington spirit."