This has to be the best local headline of the year: "Reports of people dressed as clowns raise concern in Waukesha." But it's for real: Clowns are running around Waukesha and causing a stir.

This has to be the best local headline of the year: "Reports of people dressed as clowns raise concern in Waukesha." That headline ran in the Milwaukee Journal Sentinel on Tuesday.

It’s for real. Clowns are running around Waukesha.

First, it was reported that a clown was spotted lurking around Carroll University. Sometimes this clown stands in the dark and stares at people. Someone caught a grainy photo of him standing on a corner in an orange jumpsuit in the dark. Police then said it was a teenage youth who is developmentally disabled. The youth’s mother denied that in a Fox 6 report, and she said her son does this to make people laugh. She said he’s only allowed to perform as a clown outside her house.

What? No, lady, he’s scaring people, so get him some help. And back in the house. Parents these days!

Then, the news media reported that there have been MORE reports of clowns in Waukesha who are not this woman’s son.

And, no, they are not Donald Trump or Hillary Clinton.

Police also told the media that it’s not illegal to stand on street corners dressed as a clown. It’s a free country, after all. Of course, the police deal with clowns all the time, so this is nothing new for them. It’s really safe in Waukesha, by the way; the police have time to respond to clown calls.

It’s a good thing it’s not illegal to walk around town as a clown. Otherwise, there’d be no one running for president. In Milwaukee, people get the Milverine and Tom Barrett. We get this guy.

Waukesha residents are buzzing about a "clown" spotted around town at night in recent days. #WISN12 at 10. pic.twitter.com/dpGdb1IqS0

No, not Nick Bohr. The clown.

No one knows the identity of the new copycat Waukesha clowns. However, there was supposedly an all-white clown, and there was also a green Jester that stood around waving. Police reportedly tracked the Jester’s footprints, but they led nowhere. Yes, in Waukesha, the cops have time to investigate clown sightings by tracking their footprints.

It is literally impossible to make a story this great up – unless you live near the clowns. Then, I admit, you would have a right to be freaked out. The clowns should knock it off. They are scaring people. People don’t really like clowns. Most people remember that John Wayne Gacy was a clown (although there doesn’t appear to be truth to rumors sex offenders are dressing up as Waukesha clowns). Usually you see Waukesha clowns at bar time.

Waukesha is always a little bit late when it comes to trends. In 2013, a "creepy Northampton clown" was reportedly terrifying residents in England. The clown looked like Pennywise, a creepy clown from a Stephen King movie. This clown would stand on a street corner and once even knocked on a person’s door, offering to paint their window sills. What? That clown even earned his own Twitter handle: #northamptonclown. The clown was later unmasked as a 22-year old guy named Alex Powell. Couldn’t he have been someone more interesting?

There have been plenty of other sightings too across the nation and the globe. Google "clown craze," and you get lots of stories of clowns terrorizing this community or that. Who knew it was a national epidemic. Scratch that. It's an international one.

In Florida, someone captured a clown smashing a pumpkin on camera. The story reported that, "clowning is already quite the craze in California. It started with a photography project, and the pictures have gone viral. Creepy comics are terrorizing some people and humoring others as they pose in front of monuments and prowl the streets. Now the mysterious behavior is spreading."

As that report noted, creepy clowns were seen roaming around various California towns, such as Bakersfield. It became a social media craze.
In 2014, the UK Daily Mail reported that evil looking clowns were terrorizing children throughout Europe, especially in France and Great Britain, calling the phenomenon "the face of a disturbing new trend sweeping America and Europe: clown terror attacks inspired by US serial killer Twisty the Clown."

So be thankful the Waukesha clown isn’t even offering to paint everyone’s window sills. Yet.

Which one, Jordan, which one?

This clown in Waukesha is ruining my life — Jordan Mathusek (@JordanMathusek) November 24, 2015

Even the clown is being politicized!

In Milwaukee, people get upset over drug dealers on street corners. In Waukesha, clowns are their biggest problem https://t.co/G04NAyJCz9 — Nick Schweitzer (@NickSchweitzer) November 24, 2015

We don’t get it either, Lexie. You’d have to be a clown to understand.

why does one find it fun to dress up as a clown and stay in downtown Waukesha I don't understand :-/ — Lexie Wendt (@lexie_wendtt) November 24, 2015

Note the date on this one:

Just woke up from a dream that I got taken by the clown guy in Waukesha. Well good thing he's, actually, behind bars. — Emilie (@EmilieMenges) November 9, 2013

Look at the date on this one too.

Looks like Waukesha has always had a problem with clowns.

What is the world coming to these days? Can’t people control their kids? 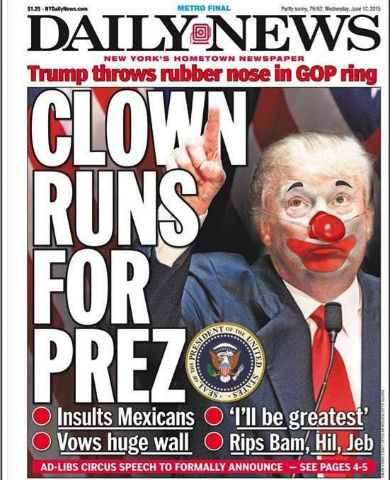 Houdini was better at magic than cycling

Election will be turning point for Waukesha water