The Wave announced its 22-game 2017-18 schedule, and an exciting event at the regular-season opener, featuring one of local soccer's biggest names, will surely stand out to longtime fans. Before its home game against Cedar Rapids, the team will honor Keith Tozer with a banner-raising ceremony.

The Milwaukee Wave announced its 22-game 2017-18 schedule, and an exciting event at the regular-season opener, featuring one of local soccer’s biggest names, will surely stand out to longtime fans.

The Wave will open its 34th season of professional indoor soccer – its fourth in the Major Arena Soccer League – at home against the Cedar Rapids Rampage on Nov. 4. Before that game, which kicks off at 6:05 p.m. at the UW-Milwaukee Panther Arena, the team will recognize legendary head coach Keith Tozer with a banner-raising dedication ceremony.

It’s believed to be the first public reunion between the Wave and its popular former leader since the two sides parted ways in March 2014, after 22 seasons together. About a month later, the Wave changed ownership from Sue Black, who was in charge when the club moved on from Tozer, to Mike Zimmerman, who’s been the majority owner since then. Under Tozer, Milwaukee had 528-282 overall record, including playoffs, and won six championships. 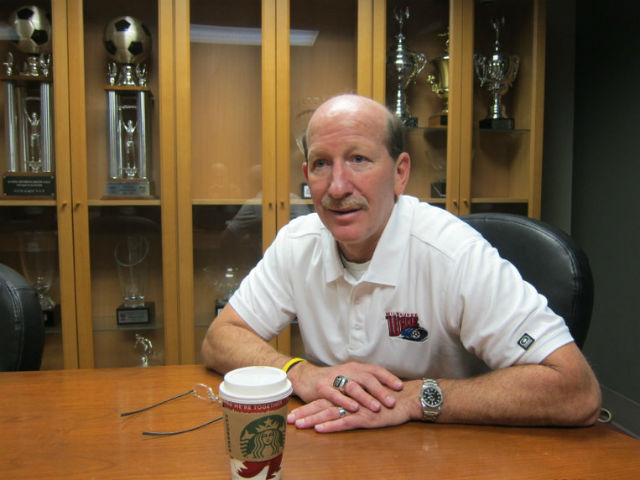 The Wave – founded in 1984 and the oldest continuously operating professional soccer team in the U.S. – has not returned to the league finals since Tozer left, but indoor games have continued to be some of the best-value, family-friendly entertainment in the city.

"We are all looking forward to bringing everyone a memorable season, on and off the field," said Milwaukee Wave General Manager Dan Kuenzi.  "The tradition of our fans meeting the players and coaches after every game for free autographs will continue, win or lose.

"We’ll also have some exciting and interactive game themes, promotions and giveaways, which we will announce socially this Thursday."

The MASL recently announced its divisional and conference alignments for the 2017-18 season and said last week in a statement that it "has taken measures to stabilize and grow the league." In its fourth year, the MASL will comprise 16 teams across four divisions, split into two conferences. One more club is expected to join next season and at least eight teams are currently in the newly formed MASL2.

The Wave is once again in the Eastern Conference Central Division, along with the Rampage, Kansas City Comets and St. Louis Ambush. The Chicago Mustangs, a member of the division last year, elected to compete this season in the MASL2, a developmental league. In 2016-17, Milwaukee went 13-7 in the regular season, finishing second to Kansas City in the division, and advanced to the Conference Final, where they lost to the rival Baltimore Blast in a thrilling mini-game 3 at the Panther Arena.

"Last season, our fans saw some great matchups and exciting games that fed into one of the most exciting playoff tournaments in recent memory," said commissioner Joshua Schaub. "This schedule could be even better."

The MASL’s playoff format will feature the top two teams in each division in a Division Playoff. The Division Playoff will be a two game, home and home series. If necessary, Game 3 (a mini-game) will be played immediately following Game 2. The Conference Championship will be one game, hosted by the team with best regular season record. And, for the first time, the MASL Championship will also be a one game playoff hosted by the team with the best regular season record.

Tickets for all Milwaukee home games go on sale Friday at noon.

The Wave has had an eventful September. Two weeks ago, the club added Marcio Leite to the 2017-18 coaching staff. The fan favorite will join head coach Giuliano Oliviero and assistant Marcelo Fontana as a player-coach. On Sept. 21, veteran goalkeeper Nick Vorberg announced his retirement after 14 seasons with Milwaukee.

The Wave, which last weekend held open tryouts, begin the preseason on Oct. 19.

For more information on the team and for tickets, click here.

After playoff sweep, Wave is one win away from league championship game

Everything you need to know for Wave's do-or-die playoff game tonight vs. Blast