When I learned that the 1901 Wells Street Bridge House was in someone's near South Side Milwaukee backyard, I went looking for it. I found the old shed but also much, much more thanks to the proud and amiable owner, Jeff Hicks.

A capital from the Layton Art Gallery.

Walls of stone mined from the old T. A. Chapman’s department store on Wisconsin Avenue.

A stone slab from a demolished structure on 12th and Walnut.

Wooden sills from the Blatz warehouse on Juneau.

Cedar door frames that came from the Goldsmith Building.

Other discarded bits and bobs salvaged from St. Francis of Assisi on 4th Street and the First Baptist Church on Marshall and Ogden, lost to fire.

It reads like the inventory of a Milwaukee architecture museum.

Instead, it’s a description of some of the materials that Jeff Hicks used to build the stunning, almost medieval-looking chapel in his near South Side Milwaukee backyard. 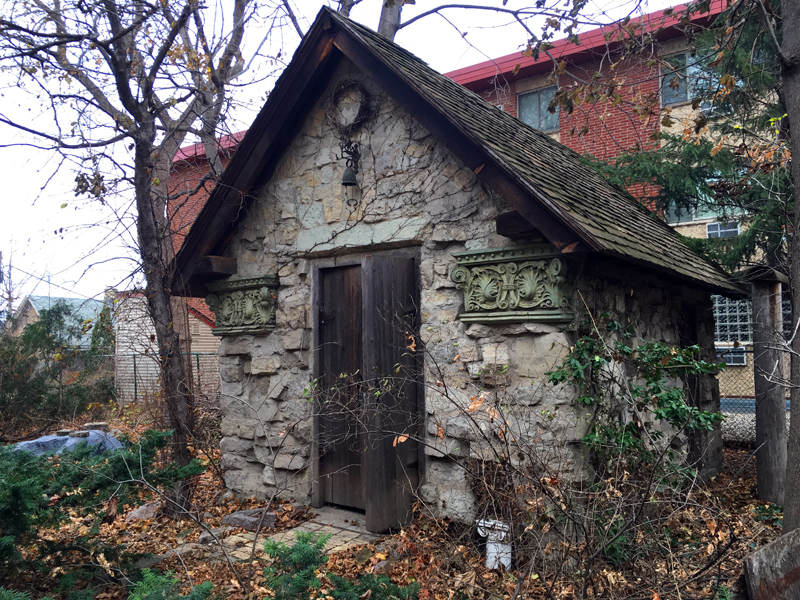 But that’s not all. Before you get to the chapel, you have to pass the 1901 bridge keeper’s house removed from the Wells Street Bridge when the span was replaced in 1984-85.

Recently, while scouring newspapers online searching for something else, I stumbled across a February 1984 photo of a Kramer Construction crew using a crane to load the old bridge tender's building onto a truck.

"The shack has been bought by John Paul, a Milwaukee artist, who plans to use it as a studio and gallery," the caption read.

A year later, the Journal reported that the bridge house had been installed in Jean-Paul Ranieri’s backyard, atop a foundation built by his house mate Jeffrey Hicks.

That newspaper report noted that Ranieri initially paid a dollar for the shed, but ultimately ended up spending a larger, undisclosed amount to buy it. 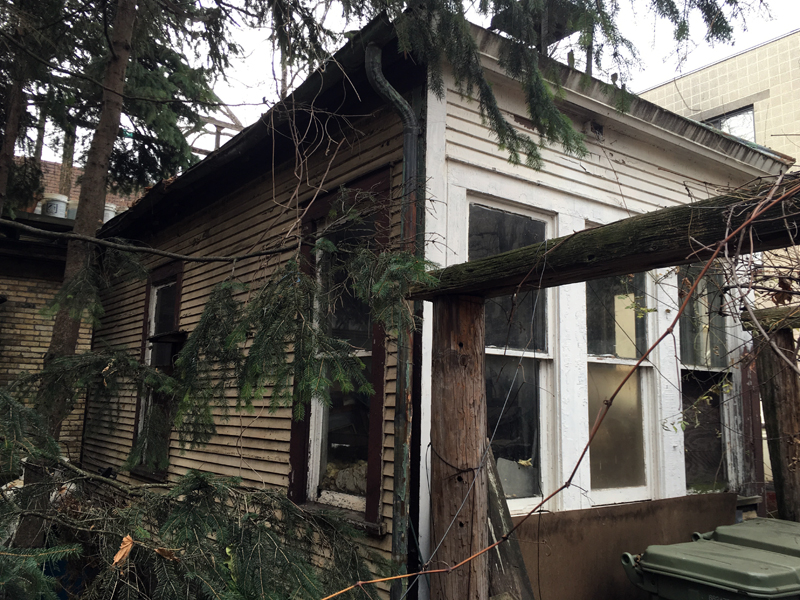 "’How much for the house?’ Ranieri asked the crew and offered the wreckers $1 for it," The Journal wrote. "The dollar turned out to be a down payment, although Ranieri wouldn’t say how much more was needed to complete the deal. But he did say that one of the conditions of the sale was that the house be moved by the next Monday. Moving the house cost $900."

Not included in the price was the original bell, which the city kept. Hicks and Ranieri installed a new one.

Curiosity piqued, I dug up the address and drove over to see if I could tell from the sidewalk whether or not the bridge house was there (trees obscure the backyard on Google Maps).

Hicks was in the driveway when I arrived, and he kindly indulged my interest by showing me, first, the bridge house, which still has its street number sign (101) from its Wells Street days (to respect Hicks’ privacy, I’m omitting the address here). 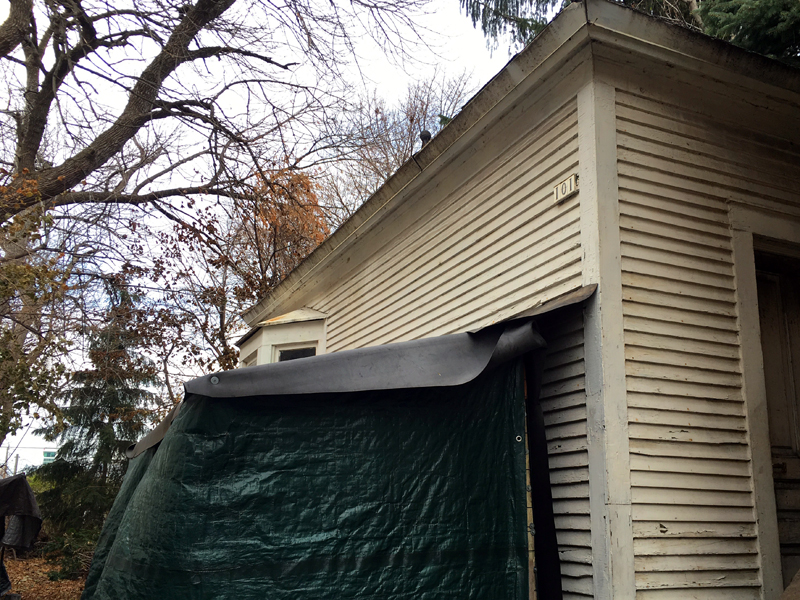 Hicks recounted the story, showing me the four concrete piers he poured to support the structure, which apparently still has remnants of the old bridge controls inside.

He and Ranieri researched the original colors of the structure and repainted it beige with brown trim to match. While the base color has faded over the years, you can still see the darker window trim on one side.

The bridge tender’s house sits behind a gorgeous and historic old cream city brick house that, like many, has changed shape and size over the years.

While the Wisconsin Historical Society’s Architectural Inventory dates the home to 1868, Hicks tells the story of it, showing me where additions were made, more than a century ago. His research suggests the oldest part of the house dates as far back as the 1840s, with additions perhaps around that 1868 date (by the cream city brickmaker George Burnham, who arrived in Milwaukee in 1843), and another addition, in the back, in 1901.

It’s a lovely, modest Italianate place with arched windows, shutters (real ones, not simply decorative) and bits of gingerbread here and there. You can see traces of a later Victorian-style porch that's come down.

It’s heated by wood stoves, so Hicks, 75, stays fit by working hard to keep his yard stocked with firewood. 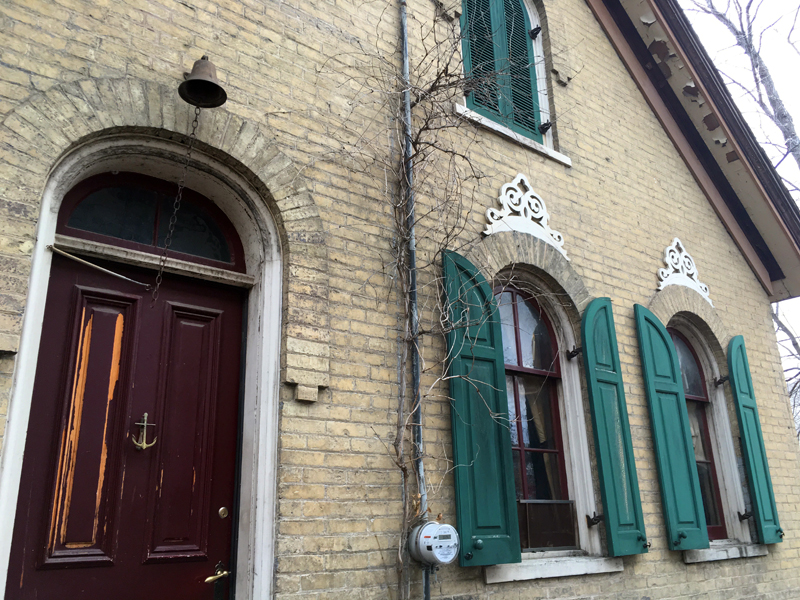 A 1985 city historic designation report suggests the house dates to 1874-75 – though the construction date is officially listed as "undetermined" – and that it is "an example of the modest single-family housing built by the prosperous working class during the Victorian era. It exhibits good craftsmanship and displays the proportions and detailing typical of Italianate cottage architecture. The owners have restored such handsome period features as the arched window sash and the wood shingle roof."

The report claims that the home was built by Frederick Zube, who, at the time worked at the Burnham Brickyard, which was within walking distance in the Valley.

Back at the house, as the amiable Hicks and I talk, I see the chapel and Hicks is eager to tell me about it. And rightly so. It’s beautiful and, with the help of a few others, he built it himself – from those pieces listed above and others – over the course of a few years in the first half of the 1980s. Definitely something to be proud of.

One of his collaborators was Ranieri, who Hicks met while working as a theater rigger in New York in the 1970s. Later, back in Milwaukee, Hicks was working as master of properties at the Milwaukee Rep and Ranieri began doing good deeds, including providing shelter to the homeless and preaching at bars. 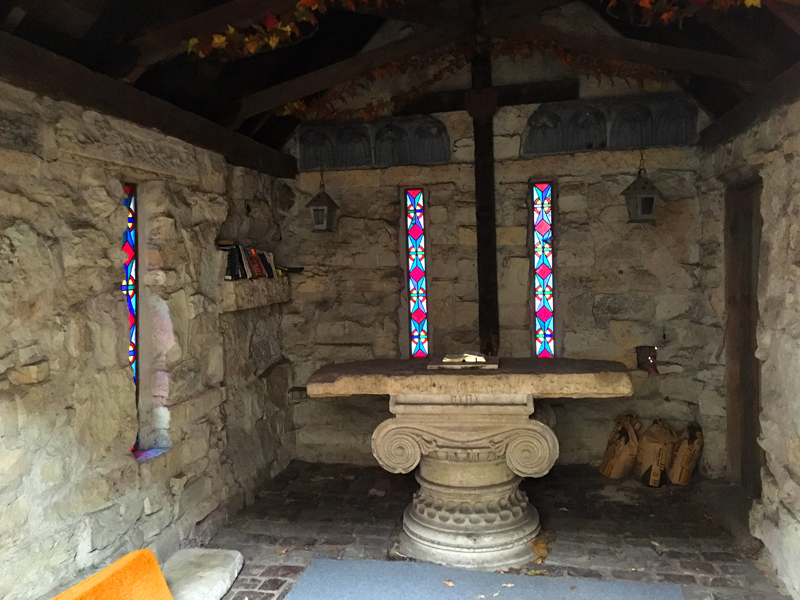 Ranieri briefly made the papers after Jeffrey Dahmer’s arrest, because he had seen Dahmer in bars and was suspicious, warning potential prey to steer clear. A newspaper article of the era called Ranieri "an unlikely saint in sinner’s garb," discussing his own struggles with addiction as well as his work in the community.

In 1983, Ranieri went to Rome and shook the hand of Pope John Paul II in St. Peter’s Square. Back in Milwaukee a few weeks later, the Sentinel declared, "Pope gives his blessing to city man’s Gospel life." 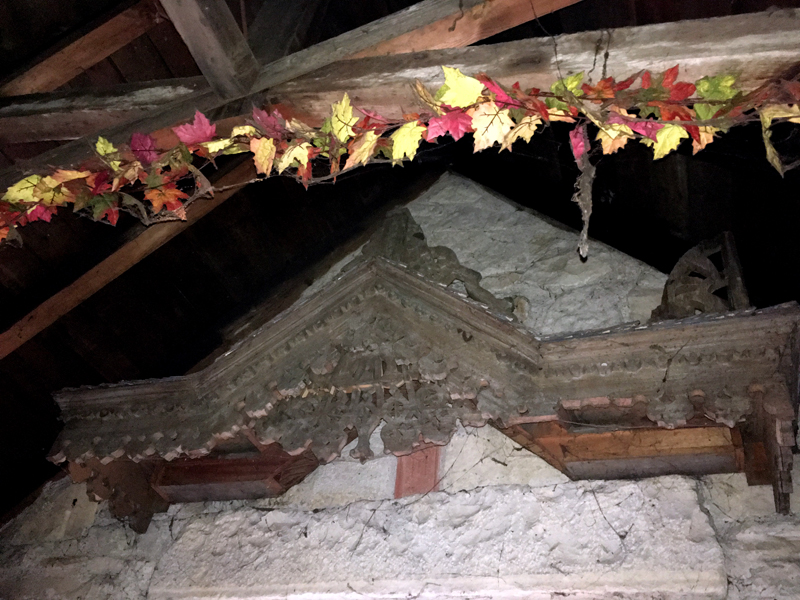 Anyway, Hicks and Ranieri began collecting materials and building their chapel, which has long, narrow vertical stained glass windows from a local art glass studio, as well as heavy stone benches and a bookshelf, near the altar, built right into the walls.

Above the entrance, believe it or not, is a stone lintel that the pair acquired from St. Peter’s Basilica in Rome (see photo above). It apparently came from the Holy Door the Pope opens each Jubilee year, and Hicks says there’s a certificate of authenticity installed in the chapel wall next to the stone. The Holy Door was opened for the Jubilee in 1983, the year Ranieri met the Pope at the Vatican. 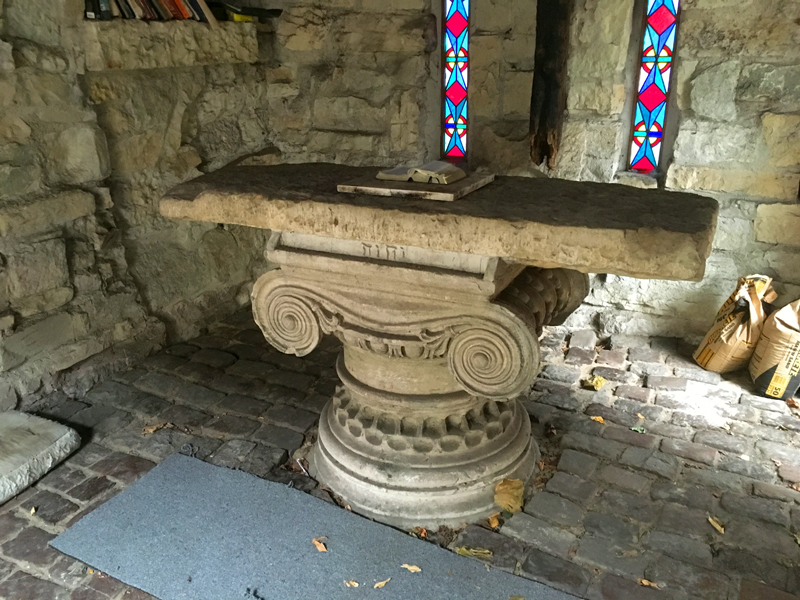 Especially interesting is the wooden support structure for the roof, which Hicks said he planned and executed himself, thanks to skills he learned when he studied at Milwaukee School of Engineering.

The chapel is a peaceful haven in a bustling neighborhood. It is contemplative and charming. The Hebrew for "Jehovah" is carved into the altar of the rustic chapel, which is one of the most beautiful things I’ve run across in this town full of lovely architecture.