Two years after the legendary White House tavern closed in Bay View, a couple is reopening the 1890 Queen Anne building as a fine dining restaurant.

If you need proof that dreams do come true, look no further than the new restaurant located in the former Kneisler’s White House tavern at 2900 S. Kinnickinnic Ave. in Bay View.

Also called the White House, the fine dining restaurant – which officially opens (softly) Friday at 4 p.m. – is the realization of the dream of two long-serving hospitality professionals, Allison Meinhardt and Zachary Byrne, who met while working at Mader’s.

"I first set eyes on the building the first time it was for sale (early 2017)," says Meinhardt, standing amid tables covered in white tablecloths in the same barroom where William Kneisler began slinging lager in 1891. "We didn’t have the money." 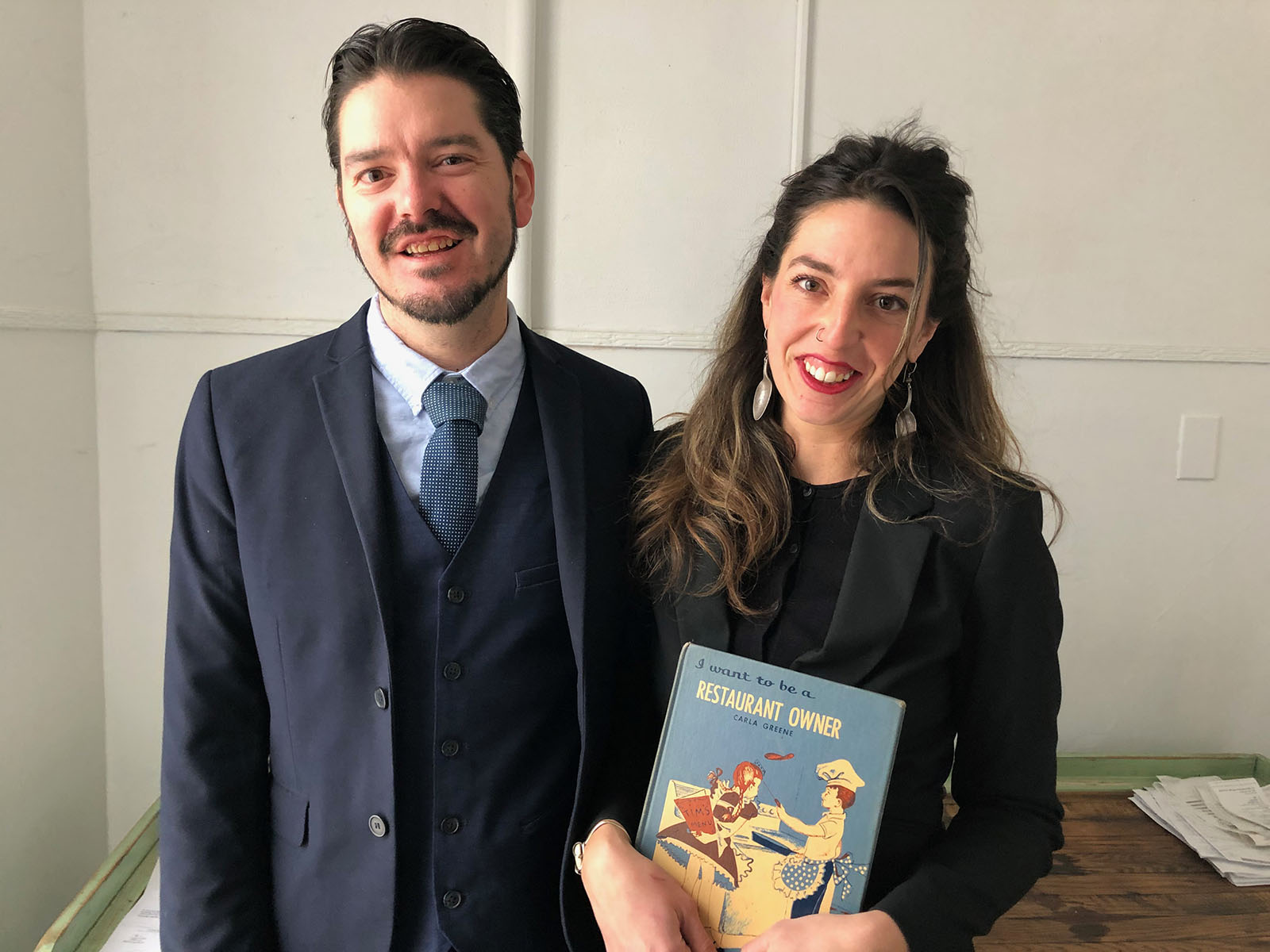 After living briefly in Costa Rica, Meinhardt and Byrne bought a house on nearby Clement Avenue and expended a lot of energy renovating that. Then, the White House went back on the market.

"We were (on Clement) for a year and eight months," recalls Meinhardt, "when this came up for sale. We quickly listed (the house), because we needed the money to purchase this place."

They closed on the gorgeous, if needy, Queen Anne old Schlitz tied house at the start of July, moved into the former saloonkeeper’s apartment upstairs and set about converting it into a restaurant, along with fellow now-former Mader’s employees Grant Jahnke – who is manager of operations – and executive chef Robert Tringali.

What they didn’t realize is just how much money they’d need. No one said dreams are easy. 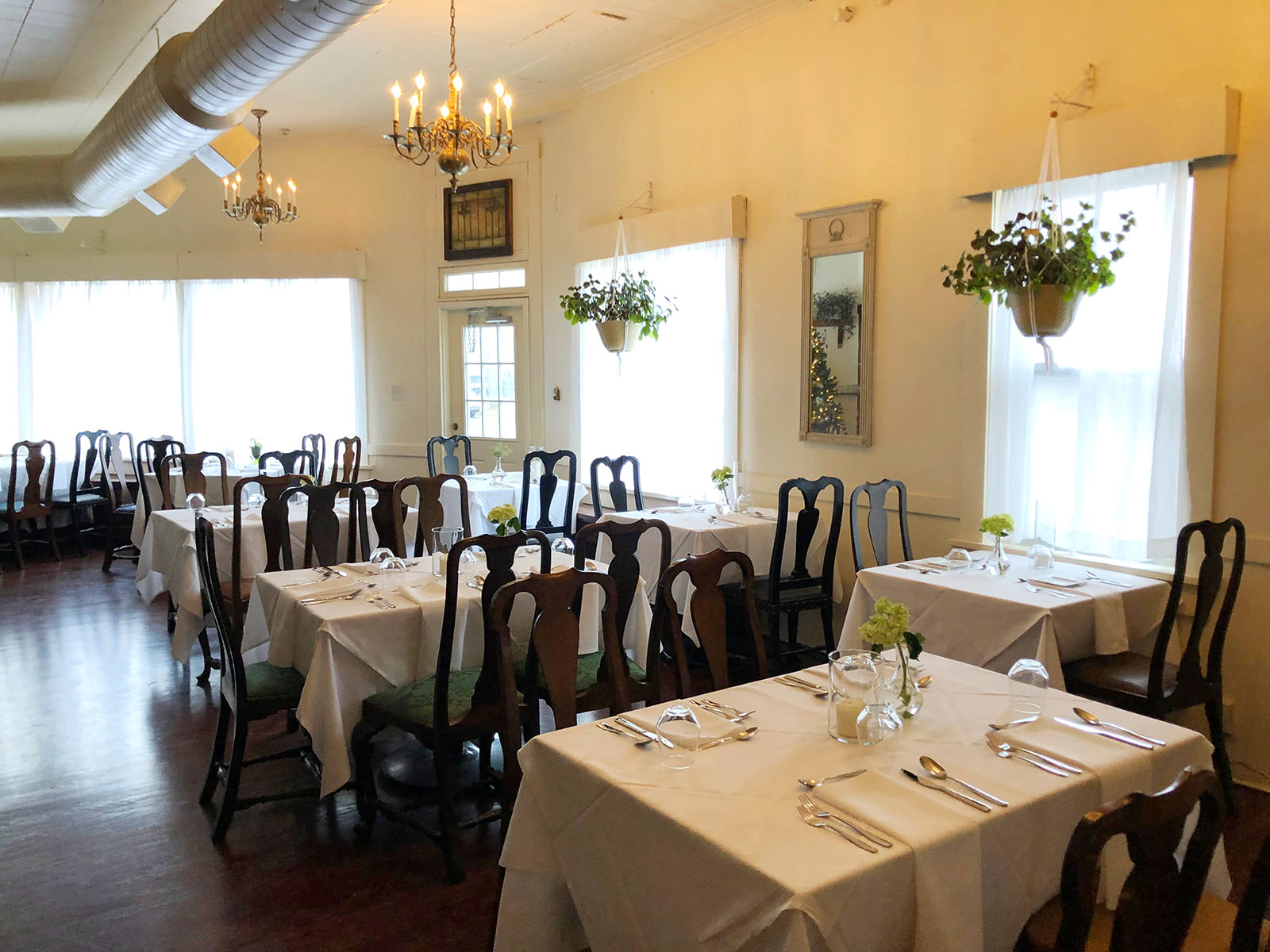 "The renovations were so extensive," says Meinhardt. "We started on the 4th of July with the upstairs; it was in very poor condition. First we did the walls and the ceilings, mending and patching. We tore out the carpeting. The kitchen was taken out. Then we refinished all the floors.

"Once we finished with the apartment we moved down here. We painted first, patched. Then the lighting went in. Then we (re)did the floors. The kitchen buildout was happening at the same time."

They added chandeliers dating to the 1940s, acquired at Antiques on Pierce. 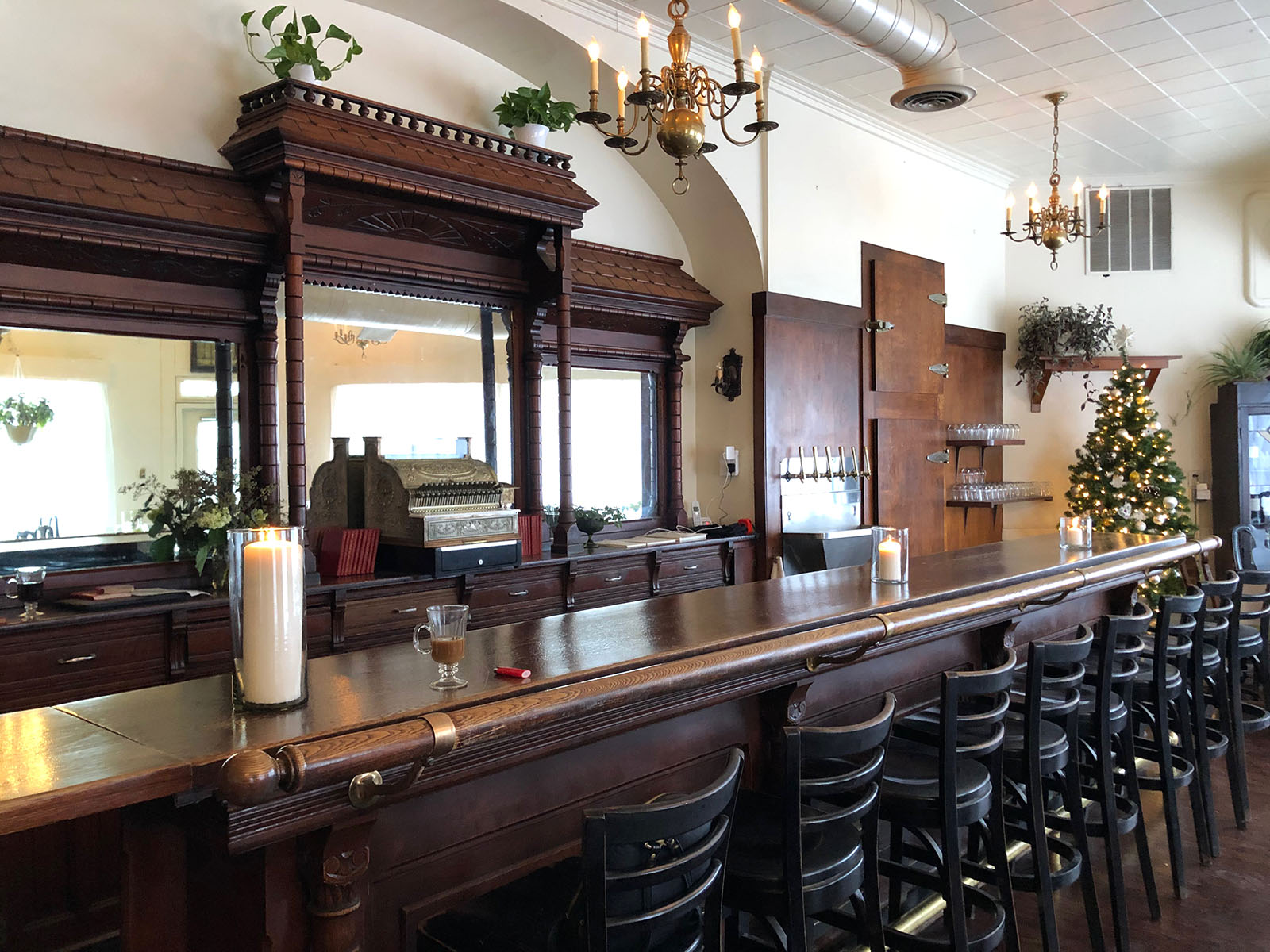 Don’t worry, longtime White House lovers, the 1890 bar, the wainscoting, the vintage photographs, the original ceiling in the parlor ... it’s all still there. This is the White House you remember from before it closed at the end of 2017.

(You can read a deep dive into the White House's history in this Urban Spelunking article.)

Then, almost as an aside, Meinhardt says, "We did have a little incident," and leads me to the basement.

As we descend, she says, "Do you remember all the heavy rain? It’s a cream city brick foundation. Zachary and I were out one night and we came home ..." 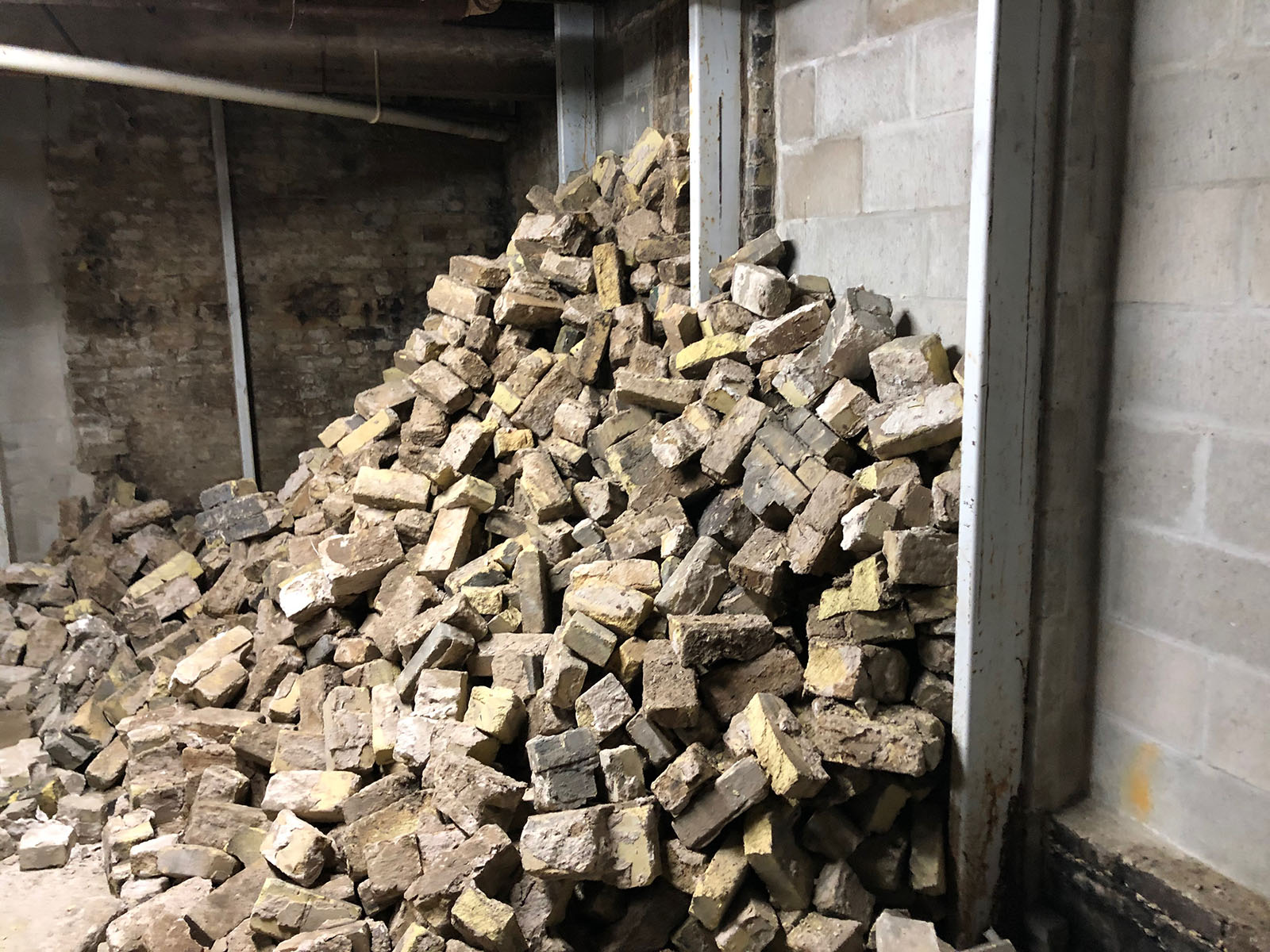 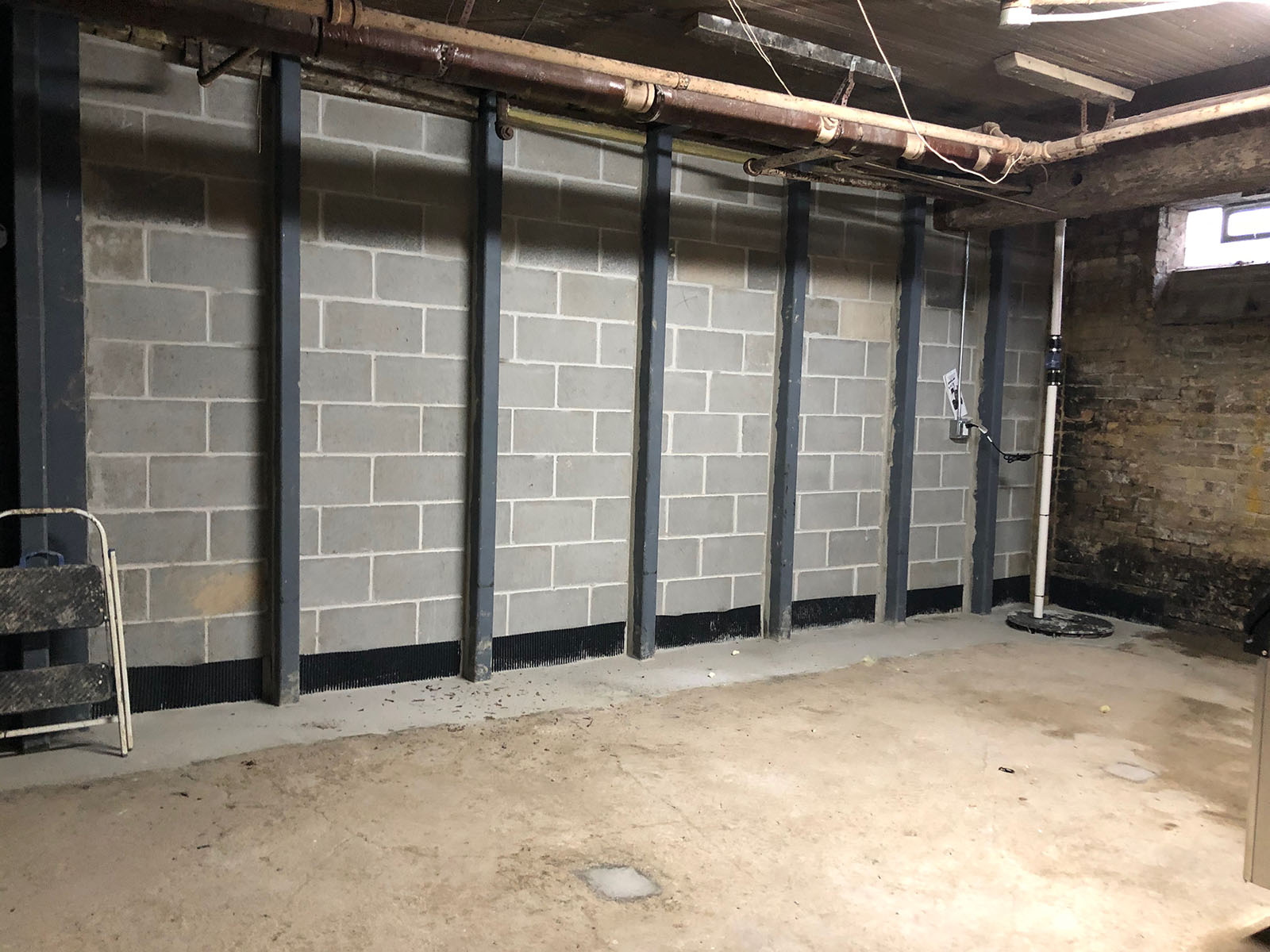 Then I see it. A huge pile of cream city brick, and where the north wall of the basement once stood, a new one in block with steel vertical supports.

"It was a gaping hole and you could actually look out onto the sidewalk," says Meinhardt. "This set us back four weeks, but it’s all sorted out now. We’re going to use all the cream city brick to landscape outside."

"All things considered, better to have it happen before," adds Jahnke, "rather than when we’re open and then the first week it happens."

Perhaps inspired by the blood, sweat and tears – and cold hard cash – they’ve invested in the building, Meinhardt and Byrne adore the place, and though they’re ready for the public, they’re not done with renovations. 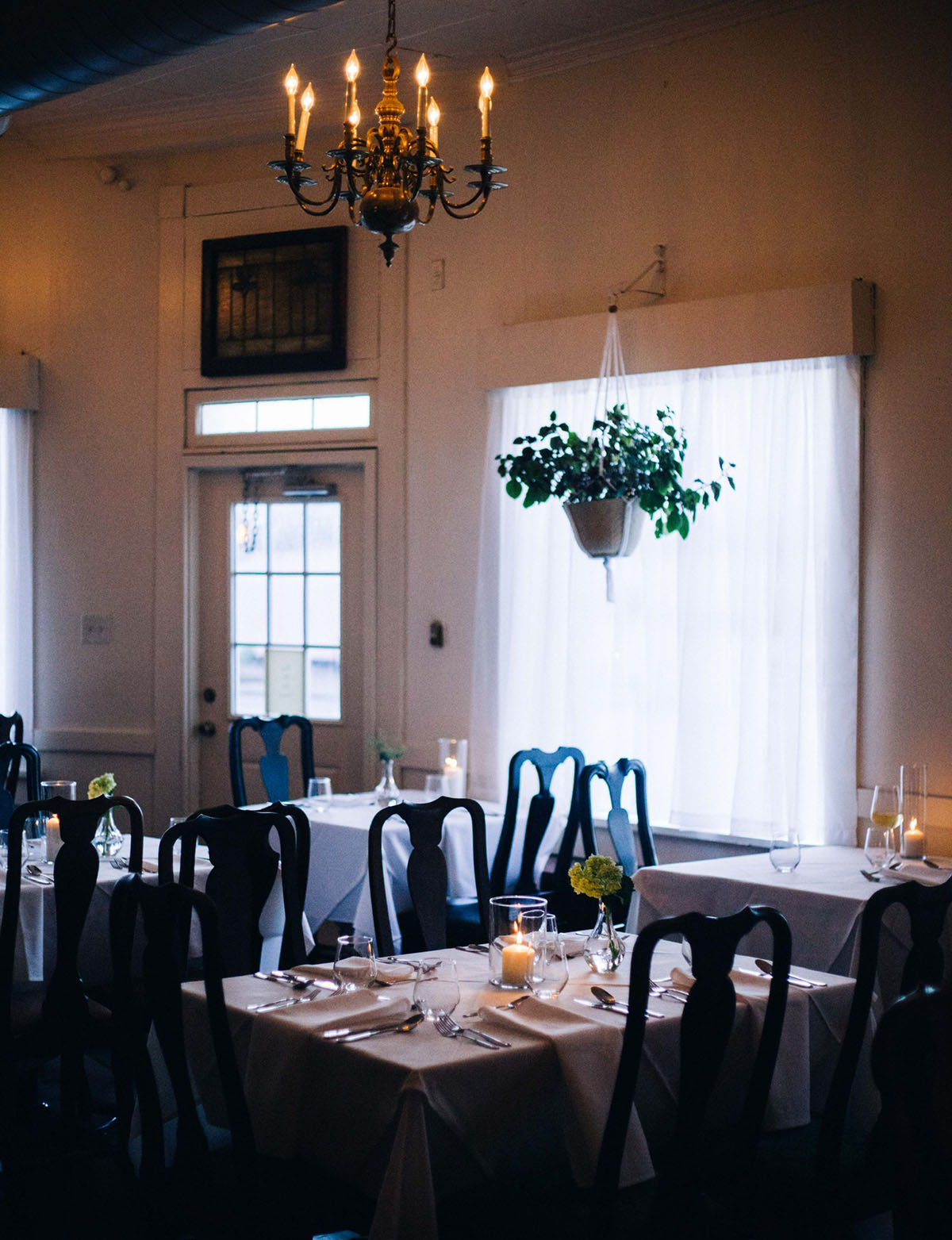 "I want to bring back the double door," Meinhardt says of the main entrance, as we look at a vintage photo of the White House, provided by the great-great-granddaughter of William and Wilhelmina Kneisler.

They would like to also reopen the two other doors that have long been covered over, too – one leading into the dining room and the other leading up to the apartment – and restore the ceiling in the main room, using the one in the ladies’ parlor at the back as a guide.

"It’s going to be an ongoing project for years and years," says Byrne. 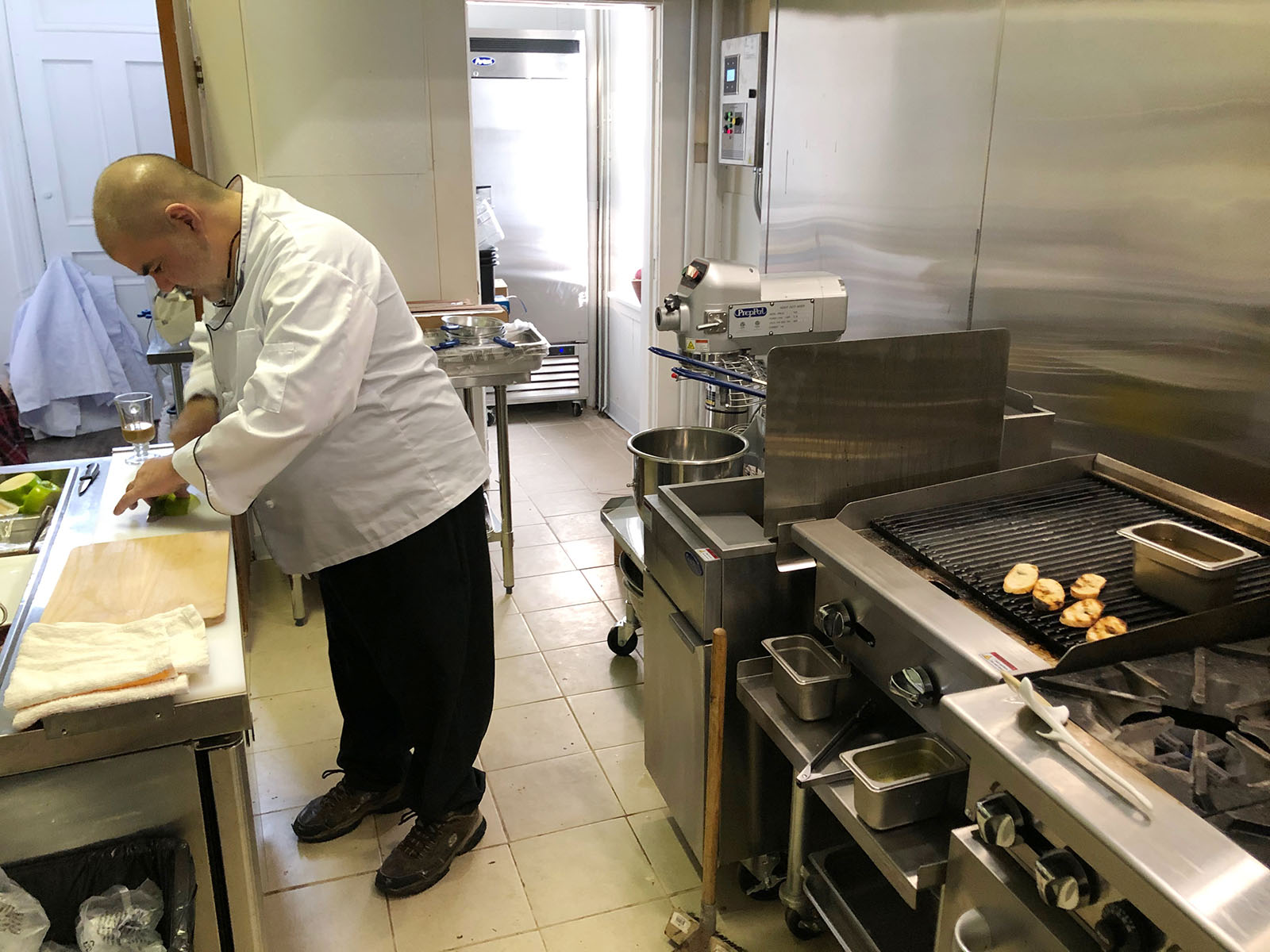 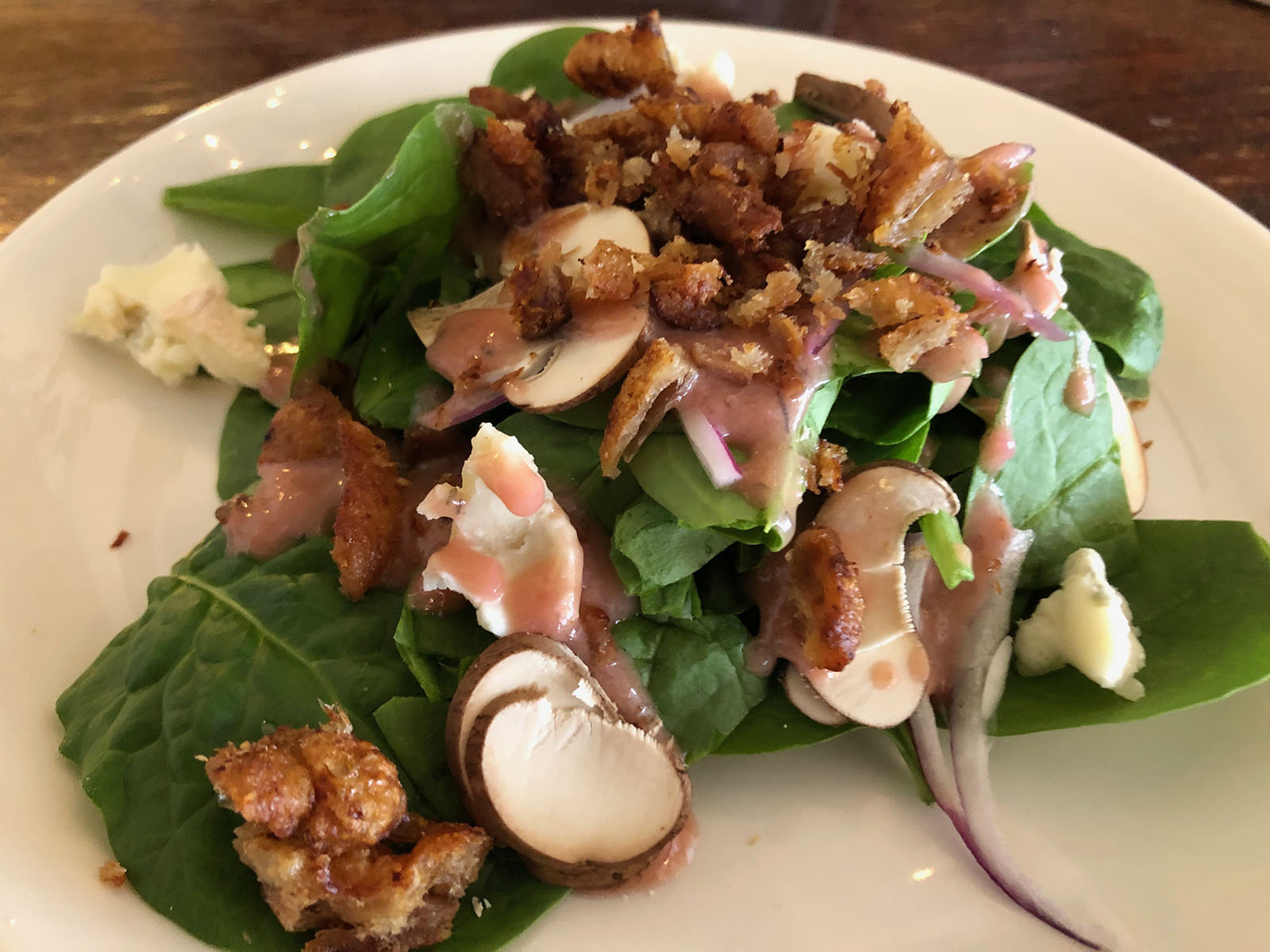 Back upstairs, Tringali brings out a few appetizers for us to taste, including a spinach salad with crispy duck cracklings, a board with toasted baguette, pickles, mustard and a sinfully rich and delicious chicken liver pate (secret ingredient: chartreuse liqueur!) and a baked brie with apples, almonds and compote.

The dishes reflect the chef’s varied experience working at a number of supper clubs and resorts in the area, at restaurants in Chicago, as well as at Mader’s for the past five years. 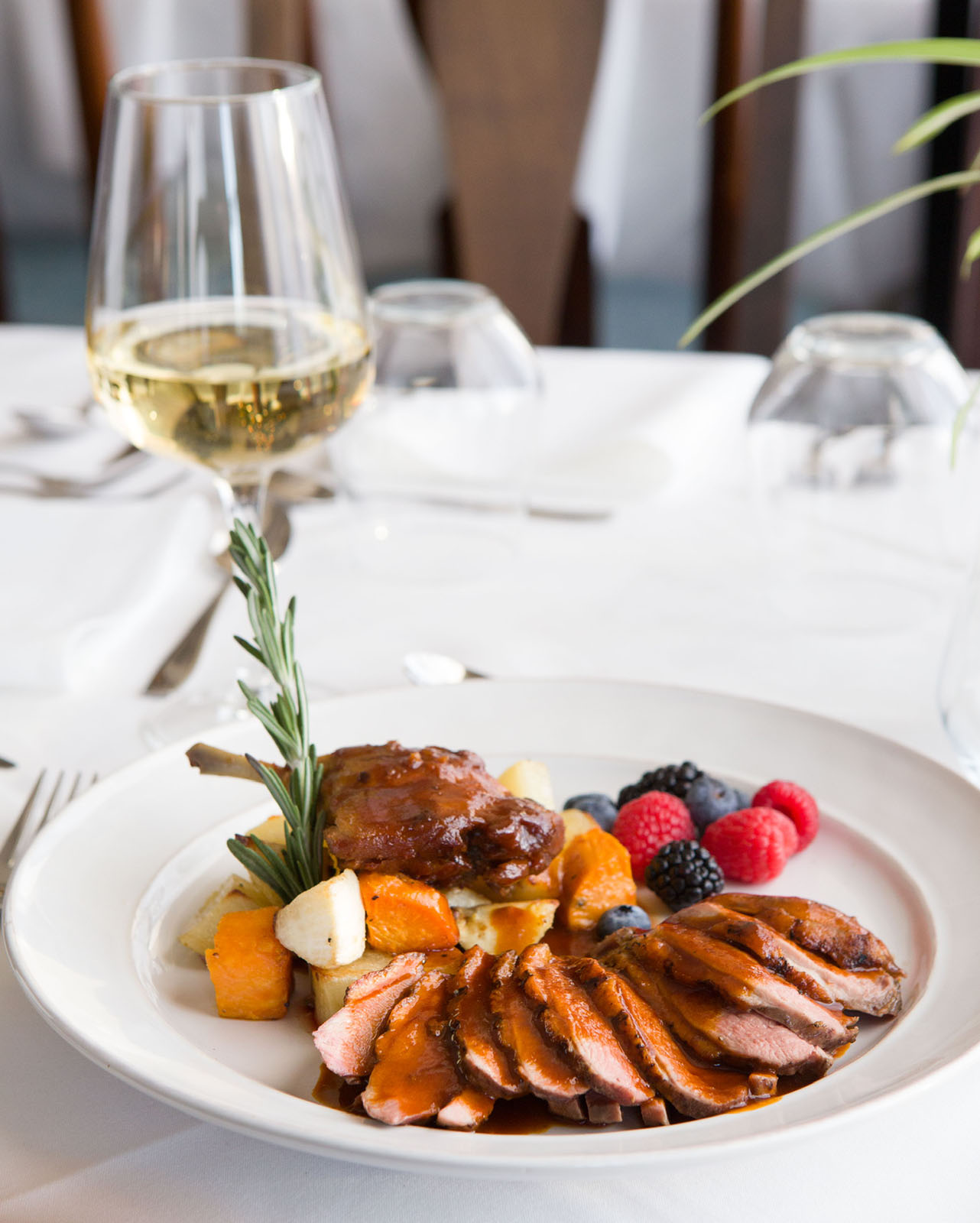 "It’s fine dining in the European style. Chef Robert is the most talented culinarian I’ve ever met," says Meinhardt, who points out that the chef is Italian, she’s German and Byrne is Irish, "so the menu is a little bit of everything."

The restaurant will be open from 4 until 10 p.m. daily except Tuesdays.

"I’d like to introduce brunch almost immediately," Meinhardt adds. "I think come spring we’ll do brunch on Saturday and Sunday. I think it would be really lovely."

The dining room seats 50, including at the bar, and a patio, in season, will add 40 more seats, with room to expand. The parlor will serve as a cocktail lounge and small party space. 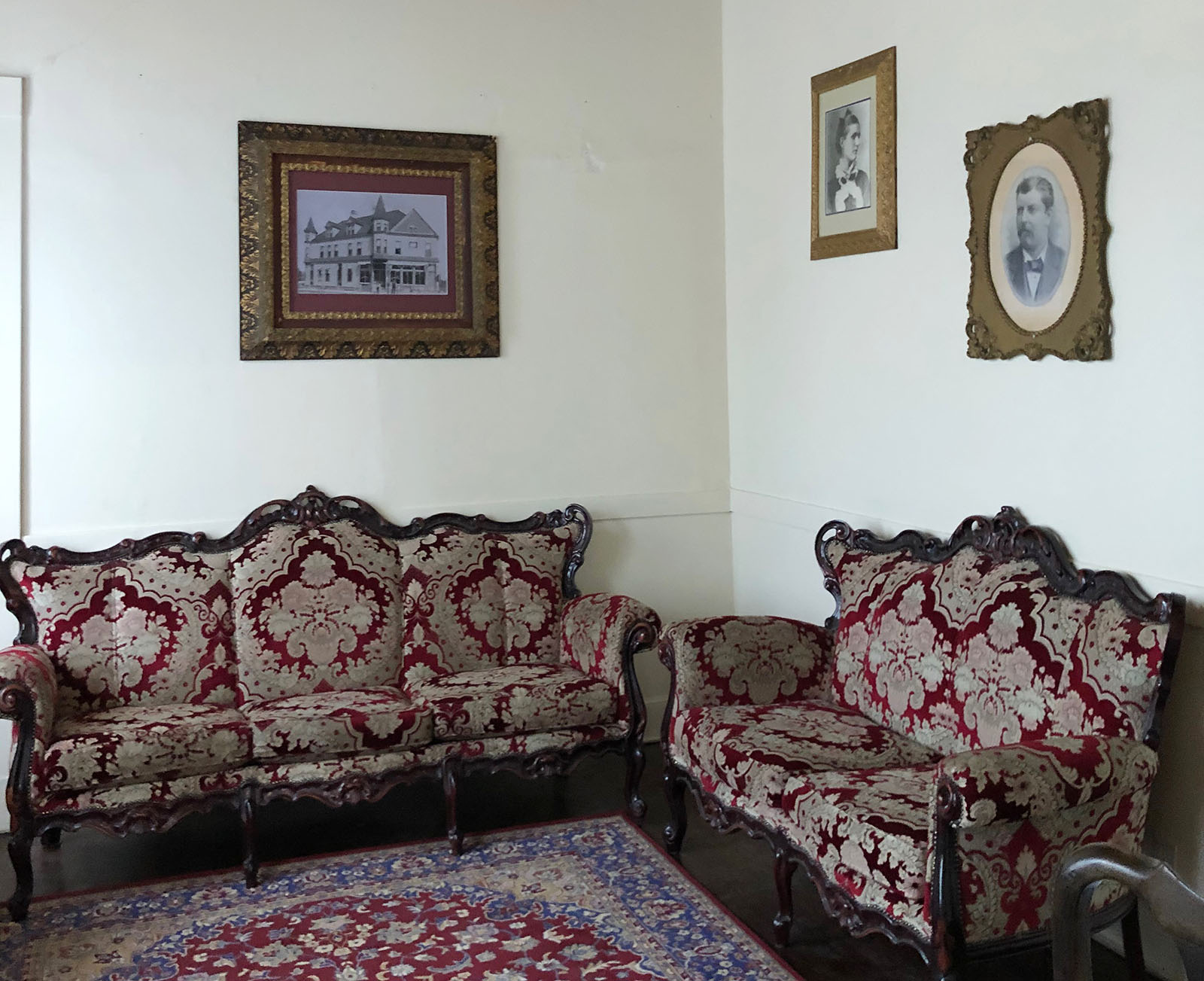 Despite all the work and the unexpected detours, Meinhardt has no regrets about taking on the White House.

"It’s like this," she says. "I looked at the building two years ago. I was out front. I stopped and I felt truly and genuinely, as decrepit as it was, that the building wanted me; that I was the right person for this building.

"That’s how I feel in my heart – that this building wanted our love. The fact that it sat so long ... I don’t think everyone could see past what it was. Everyone I spoke to about this said, ‘you’re out of your mind.’ (Zachary) told me to walk away, too."

Byrne does not deny it.

"But come hell or high water I had to have it," says Meinhardt. "It’s really, really exciting. We’re ready."