Wild foraged items, classical culinary training and a deep respect for nature are about to converge at Wild Roots, the forthcoming restaurant at 6807 W. Becher St. in West Allis.

Wild foraged items, classical culinary training and a deep respect for nature are about to converge at Wild Roots, the forthcoming restaurant at 6807 W. Becher St. in West Allis.

In fact, if all goes well, the restaurant will be ready for its public debut on Tuesday, March 12.

Wild Roots is a partnership between Thi Cao, former executive chef at Buckley's and Bryan De Stefanis, owner of Big City Greens, a local purveyor of heirloom vegetables, herbs, microgreens and foraged wild edibles and Sourced in Nature, a prepared foods company using ingredients from his 15-acre farm in Tigerton in Shawano County.

Among the staff the two partners have hired to operate the restaurant are industry veterans Meg Grendz and Aaron Goldberg, both of whom will handle aspects of front of house management.

Initially, the restaurant will open for lunch and brunch only; but Cao says he anticipates being able to offer dinner service in a matter of weeks (his goal, he says, is to be fully operational by the end of March).

"Everything about this place is personal," says Cao, looking around the restaurant. "It’s personal to me and to Bryan ... from the color scheme and textures to the items hanging on the walls. Everything has been thought out. It’s intentional."

That includes an earthy palette of vibrant mossy greens and slate greys complemented by both warm and cool wood tones. It also includes natural elements: an apple bough, for instance, hung like art above a four-top table near the kitchen. 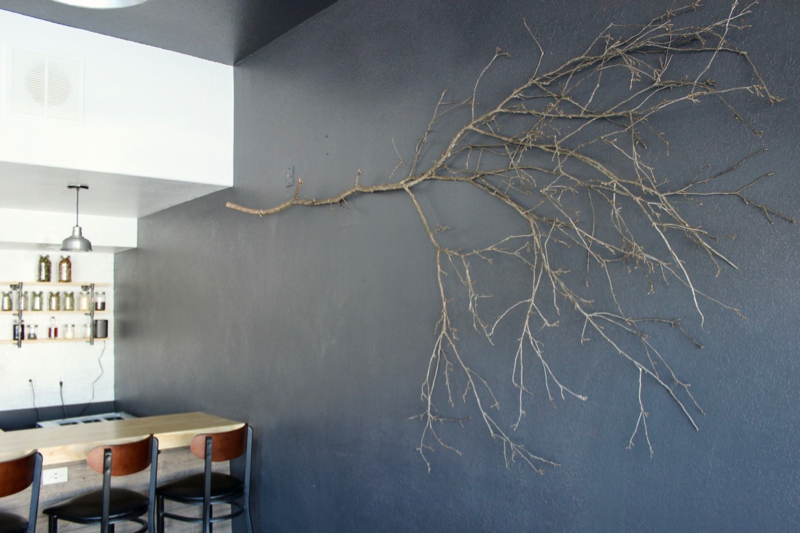 The restaurant, which will seat 52, features a main dining room flanked by expansive windows to the north and a bar and a long wooden banquette on the south. Meanwhile, above the banquette, guests will find a display of rustic cross cut maple rounds gleaned from the De Stefanis property in Shawano County. 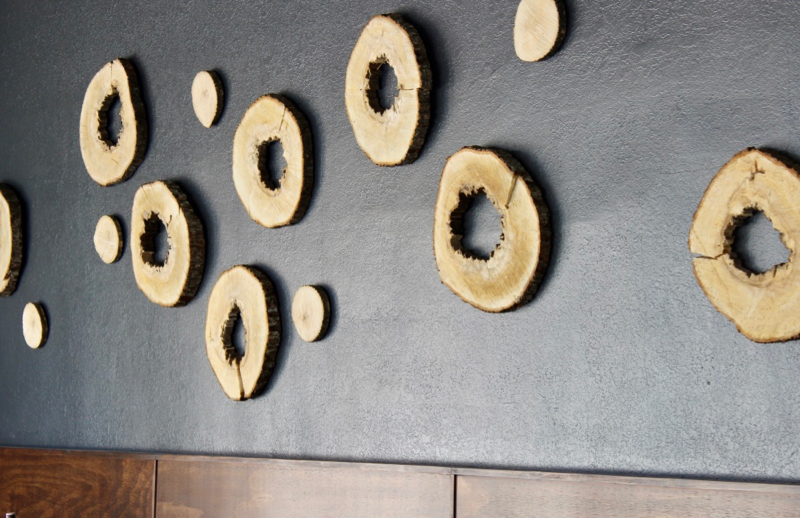 Moving toward the kitchen, deer skull and antler mounts stand out against a green background. Neither are the product of hunting, notes Cao, but rather animals found during hunting and foraging excursions.

In keeping with the partners’ respect for nature and the environment, Cao says the restaurant will operate with sustainable practices in mind, from the use of recyclable straws to composting.

"I’d rather give back to the environment than take away," says Cao. "It’s about being sustainable and conscious. Everything has a purpose."

A key element in the space will be the Chef's Counter, an area of bar-style seating located on the east side of the restaurant in front of the kitchen. The reservation-only seating area will operate much like the remainder of the restaurant, Cao says; however, it will offer guests a bird’s eye view of the latter portion of kitchen operations, plus interaction with the chef.

"It's a place for me to have interactions with guests," says Cao. "They can taste dishes that I'm working on and interesting ingredients we’re working with. I'm envisioning a really intimate dining experience." 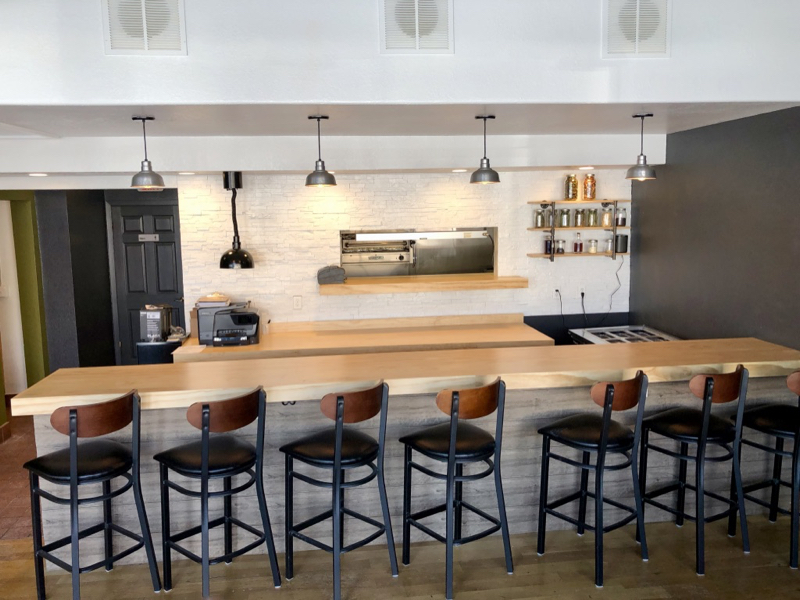 The chef’s counter, which will be available on a first-come, first served basis during lunch and by reservation only for dinner, will also feature an element of Cao’s Vietnamese heritage. Cao says he’ll maintain a jar of rượu thuốc (medicinal spirits), featuring neutral grain spirits infused with roots and spices. It’s likely to be shared with willing guests as a toast to their health.

The dishes at Wild Roots will be constructed on a premise of simplicity, says Cao. Most will contain just a few simple ingredients, each with purpose and intention.

During lunch service at Wild Roots, guests can partake in a menu of soups, vegetables and main dishes including a smashed burger with herbed goat cheese served with lettuce and tomato on a potato roll ($12).

"We’re starting off really simple and approachable," says Cao, "We really want customers to come in and see the sorts of things we do."

Other options include bitter melon soup with tofu and mushrooms ($5), a dish Cao says was inspired by his mother; a grilled boar (ham) sandwich with Gruyere, Dijonaise, mornay and a fried egg served with fries or salad ($14); and egg yolk pappardelle with Muscovy duck confit ragu ($18).

Vegetable dishes will be prevalent, with options like salt roasted beets served with honey goat cheese, nori (for umami), orange, chicory and rye chips ($10); and hummus served with seasonal vegetables, aleppo pepper and housemade flatbread ($10). And the vegetable menu will change often with the seasons, becoming hyper local as the weather warms.

"This is the perfect time for us to open. Spring is coming, and there are so many things that will be available from mushrooms and fiddleheads to wild early season vegetables," says Cao.

There will also be soft drinks, Anodyne coffee, Rishi tea and a a curated selection of bottled and canned beer (including staples like Miller High Life and Pabst Blue Ribbon) and wine by the glass.

Brunch will be a relatively traditional affair featuring bloody marys and mimosas along with drinks like campfire hot chocolate served with a toasted housemade marshmallow. Dishes will include crispy pork belly with grits and eggs ($14); corned beef benedict with hollandaise, spinach and rosemary potatoes ($14) and country fried steak with andouille gravy, garlic kale and potatoes ($16). There will also be playful dishes like French toast coated in Cinnamon Toast Crunch cereal served with cheesecake smear, berries, chopped bacon and pecans ($12).

The dinner menu, which will be available in the upcoming weeks, will feature a variety of wild game, from venison and rabbit to buffalo, oxtail and frogs.

"I’m excited to really have the opportunity to work with some new ingredients," says Cao, "And have the freedom to create dishes that I’ve been thinking about for a long time."

There will also be at least one item featured daily in a section Cao calls "Nasty Bits." The idea is to feature dishes made with ingredients like beef hearts, tongue, sweet breads, oxtails and kidneys.

"There are so many edible things on animals that people are just tossing away," he says. "And we want to put them to good, delicious use."

The menu is an homage of sorts to Anthony Bourdain, a chef whose portrait will also hang in the restaurant near the kitchen. Cao says the photo will be a reminder for him of his responsibility, his craft and his disposition.

"Anthony Bourdain is the champion of all things nasty," he says. "He’s also a champion of travel, experience and not being a tourist. He was a cook’s cook. He also lived a life with issues, and he was open about it. It’s a reminder that you need to focus on being healthy in both your body and mind."

Upon opening, Wild Roots will offer lunch service Tuesday through Friday from 11 a.m. to 2 p.m. and brunch on Saturday and Sunday from 10 a.m. to 2 p.m.

Once introduced, dinner service will take place Tuesday through Saturday from 5 to 10 p.m.