Wisconsinites should "freak out" more often & not just about Old Fashioneds

When Business Insider lifestyle editor Madeline Stone wrote an article about the "revival" of Old Fashioneds - a cocktail she parsed had been "forgotten for almost 50 years" - in bars across the nation, she had no idea she'd strike a nerve with countless Wisconsinites.

When Business Insider lifestyle editor Madeline Stone wrote an article about the "revival" of the Old Fashioned – a cocktail she contended had been "forgotten for almost 50 years" – in bars across the nation, she had no idea she’d strike a nerve with countless Wisconsinites.

"Shortly after publishing time, my inbox started to fill up with emails from a somewhat unexpected place: Wisconsin," she wrote in a follow-up article entitled "I wrote about the Old Fashioned's 'comeback' and a bunch of people from Wisconsin freaked out." In the article, she explains the significance of the cocktail – in its sweet and sour forms – across the state of Wisconsin, as well as acknowledging the drink's unabated popularity. 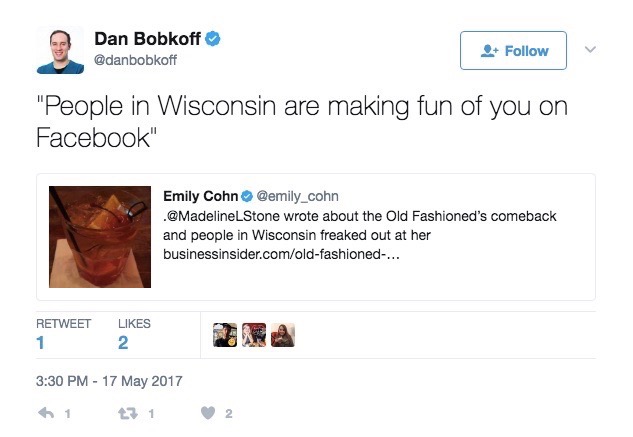 Good on her for owning her mistake and acknowledging (in a sense) that she disregarded one of the state's proud and long-standing traditions.

And kudos to her for calling upon one of Milwaukee's classic cocktail experts, Bryant’s Cocktail Lounge owner, John Dye, who elaborated on the unceasing popularity of the beverage in Wisconsin, even theorizing that it’s possible Angostura Bitters would have gone out of business had it not been for Wisconsinites’ passion for the beloved cocktail. 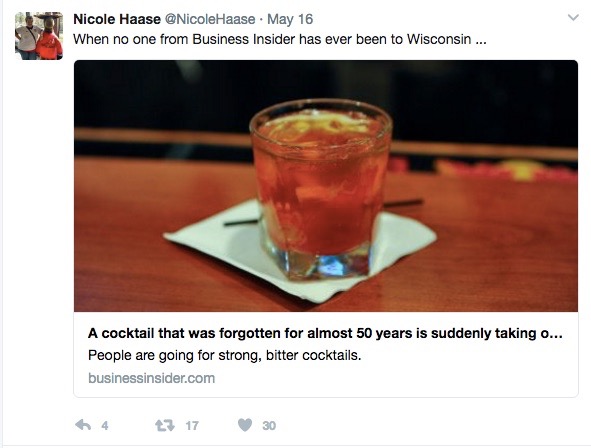 But, I also found myself thinking: What would happen if folks from Wisconsin started calling writers out more often?

What if countless Wisconsinites began objecting to "Best new restaurants" lists that don’t include a single Wisconsin venue, like this one from GQ? Or how about questioning "Best new chefs" lists like this one from Food & Wine? It's pretty amazing how often this happens, and how many writers – even those who consider themselves well-traveled and knowledgeable about food scenes in cities across the U.S. – fail to acknowledge what Wisconsin has to offer.

Wisconsin is no slouch. We grow and produce some of the best food in the nation. In fact, according to data from FAB Wisconsin, we’re the number one producer of not only cheese (a given, right?), but also cranberries, ginseng, carrots and snap peas for processing, dry whey and corn silage. And we’re number two for oats, milk and organic production.

Maybe if we get our undies in a bundle a bit more often people would start paying attention.

I say it's high time we stood up for ourselves and claimed all the things that make Wisconsin (and Milwaukee) great. After all, you can’t be a fly-over zone if you actually give people good reason to land the planes.

Oh, and to all the writers who allege knowledge of what’s trendy and where (like this guy who recommended a restaurant without even visiting): let’s take a look at the Dairy State every now and again, shall we?